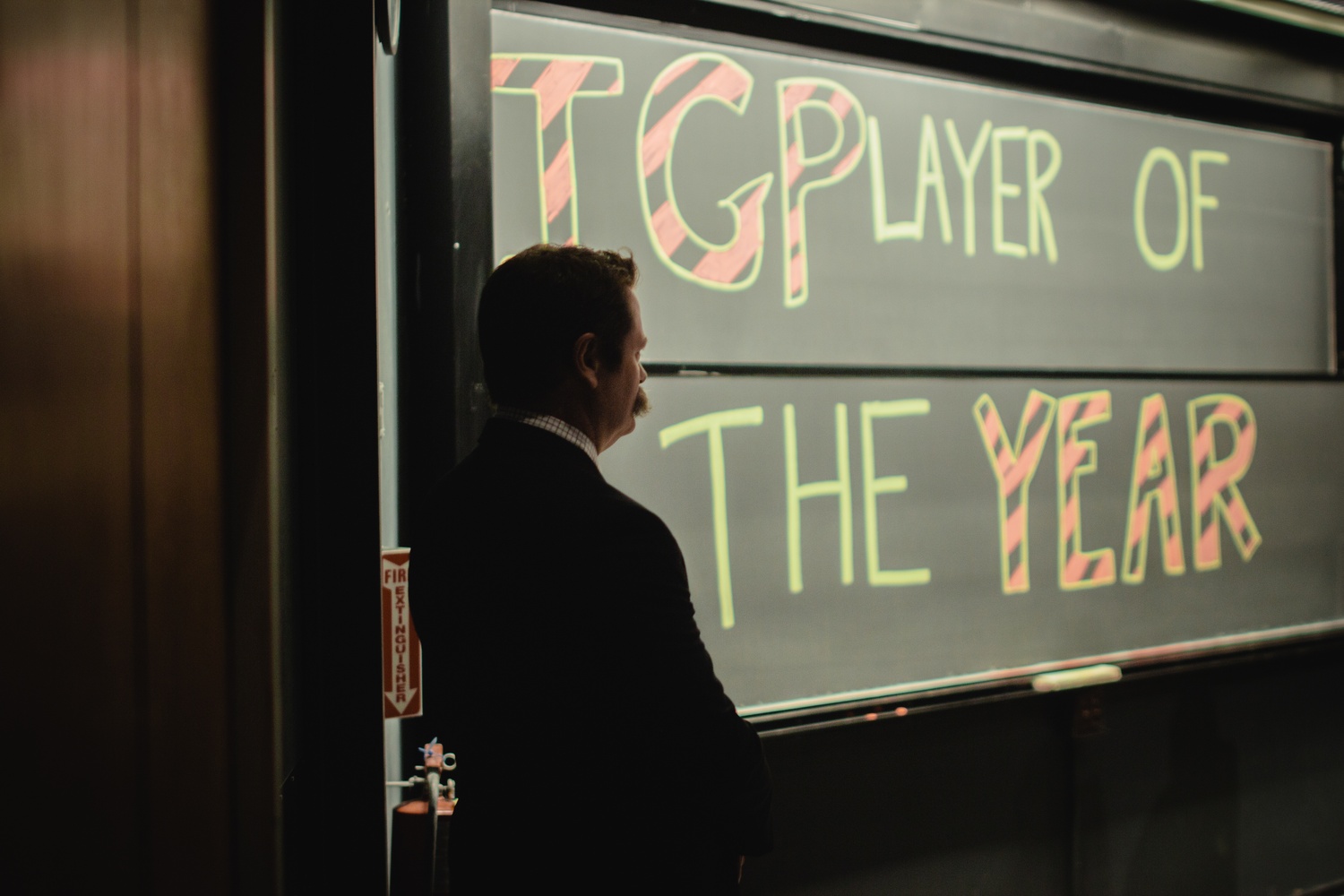 Annually, The Immediate Gratification Players, an improv group, recognizes a comedian by honoring them as the IGP Player of the Year. Nick Offerman follows a legacy of other famous actors, such as Jeff Garlin and, most recently, Keegan-Michael Key. By Lance I. Oppenheim
Advertisement
Advertisement

​It’s 10:30 a.m. on Friday, December 4th, and the Science Center is already mobbed. People sit on fold-up chairs and on the ground. Others lean against the wall. The crowd was for entrance to the IGP’s annual “Player of The Year” show, featuring special guest Nick Offerman.
By Emily H. Choi

It’s 10:30 a.m. on Friday, December 4th, and the Science Center is already mobbed. People sit on fold-up chairs and on the ground. Others lean against the wall. The long line of eager people recalls last week’s Black Friday shopping, when thousands camped outside Best Buys, Targets, and the like for the best deals of the year. But this event was better than any chance at a half-price Sony 48” flat screen TV. The line was for entrance to the IGP’s annual “Player of The Year” show, featuring special guest Nick Offerman. Offerman is best known for his role on the award-winning NBC sitcom “Parks and Rec,” in which he plays Ron Swanson, the indifferent head of the Pawnee Parks and Recreation Department. 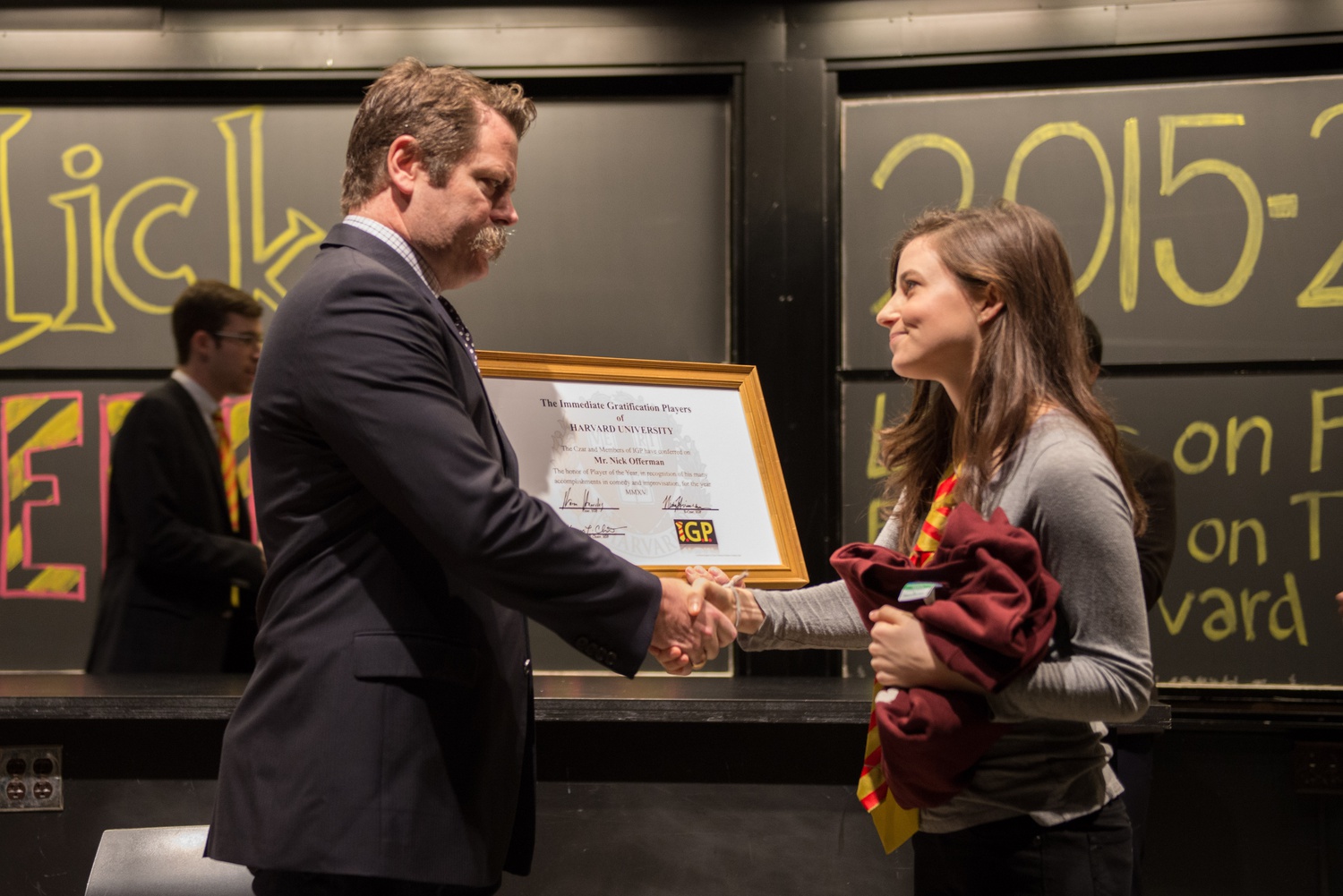 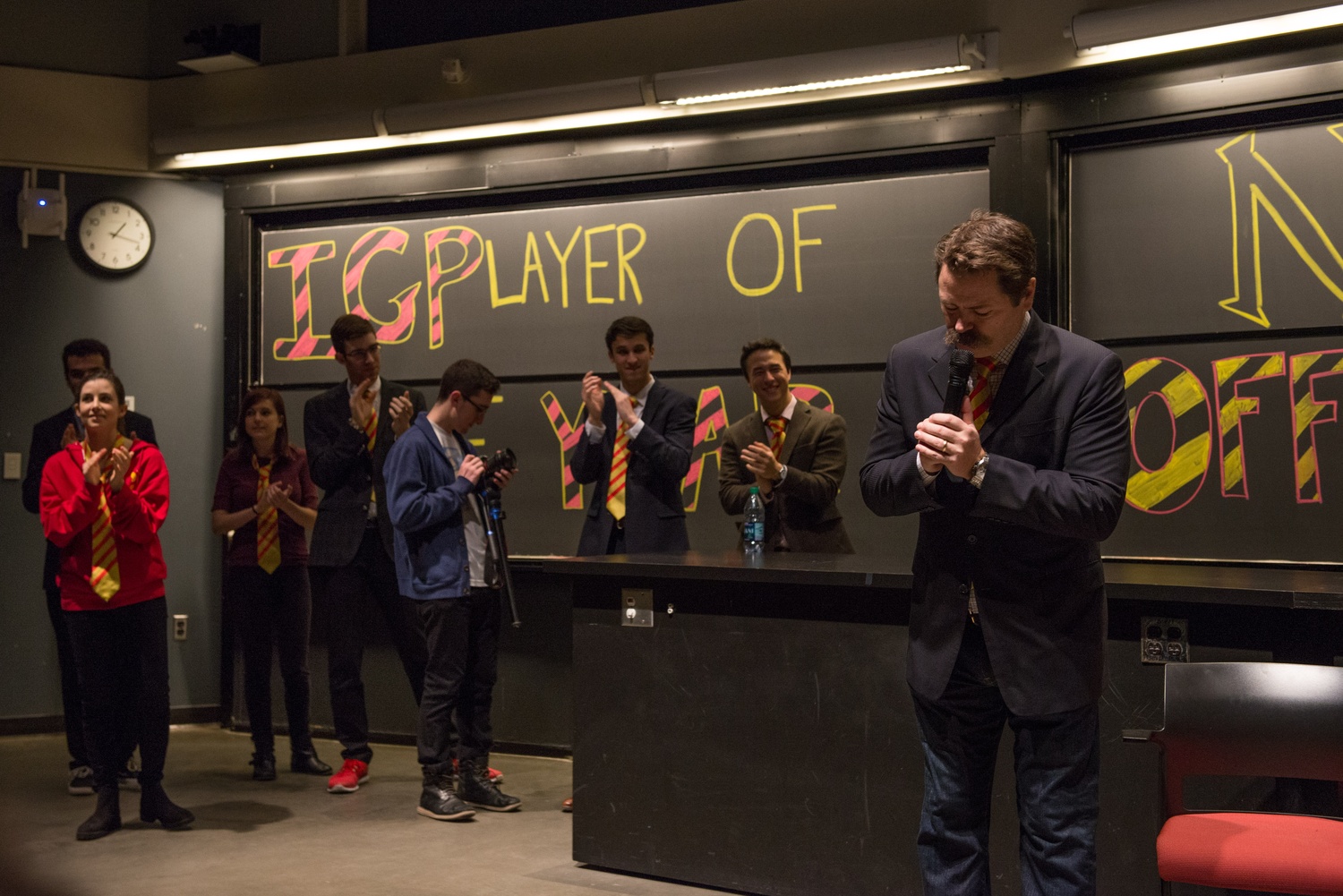 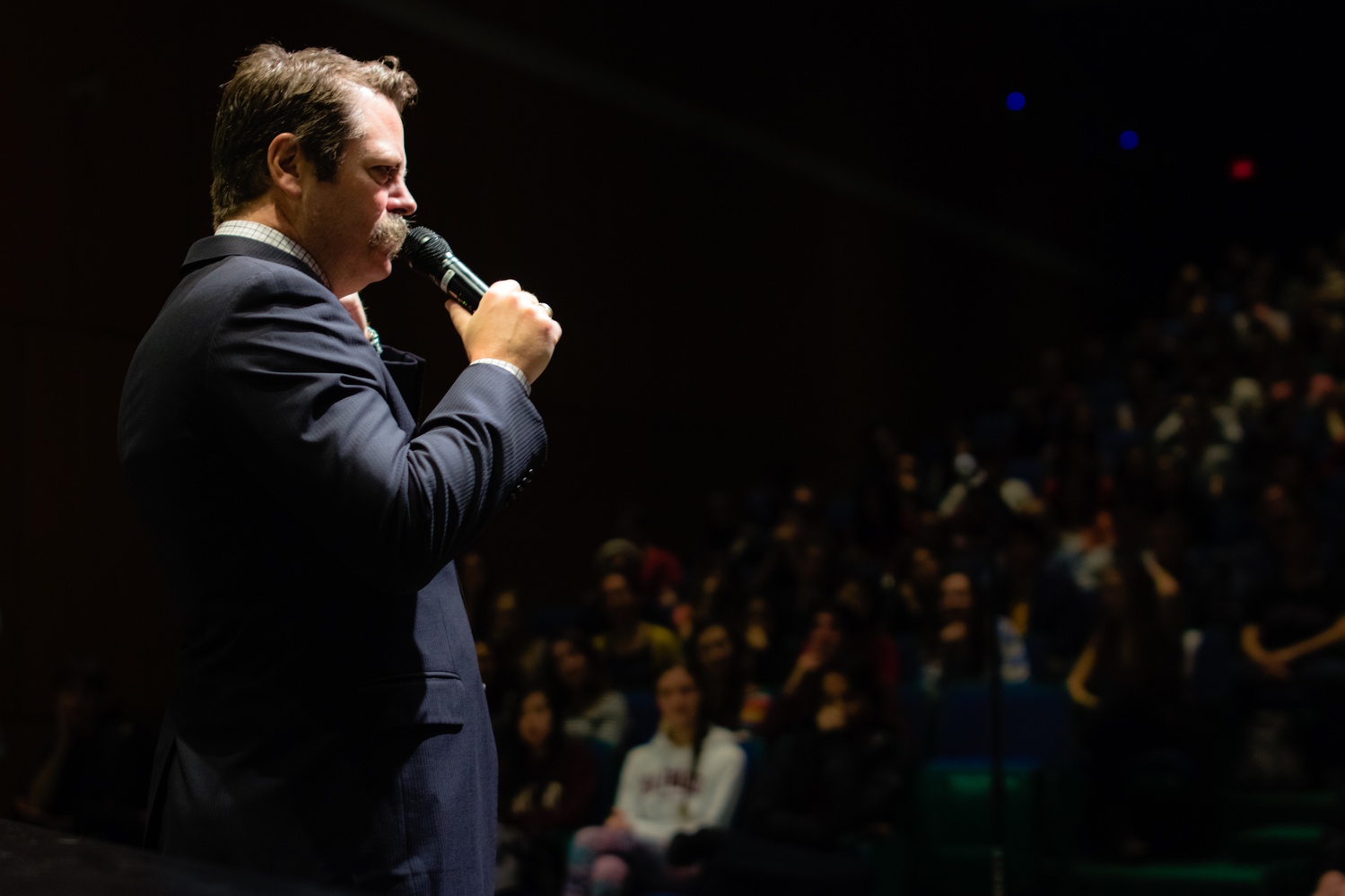 Seeing the Crowd - Nick Offerman looks over the crowd as he performs one of his improv monologues. 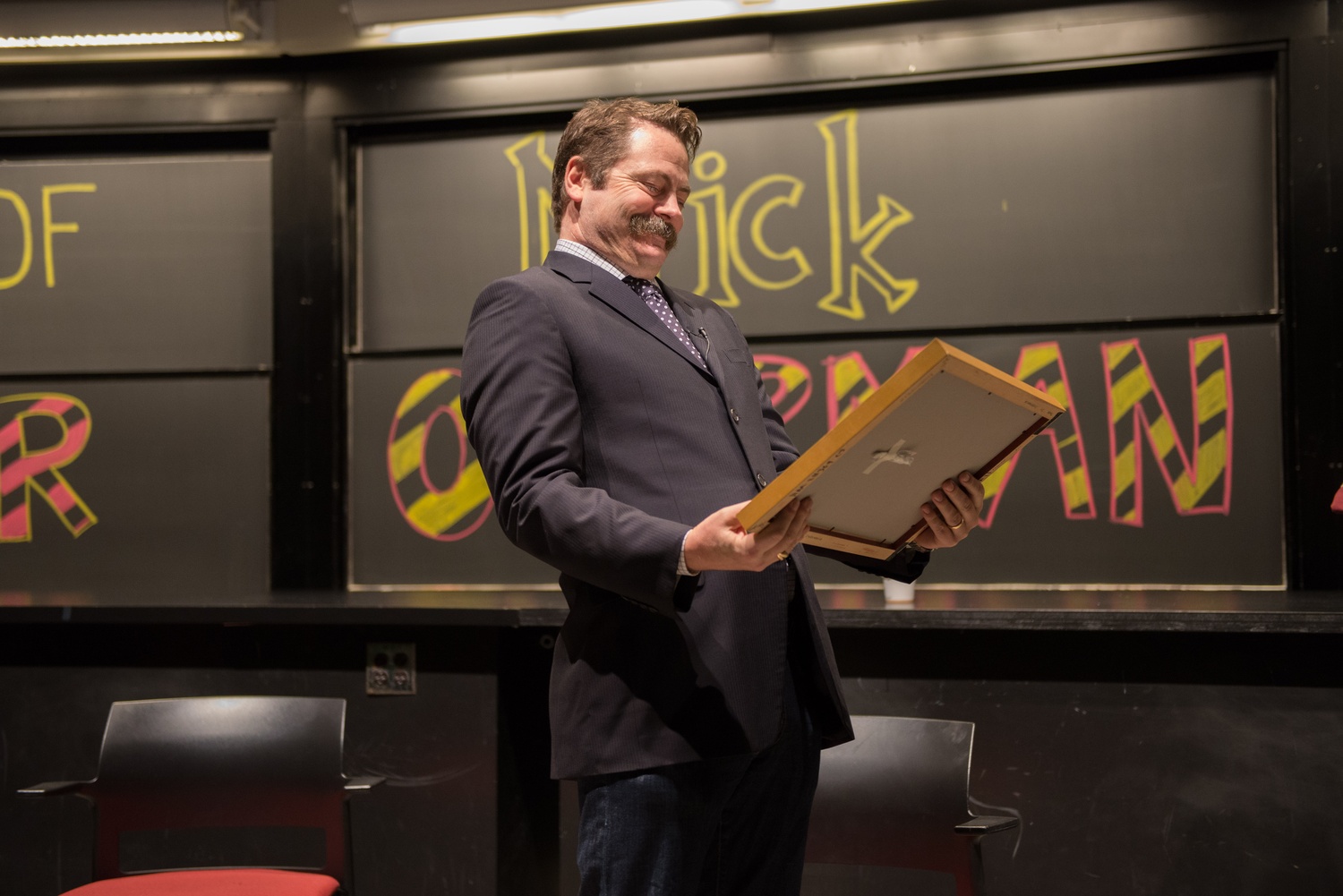 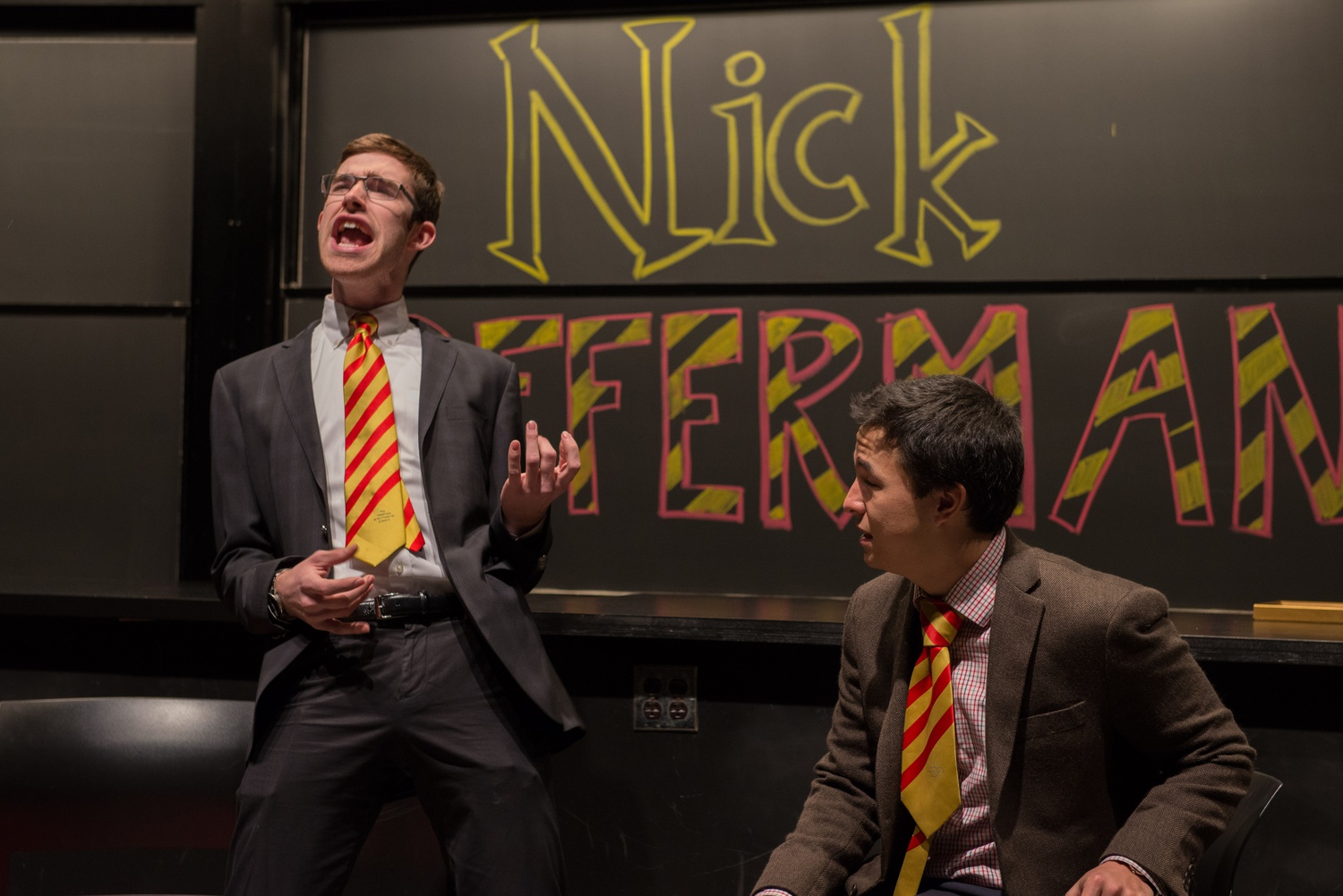 Grant and Adam at IGP - Grant A. Hoechst '18 pantomimes playing a guitar in an improv sketch with Adam S. Wong '17. 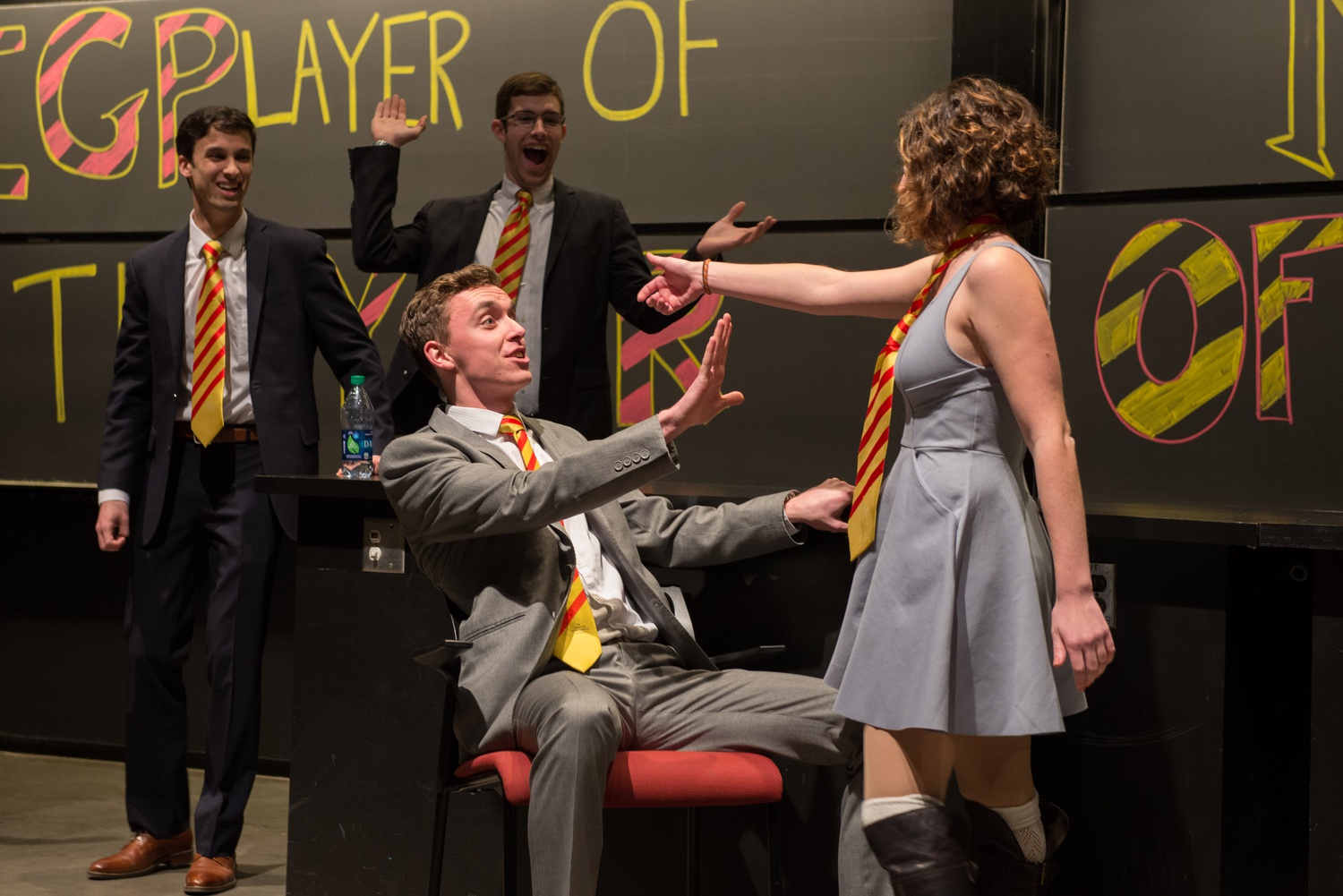 Kira and Mike at IGP - Kira S. Brenner '18 pretends to hold a gun to Mike A. Skerrett's '18 head in a sketch about helicopter moms. 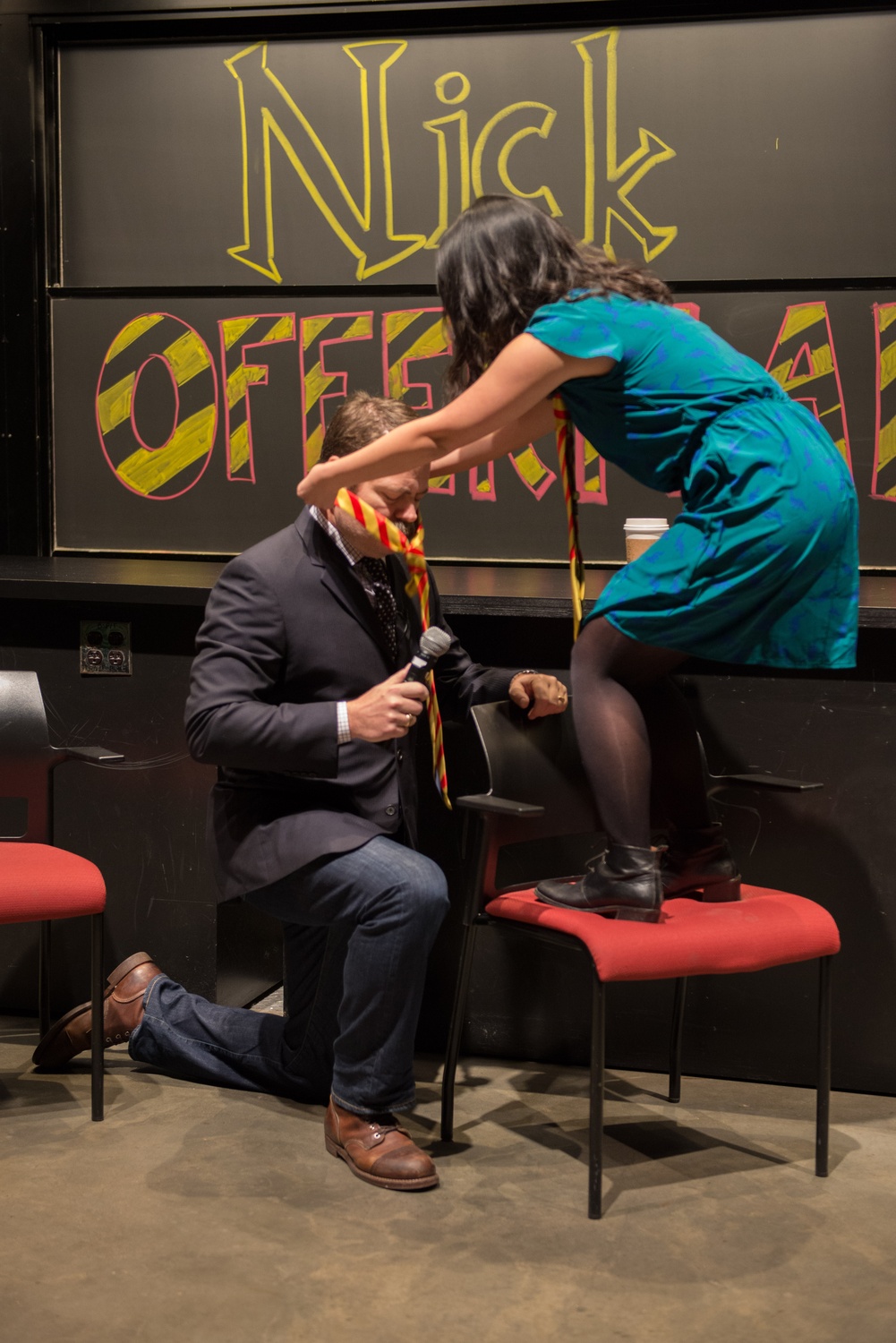 Tieing Nick Down - Karen Chee '17 "knights" Nick Offerman by giving him a red and yellow tie, the signature of IGP. 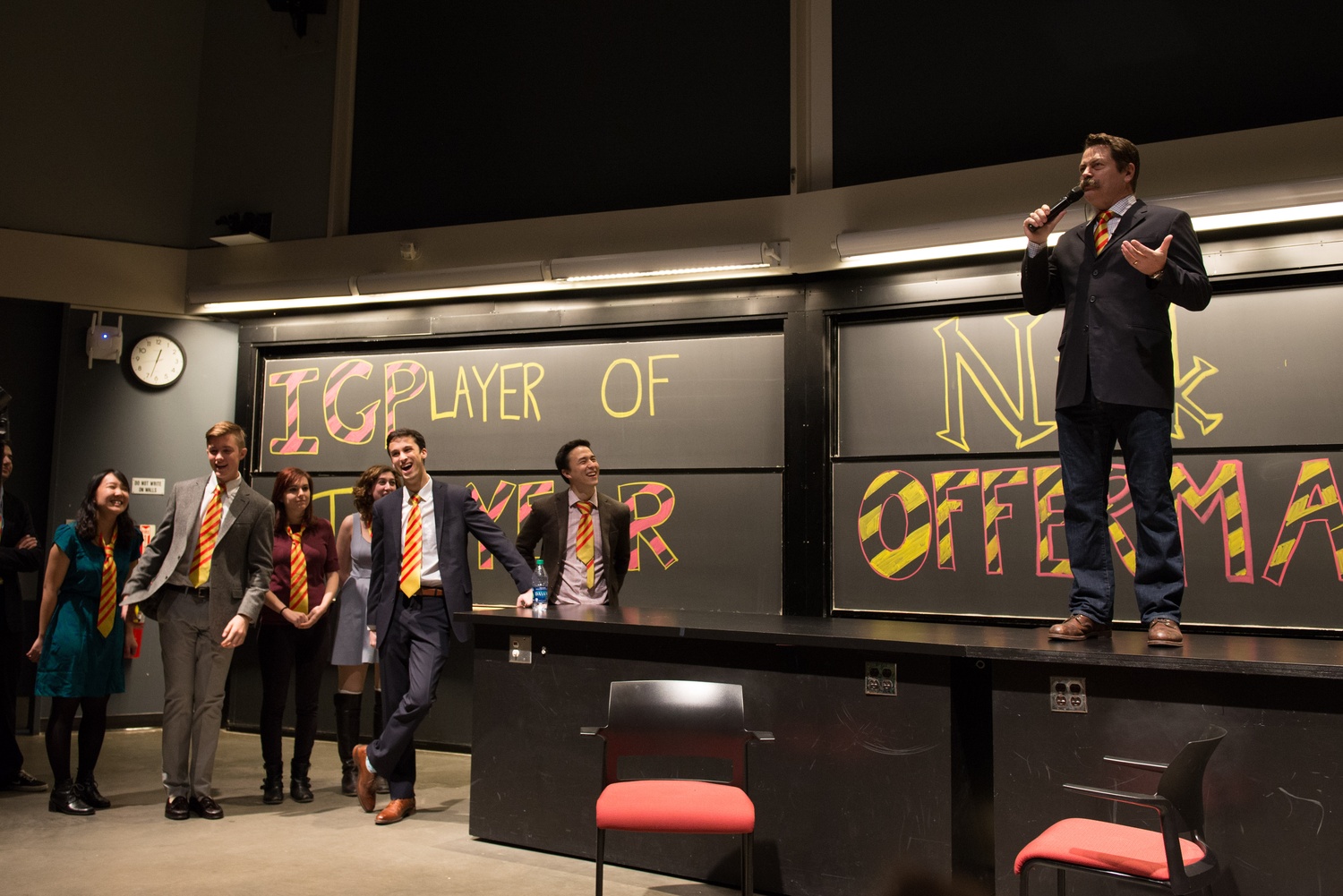 Nick Offerman's Monologue - Nick Offerman improvises a monologue about his childhood during the Player of the Year performance with IGP. 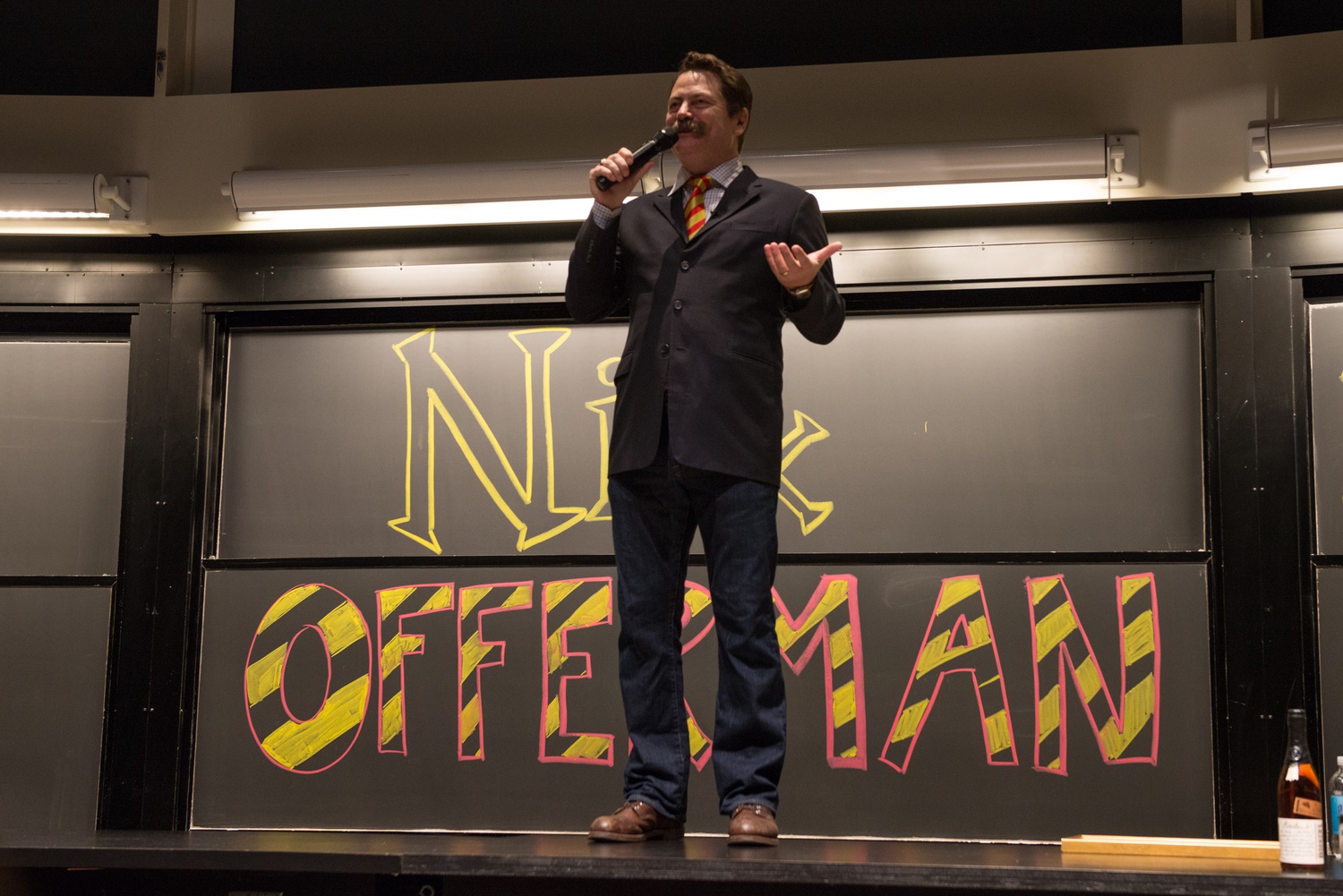 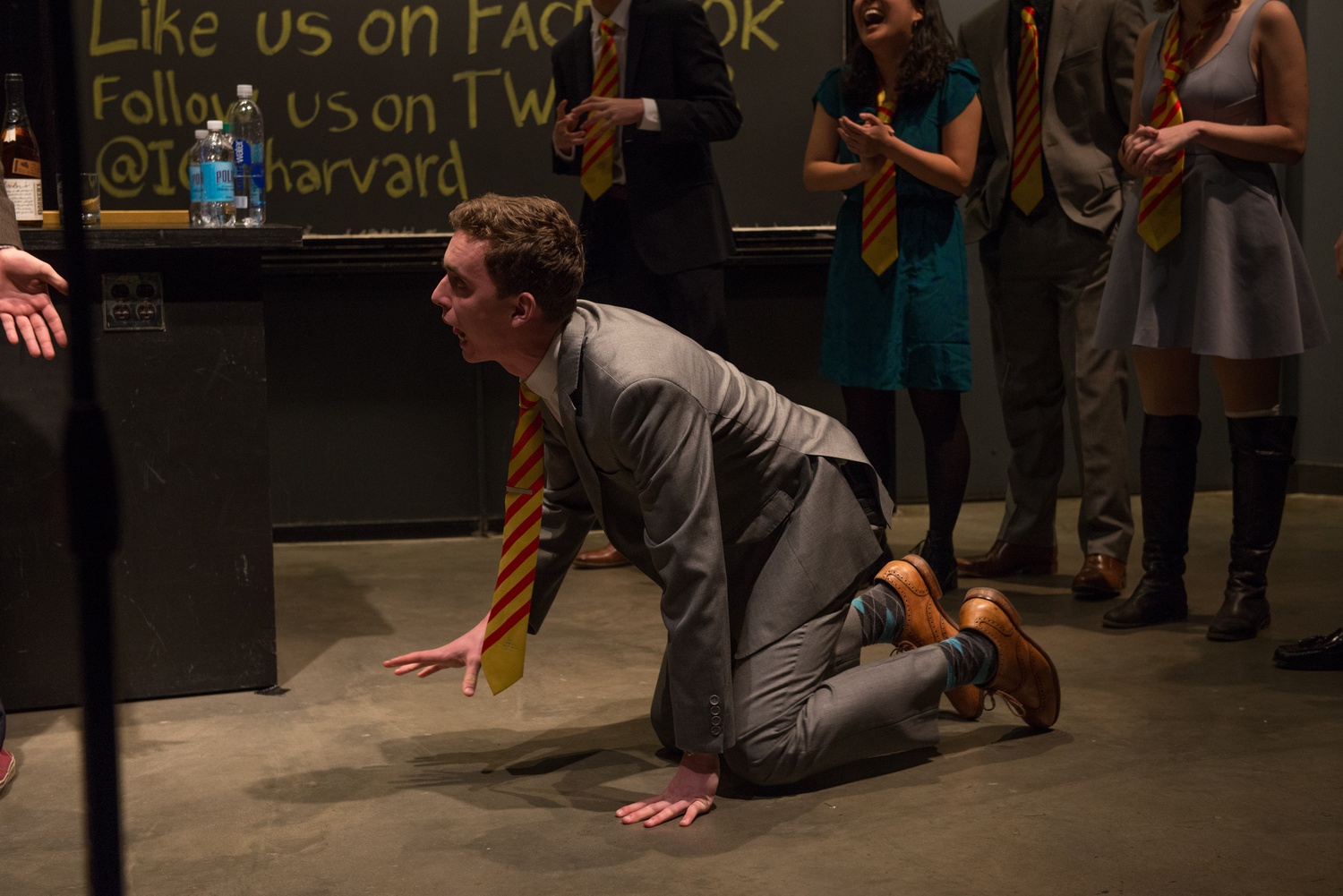 Skerrett Crawls - Skerrett acts as a grotesque, deranged baby in an improv sketch.
true By Lance I. Oppenheim and Alana M Steinberg

When the doors open at 11:40, the audience streams in slowly as the Parks and Rec theme song plays over the speakers. In a matter of minutes, the entirety of Science Center B is filled, no seat unclaimed, with more students standing in the back of the lecture hall. It seems that the audience is eager to see if Mr. Offerman will be as deadpan as his character, Ron Swanson. Rather than a hundred bored and overtired LS1a students, the large space holds at least 300 rowdy students who’ve come to see the IGP work their magic with Offerman.

Around 12:15, the IGP, dressed in their trademark red and yellow-striped ties, emerge from the side door to raucous applause. They introduce their “Player of the Year,” the man of the hour, the illustrious Nick Offerman. Finally, the moment we’ve all been waiting for. Offerman emerges, leaves briefly, and reemerges again, presumably soaking in the huge applause that greets him, although it’s something he’s definitely used to by now. Offerman’s sizeable moustache looks just as impressive in person as it does on TV. Addressing his iconic stache, he says, “Someone asked me earlier if my moustache was real. What the fuck is that? If my moustache wasn’t real, what am I?” He makes a good point.

Karen Chee '17 "knights" Nick Offerman by giving him a red and yellow tie, the signature of IGP. By Alana M Steinberg

The IGP proceeds to present Offerman with a Harvard sweatshirt, a diploma, and a bottle of whiskey, to which Offerman asks, “Is it customary to not jerk off on these items?” Nick Offerman has truly arrived. Finally, the IGP presents Offerman with his very own red and yellow tie. He kneels down as if being knighted, and accepts the tie with marked grace.

Nick Offerman chuckles at his "Harvard Degree" from IGP. By Alana M Steinberg

Offerman turns the attention to the audience, asking for a one word prompt. He hears “potato,” and the IGP begins their act. They perform skits on things like parent-teacher conferences and blind dates set up online. I carefully watch Mr. Offerman as the IGP performs: He stands idly by, casually sipping his coffee. His expression is as stoic and unemotional as ever. He’s the Ron Swanson of our dreams.

After a round of skits, Offerman gets up on the table, talking about an acting program he was enrolled in at his alma mater—the University of Illinois Urbana-Champaign. He has clearly captured the undivided attention of the audience; every time Offerman so much as chuckles, the audience responds with an uproar of laughter.

Nick Offerman improvises a monologue about his childhood during the Player of the Year performance with IGP. By Alana M Steinberg

At some point, there is a noticeable shift in Offerman’s tone. He brings up the recent violence in Paris and the shootings in San Bernardino, CA. “I think humor and music are the two things that can save us from this type of vitriol,” he says. And he asks us, as future leaders, to do something to change this.

Offerman toes the line between humor and seriousness with perfect ease. The audience is silent and contemplative, thinking about the violence and suffering that Offerman has mentioned. He quickly breaks the tension with a well-timed joke.

Of everything that Offerman says, one thing particularly resonates with me. “Everybody’s the same kind of dipshit. We’re all trying to find our asses with both our hands everyday.”

The show begins to draw to a close, and Offerman offers his thanks and gratitude to the audience. Not one to leave without a dramatic exit, he holds up the whisky bottle, as if in triumph, and departs in a flourish.