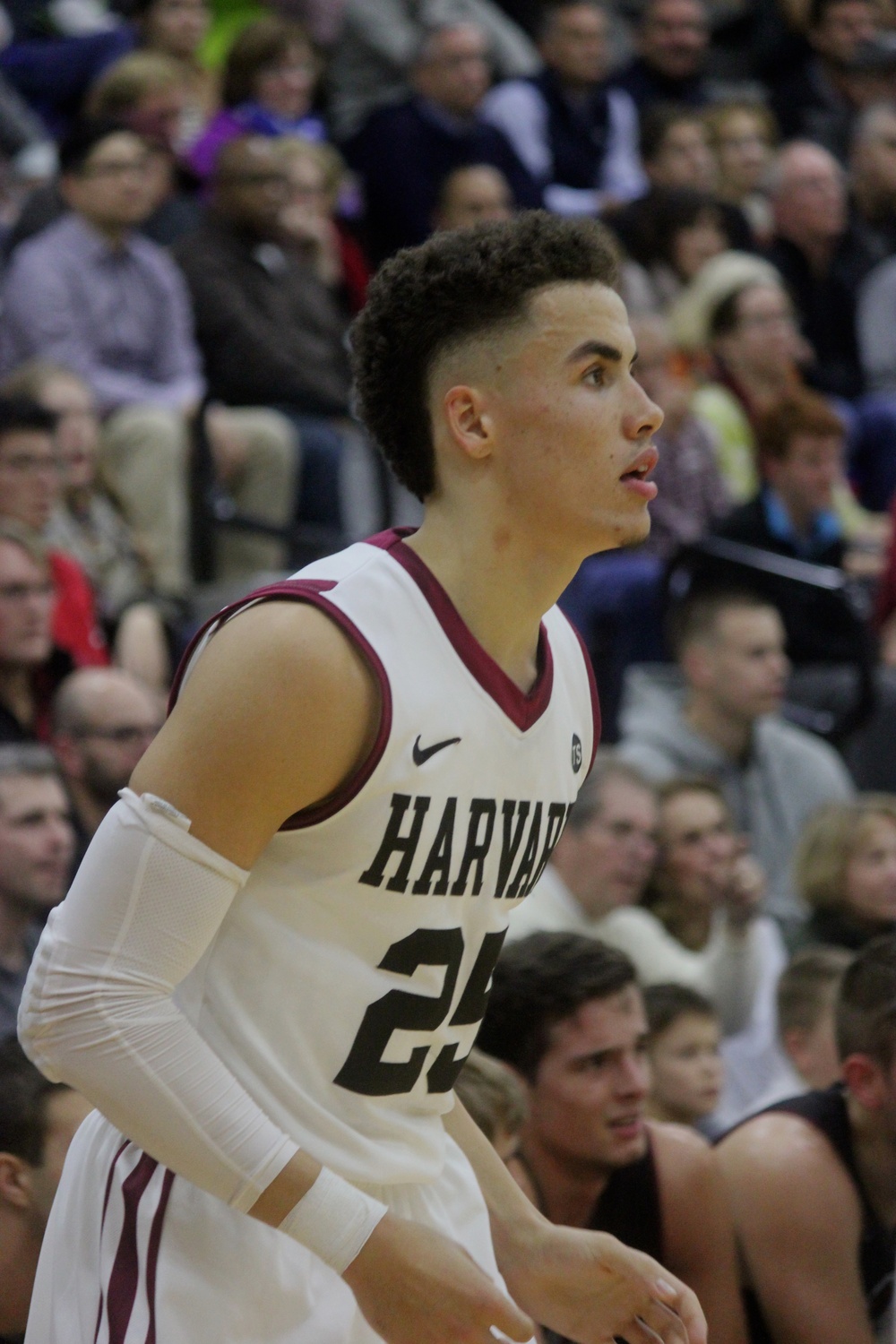 Sophomore guard Corey Johnson looks to build on a promising season and could be the main scoring threat for the Crimson. By Eliza R. Pugh
By Manav Khandelwal, Crimson Staff Writer

“Just having that feeling of putting your country across your chest, and hearing the national anthem for the first time, and playing for something bigger than just yourself, that was huge,” Harvard men’s basketball freshman guard Corey Johnson said.

Johnson is one of a handful of Crimson athletes who represent their respective countries at the competitive international level. The Ontario native has played for Team Canada at the 2014 International Basketball Federation Americas Under-18 Championship, winning silver, and the 2015 FIBA Under-19 World Championship, where his team finished fifth.

Representing the red, white, and blue on the strip, Harvard standout fencer Eli Dershwitz is taking this year off to train for the 2016 Olympics in Rio de Janeiro, Brazil. After claiming first-team All-American and All-Ivy honors last season as a freshman, the Sherborn, Mass., product became the first American fencer to win gold in men’s individual sabre at a Junior World Championship this past April.

“I’d come so close so many different times,” Dershwitz said. “It was really nice to work really hard and come up with a big win…. Those type of moments boost your confidence to the level where you think that if you train really hard, you can reach any level possible.”

Like Dershwitz, women’s soccer central defender Marie Becker won the biggest trophy of them all at the junior level, capturing the 2014 FIFA Under-20 Women’s World Cup with the German national team. The sophomore was part of a Die Nationalelf side that went unbeaten on its way to becoming tournament champions.

“Winning a World Cup is a very surreal experience,” Becker said. “It’s not something you’d ever plan, ‘Hey, next year I’m going to win a World Cup.’ You go into the tournament, you win a game, then you win another game, and then you’re there, and you can’t really grasp it.”

Competing at the international level was, almost exclusively, a positive experience for the trio. Johnson, who received only a single Division I offer heading into his first summer with Team Canada, said he benefitted greatly from the opportunity to play with and against the top young players in the world. It even convinced him to take a post-graduate year at Vermont Academy, during which schools like Harvard and Butler invited him to join their respective programs.

“From when I was at the tournament, a lot of scouts were watching and ESPN guys on Twitter were talking about me,” Johnson said. “That got my name out there, so a lot of people started asking questions about me. My coach also helped a lot with that.”

The 6’5”, 200-pound guard also developed greatly during his two summers playing under head coach Roy Rana, breaking out of his traditional role as his team’s knockdown shooter and emerging as more of a combo guard.

“I feel like I expanded my game from being more than just a shooter,” Johnson said. “I want to be a communicator and leader on the floor…. [Playing for Canada] really excelled my game to a whole other level, understanding basketball better and learning to play off the ball.”

Becker, who started 16 games for the Crimson on her way to an All-Ivy honorable mention selection, helped Germany advance to the semifinals of the U-19 European Championships in the summer of 2013. She said she has observed tactical differences between the international and college games, nuances that have made her a more versatile and aware defender.

Primary among those differences is the focus on direct play from the back in the collegiate setting. Because teams only have three substitutions at the international level, attacking players have to conserve their energy and cannot press the center backs relentlessly. This allows teams to build out patiently from the back.

“Playing with Germany was definitely a lot, lot more possession,” Becker said. “Long balls from the back line were more rare, whereas it’s more common to do that here. At Harvard, we’re very capable of playing the possession game, but we just don’t do it that much.”

Becker said she credits her time at the international level with her personal development; she represented the German Football Association from the U-17 to U-20 levels. This experience helped make her a reliable center back for the Crimson.

“Playing among and against the best players in the world of my age group is an experience that does not leave you untouched,” Becker said. “I definitely learned a lot, to play under high pressure, at a high speed, and under very elaborate tactical conditions. I think I can contribute some of those experiences to [Harvard’s] team.”

Dershwitz, like a number of prospective Harvard Olympians before him, is taking time between his freshman and sophomore years to train full-time for the upcoming Summer Olympics, participating in qualifying tournaments along the way. He has represented Team USA at various levels since 2010, winning his first gold medal at the 2010 Cadet World Cup in Goppingen, Germany.

After 14 first place finishes across various junior tournaments, Dershwitz joined the Crimson men’s saber team in the fall of 2014 with high expectations. Having trained with current national team coach Zoran Tulum since the age of 10, Dershwitz did not disappoint. He went 15-0 at the Ivy League Round Robins, helping Harvard capture the Ancient Eight title.

“It was really fun,” Dershwitz said of his college fencing experience. “It was different coming from a purely individual sport to being part of a larger team. It wasn’t really something I was prepared for. I was used to either winning or losing by myself.”

Following his exploits for the Crimson, Dershwitz capped off his campaign with a run of gold medals for Team USA. Apart from the aforementioned gold at the Junior World Championships, he claimed the top spot at the recent Junior World Cup. He was also part of a Team Sabre squad that won gold at the 2015 Senior Fencing World Cup in Tbilisi, Georgia.

“When I win, I get to feel great because I know that it was my hard work and my dedication,” Dershwitz said. “When I lose, it’s on me and there are things I can work on and improve. That constant process of improvement, getting success, changing things up, getting more success has really been one of the huge aspects of the sport that’s kept me going.”

Dershwitz has had a strong start to his qualifying campaign, boosted in the standings by the world championships victory last summer. He has just four tournaments remaining to book his ticket to Rio, with the home stretch beginning in Boston at the FIE Grand Prix, where he finished in the top 25.

For these athletes who have suited up for the Crimson while or after representing their countries, experience at the international level has helped make them invaluable members of their respective teams. Most of all, the opportunity to wear their flag across their chests has been one they will likely never forget.

Staff writer Manav Khandelwal can be reached at manavkhandelwal@college.harvard.edu.