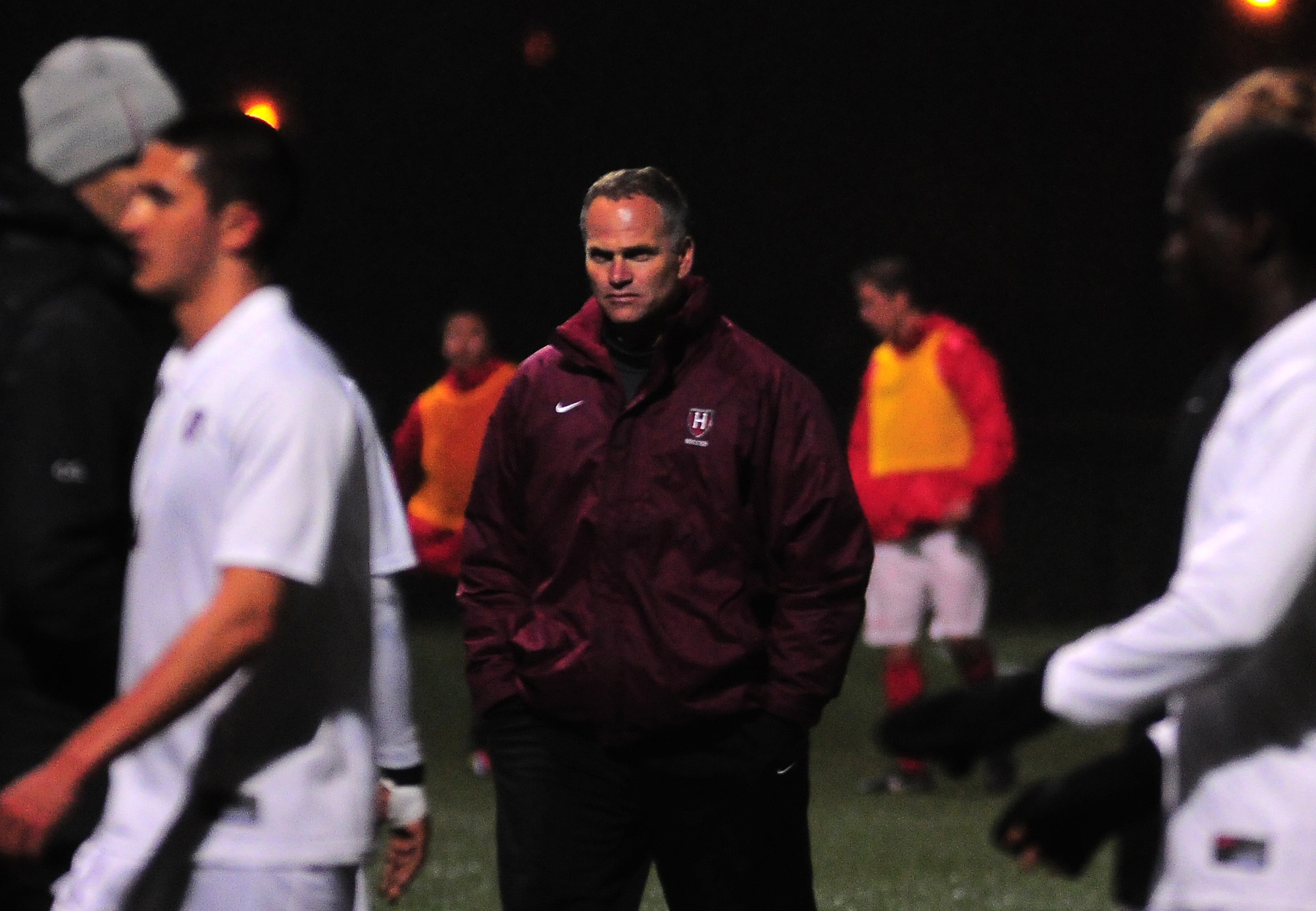 ­As soon as the final whistle sounded in Harvard’s 6-0 win over Penn on Nov. 14, Crimson men’s soccer coach Pieter Lehrer began thinking ahead to his team’s next game.

But he wasn’t looking ahead to the next week, or even the next month. Rather, he had his sights set on next September.

Lehrer isn’t one to dwell on the past or even recent successes for too long. Despite the fact that his team finished the 2015 season with a flourish, it will be business as usual when he returns to the office. Though Lehrer must bid farewell to his largest senior class since joining the Crimson–and find a way to replace each departing player–it will be just like any other offseason for him.

It is also the same one that the Harvard men’s soccer program now lives by.

Ross Friedman, a captain during Lehrer’s first year in charge of the team, recognized the potential benefits of the UCLA grad’s methods right away. Despite spending just one of his four collegiate seasons with Lehrer, Friedman continues to call him every week.

“Everything is an ongoing process for Pieter, not just on the field but off it as well,” Friedman explained. “He always used to ask us, ‘How’s your process?’ about everything – about what we were doing at practice, about how our classwork was going.”

The results of Lehrer’s “process” speak for themselves. The Crimson has secured three top-three finishes in the Ivy League in as many years with him at the helm. The two years before, the team had gone winless in conference play and finished dead last in both seasons.

The biggest change Lehrer implemented upon arriving in Cambridge was not on the field, but, rather, off of it.

“One thing that still sticks out in my mind about Pieter is how he changed the atmosphere around the team,” Friedman recalled. “It was a pretty tough culture to play in before he got here, but he was able to turn that into something positive, not just with how [the players] treated each other on the field, but also in the locker room, dorm rooms, classrooms.”

While his new players might have been surprised with the transition, these quick improvements were exactly what Lehrer had come to expect in all facets of his life.

Even for those who are familiar with him and his ”process,” it is still astonishing to recount one particular accomplishment, which he made not on

the field, but in the water.

After his soccer career abroad stalled, Lehrer returned to the States with a new goal in mind.

“I knew my time in Europe was over,” Lehrer remembered. “No team wanted to sign me, and I was back home in the spring of ’94. I could’ve went into business, or coaching, but there was one thing I wanted to do more than anything else – make the Olympics.”

It was an idea Lehrer, his brother Jacob, and his sister Heidi had toyed with since their childhoods, and one they decided to take a final shot at.

But it was 1994, halfway through the Olympic training cycle, and the three siblings didn’t want to wait six years.

The Lehrers looked through their options for sports to compete in, trying to find one in which they could train to an Olympic level in less than two years. They ultimately chose sprint canoeing, deciding to compete for Antigua and Barbuda. Then, the real work began.

Luckily for the siblings, however, they were coached by the best. It wasn’t easy to find Andy Toro, who they came across after meeting with fifteen other coaches. In Toro, Lehrer also found a man he would look up to for the rest of his life.

“[Toro] was the US national team coach at the time, the best in the business, and we asked him to train us.” Lehrer said. “We’d never been in a boat like that before, but we got in and he worked and worked at us.”

The three athletes, however, never doubted that they would reach their goal.

“He believed in us, but he told us directly that the chances we would make the team were very slim.” Lehrer recalled. “We just said to him, ‘You do your thing, and we’ll do ours.’”

In the end, Toro kept coaching, and the Lehrers kept paddling all the way to qualifying for the 1996 Olympics.

In typical fashion for the three siblings, nothing came easy.

They squandered their best opportunity to qualify when they wrecked their canoe at the 1995 Pan-American Games.

By coming back to post their best-ever performance at the World Championships, however, the Lehrers saw their Olympic dream come to fruition.

Though injuries prevented the siblings from competing in the Olympics the next year, the lessons Lehrer learned from Toro during their time together have proved more valuable than the accolades.

“There’s one thing he always told me – ‘We’ll train every day like it’s the championship, and during the championship, we’ll race like it’s every day.’” Lehrer said. “For me, that’s a way of living. It’s not about the moment, the qualifications, the Olympics; it’s about what you’re doing every day.”

These axioms are now the basis of Lehrer’s “process,” and the people who play and coach under him have all bought in.

When Friedman returned to Cambridge for alumni weekend this fall, he stopped by the team’s practice to see how the Crimson is doing now that most of the players have had multiple years of experience under Lehrer’s lead.

What he found was surprising, but at the same time, made complete sense.

“I expected to see Pieter micromanaging, but he was standing off a little, watching. What he used to do, I saw the seniors doing now,” Friedman said. “And that’s remarkable, how the players are able to understand how to run a practice, how to take the lead and make important decisions just as Pieter would.”

For Lehrer, seeing this growth in his players is what his job is all about. His goal is not to be the best soccer coach, but rather the best mentor he can be.

Thus, as he sees his largest-ever class of seniors leave campus this year, Lehrer isn’t disappointed to see them go. Each graduate is another person who will apply his “process” to pursuing new goals and accomplishments after their soccer careers end.

Chances are, just like Friedman, they’ll be back to tell their coach how it goes.

—Staff Writer George Hu can be reached at yianshenhu@college.harvard.edu.

A previous version of this article featured a photo with a caption incorrectly identifying the individual in the photo as Pieter Lehrer.