Funding from federal sources decreased by about $31 million to $577.5 million in fiscal year 2015 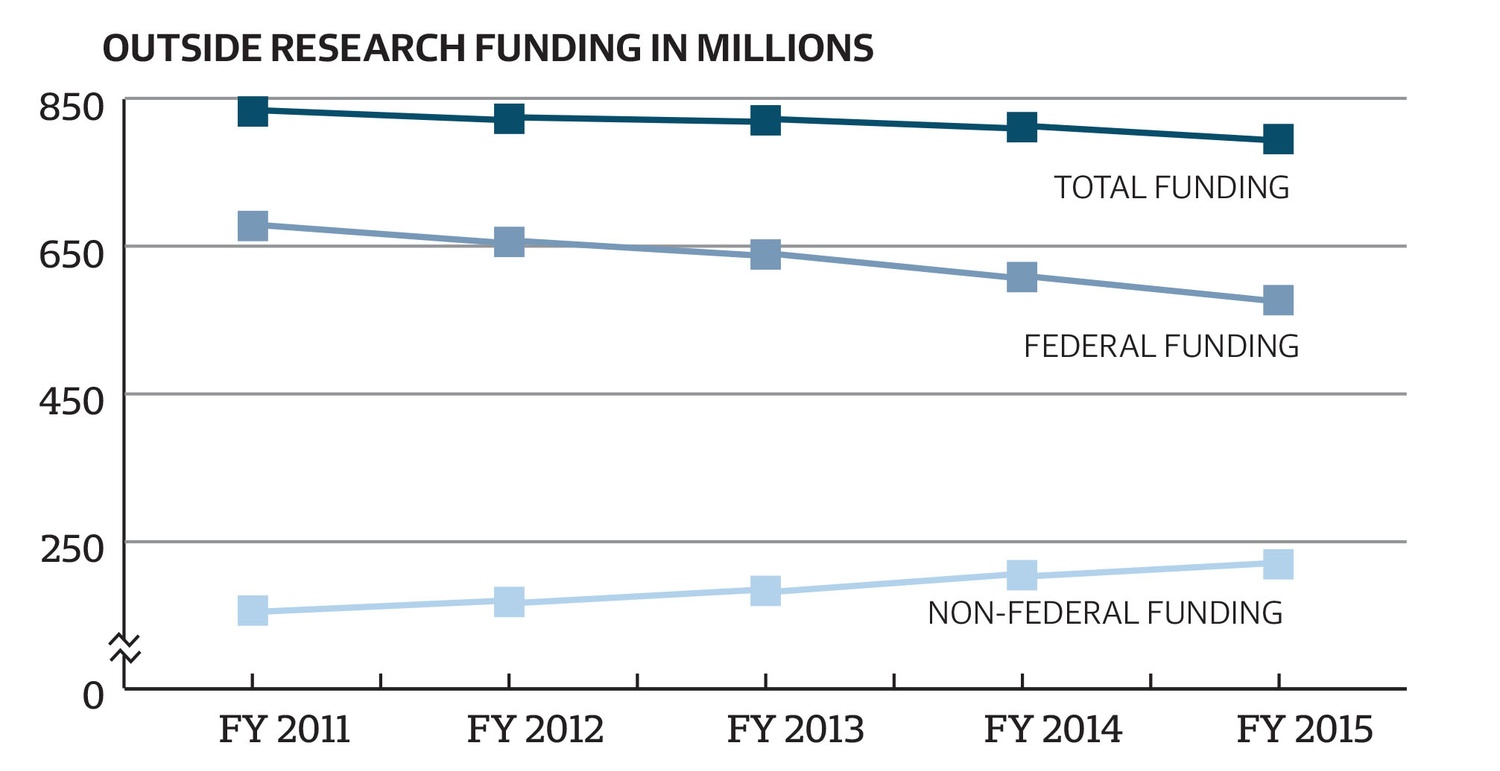 A recent report from the University’s Office for Sponsored Programs says that Harvard received less than $800 million from outside sources to fund research in the 2015 fiscal year for the first time since 2010, continuing a years-long decline. By Jessica M. Zhu
By Meg P. Bernhard, Crimson Staff Writer

Outside funding sources gave Harvard less than $800 million to fund research in the 2015 fiscal year for the first time since 2010, continuing a years-long decline, according to a recent report from the University’s Office for Sponsored Programs.

Research money that Harvard received from federal and non-federal sources combined fell by about $16 million, or 2 percent, to $795.7 million in the last fiscal year, according to the report released last month.

The report attributed $11 million of the $16 million decrease to the end of Harvard’s funding through the 2009 American Recovery and Reinvestment Act, also known as the stimulus. According to the report, Harvard faculty received $245 million from the program and spent that money between fiscal years 2010 and 2015.

The report also details the state of Harvard’s research funding in the second full fiscal year of the federal government’s wide-ranging budget cuts known collectively as sequestration. Those cuts, enacted in March 2013, look to progressively trim a total of more than $1 trillion from federal programs over a decade.

Harvard has lobbied against such cuts, arguing that investing in research funding is critical. University President Drew G. Faust has repeatedly cautioned against sequestration and its impact on institutions of higher education; she dedicated her 2013 Commencement address to the subject.

As those cuts continued, funding from federal sources decreased by about $31 million, or 5 percent, to $577.5 million in fiscal year 2015, according to the report.

The Department of Health and Human Services, which includes the National Institutes of Health, was Harvard’s largest source of federal funding, giving the University $424.4 million. Its contributions have steadily declined over the past few years.

As federal funding continued to decline, Harvard saw an increase in research funding from non-federal outside sources in fiscal year 2015, by about 7 percent, bringing the total to $218.3 million.

The increase in non-federal funding, which represents money from foundations, research institutes, hospitals, universities, and other nonprofit organizations, follows a four-year trend. The Bill and Melinda Gates Foundation remains Harvard research’s largest non-federal sponsor by a “large margin,” according to the report.

Of the 10 Harvard schools that the report said have “active research projects,” Harvard Medical School and the School of Public Health together accounted for more than half of all research proposal submissions.

Harvard professors have previously voiced their concerns with the effects sequestration would have on their research, suggesting that the decrease in federal funding could prompt them to spend more time writing proposals for non-federal grants and less time actually conducting research.

In light of the downward trend of federal funding, Faculty of Arts and Sciences Dean Michael D. Smith said said the school has worked “very hard” so that professors can obtain research funding from sources such as corporations and foundations.

“It has been a purposeful approach to say that the environment out there is changing and we need to adapt some of our processes and help our faculty to continue to do the amazing work they do,” Smith said.

Smith said administrators in FAS, Harvard’s flagship faculty, are also looking to generate more internal funding for faculty research, such as from alumni.

Harvard’s ongoing capital campaign will support, among other priorities, faculty research. FAS’s portion of the University-wide fundraising drive has a public goal of $2.5 billion, and as of September, it had already raised $2.2 billion. About $541 million of that went toward a campaign priority devoted to professorships, fellowships, and research.