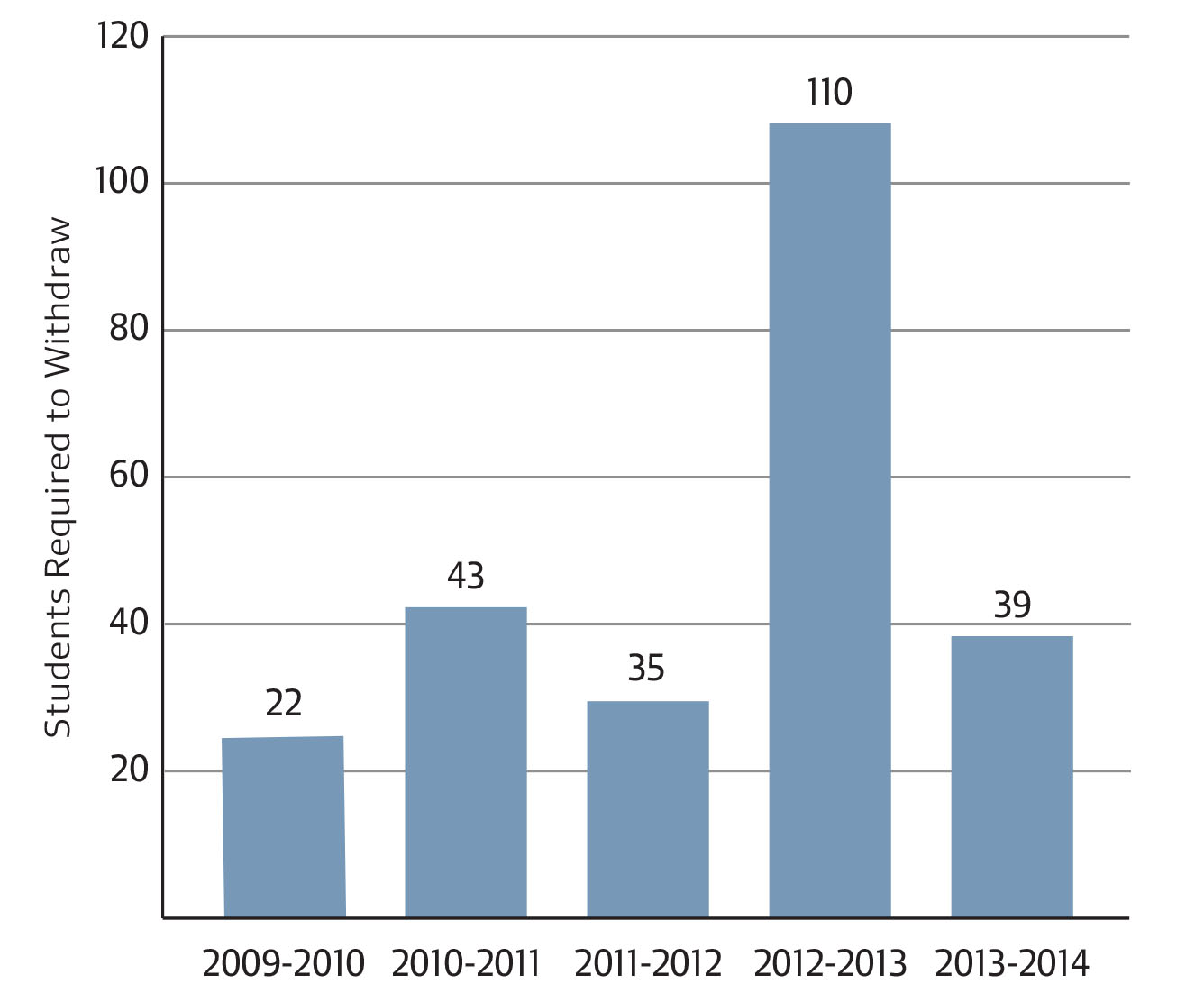 The College's Administrative Board required 39 undergraduates to temporarily withdraw from the College in disciplinary cases last year.
By Noah J. Delwiche and Ivan B. K. Levingston, Crimson Staff Writers

The Administrative Board required five undergraduates to temporarily withdraw from the College in the 2013-2014 academic year in disciplinary cases related to sexual “social behavior,” the highest number in at least the last five years, according to caseload data released by the College’s chief disciplinary body.

The College's Administrative Board required 39 undergraduates to temporarily withdraw from the College in disciplinary cases last year. By Derek K. Choi

In total, the Ad Board required 39 undergraduates to temporarily withdraw from the College in 2013-2014, according to the statistics, a decrease from 2012-2013, when the Board made 110 students withdraw in the same year that it adjudicated Harvard’s largest cheating scandal in recent memory.

The 2013-2014 statistics are the most recent caseload numbers available on the Ad Board’s website. The data break down the Board’s caseload into broad categories, including academic dishonesty, “social behavior,” and “social behavior - sexual.”

The five withdrawal mandates listed under the sexual behavior subheading last year was a five-year high, up from two cases in 2012-2013.

Of the required withdrawal disciplinary decisions, 23 were related to academic dishonesty, a steep decline from the 97 students who were required to withdraw for cheating in the previous year, roughly 70 of whom were implicated in the Government 1310 cheating case.

Overall, the Ad Board issued 233 disciplinary votes last academic year, a number significantly smaller than 2012-2013, when it voted on 355 infractions.

The number of “House warnings” that the Ad Board issued continued a downward trend last year, dropping to 56 warnings from 74 the previous academic year.

In general, the bulk of the Ad Board’s caseload is spent hearing petitions, such as approving requests to activate advanced standing. The Ad Board voted on 1,567 academic petitions in 2013-2014, the highest number in the last five years.

Although the Ad Board provides a summary of its five-year caseload and decisions on its website, in 2010 administrators said they would create a more detailed database summarizing cases in an effort to increase the Board’s transparency. The database would include anonymous details of individual decisions in previous years. Despite the initial pledge, however, the Ad Board has yet to release that database, citing delays stemming from concerns over privacy at various times over the past few years.

Interim Secretary of the Ad Board Brett Flehinger could not be reached for comment.

This current academic year marks the last that the Ad Board will hear cheating cases, as the upcoming implementation of the College’s first honor code will establish a new student-faculty body, called the Honor Council, to hear alleged infractions. And already, the Ad Board no longer investigates sexual harassment cases; the University’s central Office for Sexual and Gender-Based Dispute Resolution now investigates complaints while the Ad Board hands down sanctions.