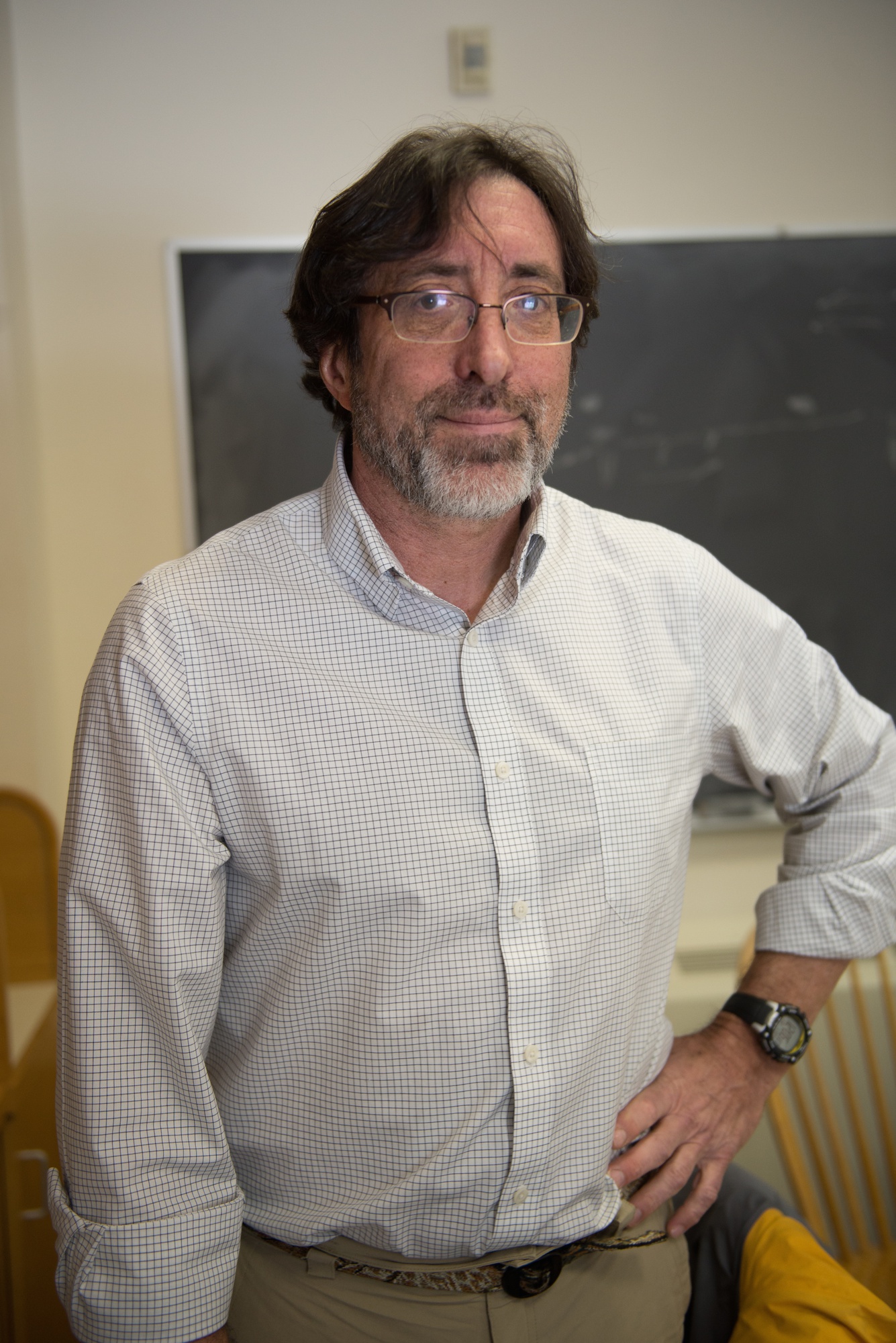 John Huth, esteemed experimental particle physicist, member of the ATLAS Collaboration at the European Center for Nuclear Physics, and professor of Science of the Physical Universe 26: “Primitive Navigation,” has an office that’s really hard to find.
By Miranda L Ryshawy

John Huth, esteemed experimental particle physicist, member of the ATLAS Collaboration at the European Center for Nuclear Physics, and professor of Science of the Physical Universe 26: “Primitive Navigation,” has an office that’s really hard to find. After climbing three flights of stairs, walking down several long corridors, and making three rights and then a couple of lefts, I arrive at Huth’s office considerably winded. The noonday light streaming from his window casts a long shadow on the sun compass arranged at his desk. He stands and gives me a cheery handshake. “I got pretty lost on the way here,” I admit. “Maybe I should be taking your class.” He responds, laughing, that I probably should. 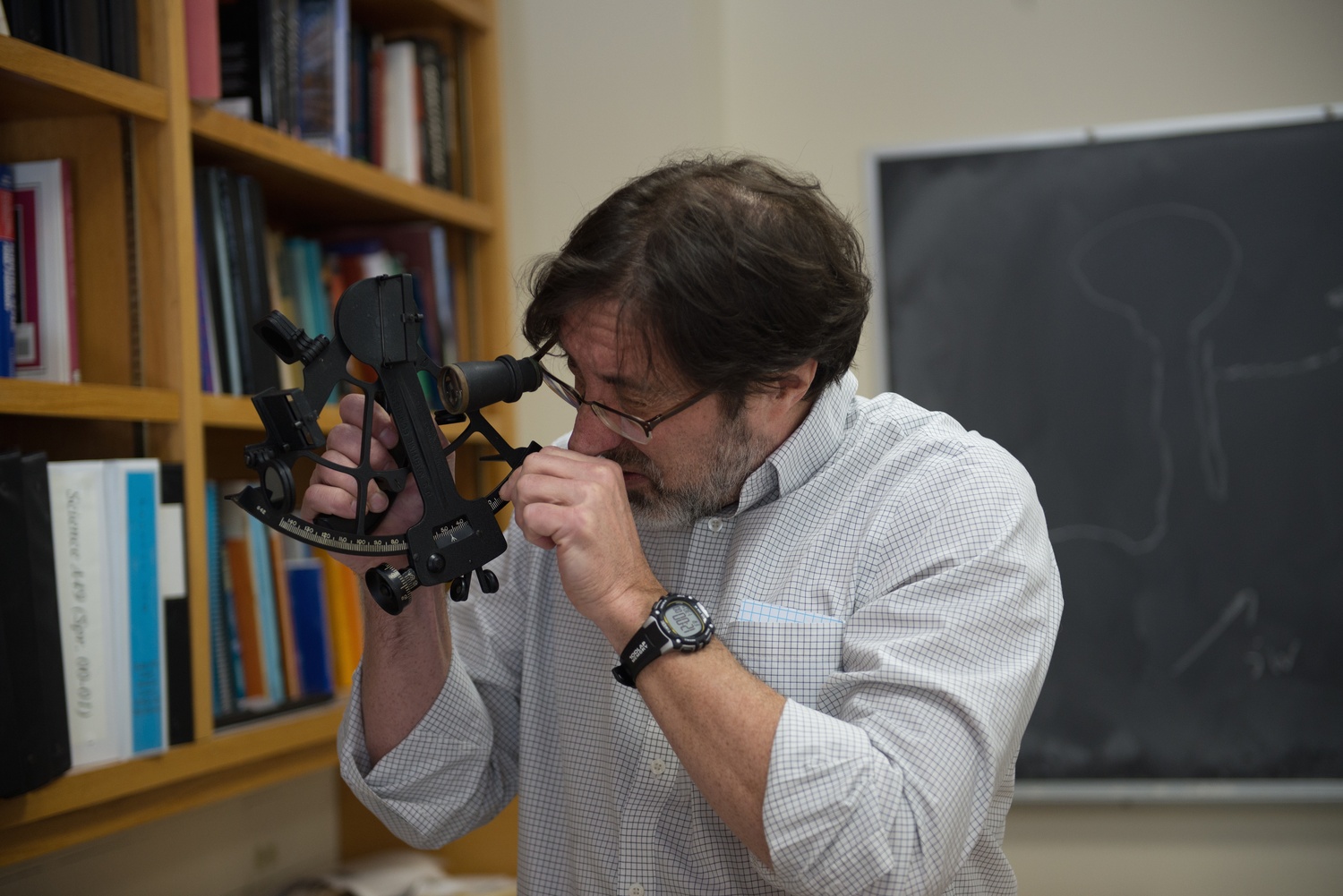 John Huth Demonsrates how to use a sextant. By Alana M Steinberg

Fifteen Minutes: So, how did a dedicated particle physicist like you get mixed up in primitive navigation?

John Huth: Well, it was an accident. In 2003, I went kayaking off the beach by my house in Cape Cod. I didn’t have a map or compass, but I paid attention to the wind direction going out. It was a sunny day, but 30 minutes into the paddle, fog closed in. Somehow, I had the presence of mind to use the wind as a way of orienting myself and navigating back to the beach. The next day I was stopped by the harbor master, who asked me about two young women who had gone kayaking the day before recreationally, about a half a mile from my house. They had been out around the same time as me. They told their boyfriends they would be back in 10 minutes, but when 45 minutes passed a search party was sent out. A day later, they found the body of one woman, but not the other, who was presumed dead. They had gotten lost in the fog.

FM: That experience must have rattled you.

JH: It’s hard to describe survivor’s guilt. You ask, “Why me? Why did I survive and these women didn’t?” I got a little bit obsessed at that point with natural ways of finding my position. Eventually I found that I was doing something very similar to what other cultures had done, like the Polynesians and the Norse, memorizing star positions and using the wind as a natural compass. I built up a stockpile of tricks.

FM: Did you develop those tricks yourself or did you go back to history?

JH: Both. I would try things that I read the Polynesians did. Here’s a perfect example. [He points at the sun compass.] There’s a stick called a noman in the middle that casts a shadow, and the path of the shadow can help you orient yourself out at sea. So I have done orienteering races with a homemade sun compass, and it turns out I did pretty well. 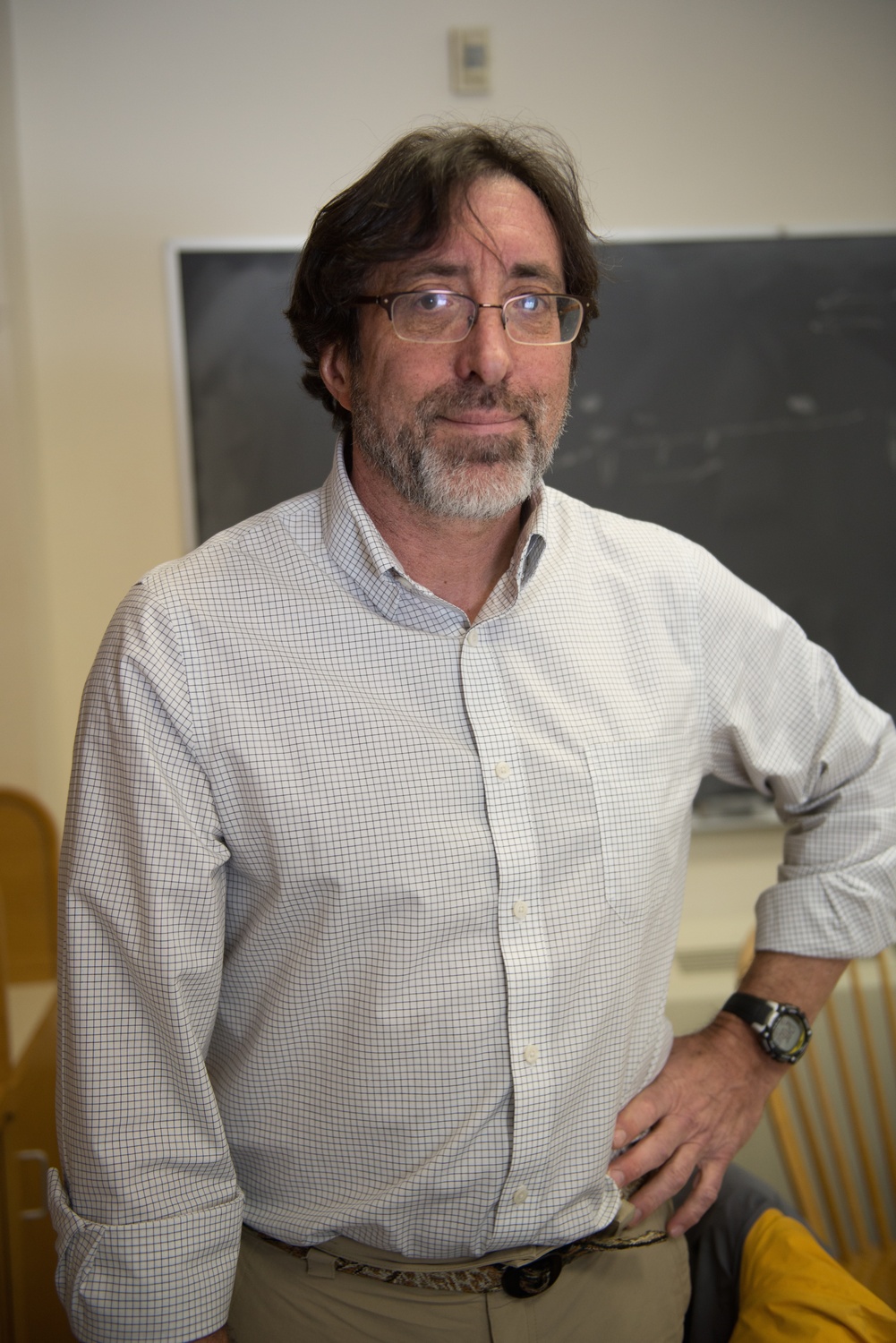 John Huth poses for a portrait in his office. By Alana M Steinberg

FM: Have you ever had a bad experience with any of these ancient navigation tricks?

JH: They’re more reliable than a compass! They’re more intuitive. But one time I got a little turned around. I was on the Charles River and I thought I could navigate by the sun, but it was too high in the sky and I didn’t recognize where I was or which way the water was flowing. So I panicked, but then I looked at the reeds through the water, saw which way they were bending, and figured out which way the water was flowing. It’s like a puzzle. Every so often something is going to throw you, and then the game is to try and correct yourself.

FM: Today there are a plethora of apps, from Waze to Google Maps, to help people who are lost. What’s your pitch for primitive navigation?

JH: People who use nature to find their way are actually much more attuned to what’s going on around them. That’s what happened to me: All of a sudden, I began to notice the sun in the sky, the clouds to the west, and Venus setting, and it’s very enriching. It forces you to think in a different way; people tend to be more analytic as a result. Too often we are presented with information in a predigested format. The question becomes: Can you figure it out for yourself? And after a few experiences getting lost and then getting un-lost, you start to develop a certain mentality. Certain research shows that parts of the brain involved in navigation are also involved in imagining scenarios. This is just speculation on my part, but I believe navigating can help us plan for the future.

FM: But you’ll still deign to use a map now and then?

JH: Oh, yeah, but sometimes the map is wrong! And then where will you be?

FM: Have you had any students take “Primitive Navigation” and then go on to have adventures?

JH: Of course! I just heard from one student who got lost in St. Louis, saw the moon rising, and realized that he was facing East. My wife and kids even do it now. 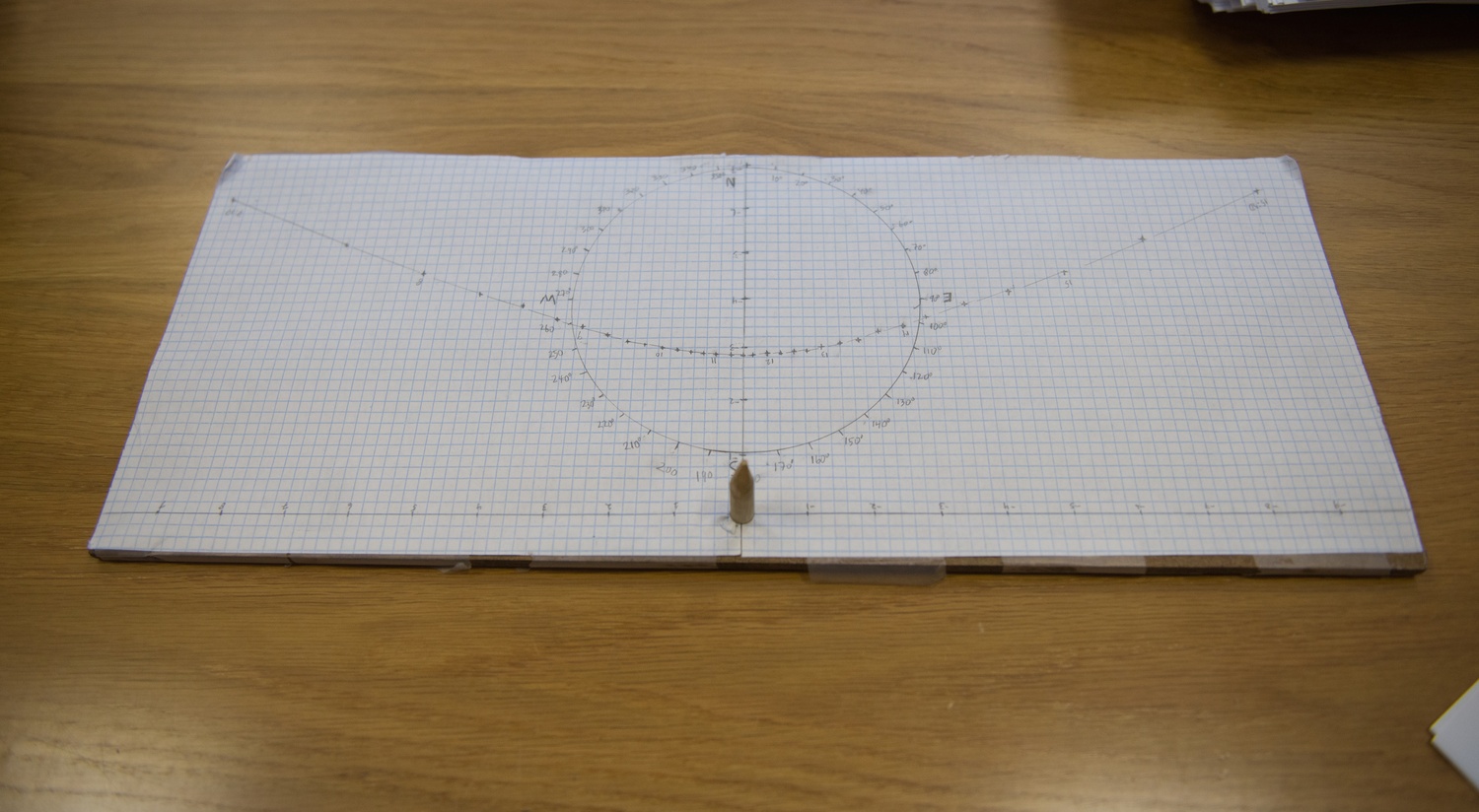 A sun compass, one of many tools used in Primitive Navigation, sits on a desk in John Huth's office. By Alana M Steinberg

JH: Well, pretty much [laughing]. Live with someone like me long enough, and pretty soon you catch on.

FM: Are there any other aspects of your life that are

JH: Well, I do a lot of stuff out in the woods. I’ve made a cloud chamber in my basement. I cook in the woods and can actually identify many types of edible mushrooms. I like to say that the apocalypse is my hobby.

FM: But you still take showers?

JH: [Laughing] Yes, I still take showers and buy my food at the grocery store. Mostly.