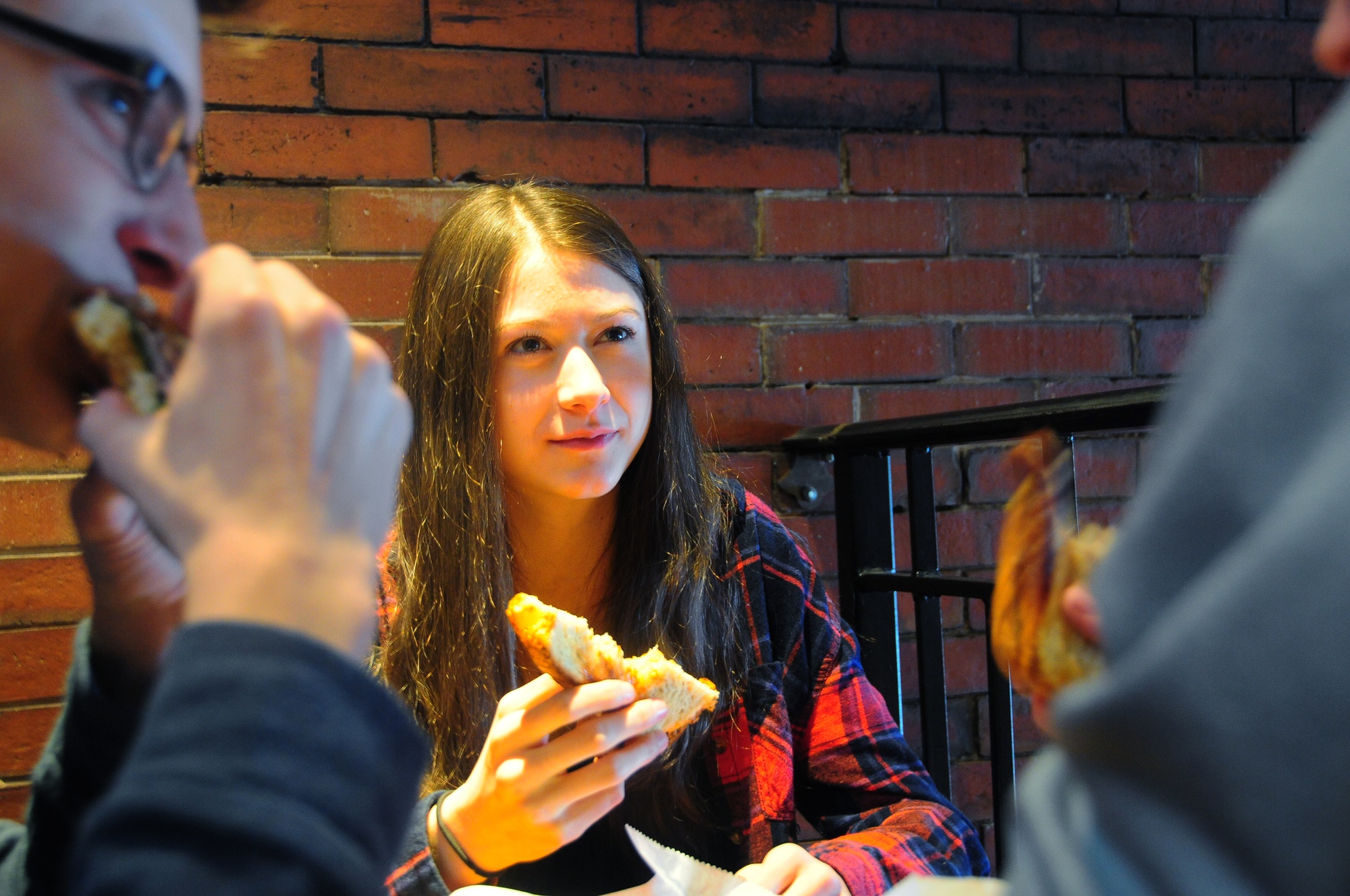 Elana P. Simon '18 grabs a bite to eat with Crimson staff writers C. Ramsey Fahs '18 and Ben G. Cort '18 to share her incredible story about her unique battle with cancer. Simon was diagnosed with a form of rare liver cancer several years ago and has developed methods that are leading to faster treatment.
Advertisement
Advertisement

Out to Lunch: Elana Simon

Few ordinary students have appreciated the spongy qualities of a healthy liver on Dr. Oz’s TV show, but Elana P. Simon ’18 is anything but ordinary. Diagnosed at age 12 with fibrolamel- lar hepatocellular carcinoma, a rare form of cancer, she has since gone on to beat the disease and, later, conduct research pinpointing the genetic mutation responsible for the affliction.
By Ben G. Cort and C. Ramsey Fahs 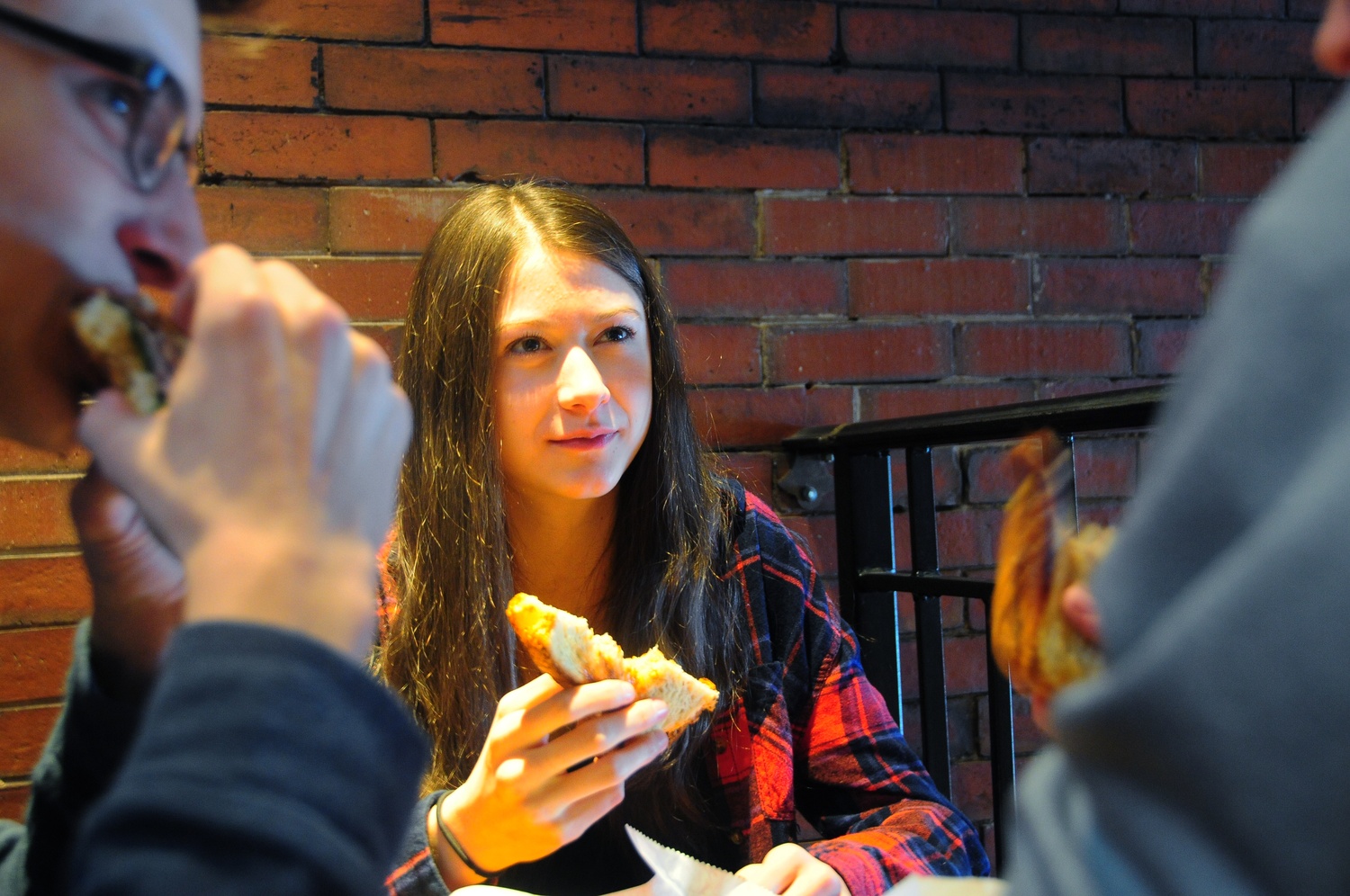 Elana P. Simon '18 grabs a bite to eat with Crimson staff writers C. Ramsey Fahs '18 and Ben G. Cort '18 to share her incredible story about her unique battle with cancer. Simon was diagnosed with a form of rare liver cancer several years ago and has developed methods that are leading to faster treatment. By Daniela A Veloza

“I want you to feel this liver.”

Few ordinary students have appreciated the spongy qualities of a healthy liver on Dr. Oz’s TV show, but Elana P. Simon ’18 is anything but ordinary. Diagnosed at age 12 with fibrolamellar hepatocellular carcinoma, a rare form of cancer, she has since gone on to beat the disease and, later, conduct research pinpointing the genetic mutation responsible for the affliction. While Simon has been the subject of multiple media frenzies, she describes her time on Dr. Oz’s show as “the most absurd experience I’ve had because of this whole thing.”

Slight of frame, with shoulder-length brown hair falling onto her flannel shirt, Simon provides a polished and well-rehearsed summary of her experience as cancer survivor, research pioneer, and community leader. Though she says her title of “the teenage girl who cured her own cancer” is “a bit generous,” the real story is just as incredible.

Simon’s own cancer was caught in its early stages, and was removed before it could metastasize. Years later, in high school, after soliciting sample donations over YouTube, Simon worked with her surgeon’s team in her father’s lab to determine the genetic abnormality—dubbed a “chimera gene”—responsible for her cancer. The team published its findings in Science Magazine; Simon is listed as the first co-editor.

This paper instigated the first media frenzy in Simon’s life. She was the subject of articles in The Wall Street Journal and The New Yorker, and the guest on several TV talk shows. She was even asked for her autograph (but only once, she promises). More importantly, she learned that hospitals around the world were checking their own findings against the paper and confirming the presence of the chimera gene in their patients as well.

Simon remains humble about her fame. “I feel like I don’t take it all that seriously. It comes, it goes. It’s fun...I feel like it actually doesn’t amount to that much,” she says. In Simon’s mind, the most valuable part of the exposure was the ability to connect with incredible scientists from around the globe and to use the publicity to further research towards a cure.

Also, selfies with Bill Nye. “He was all about the selfies. He was going up to all the kids like: ‘Shall we take a selfie?’” Simon says.

If media attention is a series of peaks and troughs, it’s hard to deny that, at least at Harvard, Simon has reached a new peak. On Feb. 1, Simon introduced President Barack Obama at the launch of his Precision Medicine Initiative. Two days before the event, she received a call from her mother relaying a vague invitation to fly out to the White House. Amused by her celebrity status, Simon’s roommates filled their Snapchat stories with pictures of Simon protesting: “Mom, I can’t to go to the White House on Friday. I have class!”

Nonetheless, on Thursday, en route to a CS51 lecture, Simon’s phone rang with a call from the White House, requesting that she write a speech to introduce Obama. When Simon explained that she had class and then tickets to Hasty Pudding Theatrical’s Woman of the Year roast, the aide begged: “Can’t you just write it during lecture?” Brashly ignoring the oratory stylings of Professor Greg Morrisett, Simon did just that.

The next day, after chatting with the president, whom she had previously met at the White House Sci- ence Fair, Simon introduced him at the event and even received a Presidential hug (“He’s a pretty good hugger,” she says).

Simon managed to jet back to Cambridge just in time for dinner at Annenberg. Still outfitted in a dress and heels, she told curious friends that she had been “at a business attire event.”

The ruse didn’t last long. “My roommates had found all the pictures online and proceeded to make a lot of fun of me,” says Simon. Any hope of keeping a low profile was forever ruined when the White House took snippets from her previous speeches and penned an email in her name, sending it to all who had opted in to receive such missives from the Capitol. Even her ex-boyfriend received the email and texted her in confusion.

Although press coverage can make it sound as if cancer research is Simon’s entire life, she also harbors a longstanding love for the performing arts. Having appeared in two “really depressing German shows” last semester, she is performing in Öğk, an experimental production, this spring. She is also a member of the Harvard Radcliffe Modern Dance Company and is proficient in circus silks and aerial acrobatics.

Before college, Simon expressed concern that her work in cancer would force her into the field for life, and brand her as “Cancer Research Girl.” At Harvard, however, she primarily studies computer science, and has yet to decide if she wants to add working in a lab to her busy schedule.

Despite her exploration this year, Simon remains a public figure for the disease.

When she first Googled fibrola- mellar after diagnosis, she was met with sparse information, mostly emphasizing the low survival rate. Simon’s research and her family’s advocacy efforts (“Fibrolamellar has become sort of a pet project for my family,” she says) now offer more optimistic prospects for patients.

“A lot of people will reach out to me when they get diagnosed,” said Simon. “Cancer is something that’s just part of my life... so there’s a very good chance that I’ll spend my life trying to research it.”