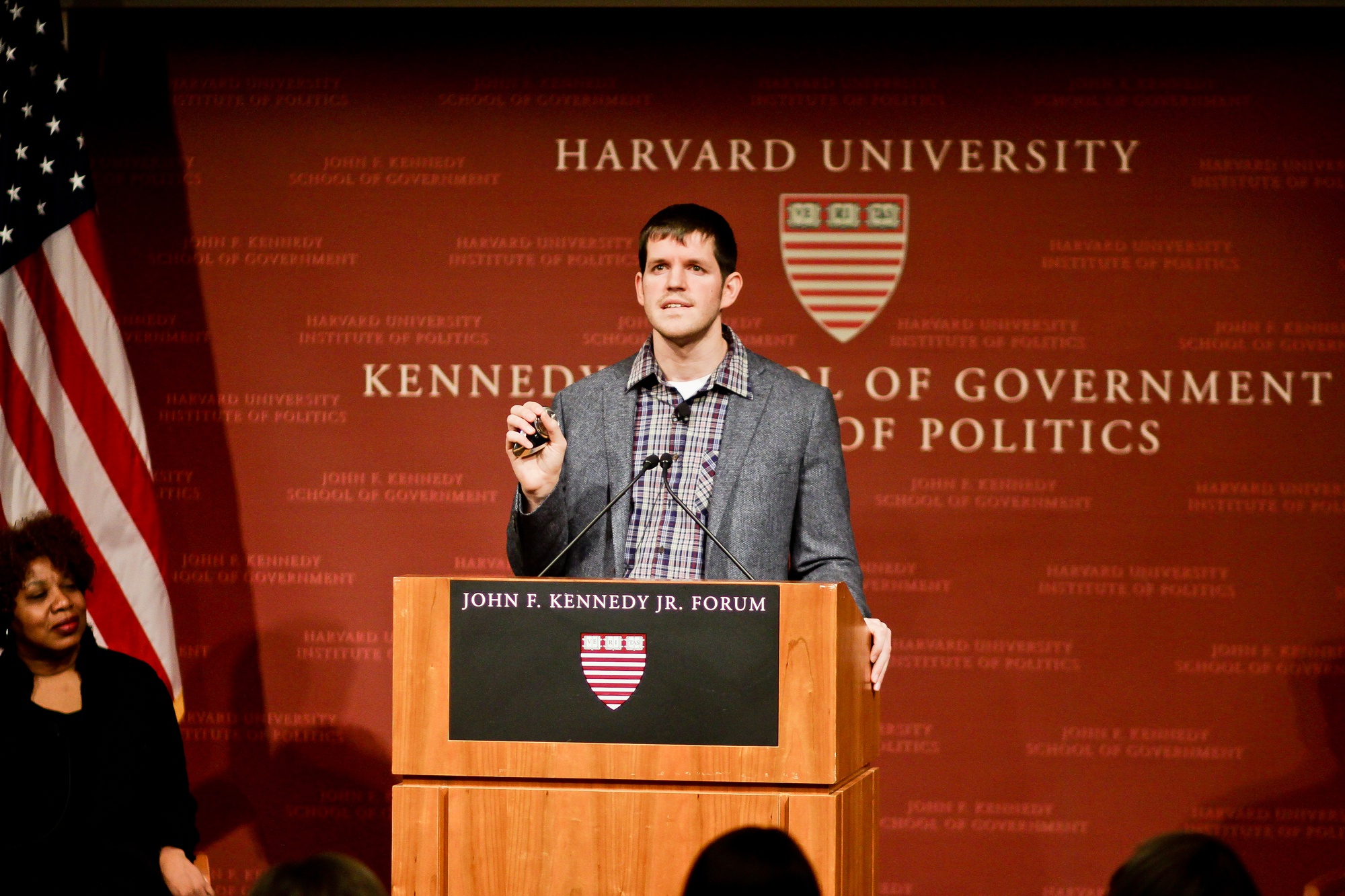 Brandon Stanton, the photographer behind the blog Humans of New York, which boasts a Facebook following of over 12 million fans, speaks at the JFK Jr. Forum on the blog's origins, growth, and future on Wednesday evening.
Advertisement
Advertisement

When the John F. Kennedy Jr. Forum announced Brandon Stanton—the man with 2.5 million Instagram followers—would be visiting Harvard to speak, we scrambled to enter the lottery for the event. With the fates smiling upon us, we received confirmation emails a few days later.
By Andrew W. Badinelli and Miranda L Ryshawy

As millennials, there are a number of items on our collective to-do lists. In addition to texting and listening to music non-stop (and consistently disappointing our elders), we are honor-bound to follow the photo blog Humans of New York. And so when the John F. Kennedy Jr. Forum announced Brandon Stanton—the man with 2.5 million Instagram followers—would be visiting Harvard to speak, we scrambled to enter the lottery for the event. With the fates smiling upon us, we received confirmation emails a few days later.

Fast forward to Feb. 11—guess what? It’s a blizzard. As we walk down the narrow and slick sidewalks of Harvard Square towards the Institute of Politics, one of us (who shall remain unidentified) realizes they forgot their ticket. Panic sets in. Spinning around, they sprint back up those perilously narrow, slick sidewalks, praying and time-checking and cursing the whole way.

With the crisis averted, we arrive, running low on breath but high in spirits. From our perch on the second floor, we see it all: the audience members leafing through their programs, the third floor viewers leaning over the railing searching for that prime camera angle, that one guy updating his status about the cool event he is “just so honored to be at.” The IOP is hopping. A few minutes go by and IOP Director Maggie Williams steps out with Stanton to roaring applause. With smartphones ready and waiting to capture this very meta moment, the humans of the audience snap photos as quickly as they can. 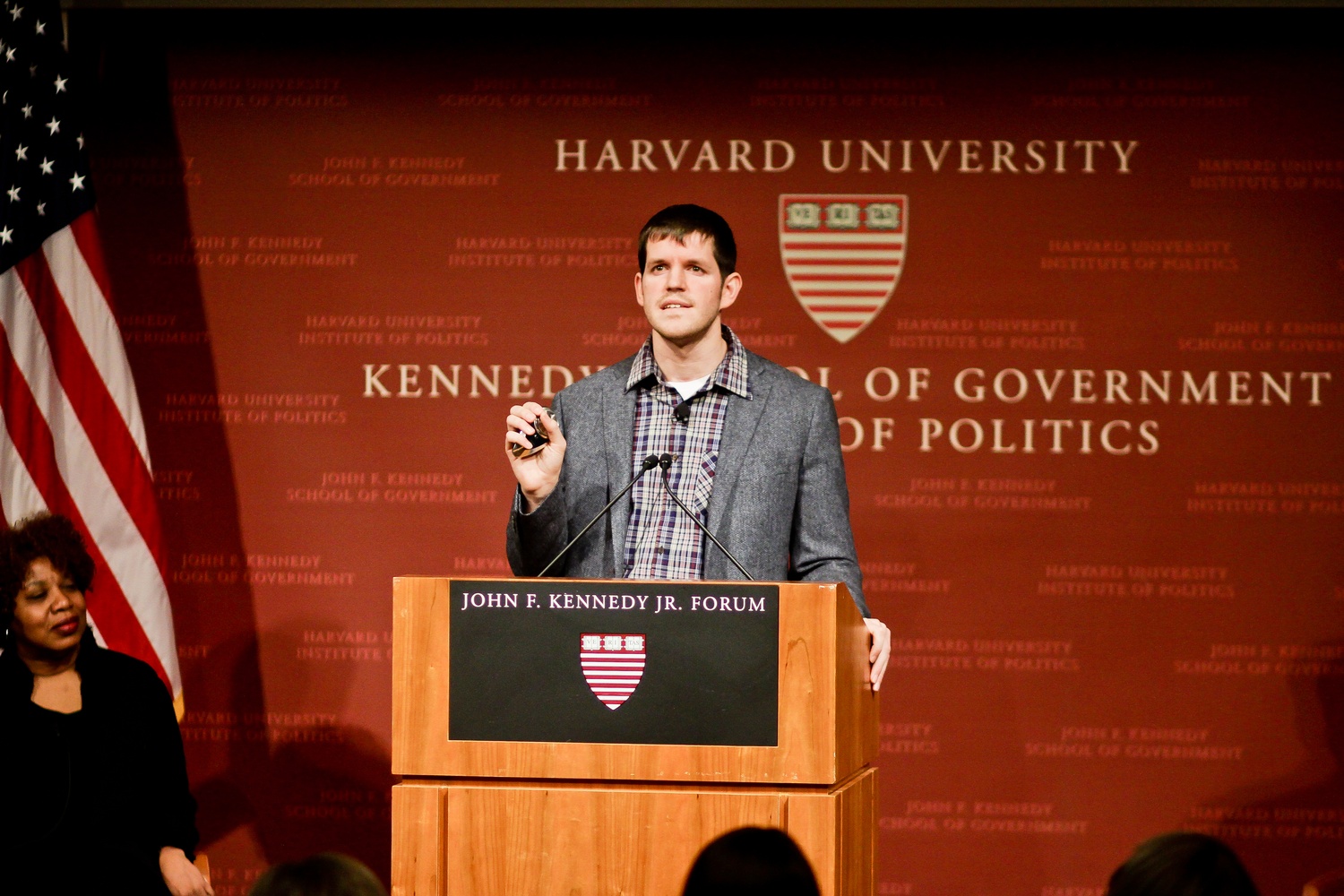 Brandon Stanton, the photographer behind the blog Humans of New York, which boasts a Facebook following of over 12 million fans, speaks at the JFK Jr. Forum on the blog's origins, growth, and future. By Shunella Grace Lumas

Stanton quickly proves himself to be just as kind, observant, and witty as we had hoped. Breaking the ice with his audience through humor, Stanton starts out with a joke about the massive amounts of snow we’ve been seeing. And although it hits a little close to home—it’s tough not seeing the sun for a week straight—Stanton manages to set a light, conversational tone which he keeps up throughout the event.

Humbly, Stanton touches on his blog’s most exciting new developments: A partnership with the UN, his recent interview with President Barack Obama in the Oval Office, and his trips to Africa. Still, Stanton’s self-deprecating charm—he repeatedly declares himself to be “a terrible photographer” and offers the disclaimer that it took him six years to graduate from the University of Georgia—keeps him grounded despite his monumental successes.

The tables turn on Stanton during a question and answer session. The man so used to being behind the camera and doing the interviews suddenly faces the very same questions he poses to the people on his blog. Asked about his biggest regrets, his biggest inspiration, and his favorite blog post, Stanton is forced to dig deep and come up with honest answers. Stanton chuckles, commenting that it’s only fair that he has to squirm a bit—he asks the same questions of people on the street day in and day out. For Stanton, his job is “not judging or analyzing, but just hearing their experiences,” which may explain why he’s been able to draw personal and meaningful stories out of everyone from gang members to drag queens, state officials to kindergarteners. Stanton truly sees this as his personal calling, his mis- sion in life. “Time,” Stanton argues, “matters so much more than money. I wanted to make enough money so that I owned my time, and could do something meaningful with it.”

Stanton touched on the inherently political nature of his blog. Even though he never intended for his project to have any political leanings, the nature of the interview process means that personal biases will inevitably come into play. For Stanton, the blog will always be, first and foremost, a sweeping portrait of the human experience, and his goal is to create solidarity even when opinions are divided. He notes that he’s very fortunate to receive a wealth of positive comments on his page.

When the lengthy Q&A draws to a close, the event really escalates. No longer bound by the behavioral expectations for a polite viewing audience, the crowd swarms towards the stage. Each crowd member has the same goal—a selfie with Stanton—and like gladiators, everyone is prepared to fight to the death for it (and by that we mean pushing, shoving, and stepping on toes). From our disadvantaged position one floor above, all we could do was put on our coats and try in vain to convince ourselves that we just don’t need a selfie with Stanton, anyway.