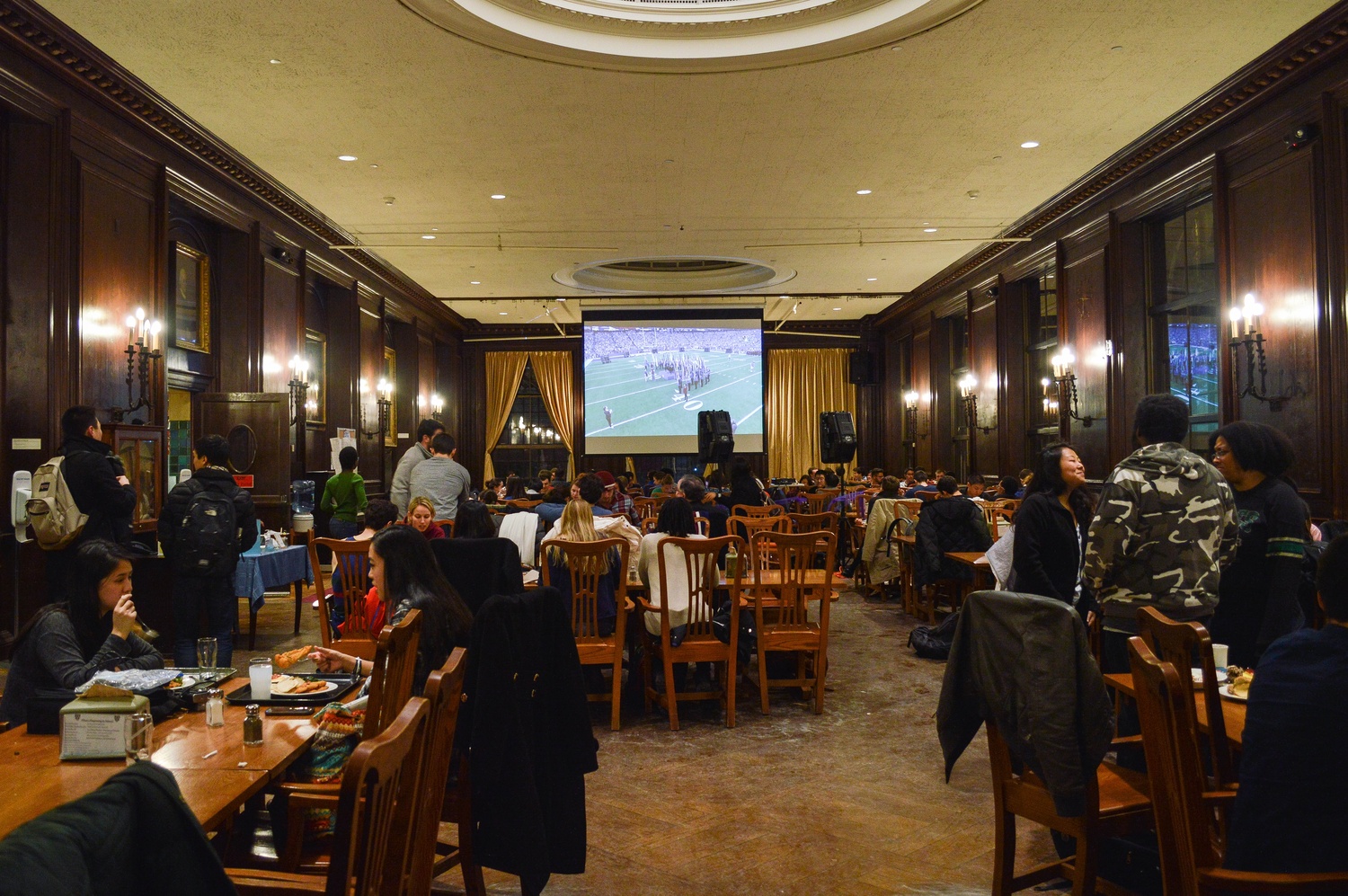 A screen in the back of the Adams House dining hall displays a live screening of the 49th Super Bowl as Adams residents settle for dinner. By Y. Kit Wu
By Quynh-Nhu Le, Crimson Staff Writer

Students huddled around TVs and projectors across campus Sunday night to snack on free wings and watch the New England Patriots beat the Seattle Seahawks 28-24 in the nail-biting Super Bowl XLIX, after enjoying a special Super Bowl-themed dinner menu in the dining halls.

Many House Committees threw viewing parties for students in their respective dining halls and common rooms, complete with food, kegs for those over 21, and festive decorations.

In the Winthrop House Junior Common Room, HoCo members had spread tablecloths and released balloons—in both Patriots’ blue and Seahawks’ lime-green. Around 30 students came to watch the game.

According to Matthew T. Disorbo ’17, Winthrop HoCo social chair, HoCo had consciously made an effort not to support a team, even ordering a “team-neutral cake.” Disorbo said the cake was accidentally made with “Go Pats” written on it, and HoCo had to fix it by icing it out.

In addition to the House parties, several other organizations on campus hosted their own viewing parties. The Freshman Dean’s Office and the Undergraduate Council again partnered to host a viewing party at the Queen’s Head Pub for freshmen.

The Humanist Hub at Harvard hosted a dual Super Bowl and anti-Super Bowl party open to students and Cambridge residents.

According to Vanessa M. Zoltan, assistant humanist chaplain at Harvard and a proctor in Thayer Hall, the party came about because of disagreement about the value of football among the members of the Hub.

“We wanted to throw a party where the dialogue and debate about whether football is a good thing was at the center,” Zoltan said. At one point in the party, one TV at the Hub showed the Super Bowl while another showed “Puppy Bowl,” a show on Animal Planet.

Even Harvard University Dining Services got into the celebratory spirit of the game, preparing popular finger and pub foods like potato skins and buffalo wings. According to HUDS worker Betty Johnson, the dining halls have had a special Super Bowl Sunday dinner menu for all of the 13 years she has worked at HUDS.

On Sunday, students and Harvard staff could be seen donning the jerseys of their favored teams.

Disorbo said he thought viewing parties were overall a great opportunity to get to know other students.

“It’s really cool,” said Disorbo, himself wearing a Patriots jersey. “People come out of the woodwork that you didn’t know are fans. It’s kind of a cool way to bond over something that you normally wouldn’t get to.”