For the second time this season, the Saints beat the Crimson, 5-1 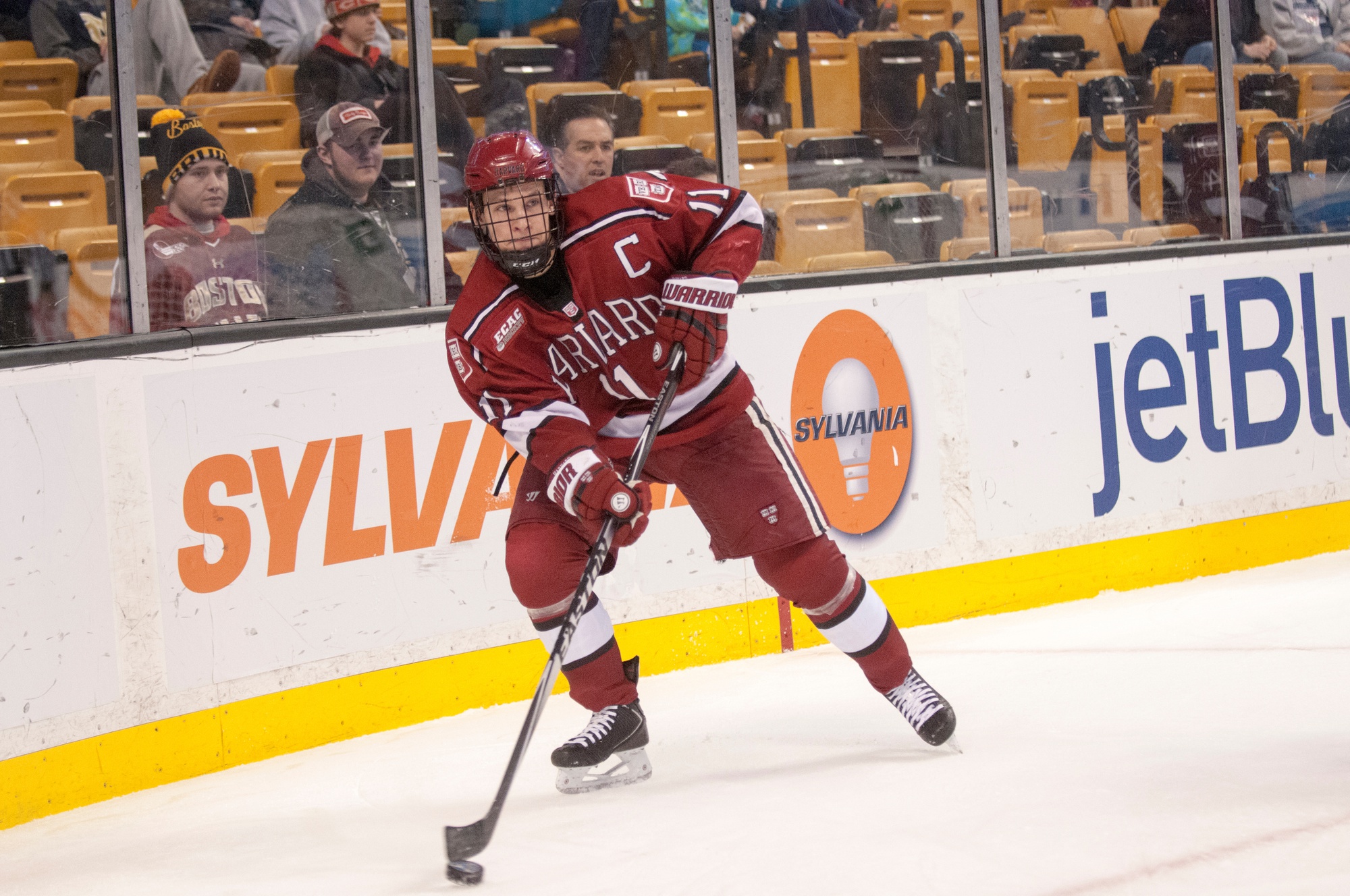 Junior co-captain Kyle Criscuolo had the lone goal of the night for the Crimson in its 5-1 loss to St. Lawrence on Friday.
By Michael D. Ledecky, Crimson Staff Writer

His father, George Hughes ’79, knew a thing or two about scoring with Harvard sweaters on the ice, leading the Crimson in points in all four of his seasons as a star center under the tutelage of Bill Cleary ’56.

On Friday night, Gunnar carried on the family tradition, albeit in reverse. The senior netted two goals and added an assist as the No. 20/- Saints cruised to beat No. 14/13 Harvard, 5-1, at Appleton Arena.

“It’s always been fun to play against [Harvard],” said Hughes, who grew up in Boston going to Harvard hockey games. “I always get a little extra kick when I play against them. I love playing against that team.”

Harvard entered the weekend wary of a slow start. Just five weeks ago, Hughes jumpstarted a first period onslaught in a 5-1 win St. Lawrence at the Bright-Landry Hockey Center off a feed from junior linemate Tommy Thompson.

Yet on Friday, the Hughes and Thompson caught Harvard with a sense of déjà vu that ultimately reflected itself in the final score. After junior Crimson goaltender Steve Michalek (22 saves) scrambled to stop a flurry of Saints opportunities, Thompson connected with Hughes across the slot to beat Michalek blocker-side at 9:06 in the first for the game’s first goal.

Junior co-captain Kyle Criscuolo salvaged Harvard’s weak opening frame on a power play by batting a blast from the point by sophomore Tyler Moy out of the air and into the net with 14 seconds left in the period, yet the game's final two-thirds rewarded the Saints for their persistence.

Hughes scored his second of the game at 10:14 in the middle frame with a shot through traffic that deflected off the knee of a Harvard defender. Three minutes later, Hughes caught Harvard on a line change to create a rush with Thompson, who put back his own rebound for the insurance marker.

Marnell’s strike prompted Harvard coach Ted Donato ’91 to pull Michalek, who was one of the few bright spots for Harvard with a handful of acrobatic saves in the first half of the game. Junior goaltender Peter Traber (four saves) came in on relief for his first ice time this season.

“Steve battled hard and made some big saves,” Donato said. “[Pulling him] was more about trying to keep him fresh.”

For St. Lawrence, star freshman goaltender Kyle Hayton (25 saves) was good but did not have to be great. Aside from a sprawling pad save by Hayton on a breakaway from sophomore center Alex Kerfoot, it was the Saints’ suffocating forecheck that carried the day, creating turnovers and limiting the visitors’ ability to generate opportunities off the rush.

“If you give [Harvard] time and space, they’ll make you pay,” St. Lawrence coach Greg Carvel said. “I thought there were times we allowed that tonight…. But there wasn’t a lot of space for them tonight.”

With three games left in the regular season, the Saints sit second in the ECAC Hockey standings. Harvard is now fifth, one spot out of the place sufficient to clinch a first round bye in the conference tournament.

An earlier version of this article misstated the final score of the Harvard-St. Lawrence men's hockey game. The Saints defeated Harvard 5-1.