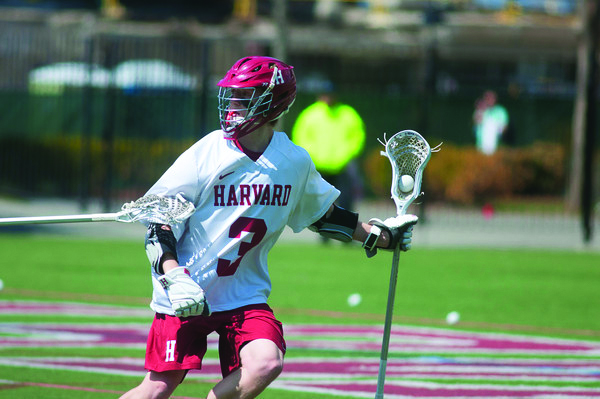 With snow piled high on the winter streets of Cambridge, the No. 10/13 Harvard men’s lacrosse team traveled south to Durham, N.C., but did not find a warm reception waiting for them from No. 6/6 Duke. Strong shooting helped the defending national champions stretch a two-goal halftime lead into a seven-goal margin of victory, 21-14.

Three goals late in the second quarter cut the Crimson’s halftime deficit to two goals allowed Harvard to stick around in the game. But Duke put a stop to the Crimson’s hopes, winning the third quarter, 4-2, and then dominating the fourth quarter by a 7-4 margin.

“They’re always a tough team,” co-captain Jake Gambitsky said. “Coming off a national championship, we knew we were going to get a really good team this year. They lost some good guys from last year, some All-Americans…but they’ve reloaded.”

The Blue Devils dominated play on the ground. Duke was able to out-groundball Harvard 55-29, gaining far more scoring opportunities and possessions on the way to its victory. This included dominating at the faceoff, where the Blue Devils managed to take 27 of the 39 possessions following restarts.

“They were better than us on ground balls,” said Harvard coach Chris Wojcik ’96. “When you tilt the balance of possession and time of possession in a team like that’s favor, you’re just not going to win the game.”

At the start of the game, the two teams went back and forth, neither able to take an early definitive lead. The Blue Devils opened the scoring less than a minute into the game, but the Crimson bounced back, as junior attackman Devin Dwyer and senior midfielder Philip Wagley notched back-to-back scores.

That was the last time that Harvard would lead in the game.

“We made a number of mental mistakes,” Wojcik said. “And whenever you do that, Duke capitalizes.”

The Blue Devils rallied back to take control, scoring three unanswered goals, and then one more after junior attackman Will Walker scored for the Crimson.

Duke then started the second quarter off strong, going on a 5-2 run to take a commanding five-goal lead with only four minutes left in the half.

But Harvard bounced back again, as junior midfielder Keegan Michel and junior attackmen Ian Ardrey and Deke Burns all scored within the last two minutes to bring the lead back to within two going into halftime.

Duke scored right at the outset of the third quarter, but then were held scoreless by the Crimson for nearly nine minutes, its longest dry-spell of the game, before matching a goal from Harvard’s freshman midfielder Joe Lang and another from Walker with three of their own.

Burns brought it back within three for the Crimson at the start of the fourth quarter, but after that it was all Blue Devils, as the defending national champions went on a 7-3 run to end the game. Sophomore midfielder Matt Ryan, freshman attackman Tim Edmonds, and Dwyer each scored for Harvard, but their efforts were too little, too late.

During the fourth quarter, Duke won 17 ground balls to the Crimson’s seven, and took 18 shots to Harvard’s six as a result en route to a 21-14 finish.

“We had opportunities to compete,” Gambitsky said. “But we just didn’t execute as well as we wanted to and they went on a run at the end. We’re looking forward though. This was a tough game against one of the top teams in the country, and we’re confident we can continue to get better and learn. We’re looking confident we can rebound against Quinnipiac on Tuesday.”