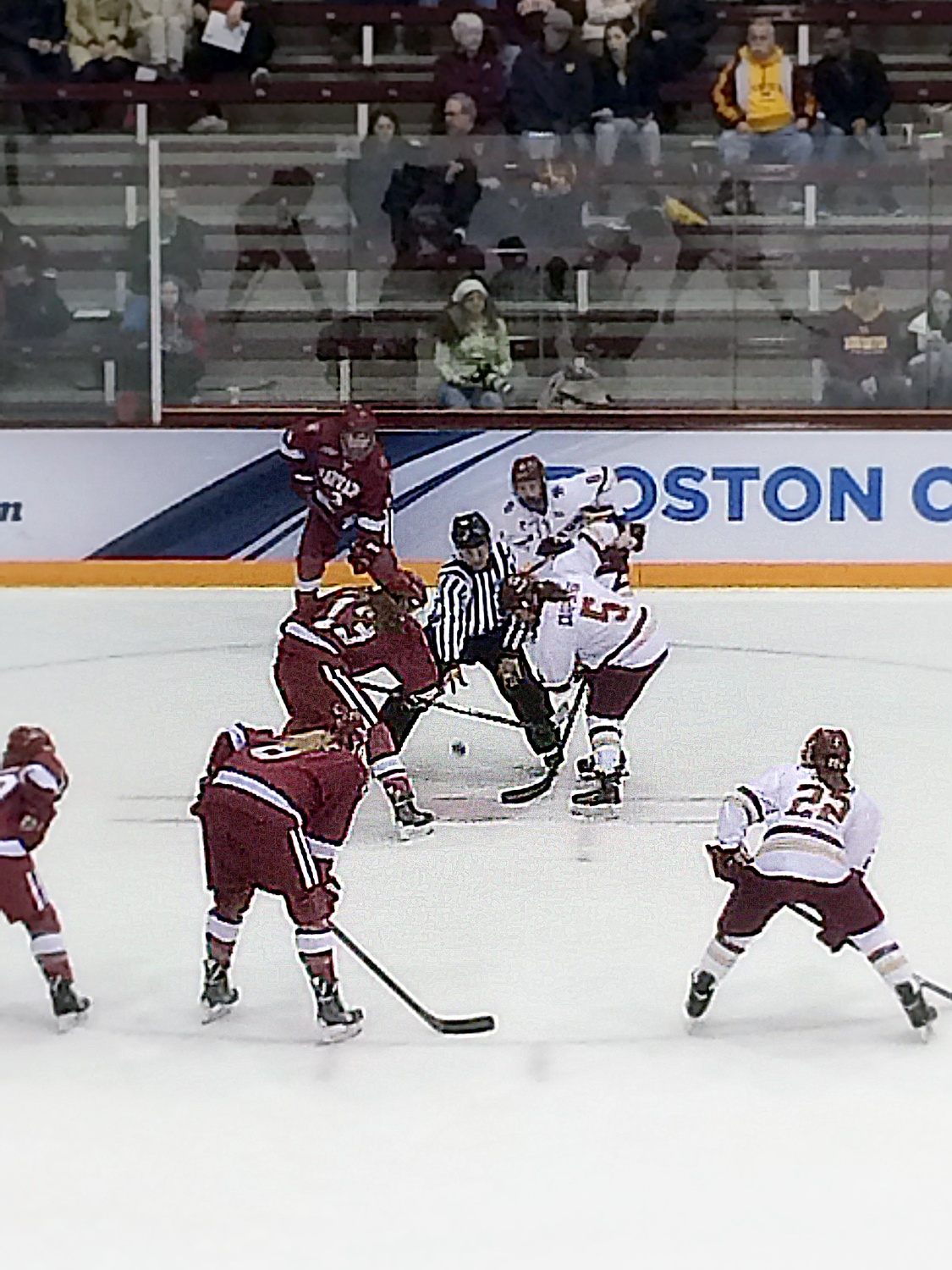 After scoring a combined 17 goals in their first two meetings, Harvard and Boston College went scoreless in the first two periods of play at the Ridder Arena in Minneapolis. By Sam Danello
By Caleb Lee, Crimson Staff Writer

Forget the 17 goals that Harvard and Boston College had scored in their first two meetings this season—it had been over a month since the two squads last faced off, and a lot of hockey happened in that time. These were two different teams that showed up at Ridder Arena in Minneapolis on Friday night, and defense ruled the day in a bruiser that saw the Crimson rack up four penalties—including an ejection of Harvard junior forward Miye D’Oench just 15 minutes into the contest for a five-minute major and a game misconduct.

Both teams—especially the Eagles—got their fair share of scoring looks and open lanes. But in a game that saw two of the top-three point leaders in all of Division I women’s hockey—Boston College junior forwards Alex Carpenter (81) and Haley Skarupa (71)—it was the gloves, the pads, the stick, and the body of Harvard junior goalie Emerance Maschmeyer that stole the show in the Crimson’s thrilling 2-1 triumph.

Only a little more than a period and a half into the Nov. 28 game against Boston College, Harvard junior goalie Emerance Maschmeyer found herself skating towards the Crimson bench and off the ice. It wasn’t the end of a period or the result of an injury—Harvard coach Katey Stone thought it was time for a change.

After a goal by the Skarupa midway through the second frame, the Boston College lead had swelled to 5-2, and Stone motioned for the next Crimson goalie on the bench, sophomore Brianna Laing, to relieve Maschmeyer.

The Bruderheim, Alberta, native could only watch as the Eagles continued to find hole after hole in the Harvard defense. By the 8:23 mark of the final period, the score was now a 10-2 disaster. Having seen enough, Stone put Maschmeyer back into the game for the last 11-plus minutes of the contest.

The game might have been far out of reach, but something clicked. Maschmeyer saved the seven shots that came her direction in her third-frame return—not a triumphant one to say the least, but certainly something to work with.

“That 10-2 loss was not a great feeling, so of course there [was] a lot of extra motivation on that end,” Maschmeyer said after the NCAA semifinal game.

Flash forward to Feb. 10, when the Crimson and Boston College faced off for a second time in the Beanpot final. In what proved to be her 10th win of the year, Maschmeyer stopped 30 of the 32 shots that came her way, weathering seven Eagles power plays to ensure that the skaters from Harvard would be the ice hockey queens of Boston, at least for the year.

“It doesn’t matter who I’m going up against,” said Maschmeyer after the win, which clinched the Crimson’s first Beanpot title since 2010. “For me, I look across the ice and say I’m going to win this battle, and I just have to outplay the other goalie to win.”

And in the third matchup between Maschmeyer and Boston College freshman goalie Katie Burt on college hockey’s biggest stage, outplay the other goalie she did. Harvard’s net-minder was everywhere on Friday night, sprawling this way and that, doing everything in her power to keep the puck out of the net.

Even after the Eagles broke through the brick wall with a top-shelf shot off a rebound off the boards with 4:23 to go in the game, Maschmeyer didn’t let Boston College cash in on its newfound offensive momentum.

As the Crimson netminder cradled the puck for her 43rd and final save, a half-dozen red and white-jerseyed bodies crashed to the ground around her, some trying to wrench the puck from her gloved hand, others trying to prevent that from happening.

The whistle blew loud and clear, and as the officiating crew pulled apart bodies from the pileup, at least one thing was certain.

Maschmeyer still had that puck.

Though Harvard had proved itself capable of the big win when it took down Boston College in the Beanpot final, which handed the Eagles their first loss of the season, it would seem that the hockey gods wanted to see a rubber match between the two programs.

“Just another great battle with a crosstown rival, but this time in Minnesota,” Stone said.

The game started with defense, with neither team scoring in the first two periods of play. Then the Crimson finally found a breakthrough, as senior Kalley Armstrong scored through the five-hole of Burt on a shot that Armstrong herself dubbed “some junk on the net.” Six minutes later, Harvard junior forward Mary Parker followed it up with a shorthanded goal as Burt fell over backwards, putting the Crimson up two.

The Eagles’ lone goal came off a perfect bounce off the boards behind the net that fell at the feet of senior Emily Field, who one-timed a shot top-shelf to cut the lead to one.

But the Harvard defense, which Maschmeyer willed on until the final whistle, held firm to seal the deal.

When asked if she could see her team making the NCAA championship game after the 10-2 loss to Boston College in November, Stone revealed she was almost glad that the Eagles gave her team such a thorough beatdown.

“[T]hose things happen, and sometimes they’re the best things that could happen to a hockey team,” Stone said. “We really had to take stock after that…. That weekend was a huge turning point for us.”

Bit by bit, piece by piece, the Harvard team that skated onto center ice on Friday night came together after an 0-2-2 stretch in November that culminated in the Boston College loss. There was the three-pronged attack of forwards Parker, D’Oench, and Samantha Reber, who each scored at least 17 goals. Then there was the stifling defense of junior Michelle Picard and senior Marissa Gedman, the two defenders that recorded plus-minus ratings of plus-21 and plus-25, respectively. And Maschmeyer, who has allowed just six goals in the past six games, held her ground in the crease.

Harvard and Minnesota may have a Sunday date for an NCAA championship, but the Crimson proved that the local crown belongs in Cambridge as a result of the instant classic that went down late Friday night.