Tyler Moy: An Artist on the Ice 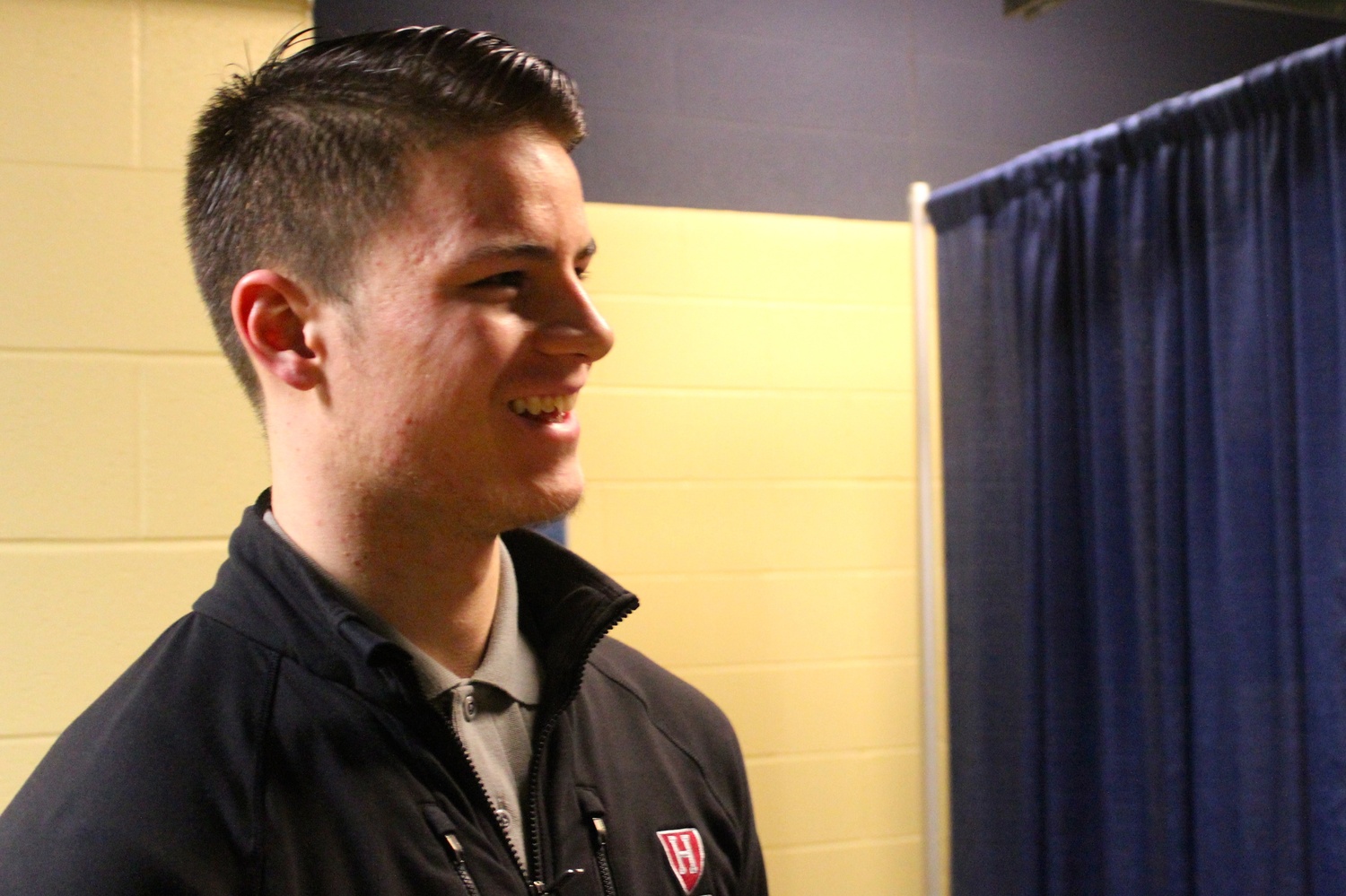 SOUTH BEND, Ind.—There are plenty of reasons to fear the Harvard men’s ice hockey team if you’re another squad in the NCAA tournament’s Midwest regional this weekend.

In an interview before last weekend’s ECAC semifinals, however, the first Crimson player mentioned by Quinnipiac coach Rand Pecknold was not among these usual suspects. What’s one of the scariest things about Harvard, according to Pecknold?

“Tyler Moy is on their third line.”

When it comes to the Crimson’s scoring depth, the conversation has to start with Moy.

“I definitely think that my confidence has been growing all year [after] coming to the realization that I can play with top players, against top players,” Moy said on Wednesday. “I think [my time on the first line] really helped me grow as a player and grow as a person as well. I really embraced that, I think, and it made me realize that I was able to produce up there.” 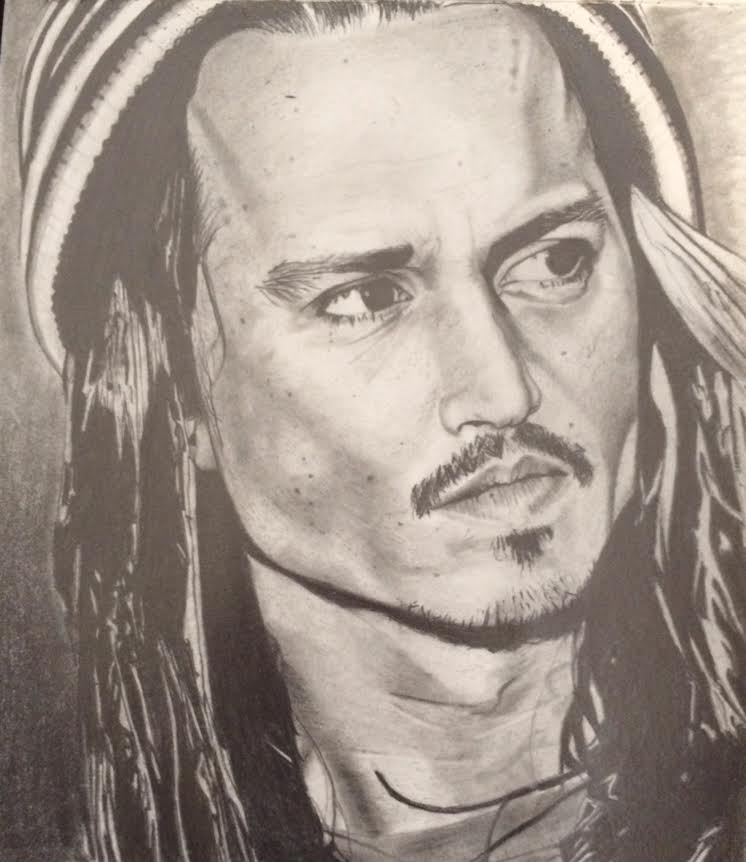 Portrait of Johnny Depp by Tyler Moy. By Courtesy of Tyler Moy .
Advertisement

There’s little conventional about Moy. His distinctiveness comes across in his interviews, which are unusually eloquent and reflective. After practices and games, he’s typically on one end or the other of jokes flying across the Crimson locker room.

“He’s definitely unique,” junior co-captain Kyle Criscuolo says. “He’s got some funny relationships with everybody. He likes to have some fun in the locker room, but when it comes to the rink, when he’s jumping on the ice, he’s pretty serious.”

At Harvard, Moy is his team’s only human evolutionary biology concentrator. In his spare time, he creates detailed graphite drawings, taking after his Swiss maternal grandmother—an accomplished painter.

On the ice, Moy plays with confidence—a concept that he likes to talk and think about. His Twitter bio includes a quote from New Zealand artist Peter McIntyre: “Confidence comes not from always being right, but from not fearing to be wrong.”

Moy’s father and longtime coach, Randy Moy, saw this confidence on full display last summer, when Moy returned to his San Diego home to train with the goal of developing himself into a more complete NHL prospect. 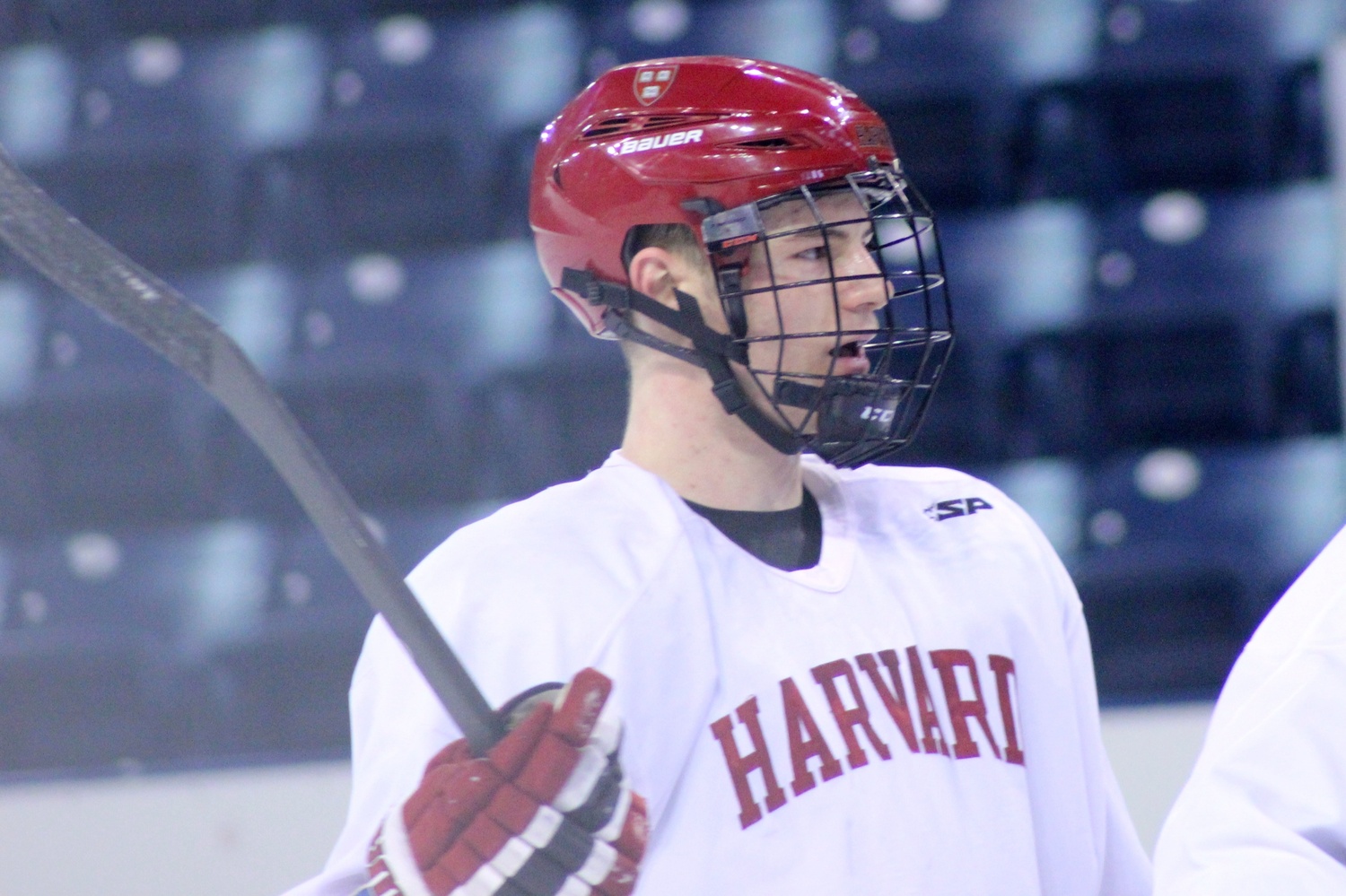 Tyler Moy skates in practice on Friday at Notre Dame's Compton Family Ice Arena a day before the start of the NCAA tournament's Midwest Regional. By Michael D. Ledecky

Moy’s journey to Harvard started at an ice rink in San Diego under the tutelage of his father, who had played college hockey for Western Michigan before relocating to California to serve as an assistant coach for the now-defunct Division I program at U.S. International University. Randy coached Moy for most of his only son’s under-18 career, holding him to the highest of standards throughout.

“I went out of my way to make sure people knew that I wasn’t favoring him—too much I think,” said Randy, who coaches two teams and serves as president of the San Diego Jr. Gulls. “I was hard on him, but he was so easy to coach.”

Moy’s rink served as a special hockey oasis for gifted Californian players. He played alongside future college stars like Nebraska-Omaha’s Austin Ortega and Boston College’s Thatcher Demko. His work ethic and attitude won the respect of his youth hockey teammates, who voted him captain on multiple occasions.

For high school, the Moys relocated briefly to Chicago, where Tyler won an Illinois state championship and his sister, who has committed to the Harvard women’s ice hockey team’s Class of 2021, developed her own game. Following graduation, he played 64 games with the USHL’s Omaha Lancers before entering Harvard as a true freshman—an unusual move in a sport in which the vast majority of Division I players take an extra year or two before making the jump to the NCAA.

“I thought from a hockey standpoint, I was definitely ready to step in,” Moy said. “I think I wanted to move on with my life, and I didn’t really want to take a year off from school.”

As the youngest player on Harvard’s roster, Moy had a quiet freshman campaign with 10 points in 27 games. He received little attention from professional teams in the lead-up to last summer’s NHL Entry Draft.

Yet Moy’s performance this season has put him firmly on scouts’ radars. Should another team not choose him in his final year of draft eligibility, Moy will attend the Calgary Flames’ development camp in July.

“He doesn’t talk much about [his NHL opportunities],” Randy said. “It’s really remarkable how mature he is about that kind of stuff. He just works hard and doesn’t get bothered about not being drafted.”

Moy’s biggest chance to prove himself this season came in December, when he stepped up to center the first line in the two-month absence of injured classmate Alex Kerfoot. Winged by star juniors Jimmy Vesey and Criscuolo, Moy thrived in the new position despite facing more difficult line matchups night in and night out. He has since returned to the position at which he started the season but has also accepted extra responsibilities on the power play and penalty kill.

“I think his getting more minutes has helped him,” Criscuolo said. “He’s a big contributor on the power play, and I think he kind of has that attitude that he can score and [that] he’s going to score if he gets the chance.”

Moy has a simple outlook on life. He says that he just wants to help people in any way that he can. It’s an outlook that motivates his career plans after hockey, which might include work in the physical therapy or medical fields, as well as his friendships at Harvard.

“He’s one of those deep thinkers, always trying to help people out,” says Grace Weghorst, a sophomore on the Harvard women’s volleyball team who became close friends with Moy after sharing the same freshman entryway. “He’s so intent on making sure people are happy and making sure other people are really doing well.”

A team-first outlook will also characterize his contributions to any line and any unit on the ice—in South Bend and beyond. As long as the Crimson’s run continues, Moy will find new ways to help.

“I think especially down this playoff stretch, I’ve really seen myself kind of amp up the encouragement for other players and try to get guys fired up,” Moy says. “I think a lot of players on the team are all buying into doing whatever we can to help out the team and encourage each other.”