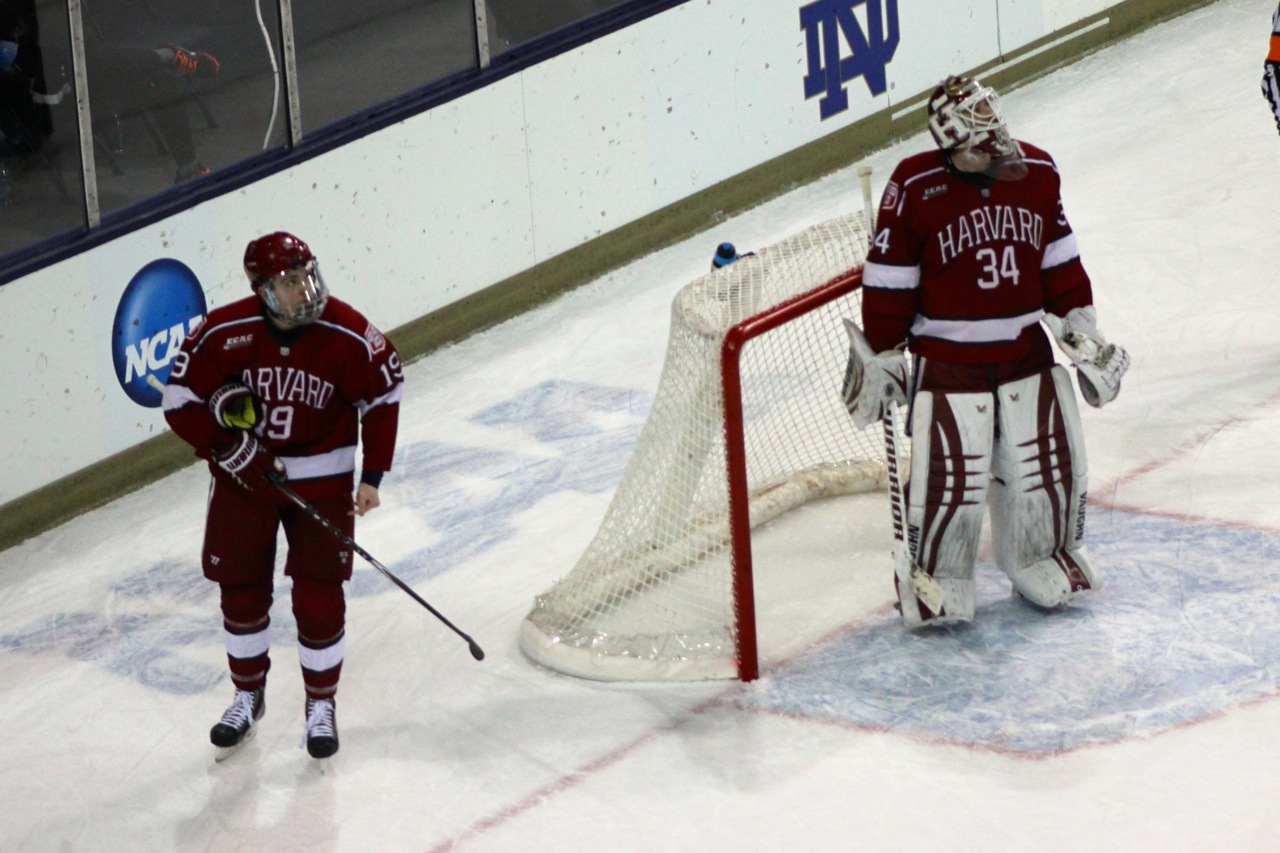 For the Nebraska-Omaha men’s ice hockey team, it wasn’t much, but it was enough.

Saturday at Compton Family Ice Arena, the Mavericks unceremoniously defeated Harvard, 4-1, in the Midwest Regional semifinals. Omaha freshman forward Avery Peterson produced what proved to be the game-winner with 1.4 seconds left in the first period on a two-man advantage, as the Mavericks held on with two empty-net goals in the final minute of their program’s first-ever NCAA tournament win.

The ECAC champions, meanwhile, were left still waiting for their first win in the Big Dance since 1994.

“I think we put ourselves in some spots where we made it difficult for ourselves,” Harvard coach Ted Donato ’91 said. “I thought our discipline all year has been great; I just think we made a couple of poor decisions.”

Jimmy Vesey scored the Crimson’s lone goal less than four minutes into the third to cut the Mavericks’ lead in half but finished the night fighting back tears.

The junior forward battled all night, stringing together consecutive shifts as time ran out on what could be his last collegiate contest.

“You’ve got to give Harvard credit—they are an excellent hockey team, and Vesey is for real,” Omaha coach Dean Blais said. “I don’t know if there is anyone in our league that’s better.”

The second-seeded Mavericks (19-12-6, 12-8-4-3 NCHC) forced the third-seeded Crimson (21-13-3, 11-8-3 ECAC) on its heels early with the game’s first goal at 1:59 in the first period. Harvard goaltender Steve Michalek (25 saves) got his pad on a shot from the top of the slot by Petersen, but freshman forward Grant Gallo pushed the puck over the line before Michalek could freeze it.

The goal stood after video review.

With 1:30 left in the frame, a boarding minor by fourth-year forward Colin Blackwell put the Crimson on an extended 5-on-3 kill. Harvard almost escaped the period down one, but Peterson slipped a wrister from the left faceoff circle past Michalek’s glove with just over a second remaining.

In a scoreless second period, Harvard struggled to get attempts on target and forced Omaha senior goaltender Ryan Massa (33 saves) to make only six stops. Yet the Crimson’s sticks came alive in the third period, as Vesey’s strike highlighted 19 Harvard shots on goal in the final frame.

“The team never showed any sign of quitting all year, certainly not tonight,” Vesey said. "We played hard until the final buzzer.”

Vesey’s 32nd and final goal of the season came on the left side of the crease, where the Nashville Predators prospect put back a rebound from junior defenseman Desmond Bergin.

Vesey finishes the year tied for eighth on the Crimson’s all-time single-season goal list, having recorded the most goals by a Harvard player since the 1990-1991 season. He will consider in the coming days his option to turn professional.

“Moving on, I think I’m going to sit down with Coach Donato and my family, as well, and just weigh my options and see where I’m at,” Vesey said.

Harvard threatened to equalize for most of the remainder of the frame but felt the burn of another untimely penalty as sophomore forward Luke Esposito boarded freshman forward Tyler Vesel with 2:30 to play.

Vesel capitalized a minute later, sliding in the first insurance marker of the night at 19:24 as Harvard skated 5-on-5 with an empty net. Sophomore forward Jake Guentzel put in another one from the neutral zone with four seconds left.

With the loss, Harvard concludes a season in which the team battled back from injuries to win its first conference championship since 2006.

“I couldn’t be prouder of this group—the perseverance and the toughness of just staying with it,” Donato said.

The Crimson enters the offseason with uncertainty. In addition to questions surrounding Vesey, it is unclear whether fourth-year players Patrick McNally, Max Everson, Blackwell, and Michalek will return next season.

Omaha, meanwhile, can look ahead to a bright future. Three freshmen scored for the Mavericks on Saturday in a landmark victory for the school.

“It’s a huge step for our program, but we’re not satisfied yet,” said Omaha co-captain defenseman Brian O’Rourke. “We are looking toward tomorrow, and the future, and the rest of the season as long as we can.”

The Mavericks will face the Rochester Institute of Technology tomorrow in the regional final. RIT became the first 16-seed to win an NCAA tournament game on Saturday, knocking off top-seeded Minnesota State, 2-1, in the first game of the day at Compton Family Ice Arena.