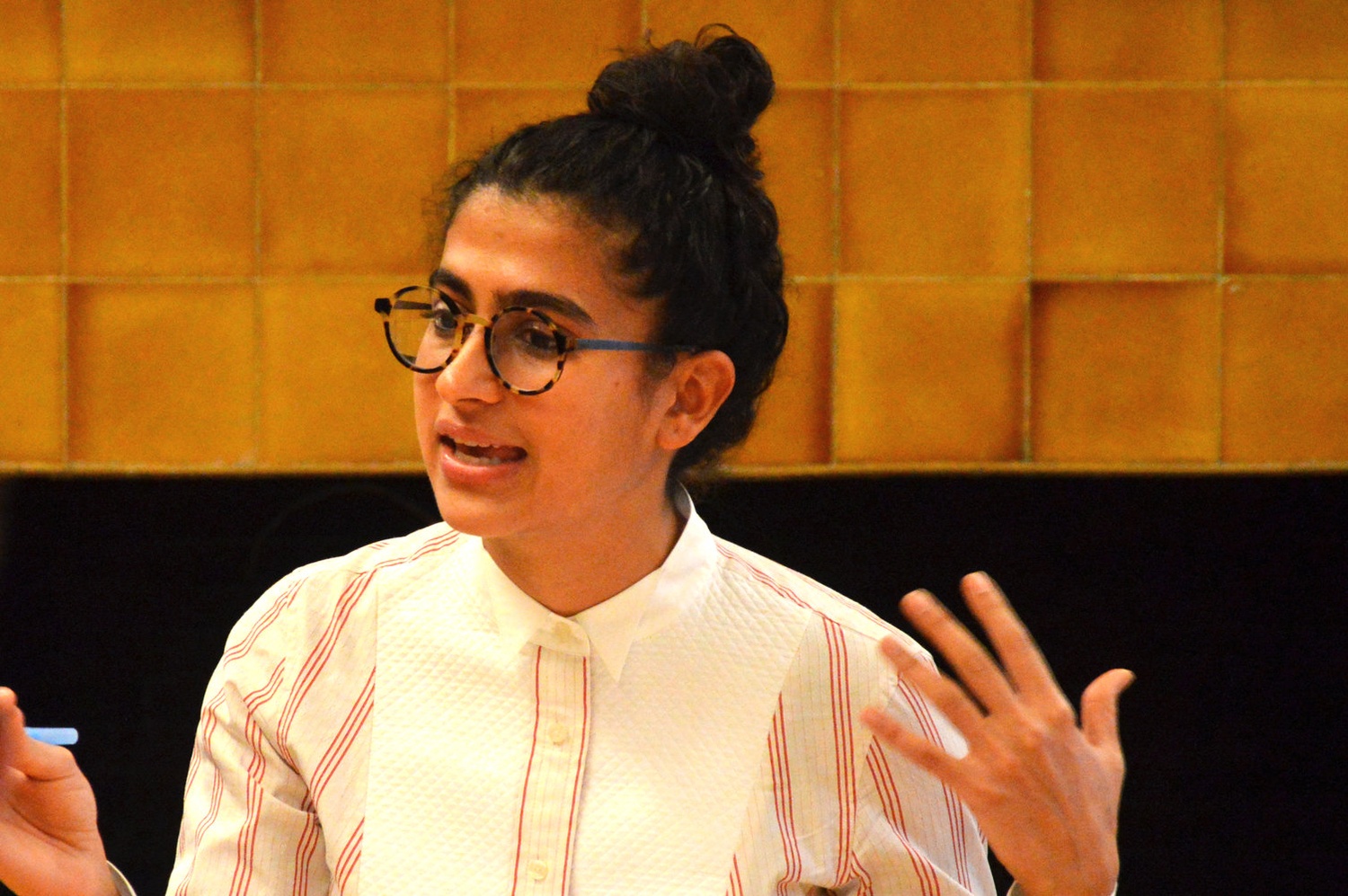 Kiran Gandhi leads an event entitled “Working and Performing in the Music Industry” at the OCS on Wednesday afternoon, where she talked about being both M.I.A.’s touring lead drummer and a student at HBS. By Gladys M Kisela
By Lily K. Calcagnini, Contributing Writer

Kiran Gandhi arrived at Crema Café, without fanfare, on a worn-out bike. Her composure, like her mode of transportation, was casual and down-to-earth. Gandhi, who graduated from Georgetown University with a double major in political science and math as well as a minor in gender studies, now splits her time between being a student at HBS and M.I.A.’s touring lead drummer. On Friday afternoon, Gandhi took the time to share her thoughts on the interrelation of feminism and drumming, intellectualism and art, and Atomic Living—her personal life philosophy.

The Harvard Crimson: When you’re drumming, you appear sublime as if you’re in another place. Can you tell me about that?

Kiran Gandhi: I think the coolest thing about drumming is that—because there’s not only four limbs that you have to be keeping track of, but it’s also playing with other people or to a track—you literally cannot think about anything else. Like sometimes when I’m in class, I’ll zone off…but with drumming, because it commands both your physicality and your mentality, it forces you to be present in a really sublime way, to use your word.

THC: Do you get that feeling anytime else?

KG: I get that feeling when someone empowers me with a new skill set or a new framework.

THC: How do you ensure that you devote enough time to these things that empower and excite you most?

KG: I have a way of thinking about this, which is that not only do I like to be focused, but I also like to be spontaneous. And so I always think about, what are the four or five things that matter to me most in this phase of my life—and this past year it’s been feminism, drumming, business, fitness, and Portuguese—and I basically try to hit as many of those every single day in whatever way possible…I say, “Okay, these are the things that need to grow, and I’m gonna allow spontaneity to nourish them in whatever way.”

THC: It sounds like we’re talking about Atomic Living, your philosophy on filling your time only with activities that invigorate or excite you?

THC: And Atomic Living really embraces spontaneity. How do you practice that philosophy while also avoiding the temptation to jump at every interesting opportunity that comes your way?

KG: If I feel like my drumming is being nurtured by something, I’m okay with that. I don’t try to take on more in that area…. For me, when I have those four or five tenets, if one of them is being nurtured, I try to make sure that others of them are being nurtured. Because I know that’s when I’m happiest.

THC: You’ve described how you perceive farce in the way that in America we try to be productive, and so we separate our artistic passions from what we “do” professionally. What exactly do you mean by this?

KG: Yes!…. The people who in the beginning say “…I’m gonna keep feeding this passion,” that’s kinda what happened to me. And I look back on that and I think that’s why the M.I.A. gig was able to take off, because I kept feeding it…and basically…I shifted from that moment where I said, “Oh, I play the drums. Oh, I like to play squash. Oh, I have 10 extra activities that no one cares about” to “I’m a drummer.” It’s an identity.

THC: What was the most exciting discovery you made as Interscope’s first digital analyst?

KG: 50 Cent was about to put out his next single and the question was, “Do we want to release the single on iTunes first, or do we want to release the video on YouTube first?”.... So I decided to take all the top 20 most-grossing singles from Interscope from 2012…and my analysis showed that the sweet spot was actually to put out the single first on iTunes and then release the music video on YouTube between 10 to 14 days out…Basically by doing that strategy, you get this double spike in sales that wouldn’t exist otherwise.

THC: Are you involved in anything at Harvard that you didn’t foresee doing?

KG: Yes. I’ve been running…. The thing about running is that Boston people, they’re so resilient.… So that’s one thing that I’ve learned…is this discipline of, “No excuses, man.”.... If you…train that mental thinking through your running, and then you take it and you apply it to feminism, to drumming, to the music business, to learning a language, you can be successful.

THC: You mentioned in a talk you gave on Wednesday that M.I.A. is critical of your Harvard education, but you’re grateful for it. How do you reconcile believing in something and also being critical of it?

KG: I think having M.I.A. as a bit of a critical mentor…was very good because it reminds me while I’m here [to] take what you learn and don’t forget that a commitment to improving gender equality in the music industry is your thing. And stay with that, and use what you learn here to fix that.