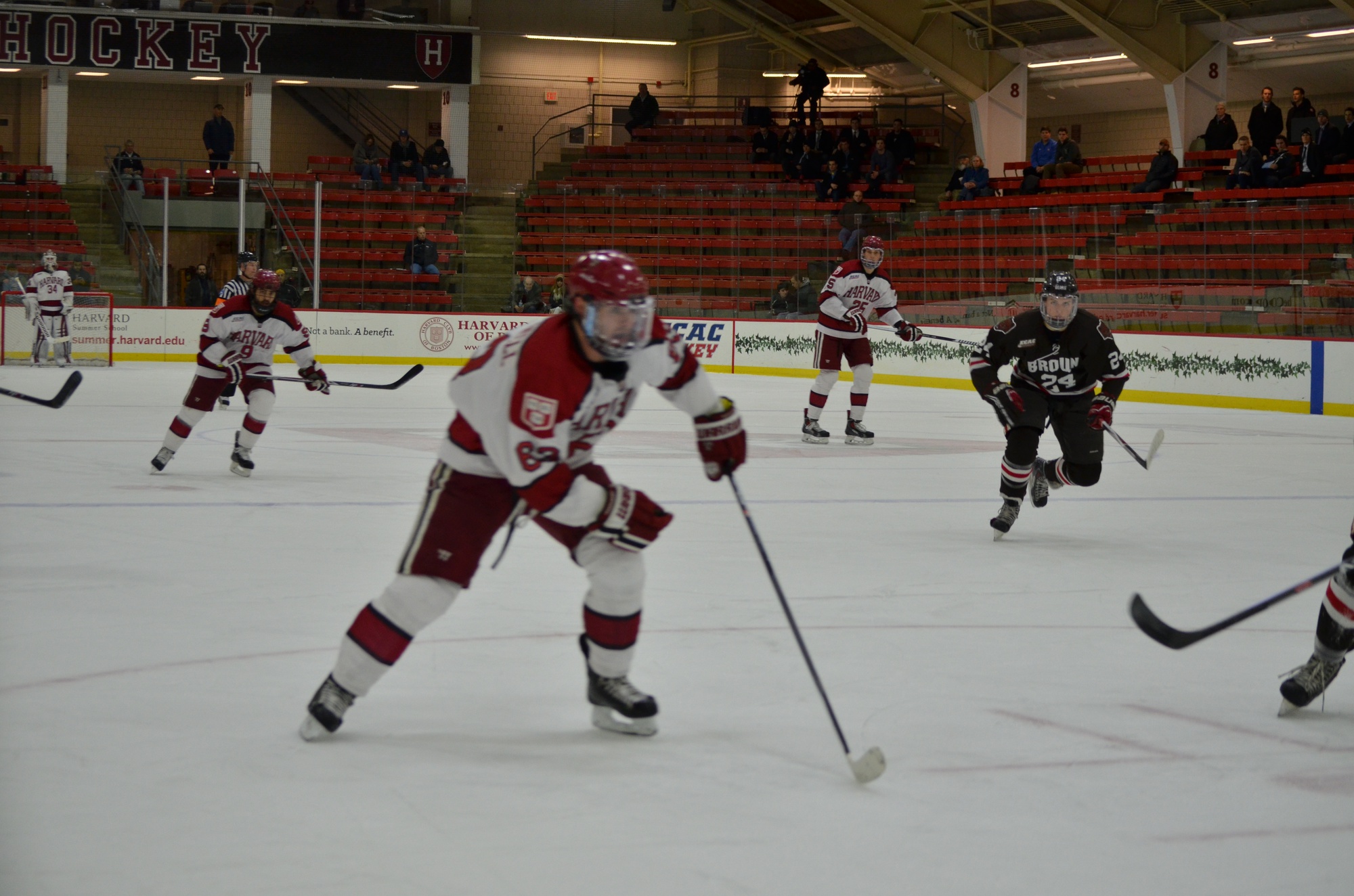 The Harvard men’s ice hockey team entered postseason play on Friday with a new look on its second line. So far, it looks good.

In just his second game on the Crimson’s second line after an extended injury, fourth-year right wing Colin Blackwell scored twice as sixth-seeded Harvard (16-11-3, 11-8-3 ECAC) beat 11th-seeded Brown (8-19-3, 5-14-3), 6-2, in Game 1 of the first round of the ECAC tournament. Junior forward Jimmy Vesey also had two goals and an assist to help the hosts pull away early.

“We were able to play with a lead and play an intelligent hockey game,” Crimson coach Ted Donato ’91 said. “[We did] not have to reach and take a lot of chances once we got the lead.”

After drawing an interference call on a rush up the wing, Blackwell found the back of the net for the first time in months. The San Jose Sharks draft pick fed sophomore linemate Luke Esposito at the point and then collected Esposito’s rebound in the slot before beating Brown sophomore goaltender Tim Ernst glove-side.

It was Blackwell’s first goal since Jan. 9, 2013, when he scored the tying mark in a 6-5 Harvard comeback at Boston University. Blackwell missed all of the 2013-2014 season and all but three games of the 2014-2015 regular season with concussion-related symptoms.

“He’s gone through a lot of trials and tribulations,” Brown coach Brendan Whittet said. “I don’t feel happy that he scored two on us, but you’re always happy when a kid can overcome those scary concussion symptoms and issues.”

Blackwell’s second of the night was another high-skilled tally—a near side finish from the right circle that put the Crimson up, 5-1, with under 11 minutes left in regulation.

“It is a credit to him that without the amount of games that it would take somebody to stay sharp, he’s worked very hard to play at that kind of speed and with that kind of skill,” Donato said. “It’s a tribute not only to Colin but also to the training staff.”

With the emphatic return of one star, Harvard lost another. Sophomore Alex Kerfoot left the game late in the first period after colliding with a player in the Brown zone and would leave the arena in a right sling.

An upper body injury in the first game of last year's conference tournament forced the first-line center to miss postseason play last year. His status for the rest of this tournament is unclear.

“I guess we’ll probably check in the morning, but hopefully it’s not too bad,” Donato said.

Criscuolo opened the scoring at 3:57 on the power play, tapping in a cross-crease feed from Vesey at the left post.

Vesey connected on a one-timer in the left slot a period later off a behind-the-goal-line feed from classmate Brian Hart. Sophomore defenseman Clay Anderson set up Vesey’s second strike—a breakaway from the blue line—with a stretch pass at the Crimson goal line at 14:15 in the third period.

“He’s been remarkably consistent,” Donato said of Vesey, who was named the Ivy League’s Player of the Year on Thursday. “You expect great players to be important at this time of year, and he certainly was great tonight.”

Jake Horton scored early in the second period less than a minute after Vesey’s first goal to give Harvard a 4-0 lead. The sophomore forward redirected a behind-goal pass from sophomore center Sean Malone past the pads of Ernst, whom Whittet immediately pulled in favor of classmate Tyler Steel.

“He made some important saves and had some flurries of saves,” Donato said. “Not only did he make the saves, but he looked calm and collected back there, and I think that is something that is kind of felt throughout the team.”

First line forwards senior Matt Lorito and junior Nick Lappin had Brown’s only goals of the night. Lorito struck from the left point on the power play seconds after the expiration of a two-man advantage at 11:17 to draw the game to 4-1. Lappin added the game’s final marker with a close shot through traffic with just over three minutes left in regulation.

As time expired, the Bears looked ahead to Saturday. The game ended in a line-wide altercation with 1:19 left after Anderson boarded a Brown player on the right side of the Harvard zone, leading to penalties to three players. Whittet’s squad will need to find something extra this weekend in order to avoid an early end to its season.

“They’re a very gifted hockey team,” Whittet said of the Crimson. “We gave them some life, and they were really coming in waves on that forecheck. We were over-handling pucks, and I thought our [defensemen] got overwhelmed a little bit.”