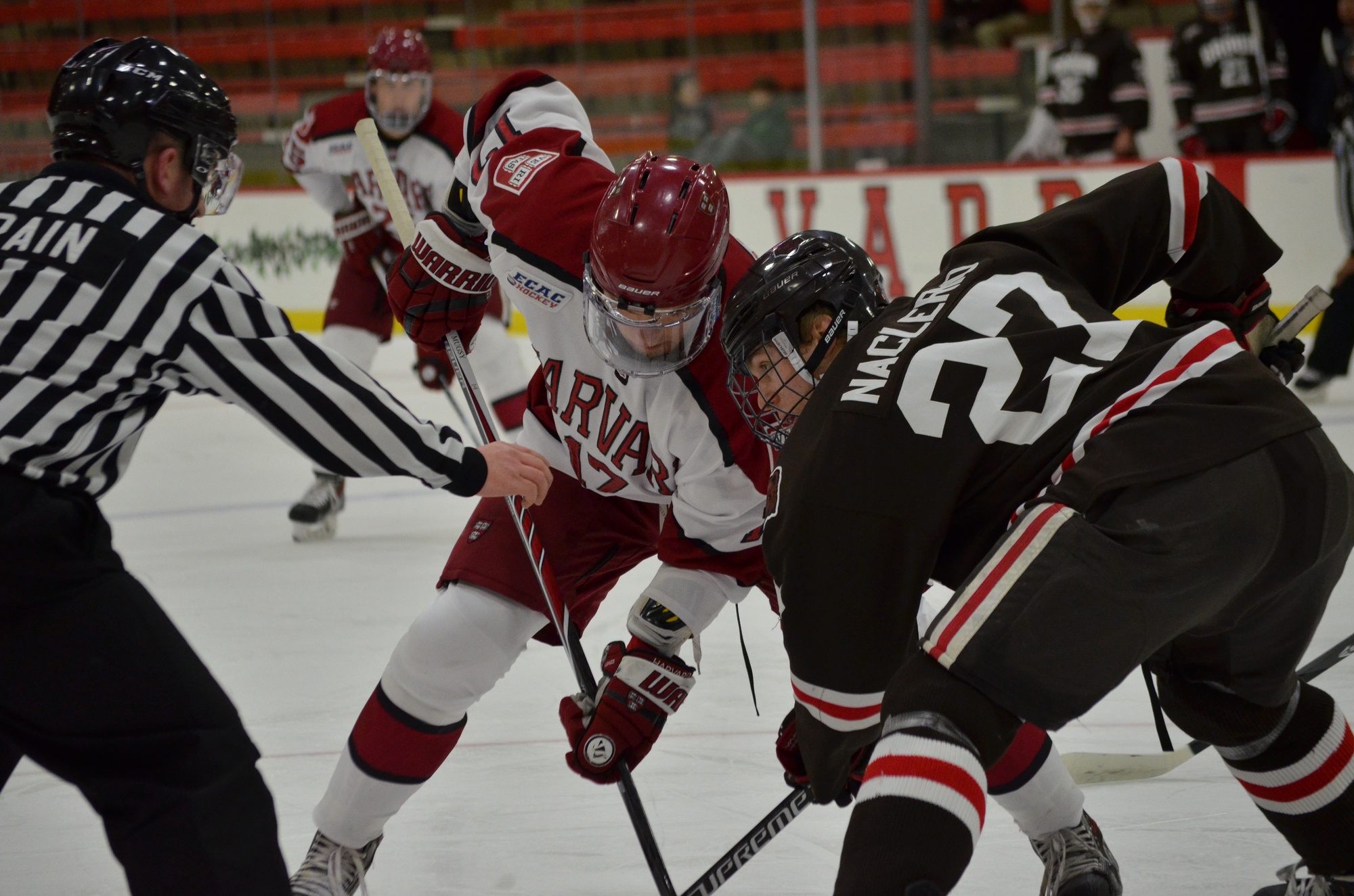 The Crimson punched its ticket to the next round after its Game 2 victory Saturday against the Bears. By Dominic C. Glover
By Michael D. Ledecky and Jake Meagher, Crimson Staff Writers

Riding three unanswered first-line goals in the first period, the No. 19/- Harvard men’s ice hockey team held on for the series sweep on Saturday night, beating Brown, 4-3, in Game 2 of opening round ECAC tournament play at the Bright-Landry Hockey Center.

“[The win] feels great,” Harvard coach Ted Donato ’91 said. “Brown deserves a lot of credit. They stayed with it and kept it very interesting at the end.”

In the game’s final seconds, Brown captain Matt Lorito had one final opportunity at the right side of the Crimson net to extend his storied career, but fourth-year goaltender Steve Michalek’s pad took away an opening at the post as time expired.

Harvard will now play out the rest of its season on the road, starting with Game 1 of a best-of-three quarterfinals series against Yale in New Haven on Friday.

“I think we’re kind of getting back to our peak form,” said junior forward Jimmy Vesey, who finished the game with a goal and two assists. “We couldn’t be happier going to Yale.”

After surrendering the first four goals of the contest on Friday, the Bears got on the board first on Saturday. After Brown junior Mark Naclerio beat junior Crimson co-captain Kyle Criscuolo cleanly on a faceoff in the attacking zone, classmate Nick Lappin beat Michalek (24 saves) from the slot to give the visitors an early lead.

But the Bears’ advantage would not last long, as junior forward Jimmy Vesey found an answer just over five minutes later. Criscuolo forced a turnover behind the Brown net and cycled the puck to Vesey, who skated between the faceoff dots before launching a wrist shot that found the netting.

The goal sparked a period to remember for the Crimson first line, which was without the services of sophomore forward Alex Kerfoot, who suffered an upper body injury in Game 1.

Midway through the period, Criscuolo, whom Donato moved to Kerfoot’s position at center, followed up his assist with a goal of his own, picking the top corner of the net from his forehand to beat the glove of sophomore Bear goaltender Tim Ernst. Then at the 17:52 mark of the frame, the newest member of the top line struck, as junior right wing Brian Hart caught Ernst looking the wrong way on a wraparound attempt to double the lead.

With a secondary assist on Hart’s goal, Vesey became the first Harvard player since Dominic Moore ’03 to score 50 points in a season.

“This weekend I think we were firing on all cylinders,” Vesey said. “Hopefully we can keep that going.”

After the intermission, the Crimson offense kept rolling. Following up a two-goal performance in Game 1, Blackwell sent a wrister in the high slot past Ernst to extend the lead to 4-1. The fourth-year forward made his return to the ice on the final weekend of the regular season after missing the majority of the last two years due to concussion-related symptoms.

But unlike Friday when Harvard’s 4-1 lead eventually became 6-1, Brown fought its way back. Bear sophomore Davey Middleton, who left the ice after taking a hit to the head from second-year center Sean Malone midway through the first period, returned in a big way in the second, punching home a second-chance opportunity near the crease. A period later, the Bears cut the gap to one on Lappin’s second score of the night at 11:07.

“We’re not fully ecstatic with the way we finished the game,” Donato said. “We stopped skating a little bit. I thought we made some safe plays, but there were better plays as far as just playing the game.”

Nonetheless, Donato’s squad held its own in the final eight minutes of play to seal the game and the series. With a trip to Lake Placid on the line, Harvard will now prepare for a Yale opponent that has dominated the teams’ rivalry as of late.

“We’ll have our work cut out for us, but we’re excited about the challenge,” Donato said.