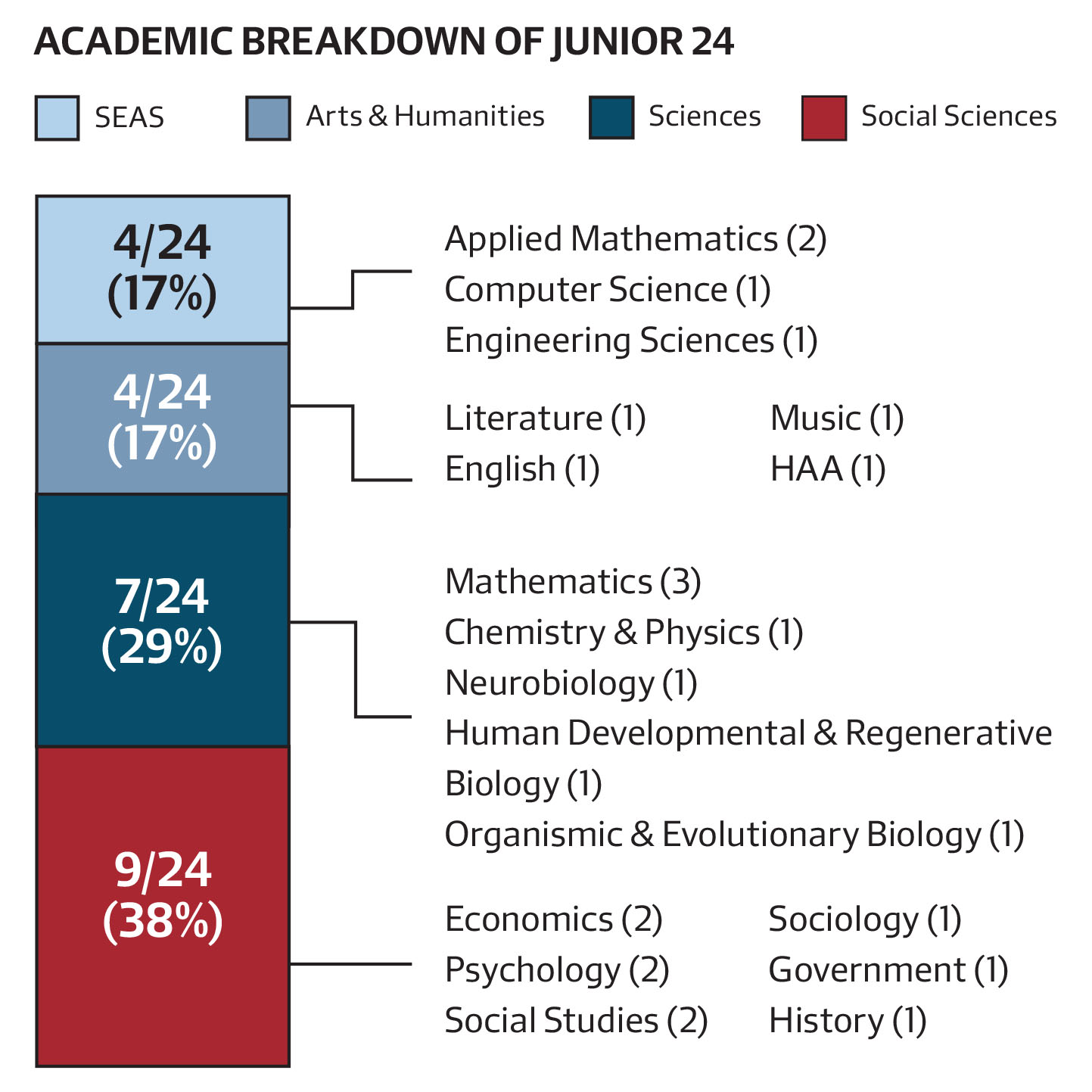 Social sciences was the most represented in the Class of 2016's "Junior 24" elected to Harvard's chapter of honor society Phi Beta Kappa.
By Annie E. Schugart, Crimson Staff Writer

The names of the 24 juniors elected to the Harvard chapter of Phi Beta Kappa, the oldest undergraduate honors society in the United States, were released on Thursday. The Mathematics Department was most heavily represented with three concentrators among the elected.

Social sciences was the most represented in the Class of 2016's "Junior 24" elected to Harvard's chapter of honor society Phi Beta Kappa. By Helen Bae

Selected students were notified Monday. Jeffrey Berg, assistant director of the Office of Undergraduate Research and Fellowships, released the list on Thursday.

“It’s such an honor to be eligible for it,” said Aaron Z. Roper ’16, a Government concentrator in Leverett House, “but to actually get it—you have to temper your expectations a bit when the pool is so impressive. I was really happy to receive it.”

Roper said he has taken a wide range of courses throughout college, ranging from large introductory classes to more focused concentration classes as well as math classes for his secondary.

“I was definitely not expecting to get in. I was only hoping,” said Melody Y. Guan ’16, a concentrator in Chemistry and Physics and an inactive Crimson news editor. “I had this faint hope in my heart that maybe I could be so lucky to speak for this honor one day. It was really, really exciting.”

Guan is working towards a joint masters degree in statistics, and said she is very interested in biology. Guan attributed her selection in part to the breadth of her academic career.

Two other students in Guan’s blocking group were also selected as members of the Junior 24.

Ryan D. Chow ’16, a Human Developmental and Regenerative Biology concentrator in Pforzheimer House, said his courses have been primarily science-related, though he has taken several music classes. He, too, mentioned the importance of breadth.

Roper and Chow both attributed a significant portion of their success to faculty and mentors, and pointed out the importance of finding good mentors early on.

“I don’t think anyone really expected it to happen, so it was very humbling,” said Chow. “Everyday I’m walking around and there’s all these brilliant people and I do wonder if I’m supposed to be here or not, so it was great.”

The complete list of the 24 juniors elected to Phi Beta Kappa is as follows:

An earlier version of this article incorrectly stated Erica X Eisen's concentration due to erroneous information provided by Harvard's chapter of Phi Beta Kappa. In fact, Eisten concentrates in the History of Art and Architecture, not Literature.