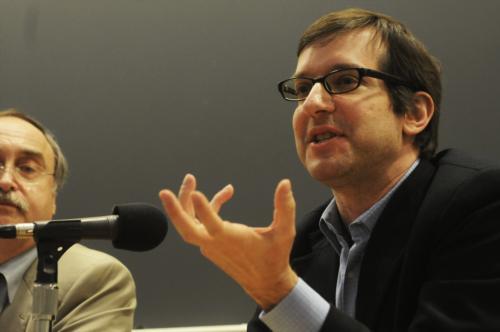 Professor David Laibson ’88 was joined by three other psychology, neuroscience, and economic scholars yesterday in Harvard Hall at the ‘Symposium on Economic Decision Making,’ which sought to reexamine the economic assumption of people as perfectly ration
By Theodore R. Delwiche and Mariel A. Klein, Crimson Staff Writers

As Harvard prepares to launch a sexual conduct climate survey on April 12, administrators are emphasizing the confidentiality of the poll and are executing an aggressive publicity push to draw respondents.

The survey, which is a Harvard-specific version of an Association of American Universities poll being conducted at 28 schools this month, will be released through individualized links to all students at Harvard on April 12 and will be open until May 3.

According to Economics professor David I. Laibson ’88, a member of the University’s sexual assault task force who helped spearhead the design of the national survey, the poll will ask questions on topics ranging from sexual misconduct to affirmative consent to the investigatory and support resources Harvard offers. Laibson said the survey will stay away from certain catchall words such as “sexual assault” and “rape,” and will instead describe specific acts of sexual misconduct, such as penetration or sexual touching.

Those who participate will receive a $5 Amazon gift card for taking the survey, which Laibson estimates will take around 20 minutes.

The survey release comes almost year after a committee formed by University President Drew G. Faust and chaired by former Provost Steven E. Hyman requested funds for such a poll. In the 11 months since the survey was announced, Harvard has also rolled out a centralized approach to dealing with alleged cases of sexual harassment and increased funding for the Office of Sexual Assault Prevention and Response.

Administrators appear to see the climate survey as another significant step. On Friday, students will receive an email from Faust urging them to participate. On April 12, they will see an email from the research company Westat with a link to the poll.

“I very much want it to come from the highest levels of Harvard and to emphasize how important it is that people participate,” Faust said last month.

Administrators have been working behind the scenes for months on how to best publicize the climate survey because similar surveys across different universities have historically drawn low response rates.

The Faust message will be followed by similar emails sent to every student from other Harvard administrators and leaders. Many students will also be reminded of the survey around campus; Harvard has planned a coordinated publicity campaign including posters, ads atop dining hall tables and projected onto screens in common areas, and messages emblazoned on shuttle buses driving the Cambridge streets, according to Leah Rosovsky ’78, a University vice president for strategy and programs.

Harvard has also purchased advertisements in The Crimson’s online and print platforms, according to Rosovsky. For a month, the University will illuminate the dome of Memorial Church in teal—the official color of Sexual Assault Awareness Month, which is April.

As they promote the survey, administrators are emphasizing that all responses will be confidential. Once students click through to the Westat site, Laibson said, “anything that could re-identify them is severed from the record,” including IP addresses and email addresses.

The second priority, Laibson said, is transparency. When the results are tabulated and released—Laibson said the University is aiming for a September announcement date—administrators hope to release detailed breakdowns, if the response rate is high enough that the figures do not risk re-identification.

“The more school-specific data we can make public, the more the community will be informed, and we’ll have thoughts about what we should do to put the data at work in the service of prevention,” Laibson said.

After the results are released, the same task force that proposed the survey will make recommendations for how to decrease the incidents of sexual assault, encourage reporting, and ensure reporting bodies are effective, according to Hyman, the body’s chair. Hyman added that he thinks the survey forces the task force to address the sources of misconduct it identifies.

“Clearly the task force will make recommendations that, within the capacity of the University and the law, we address those things,” Hyman said. “By doing this survey, we’ve made it impossible to look away from these problems, even if they are difficult to take on.”

Next fall, Harvard will be able to compare its results to aggregate data from all 28 schools compiled by Westat. Laibson said he hopes all schools scrutinize the data and learn from each other’s practices.

“That variation is where a lot of the learning will come from: different schools with different prevalence rates,” Laibson said. “That’s a clue to where problems arise and where solutions exist.”