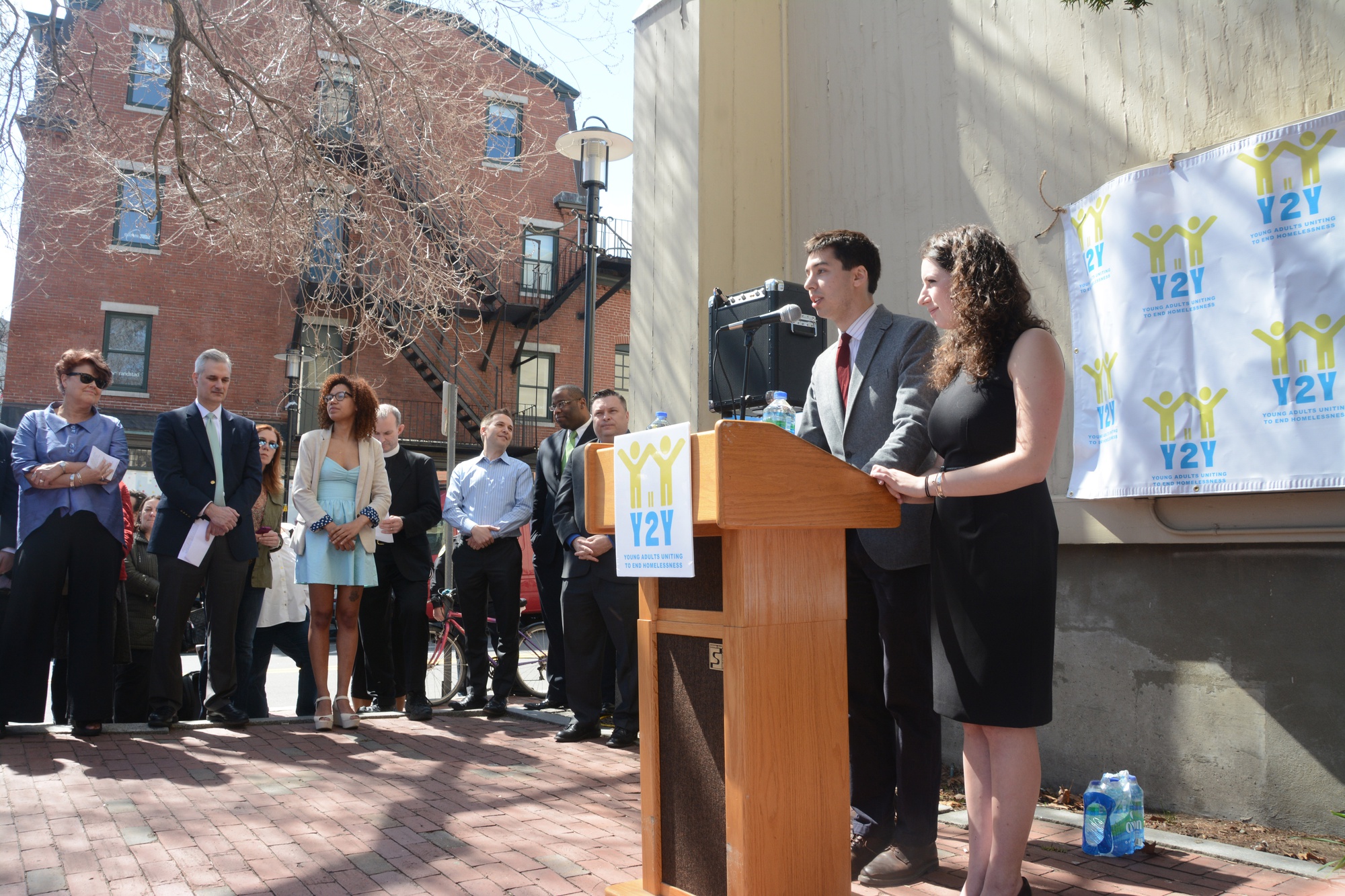 Samuel G. Greenberg ’14 and Sarah A. Rosenkrantz ’14, speak at the Y2Y youth homeless shelter launch event outside First Parish in Cambridge Monday. The shelter is set to open this November. By Annie E. Schugart
By Sara A. Atske and Annie E. Schugart, Crimson Staff Writers

Harvard alumni working to bring a student-run youth homeless shelter to Harvard Square celebrated their progress on the project on Monday at a launch event outside the First Parish in Cambridge—the Unitarian Universalist church that will house the shelter when it is slated to open in November.

The youth homeless shelter—which will be run by Y2Y Harvard Square, the initiative previously called the Harvard Square Homeless Shelter’s Youth Housing Initiative—will be located in the basement of the First Parish, whose congregation approved the collaboration late last month. It will operate alongside a daytime drop-in center for homeless youth called Youth on Fire. 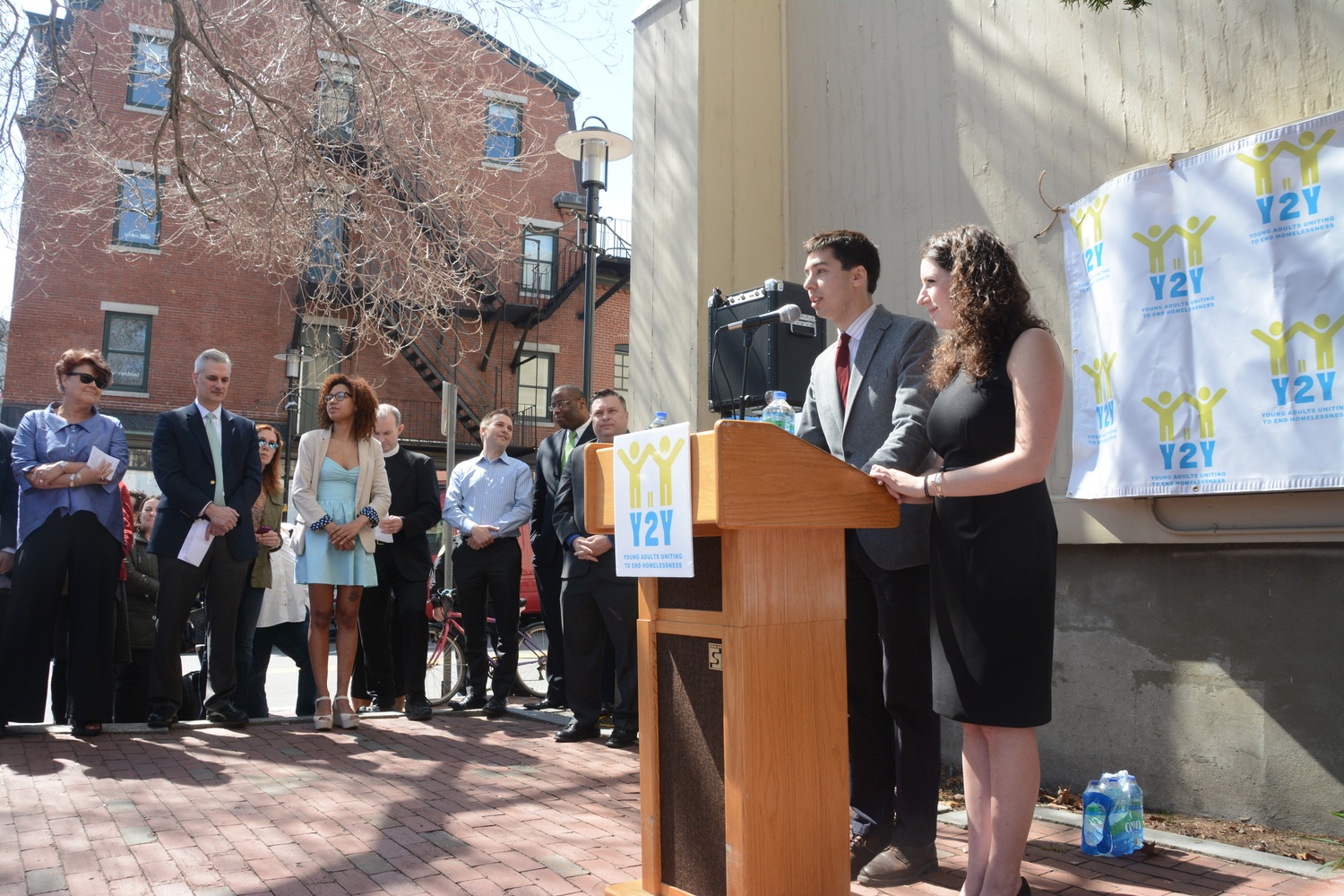 Samuel G. Greenberg ’14 and Sarah A. Rosenkrantz ’14, speak at the Y2Y youth homeless shelter launch event outside First Parish in Cambridge Monday. The shelter is set to open this November. By Annie E. Schugart

At the launch event Monday, Y2Y Harvard Square co-directors Samuel G. Greenberg ’14 and Sarah A. Rosenkrantz ’14 unveiled designs of the shelter, which is scheduled to open on Nov. 1 and hold 20 beds. Organizers have raised 75 percent—more than $950,000—of their $1.25 million funding goal, according to a press release. A 15-year contract with the Cambridge Housing Authority for more than $50,000 in annual funding will cover more than 50 percent of the shelter’s operating budget.

At the launch event, speakers emphasized the importance of providing shelter to homeless youth in Cambridge, and specifically LGBTQ-identified youth.

“Our peers are aging out of foster care without adequate support; they are being kicked out of their homes for who they love or who they are, and they are fleeing unsafe or unsupportive environments,” Rosenkrantz said in her speech at the launch. “For so many of our peers, home is a park bench, a sidewalk, or an unsafe adult shelter.”

Speaker Jamila Bradley, 22, who identified herself as a queer black female, provided the perspective of a former homeless young person at the launch event. Other speakers included Cambridge City Councillor Marc C. McGovern, and Denise A. Jillson, the executive director of the Harvard Square Business Association, among others.

Following a press conference, organizers celebrated with a reception at Phillips Brooks House.

Isabelle Yang ’17, Y2Y’s data director, referenced the large proportion of the homeless youth population that identifies as LGBTQ and the lack of available beds for homeless young adults in an interview at the reception. “I could not live with myself knowing I had such a close connection to all those issues and the cause and not doing anything about it,” she said.

Yang said she will be responsible for collecting data, using it to evaluate the effectiveness of the shelter, and providing “continuous conversation between the guests, us, and the numbers,” when the shelter launches. She will serve one shift each week supervising the shelter.

—Staff writer Sara A. Atske can be reached at sara.atske@thecrimson.com. Follower her on Twitter @sara_atske.