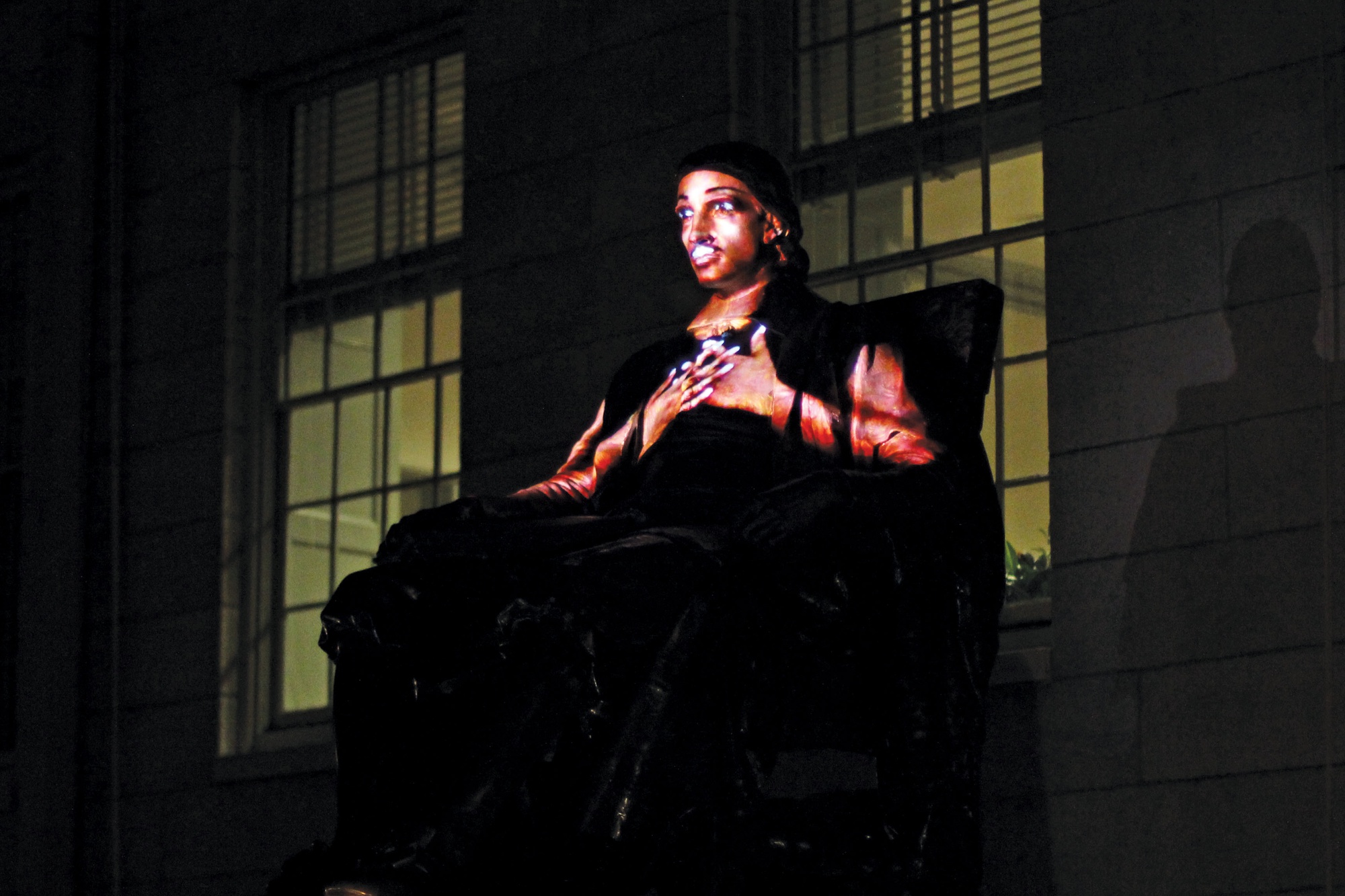 Artist Krzysztof Wodiczko projects recorded videos of students on the John Harvard statue Tuesday night. Wodiczko used the statue as a medium through which to voice concerns about job security and fears about not being able to make a difference in the world, while drawing upon themes of loneliness and disconnection.
By Hellary Y. Zhang, Contributing Writer

An art installation featuring student faces projected onto the John Harvard Statue and an accompanying audio track of their voices debuted on Tuesday night in the first work that Krzysztof Wodiczko, a professor at the Graduate School of Design, created on Harvard’s campus.

Wodiczko, an artist renowned internationally for his projections and artworks in the public domain, designed the artwork to feature the faces and voices of undergraduate and graduate students. Approximately twenty student participants volunteered to share their perspectives, Wodiczko said. 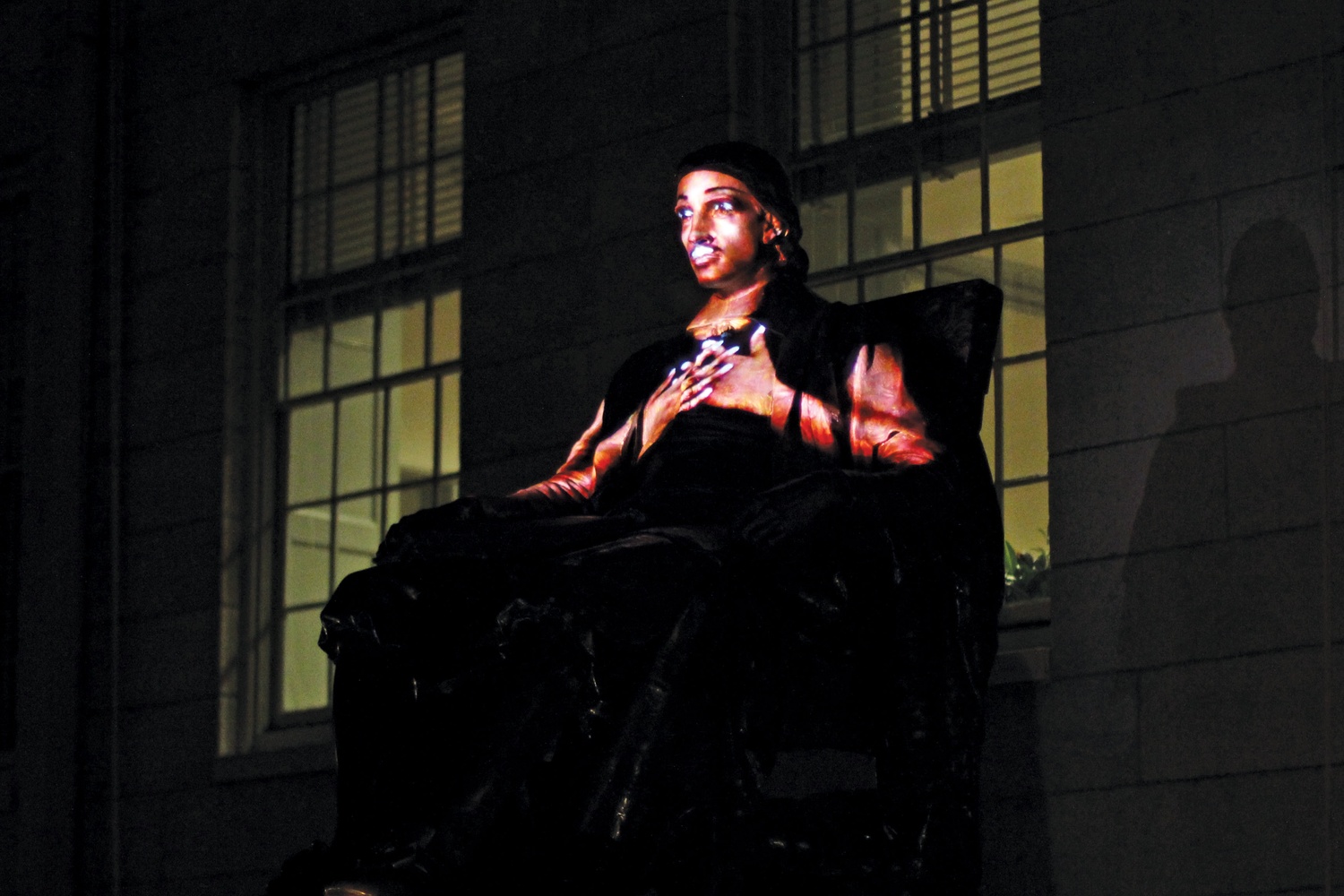 Artist Krzysztof Wodiczko projects recorded videos of students on the John Harvard statue Tuesday night. Wodiczko used the statue as a medium through which to voice concerns about job security and fears about not being able to make a difference in the world, while drawing upon themes of loneliness and disconnection. By Katherine L Borrazzo

The projection was commissioned by the Harvard University Committee on the Arts as part of “Harvard’s strong commitment to increasing the presence and accessibility of art on campus,” Lori E. Gross, associate provost for arts and culture, wrote in an e-mail.

The installation was intended to launch on Monday but was delayed due to the weather. It will run every evening until next Monday, April 27th.

According to Wodiczko, he was encouraged by GSD Dean Mohsen Mostafavi to create a project right on Harvard’s campus.

“People know that I am developing those projects all over the world,” Wodiczko said. “I was approached with a question that perhaps I should be doing something here on the campus as well.”

Upon agreeing to develop artwork at the University last fall, Wodiczko thought of many potential sites but eventually chose the John Harvard statue.

“This sculpture is already a kind of projection-animation in itself because the sculptor [Daniel] Chester French was clever enough...that rather than depicting John Harvard, he choose one of the students, or some kind of idealized type of student to impersonate Harvard,” Wodiczko said. “Since it already happened I thought maybe I should continue this and create conditions for students to animate this ‘student,’ one student who stands for Harvard.”

With the help of the Office for the Arts, Wodiczko was able to attract a diverse group of student participants, he said.

Looking back on the many perspectives shared within the artwork, Wodiczko found that the projection was an “eye-opener,” allowing him a glimpse of the student experience at Harvard.

“I realize how exciting, and at the same time how difficult, it is for the [students] to jump into the way Harvard University operates and so forth,” he said.

Lylee Kazem, a master’s student at the Graduate School of Education, emphasized the projection’s capacity to display Harvard’s diverse community.

“People who have crossed this statue have come from every corner of the world, represent every mindset and belief out there. That’s powerful,” Kazem said.

For senior Zeenia L. Framroze ’15, Wodiczko’s project offered her the opportunity to reflect on her Harvard experience.

“It was a good capstone to my senior year,” she said.