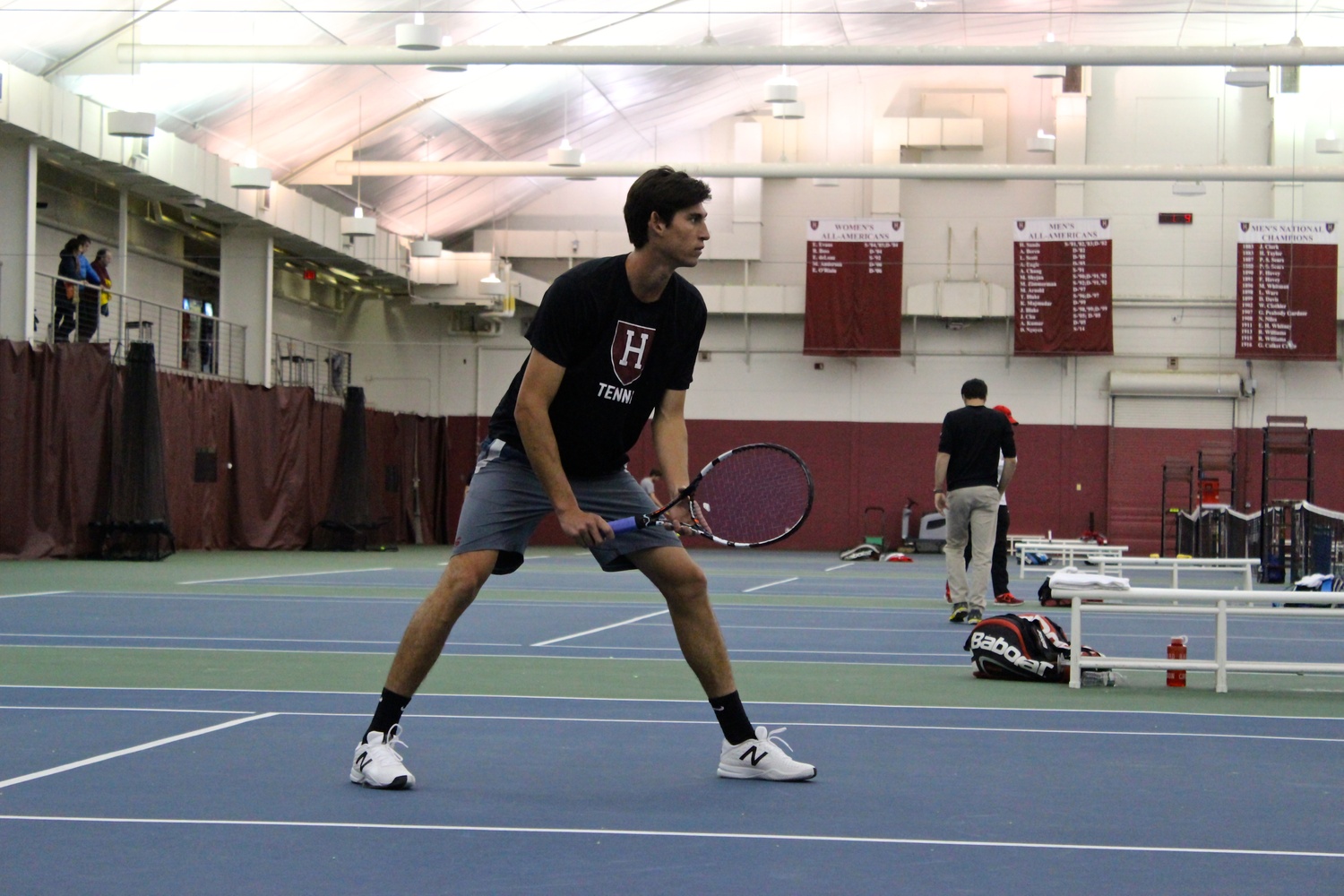 In its Ivy League openers, the No. 36 Harvard men’s tennis team split a hotly contested pair of matches this weekend, taking down No. 55 Cornell, 4-3, on Saturday, but falling short against No. 28 Columbia on Sunday.

Seven of the eight Ivy squads are ranked nationally, and the No. 36 Crimson (15-6, 1-1 Ivy) started its season quickly with the Big Red and Lions (10-5, 3-0), last season’s defending champions and presumptive favorites.

“[The Cornell match] was a great match for us,” co-captain Alex Steinroeder said. “We were a little rusty in spots, so [we] got that out of the system. Even though we lost today, we played a much better match than against Cornell, so are happy about that.”

In front of a raucous crowd at the Murr Center, Harvard kicked off its conference slate with one of its biggest matches of the year. Last season, Columbia snatched the Ivy crown from Harvard after the Crimson took home the title in 2012 and 2013.

Although Columbia entered the weekend at just 8-5, the record was perhaps misleading, with the Lions having faced eight top-25 teams on the year. After Sunday’s victory, Columbia has three Ivy wins on the season.

In doubles, Harvard started out fast, as sophomore Brian Yeung and co-captain Denis Nguyen seized control of a hotly contested match, putting away an overhead to close out the match on the first court, 6-2. But sophomore Sebastian Beltrame and junior Nicky Hu went down, 6-3, on court two, leaving the match up to Steinroeder and junior Kelvin Lam at third doubles. Lam helped save a few match points, but Columbia eventually closed out the 6-3 victory to take the 1-0 lead.

“[Losing the doubles point] changes everything,” Harvard coach Dave Fish ’72 said. “Against a team that good, it’s hard to come back from. That gave them enormous confidence going into singles.”

The Lions came out firing in singles, as they took each of the six first sets. The Crimson fought back in the second sets, as Steinroeder and Hu won on courts five and two, respectively, and Beltrame saved match point to take the second set, 7-5, sending the crowd into a frenzy.

Eventually, Harvard pushed the Lions to five third sets. But Nguyen fell, 7-5, 6-3, to Columbia’s Winston Lin, ranked 21st nationally, to put Harvard down, 2-0. When Hu went down, 6-2, in the third set, the Crimson was on the brink. Steinroeder’s 6-4 loss in the third provided the final margin of victory.

“It was really cool to see everyone fight back after losing the first sets,” Steinroeder said. “It would’ve been easy to go down after that, and it was really good to force five third sets.... Everyone’s happy with the way they competed today.”

In Saturday’s match, the Crimson’s freshmen helped put the team over the top to deliver a victory in its Ivy season opener.

The Big Red, which opened its Ancient Eight season with a 6-1 loss to the Lions last weekend, put up a strong fight, but Harvard was able to slip by.

In doubles, Harvard’s top tandems carried it to victory, taking victories on the top two courts with identical 6-4 marks.

Hu extended the Crimson’s lead with a 6-4, 7-5 victory at No. 2, but with Cornell taking early leads at the other slots, the match remained very much up in the air.

The Big Red eventually tied up the match at 2, and after Yeung was swept on court three, 5-4, 6-4, Harvard stood on the brink of defeat. But Nguyen closed out his match, 7-6, 6-3, leaving the result up to the freshman Kenny Tao on court six.

After rebounding from a 3-6 loss in the first set, Tao closed out Cornell senior Alex Sidney to give Harvard the win.

“Kenny fought back against a seasoned, tough player,” Fish said. “He found the right strategy to play against him, which was great.”

The Crimson still has some kinks to work out, primarily at third doubles, where it started two different lineups this weekend.

“It’s been a struggle trying to figure out the right team,” said Steinroeder, who competed at third doubles against the Lions. “We played well, but have had some trouble in that spot. Hopefully, results will start coming.”

In the meantime, Harvard will continue to compete for the Ivy crown, and its NCAA hopes remain alive.

“If we were ranked much lower, our NCAA hopes would be over,” Fish said. “But they’re not. If we continue to play well like we have, we can easily still make the NCAA Tournament.”

—Staff writer Justin C. Wong can be reached at justin.wong@thecrimson.com.