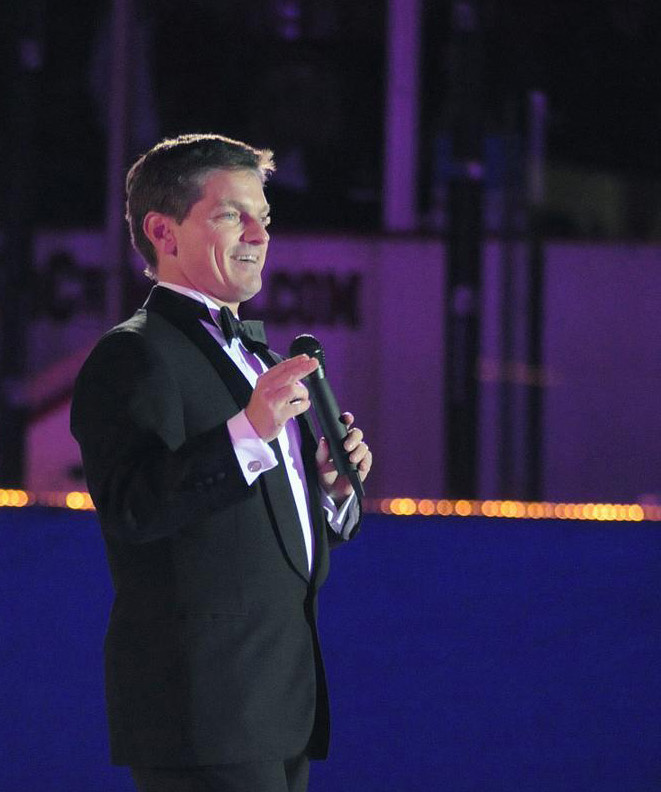 In the fall of 1989, Paul S. Wylie ’90-’91 was enrolled in a foreign policy class at the Harvard Kennedy School. On Wednesday, he received his take-home midterm on Eastern Europe. On Thursday, the Berlin Wall came down. And the next week he was figure skating in a competition in West Germany. Such was the life of an Olympic-level skater enrolled at Harvard.

Wylie began his skating career at the early age of three in Dallas, Texas, following in the footsteps of his two older sisters. During his sophomore year of high school, he visited Harvard, performing in An Evening With Champions, a charity skating event hosted by Eliot House.

By Courtesy of Paul Wylie

“I was dazzled by what I saw and really already began to long to come to Harvard,” Wylie said.

While he considered attending the University, some counseled him to postpone school and focus on his skating.

“In fact, Brian Boitano at one point said, ‘You know you just have to give up this school thing, this is ridiculous. You just have to focus and go back to school later,’” said Wylie, quoting another Olympic skater.

Wylie took two years off to train but did not lose sight of his dream to attend Harvard, eventually finding his way to the University with the hope of balancing his athletic career with his academic ambitions.

“Sometimes I did it well, and sometimes I did it very poorly,” said Wylie. Being an active student could take a toll on his skating career; in 1991, he stayed in the States for an exam and ended up having to skate jet-lagged at the World Figure Skating Championships in Munich.

“I wound up really having a disastrous, almost a career-ending performance,” Wylie said.

But Wylie looks back positively on his experience at Harvard. “For me, the combination of the two activities was quite powerful,” Wylie said. “[Academics] almost enabled me to put at arm’s length some of the pressures and stresses of my skating.”

A year after graduating, Wylie won a silver medal in the mens’ singles event at the 1992 Olympics in what was considered a major upset.

“It was really exciting and wonderful to have the experience of returning with a surprising silver medal, because I wasn’t supposed to do that well,” said Wylie.

Eliot House lit up the cupola in honor of his return from the win, a rare event at the time. “It was a really neat feeling to sense that celebration there,” Wylie added.

“My reaction was not only utter joy for him,” said Wylie’s Eliot House roommate Rob L. Soni ’90. “I had known how hard he worked...but I also distinctly remember thinking that he kind of got robbed, that he should have won the gold.”

“For six years I went in for it, and I spent all the energy I could on competition and tours,” Wylie said. “At some point I really wanted off. I wanted to go to school, and pursue the next thing.”

Wylie returned to Harvard to focus entirely on academics at the Harvard Business School and took a corporate job at Disney following his graduation in 2000.

Today, Wylie has finally achieved a careful balance between his interests on and off the ice. Wylie currently lives in North Carolina with his wife and three children, coaches skaters, and works as a health and wellness trainer.

Wylie has maintained a relationship with Harvard through An Evening With Champions, a non-profit student-run committee that hosts an annual figure skating exhibition to raise money for cancer research, participating both as a performer and a host. He has fond memories of the show directly following his Olympic win. That night, he said, he celebrated not only with friends from Harvard, but also other professional figure skaters that performed in the show.

“It was as if two of my worlds with all of my best friends collided,” Wylie said. “It was just a really fun memory.”

According to Wylie, he also serves as an advocate for up and coming young skaters who are considering Harvard. He tries to write letters for skaters he thinks belong at the school, citing the discipline and ability to “get the work done when the chips are down” that skaters possess.

While the lifestyle of an Olympic-level athlete at an Ivy League University can be difficult at times, Wylie said he is confident in the ability of this generation to follow in his footsteps.

“They come ready,” he said.

—Staff writer Ben G. Cort can be reached at ben.cort@thecrimson.com.

—Staff writer R. Blake Paterson can be reached at rpaterson@college.harvard.edu.