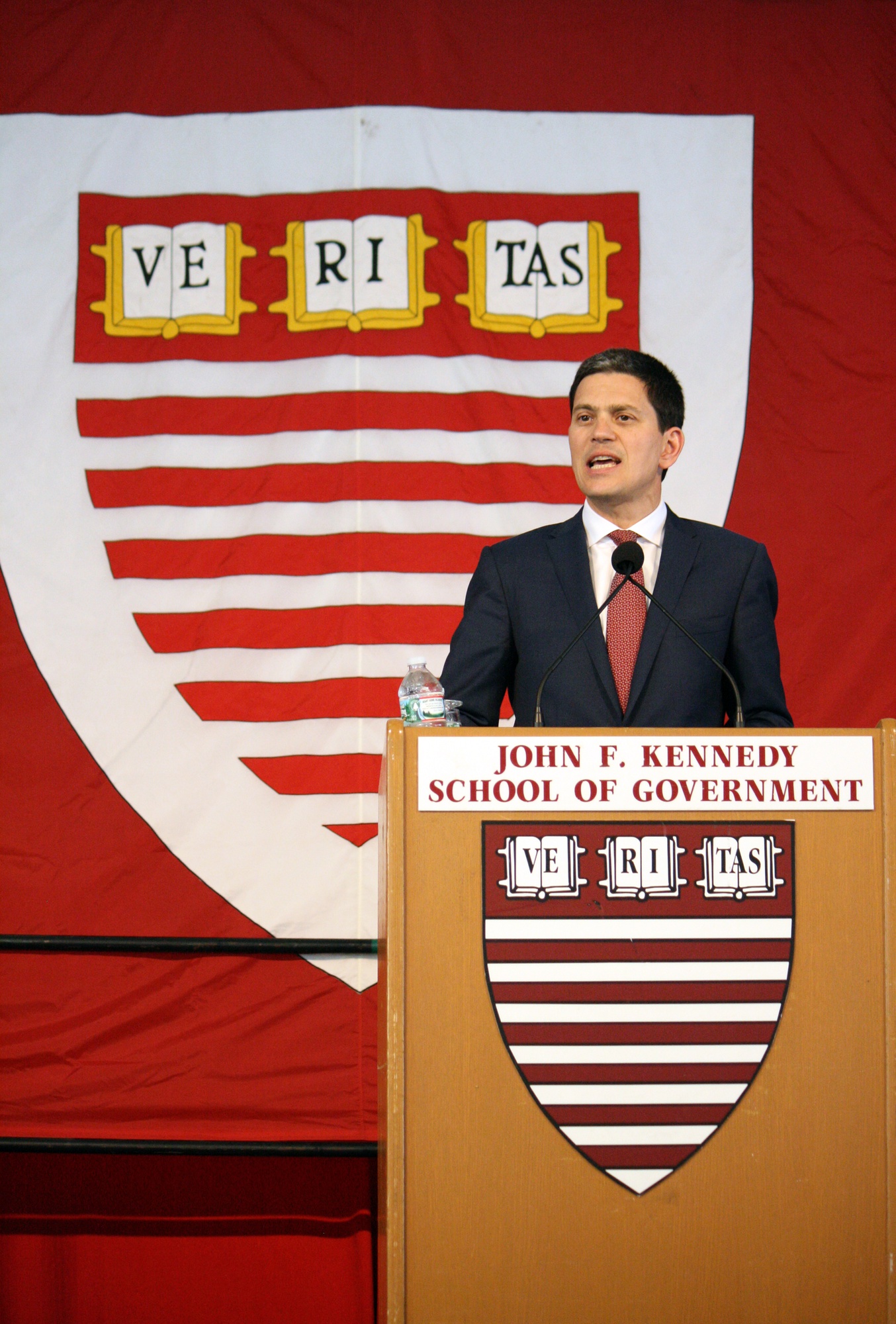 David Miliband describes his experience in Parliament and his current position as president and CEO of the International Rescue Committee in the Kennedy School of Government’s Commencement address on Wednesday afternoon.
By Luca F. Schroeder, Crimson Staff Writer

International Rescue Committee President and CEO David Miliband called on the 670 students set to graduate from the Kennedy School of Government to help instill a new innovative spirit into foreign policy and humanitarian affairs worldwide in the school's commencement address Wednesday.

“Government can be a great force for good, but it requires a cast of mind that I would describe as entrepreneurial,” said Miliband, who served as U.K. Foreign Secretary from 2007 to 2010 and as a Member of Parliament for South Shields from 2001 to 2013. “That is the role of politics, to add entrepreneurship to necessary bureaucracy.” 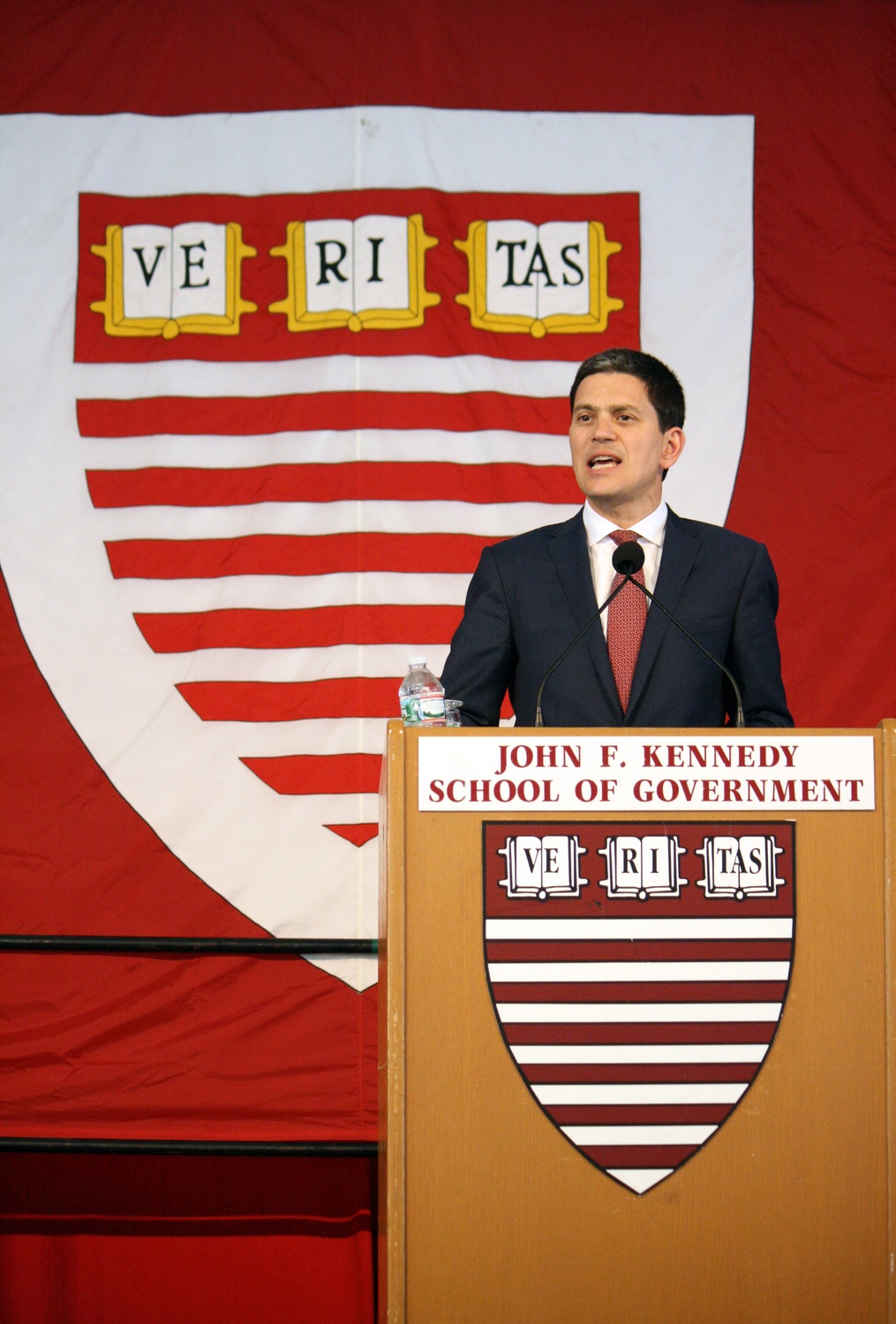 David Miliband describes his experience in Parliament and his current position as president and CEO of the International Rescue Committee in the Kennedy School of Government’s Commencement address on Wednesday afternoon. By Michelle M. Ng

Miliband said that discussions around foreign policy and humanitarian affairs are lacking in vigor compared to conversations surrounding domestic policy, despite the fact that globalization has in many ways united the aims of domestic and foreign policy in the creation of a “global village.”

“It’s really extraordinary that the world’s population has never been healthier, wealthier, better educated, better connected, but at the same time the number of people displaced by conflicts and disaster has never been higher,” Miliband said during a ceremony in JFK Park. “States prey to chaotic violence, and an international system that is weaker and more divided...demand our attention.”

Miliband pointed to the ongoing withdrawal of major world powers, in particular the United States and the United Kingdom, from the world stage as a reason for this “vacuum in the global commons,” pointing to the refugee crisis in Syria—which he characterized as “declining into a version of hell”—as an example of the failings of modern foreign policy.

“While some things are complicated, and you can understand why they’re not being done, others are relatively simple and when they’re not done it’s closer to a crime than a tragedy,” Miliband said, highlighting Western reluctance in admitting vulnerable Syrian refugees as an example of global inaction. “Over the last four years we have proved the risk of not doing too much but of doing too little—we’ve shown in the terrible unfolding that not to take action is an action of consequence every bit as grave as intervention itself.”

Miliband proposed two practical political solutions to begin to address this problem, endorsing French Foreign Minister Laurent Fabius’s proposal for the creation of a new code of conduct at the UN Security Council in which countries would voluntarily suspend their veto powers in cases concerning genocide and ethnic cleansing and calling for a renewed interest and commitment to UN peacekeeping.

Concluding his address, Miliband reflected on the humanitarian work of Varian M. Fry ’30, who helped rescue more than 2,000 refugees from Nazis as an agent of the International Rescue Committee’s predecessor, urging students never to lose their drive to public service.

“There is a view abroad that your generation is an apathetic generation…that’s not what I see,” Miliband said. “It’s easy to get lost in the detail and forget that what inspired you to join a school of government in the first place was a passionate desire to see a problem alleviated and the world improved, and my message to you is never forget that, never lose that sense of passion.”