A Push for a Program

After decades of administrative shutdown, the College is set to launch its first formal program in Latino Studies, but many are calling for something more

As an undergraduate, Herbert B. Castillo ’14 could not work toward a degree in his field of choice—not because of a lack prerequisite skills, faculty support, or motivation but because Harvard College did not offer the appropriate concentration.

Castillo describes “a lot of pushback” when he, and other students like him, tried to influence administrators to create a program specifically for Latino studies.

“A lot of times we were frustrated at the fact that we weren’t being heard,” Castillo said.

But after years of faculty and student frustration, the College next fall will debut a Latino studies secondary field within the Standing Committee on Ethnicity, Migration, Rights and a track within the Romance Languages and Literatures Department, according to Dean of Undergraduate Education Jay M. Harris.

The formation of these programs follows decades of administrative shutdown of repeated calls for Latino studies. Throughout that time, and despite news of the expansions within RLL and EMR, professors have rebuffed administrative decisions, choosing instead to pursue Latino studies not under a formal program. Students, meanwhile, have gathered for town hall discussions about advocating for a program at Harvard.

In separate realms across campus, yet all with one voice in favor of Latino studies, professors and students have chartered their own paths for this field and are hoping still for increased recognition and support. Their unified and persistent efforts have successfully revitalized the dialogue on campus and prompted administrative steps in cementing the place of Latino studies at Harvard.

Across University divisions, students and their professors for a long time have fought to make Latino studies a viable option within Harvard’s curriculum. While administrators have approved some programs, the stop-and-start nature of student and faculty efforts and the mixed results they have garnered over time have resulted in disparate programs.

“This is really an issue that’s gone on for so long...because...it doesn’t live in one place and because of those piecemeal efforts,” said Jeannette Soriano Gonzalez ’01, who served as co-chair of Concilio Latino, the University-wide umbrella organization for coordination and communication about Latino and Latin American groups on campus.

"In this particular area, Harvard is not a leader," said David Carrasco, a professor for the study of Latin America at Harvard Divinity School.

David Carrasco, professor for the study of Latin America at Harvard Divinity School who came to Harvard in 2001, said he has wanted Latino studies to become a “profound” area of study here since his employment began.

Carrasco said he has felt continually disheartened by what he calls a glaring absence in curricular offerings.

“Several times we’ve been on the verge of something...but the administration has pulled back,” Carrasco said. “In this particular area, Harvard is not a leader.”

In the early 2000s, Soriano said she helped organize town hall meetings in conjunction with professors Doris Sommer and Marcelo Suarez-Orozco, now at the University of California, Los Angeles, to discuss their hopes for Latino studies at Harvard. Attended by more than 70 students, the meetings were productive in creating a unified student-faculty voice but lost momentum because of administrative shutdowns, she said.

In 2002, for example, some prominent faculty members wrote a proposal for the creation of a Center for Latino Studies at the University and sent it to then-University President Lawrence H. Summers.

Despite administrative turndowns, students and professors continued to raise their concerns.

“There’s always been this desire [for Latino studies],” Soriano said. “You hit up against bureaucratic realities. They saw that [Summers] was not basically for this plan. Those [are] kind of hurdles, unless there’s a concerted effort on the part of the University.”

Still, professors and students have continued to agree that Latino studies should represent an important part of Harvard’s course offerings. 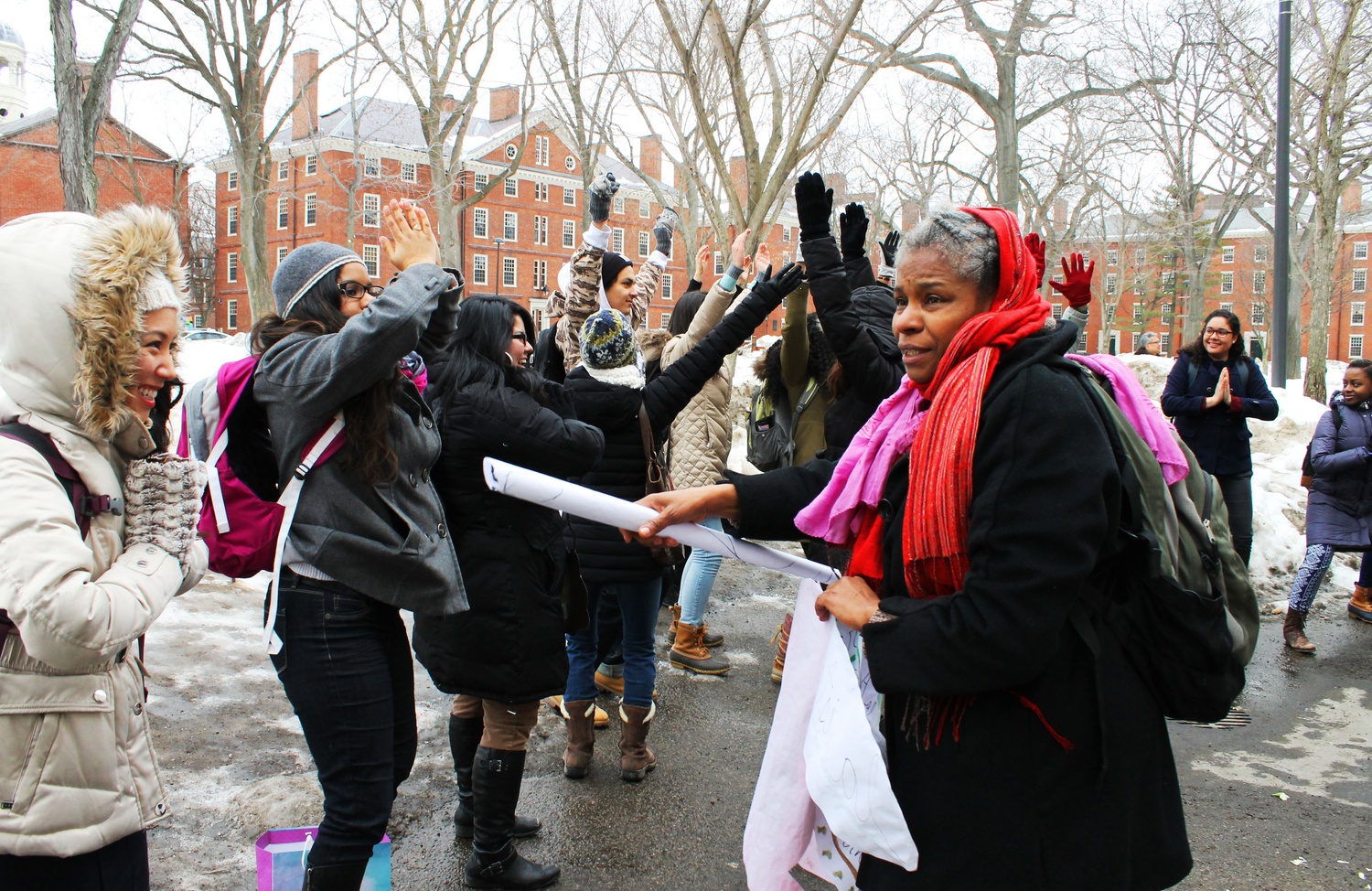 Josefina Báez, a performance artist, instructs students of Spanish 126: “Performing Latinidad” in a spontaneous expressive performance in front of the John Harvard statue in March. By Jennifer Y Yao
Advertisement

Across Harvard, renewed calls for Latino studies program have in part been answered by the two new programs, some students and professors said. But some professors have pointed to their own courses individually as academic changes already in the works, long before the news of the EMR secondary field in Latino studies and the track in the Department of Romance Languages and Literature.

Responding to what they say is a lack of programming in Latino studies, professors over the past few years have taken the matter into their own hands, contributing to a growing number of courses in the field.

“[I]n recent years, there have been a lot of faculty...committed to provide students with courses [in which] they can explore issues regarding Latinos,” said Maria L. Parra-Velasco, senior preceptor in Romance Languages and Literatures. “We’re not that many, but certainly there are important efforts on campus.”

Through their persistent efforts, professors and their students have formed an alliance and supported courses that foster topics that they deem important to study.

“I think that we do see a vibrant interest in Latino studies now, both among students and faculty,” EMR Program Administrator Tessa L. Desmond said. “There are a number of faculty who are [creating] a foundation, all actively working to develop a curriculum in Latino studies.”

The secondary field and Romance Languages and Literatures concentration track represent a more formal approach to Latino studies at the College.

At this point, the EMR Committee, home of the new Latino studies secondary field, plans to support professors as they continue to hone their specific courses, Desmond said.

At the same time, however, some professors say that a larger, more centralized approach to Latino studies, perhaps through a department or concentration, would benefit the field, drawing comparisons to the revitalization of African-American studies at Harvard through the establishment of a distinct committee in that field.

The new programs leave much to be desired, according to some professors, who not only want to continue refining their courses independently but to promote the importance of Latino studies on their own terms.

“[W]e also want to offer a concentration in Latino studies,” Parra-Velasco said. “And I’m sure that the Divinity School might have other possibilities. So now, you see things growing in different places, and I think that now the thing is going to be how we can start consolidating those possibilities.”

"Both initiatives show the potential Harvard has, through the profs and students making these moves, to be the intellectual leader in this crucial area," said David Carrasco, a professor for the study of Latin America at Harvard Divinity School.

Carrasco, for his part, wrote in an email that although the secondary field and Romance Languages and Literatures track options indicate a step in the right direction, he sees these developments as part of an “unfinished product.”

“By this I mean both initiatives show the potential Harvard has, through the profs and students making these moves, to be the intellectual leader in this crucial area,” Carrasco wrote, adding that a “[s]econdary field is good. A Center or department or 'primary field' is much better and overdue.”

Yet the EMR Committee does not count as one of its goals pushing administrators to expand the secondary field to become a concentration or a department, according to Desmond. Instead, Committee members hope “to build a solid program with what we have,” she said.

“Our goal is to work with the faculty who are working in these areas...to identify curricular gaps...given the resources we’re allocated...build the strongest program we can given the University’s framework,” Desmond added.

Dean of the Arts and Humanities Diana Sorensen also said she does not see the next step for Latino studies as turning the secondary field or the concentration track into its own department, citing the importance of interdisciplinary learning that a departmental structure would stifle.

“I feel that creating new departments only isolates people," Sorensen said.“I think the key thing is to have the field be present in a lot of departments.”