With its tendency to approve legislation, the Undergraduate Council may be straying away from taking more meaningful stances on campus issues 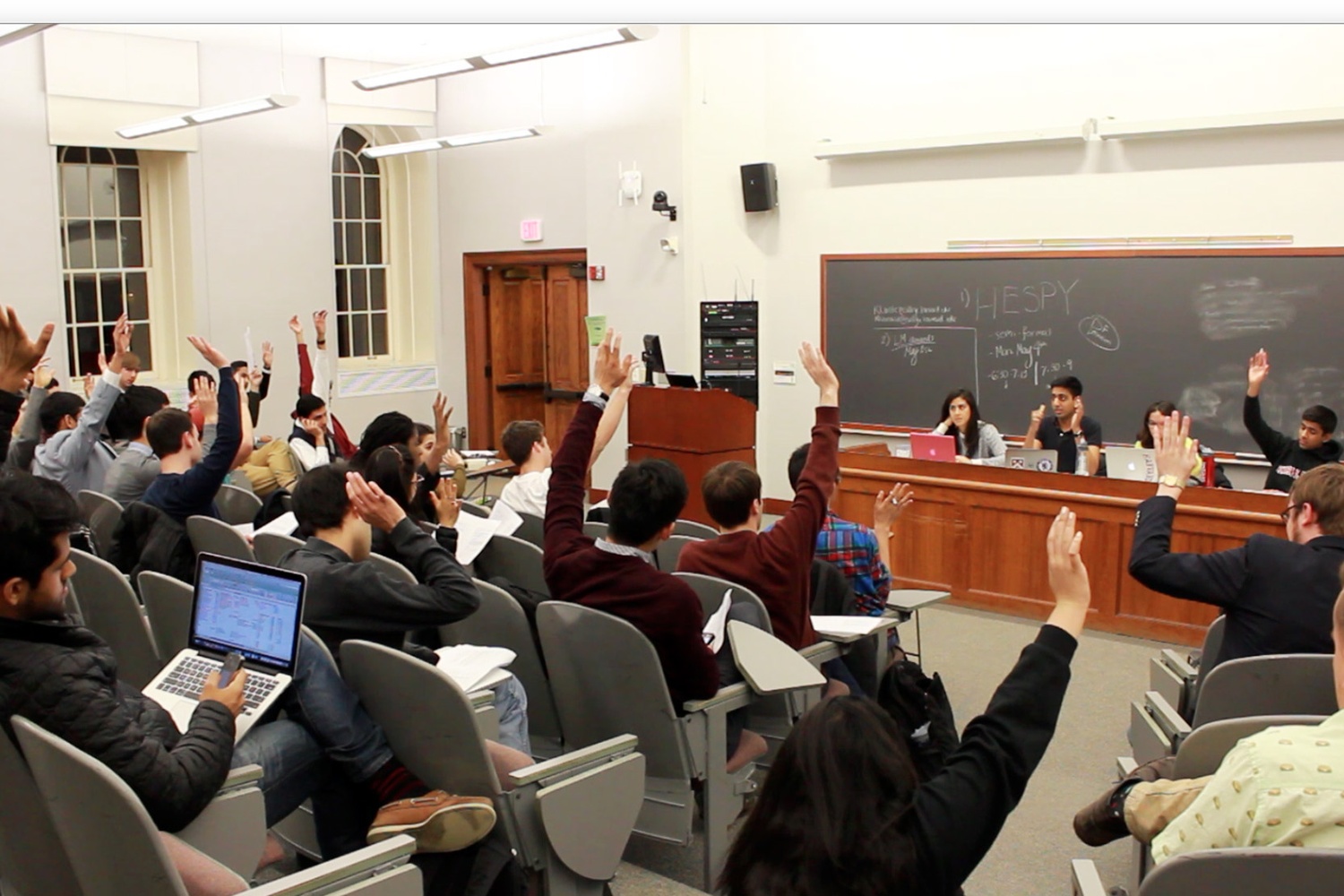 The Undergraduate Council considered an act sharply condemning Harvard’s all-male final clubs at a contentious meeting in March. The legislation and its attached position paper came amidst a wave of controversy on campus regarding the clubs after the Spee Club sent out a controversial party invitation to students including what some viewed as sexist depictions of women.

After embarking on an hour of debate, the Council ultimately voted down the measure, leaving the UC without a position on a topical campus issue.

Such an action is not a typical one for Harvard’s student government: The meeting marked the first time since November that the Council voted down a piece of legislation. During the past academic year, only three out of 57 Council acts on which representatives took a vote were not approved; many of them passed unanimously.

Some representatives defend the sheer number of up-votes, arguing that it is a byproduct of the Council’s reliance in committees to vet legislation before it comes before the entire body. But others point out that the bulk of the legislation that the Council considers—grant funding for student groups, statements of solidarity—is not controversial and actionable, making it easy for representatives to simply say “aye.” These representatives raise concerns that this trend suggests that the Council is not allocating its attention appropriately. Instead, these representatives argue, the UC is opting to shy away from taking bolder stances on controversial issues with relevance to student life, turning its focus to smaller internal initiatives and student group funding.

GETTING TO A YES

The Council holds in its coffers nearly half a million dollars to spend every year, the vast majority of which is allocated to student groups seeking funding for their activities. Though widely considered both inside and outside the Council the most important mandate of the UC, this appropriation of funds is not debated by the entire Council in detail at its general meetings. The specifics are usually hashed out weekly by its Finance Committee, the group of representatives responsible for funding.

The UC carries much of its work out this way. The Council has four other primary committees like its Finance Committee, all meeting weekly to meticulously discuss the legislation and initiatives that fall under their purview.

This system of considering legislation in committees first is intentional; according to UC President Ava Nasrollahzadeh ’16, the Council prefers that legislation go through committees to make sure it is “tightened up” before reaching the floor.

Once there, legislation is usually passed by unanimous consent, which former UC Vice President Sietse K. Goffard ’15 said is indicative of the Council’s faith in its committee structure. “We trust them to make a good decision; unanimous voting is a symbol of that trust,” said Goffard, adding that representatives are “skeptical” when pieces of legislation are not vetted by committees.

But although it contributes, representatives say that the UC’s committee system cannot alone explain the body’s lack of expressed dissent. Some forms of the legislation that are brought before the UC consist of material which Biebelberg called “by its nature, uncontroversial.”

“Just by virtue of the things that we do, there’s not always room or need for excessive debate,” he said.

Popp’s legislation asked the UC to allow environmental activist group Divest Harvard to publicize “Heat Week,” its April protest of Harvard’s investment in fossil fuel companies that involved a weeklong blockade of Massachusetts Hall, over the Council’s email list that reaches all undergraduates. The Council voted down the measure, with several representatives arguing that they were reluctant to give what they saw as “implicit” support of Heat Week and the divestment movement.

The Council’s hesitance contrasts with the strong support the UC offered in fall 2012, when the Council passed legislation sponsored by now-UC Vice President Dhruv P. Goyal ’16 that the Council would “partner with...Divest Harvard to actively pursue its goals.” Three years later, Goyal voted against Popp’s legislation.

Earlier this semester, the UC similarly hesitated to support the act authored by Winthrop House representative and Crimson news writer Daniel R. Levine ’17 that condemned final clubs. The position paper that accompanied the act said many undergraduates view the clubs as “a thinly-veiled mechanism for elite, male students to exploit power dynamics and get laid.” Representatives scorned the act for its harsh language and voted it down.

ABSTAINING FROM A STANCE

That vote was a departure for the UC. Cabot House representative Luke R. Heine ’17, who voted against the measure, said controversial legislation that takes a strong stance like the final clubs act is rare for the Council.

“That was a great example of what the UC could be in its best times,” said Heine, calling the act “bold” and “courageous.”

"I would love to have the UC more actively using their...powers to reach parts of the student body," said Cabot House representative Luke R. Heine '17.

Even on other concerns raised by the student body, such as the administration’s decision to shift the purview of the Bureau of Study Counsel from Harvard University Health Services to the College, the Council has failed to take a concrete stand. Instead of expressing disapproval or approval of the College’s decision, the UC merely asked administrators to provide documents that would explain how they came to their decision.

Some representatives, such as Heine, say that the Council should be looking to discuss more controversial topics and take stronger stances on issues. Popp said that beyond the weekly student group grants approved by the Council, legislation is mainly immaterial.

“I would love to have the UC more actively using their…powers to reach parts of the student body,” he said.

Still, other representatives contend that voting in support of smaller pieces of legislation and not taking strong stances on controversial issues is simply the nature of a student government.

“The UC tends to want to accommodate people’s perspectives, so we tend to up-vote a lot of things,” Council Parliamentarian Jacob R. Steinberg-Otter ’16 said. “I think people want a lot of things from a student government, so they expect it to be a forum where a lot of profound things happen.”

Biebelberg said despite this possible expectation from the student body, the Council does not have to change what it votes on and considers.

“We should not take ourselves more seriously than people think we should,” Biebelberg said.