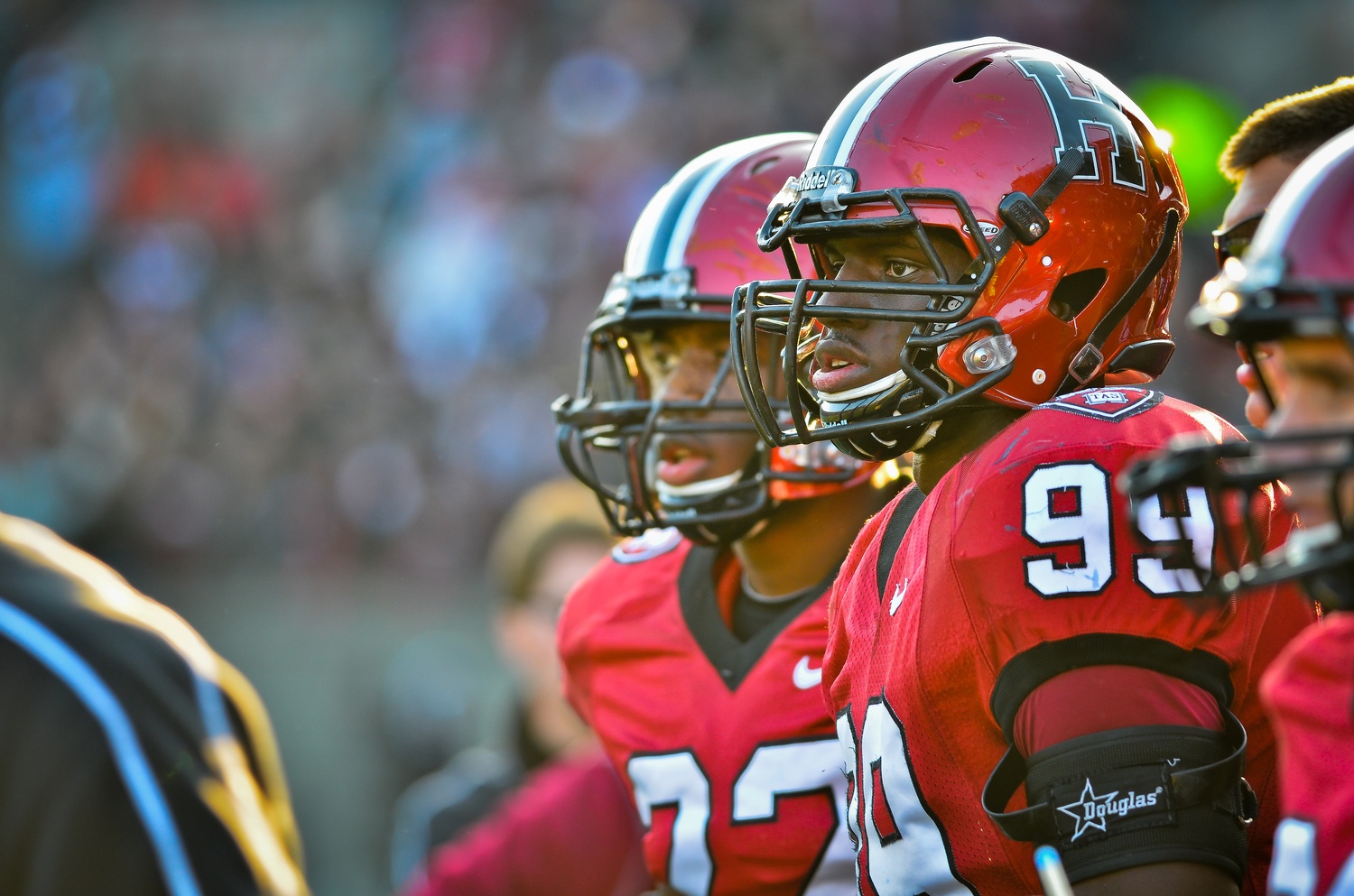 Crimson defensive end Zack Hodges signed with the Indianapolis Colts after he did not hear his name called at the NFL Draft on Saturday. By Shunella Grace Lumas
By Sam Danello, Crimson Staff Writer

Over a decade after battling homelessness on the streets of Charlotte, N.C., and six years after the sudden death of his mother left him parentless, Harvard defensive end Zack Hodges ascended to the highest levels of football this Saturday, negotiating a free-agent contract with the Indianapolis Colts.

Although some analysts had projected Hodges as a seventh-round pick, the senior waited through Draft Day without hearing his name. Then, on Saturday evening, Hodges received a call from the Colts and promptly agreed to terms.

“I think he’ll make it in the NFL,” said Harvard coach Tim Murphy prior to the draft. “I also try to counter that with the understanding of how hard it is to be the best at something you’re doing at such a young age.”

In Indianapolis, Hodges will join Yale senior running back Tyler Varga, whom the Colts also signed as an undrafted rookie.

Elsewhere in the NFL, the Baltimore Ravens nabbed Crimson offensive lineman Nick Easton on Saturday as well. Easton was named to the Associated Press FCS All-America third team for his senior season performance.

But not every professional signee compiled a resume as impressive as Hodges did over his four years. The defensive lineman finished with 27 sacks on his career, the highest total of any Crimson football player.

For his efforts, Hodges was twice named Defensive Player of the Year in the Ivy League. No other Ancient Eight athlete had ever accomplished this feat.

In 2014, he also earned a share of the George “Bulger” Lowe Award, which recognizes the best player in New England.

Even so, Hodges’s 6’2”, 250-pound frame would make him a seriously undersized defensive lineman, and Hodges will likely transition to a linebacker role with the Colts.

“He has the skill set,” Murphy said. “I really believe he’ll make a quality NFL outside linebacker.”

Hodges received national attention over the past few weeks as news sources from the New York Times to Bleacher Report ran features on his journey from homeless teenager to Crimson star to NFL prospect.

The articles relayed the bootstrap narrative of a young man who overcame a trio of tragedies: the deaths of his father, grandfather, and mother.

After brain cancer claimed his father when Hodges was only one, Hodges’ mother Barbara trained her attention on raising her only son.

She brought him to museums and classical concerts; she moved with him from North to South; and, when she lost her job, she slept in a car with Hodges during long homeless nights.

Although Barbara found a job, Hodges’ luck didn’t turn. One morning, in his junior year of high school, Hodges was preparing for school when his mother collapsed. An ambulance sped her to the hospital, but she was pronounced brain-dead within the hour.

Still, Hodges persevered, transferring high schools two more times before entering Harvard as a freshman—and entering the football program that he would shape over the next four years.

“He’s got great resiliency skills,” Murphy said. “The only variable is time.”