Track and Field Athletes Reach for Athletic Glory Beyond Harvard

For some Crimson runners and throwers, the ceiling goes beyond the collegiate level 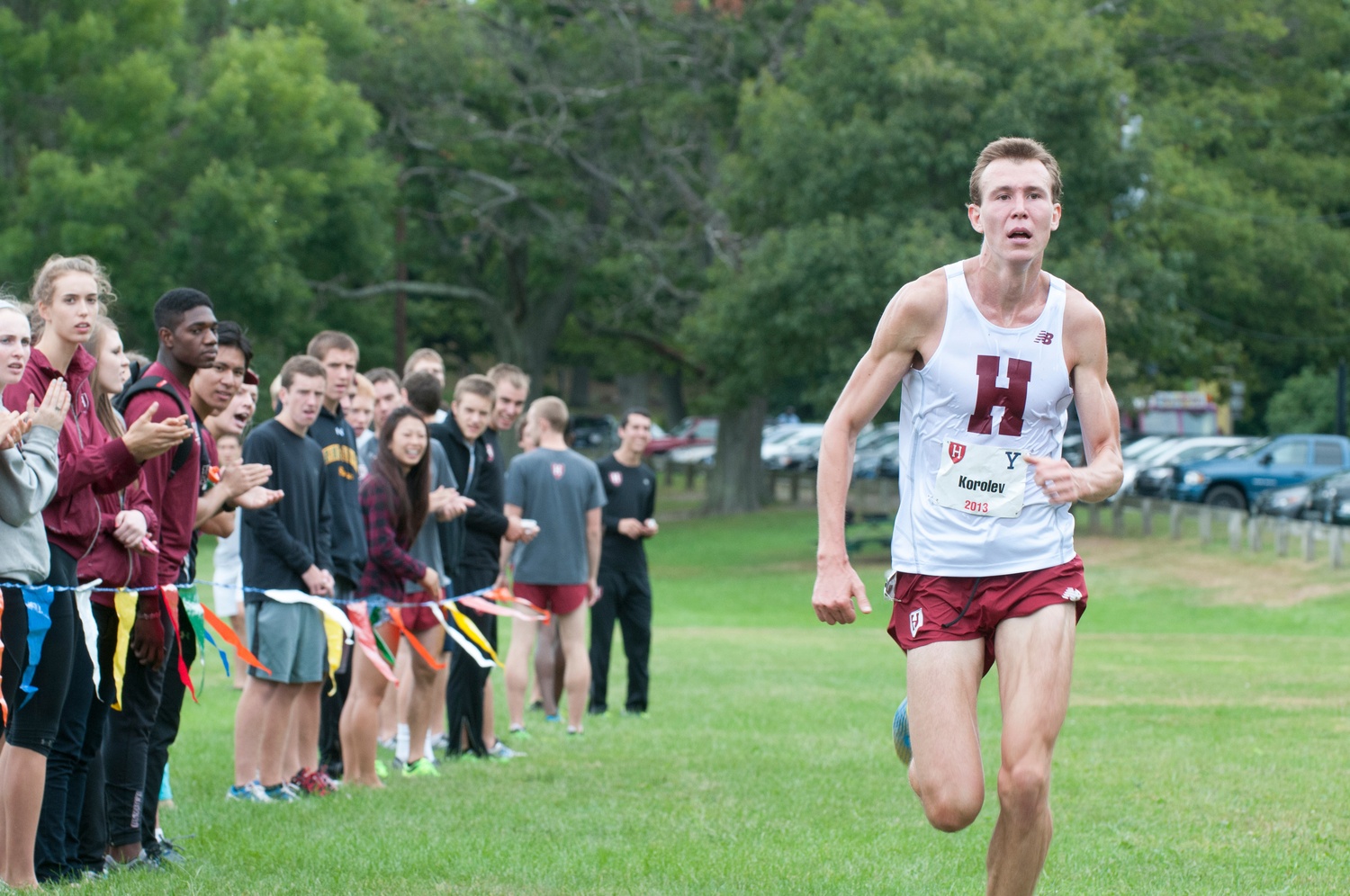 For three Harvard track and field athletes—one recent graduate and two current undergraduates—athletic glory does not stop at the Ivy League or even NCAA level. These three competitors, who are no strangers to competing for the Crimson, now have their sights set on gold.

At the 2012 Olympics, Samyr Laine ’06 paved the path, making waves when he not only qualified in the triple jump for Haiti but also finished in 11th place in the competition’s final round. Laine is one of just 20 Harvard track and field athletes to compete in any Olympics since the first modern Games in 1896.

Now, three Harvard athletes are using both international and collegiate competition to prepare for a run at Olympic qualification and an opportunity to become the next Crimson athletes to etch their names in Olympic history.

OFF TO A FAST START

Jade Miller, despite being only a sophomore for the Crimson, brings a laundry list of success in international competition after competing for the U.S. track and field team.

While still in high school, Miller—who is both a sprinter and hurdler—competed at both the Pan-Am Junior Games and U.S. Junior Nationals in the 400 meter hurdles. At U.S. Junior Nationals, the sophomore took second place with a time of 57.21, the ninth fastest time ever for a high school runner. She finished second to then-College freshman Autumne Franklin, who is now Miller’s teammate on the Crimson.

While the sprinter easily demonstrated that she belonged with the elite, she also described competing for her country as a surreal experience.

“It didn’t really hit me until I received a big box of team USA gear in the mail,” Miller said. “Until then, I would just tell people I was going to Colombia [for the Pan-Am Junior Games]. The backpack, warm-up, and uniform they sent made it concrete for me.”

Additionally, the Temecula, Calif., native found, somewhat unexpectedly, an extra sense of pride when competing for the U.S. team.

“It’s one thing to do the Pledge of Allegiance or put your hand over your heart during the national anthem,” Miller said. “But when you put the jersey on that says USA on the chest, it’s a whole different thing. It was something we could all get behind despite coming from different states, different backgrounds, and different schools.”

In Miller’s opinion, the experience she has gained while competing for the U.S. team has helped her become successful at the collegiate level.

“When I went to Worlds, I was freaked out—I was so scared,” Miller said. “But I think the experience has helped me stay grounded. [At Harvard], I tell myself, ‘Jade, this is a big meet, but you’ve competed in bigger meets. Calm down, and just run the lap.’ That helps me relax.”

For some Crimson athletes, competing internationally does not necessarily mean donning the American Stars and Stripes. While many Harvard athletes who compete at the international level end up representing the United States, there are others who compete for other countries as well.

Among those is Harvard thrower Nikki Okwelogu, who has had a breakout season for the Crimson this year in collegiate competition. Coming into the season, Okwelogu’s best throw in the shot put was 16.09 meters, good enough for a school record.

This year, the sophomore has shattered the Ivy League shot put record several times, most recently at the NCAA Indoor Championships in March, where she recorded a throw of 17.22 meters.

But even prior to her collegiate success, the national track and field team of Nigeria, a country in which Okwelogu holds dual citizenship, had been keeping the Fresno, Calif., native’s talent on its radar.

“My mom sort of just ran into a guy wearing a Nigerian track t-shirt at one of my track meets in high school,” Okwelogu said. “They were originally interested in my older sister, but I caught their attention and made the team later on during my senior year of high school.”

Despite being a member of her country’s team since her senior year of high school, Okwelogu’s first experience competing for Nigeria came this past summer at the Nigerian National Championships, where she won the title in the shot put.

“It was a bit of a culture shock for me,” the sophomore said. “I grew up around Nigerian people—my whole family is Nigerian—but going there and being immersed in the culture was totally different.”

Thanks to Okwelogu’s newfound international career, this past year was the first time that the sophomore had ever constantly trained year-round. Despite being a grueling process, her efforts have paid massive dividends for the Harvard team so far, as evidenced by her performances throughout the season.

While competing for Nigeria at competitions like the Commonwealth Games and the World Junior Championships in the same year has proved a fruitful experience for Okwelogu, the sophomore also described a difficulty in balancing Harvard athletics and international competition.

“It is difficult sometimes now to come back to Harvard and find the same adrenaline,” Okwelogu said. “I’ve been to those meets where your heart is beating out of your chest, and you can’t even breathe. It’s hard to replicate that same environment at Harvard.”

However, Okwelogu’s confidence is at an all-time high when returning to Ivy League contests.

The Olympics are surely in the back of Okwelogu’s mind as the thrower has said that one of her biggest goals now is to qualify for the summer games in 2016. The sophomore has even gotten a taste of Olympic competition already at the Commonwealth Games, where she ran into a well-known thrower—two-time gold medalist Valerie Adams of New Zealand.

“No one can even remember the last time Valerie Adams lost in competition,” Okwelogu said. “Just standing next to her, she was so tall and intimidating. It was different to walk into a stadium with 40,000 seats filled watching Valerie Adams and realizing that I had to throw too.”

While the challenge ahead of her might be daunting, the sophomore still has two years of collegiate play and an international career ahead of her.

Maksim Korolev ’14 began his Harvard career as a highly recruited distance runner out of Harrisonville, Mo., where he was a state champion in the 1600 and 3200 meter races and was named Gatorade Missouri Runner of the Year in his senior year.

In his sophomore year of college, following a freshman campaign that saw him place 100th at the NCAA Northeast Regional competition in the 10K, Korolev suffered an injury that prevented him from competing for the entirety of the running season.

Nonetheless, Korolev underwent a meteoric rise during his senior year, thanks in part to regimented trainings sessions with then-teammate James Leakos ’14, who holds Harvard’s second and third fastest times in the 5K and 10K, respectively.

Korolev claimed the NCAA regional title in the 10K and received All-American honors for his third-place finish, an all-time Harvard best, at the NCAA Cross Country Championships in Terra Haute, Ind.

“I trained hard through my junior season,” Korolev said. “In running, if you put in the work, it will eventually show. I had been working a lot in the three years before, and it finally kicked in.”

With one year of eligibility left because of his missed sophomore season, Korolev moved to Stanford University following his graduation from Harvard in 2014.

At Stanford, Korolev has broken onto the international stage by earning the sixth and final spot on the U.S. cross country team to compete at the World Championships. He qualified by running the 12K course in 37:03 in Boulder, Colo., at the 2015 U.S. Championships.

Additionally, Korolev won the inaugural Pan Am Cup, a championship race for athletes from North America, South America, and the Caribbean held in February in Barranquilla, Colombia. At the IAAF World Championships this March, held in Guiyang, China, Korolev finished 57th of 111 runners, and fifth of the six Americans running in the race.

For Korolev, though, the 38-minute race was only a small part of the experience that came with competing on the international stage.

“I’m not going to remember so much the race,” Korolev said. “What I will remember is the week leading up to the race, spending time with the U.S. guys, being in China, and being super sick of the Chinese food.”

If he can continue the success he has had over the past few years, however, Korolev might want to get used to foreign cuisine. While the ex-Crimson athlete is not 100 percent sure of his plans for the near future, Korolev definitely knows that running—and international competitions—are not going to go away anytime soon.

“I think the Olympics would be fun,” Korolev said. “As long as I’m still running, I’d like to make as many U.S. teams as possible. I’d like to stay as competitive as possible on the world stage and continue to improve.”

While there is little doubt that these three athletes have more than proved themselves at the collegiate level, the global stage presents a new series of challenges. But joining Laine on a long list of Harvard track and field athletes to compete in the Olympics is surely within reach.

While the future may still be uncertain, one thing is for sure: these talented individuals have their eyes on gold.