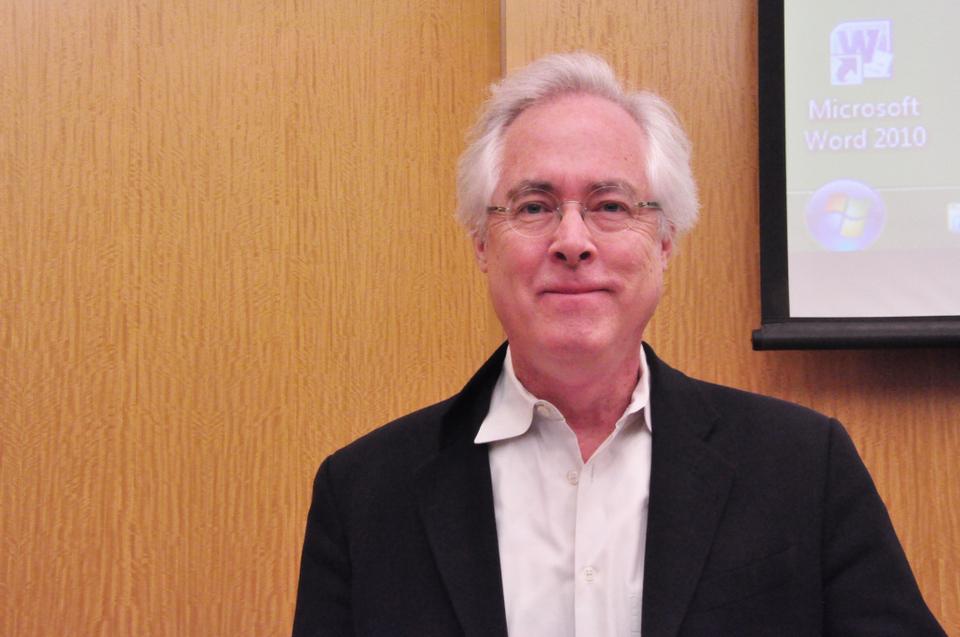 Anne T. and Robert M. Bass Professor of English Louis Menand will not travel far for his sabbatical next year. His office will move exactly 0.1 miles—a two-minute walk, according to Google Maps—from the Barker Center to Widener Library.
By Lena K. Felton

Anne T. and Robert M. Bass Professor of English Louis Menand will not travel far for his sabbatical next year. His office will move exactly 0.1 miles—a two-minute walk, according to Google Maps—from the Barker Center to Widener Library.

“I’m going to stay here, because the best library in the world is across the street,” Menand tells me. We’re sitting in his current office in the Barker Center; it’s gray outside. If Lamont weren’t in the way, I’d probably have a view of Widener from the window.

The sabbatical will afford Menand the time to finish a book about the Cold War period. The project’s been in the works for the past 10 years, ever since Menand taught a graduate course at Princeton about cultural events of the 1960s. In the class, he contrasted something particular to the ’60s, like Pop Art, to art in the ’50s. The comparison helped show students the “revolutionary and radical” aspects of the latter decade, Menand explains. At the end of the course, Menand posed a question to the students: He was considering writing a book about the ’60s, and would they be interested in it?

“They said no,” Menand confesses with a laugh. Instead, his students were interested in the “strangeness” of the ’50s, a world of art, music, and ideas that seemed particularly distant from our current mode of thinking.

At Harvard, Menand used to teach a General Education course called Societies of the World 23: “Art and Thought in the Cold War.” It’s no longer running; it got too big and “crazy.” When enrollment grew to 300 students, Menand had to hold lectures in the Science Center, which he didn’t like. But that class did allow Menand to explore a lot of the issues his book will consider further.

“It takes a while to get the airplane down the runway and into the air,” he says of putting the book together. “And once it’s in the air, it pretty much gets you to your destination. It took me a while to feel I knew enough and to get a feel for the kinds of things I wanted to write about, just to get comfortable with the subject.”

He’s written about a third of the book so far. For Menand, the researching, reading, and absorption of information are the most time-intensive aspects of the process. He doesn’t start writing until he’s done all the reading. “I like to let the material pickle in my brain for a little while,” he says, motioning to his head. “Then I just start writing and it comes out, because it’s been sort of organizing itself in my subconscious.”

Menand wears rimless, circular glasses, speaks quietly but with feeling, and has a full head of almost white hair. In addition to knowing how to teach, he certainly knows a thing or two about writing. He was a poetry major at Pomona College, enrolled in Harvard Law School afterwards, and hated it. He transferred to Columbia, where he received his Ph.D. from the English Department. He became a professor, and later, a journalist. His first gig in journalism was as an editor at the New Republic in 1986. He’s since become a staff writer for the New Yorker and a contributor for the New York Review of Books.

Menand hasn’t written poetry since college, so I ask if it was law school that killed his creativity. “I lost it,” he laughs. “Totally.” But this isn’t to say he’s not passionate about the writing he does now. “I don’t write creatively at all; I just write critical prose,” Menand says. “But it’s funny because it feels like writing creatively. That is to say, I feel very fulfilled by producing critical prose and putting myself into it. It’s still the same feeling I had when I was in college and writing poems.”

Menand doesn’t have a favorite magazine piece he’s written—they’re like children, he jokes—but he does have a favorite book of his published quartet. It’s the well-received “The Metaphysical Club,” and it’s the book Menand feels “God wanted me to write,” he says.

It’s hard to label Menand a writer or a professor: He’s really both. He’ll teach three days a week, and on the others he’ll prepare class materials, go to meetings, and work on his own projects. He responds that he “like[s] them both, honestly,” when I implore him to pick a favorite of the two. “They’re not totally different, but they’re fairly different. I think I’m more comfortable now in the academic world. I think I’ve gotten more intellectual and weird. Less magazine-y,” he says with a chuckle. This past year, Menand has particularly enjoyed teaching Humanities Colloquium 10.

Lecturing faculty members teach all of the sections for the foundational class, and students, mostly freshmen and sophomores, apply to get in. His favorite book to teach during the course is “Ulysses,” but “students don’t always like it,” he shrugs. “It’s hard for them; it’s a long book.”

Menand’s passion for interacting with students, and his love of literature and art and culture, is palpable. “I tend to think that the humanities are something that are relevant to everything else that you study, and that we should think about what we teach in that spirit,” he explains. “This is part of the world, and that part is the world of meanings. We figure out what things mean.”

While Menand says that he’ll miss teaching, breaking up his routine will be valuable, and he anticipates returning with fresh ideas in fall 2016. Plus, pining for campus is something Menand won’t have to worry about.

We end our conversation where we started it, talking about Widener. “I rarely see undergraduates in there—when I see them, they’re probably lost and trying to get out of the stacks,” he chuckles, opening his eyes wide. “Students should go in there. It’s just unbelievable what they have. I feel incredibly lucky, also with the Houghton [Library], to be able to sit there and have all this stuff. It’s like having 12 million books in my apartment.”

“Really,” he says, as I’m packing up to leave. “You’ve gotta use the library.”