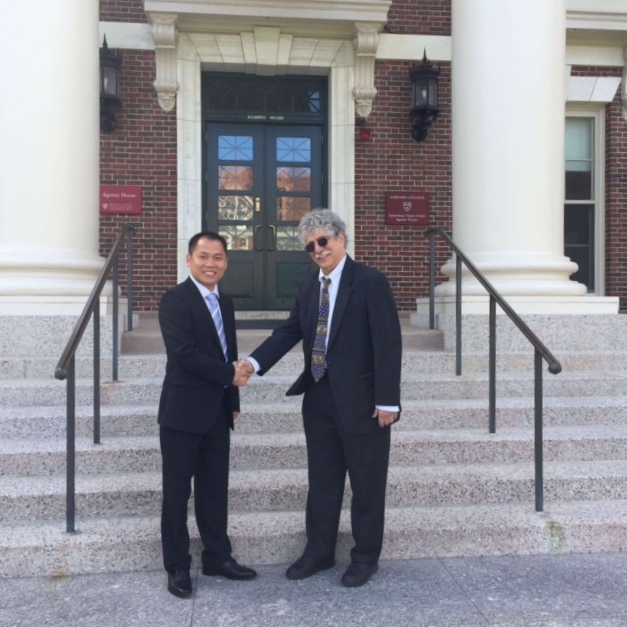 The China Lab at the Harvard Graduate School of Education has received a donation pledge of $100,000 to fund a research project focused on reducing academic stress in the Chinese school system, and the first installment of this promise is already “in hand,” according to those involved in the project.

The project, which will launch in July, is a collaboration between researchers at the Ed School, the University of Calgary, and the University of Jinan. The donor, Zhongping Yang, speaking through two translators, said that he felt compelled to fund this project because he hopes to help develop a more enjoyable and beneficial academic experience for both Chinese youth and students internationally.

Zhongping Yang, who donated $100,000 to fund research on reducing stress in the Chinese school system, shakes hands with Ed School Professor Robert L. Selman, the principal investigator on the project. By Courtesy of Yun Zhu

“I feel that, as a Chinese citizen, I have this responsibility and obligation to make a contribution to this important task, ” Yang said. “The question of academic stress is not only a Chinese problem, but it’s also a problem across the world.”

According to Xu Zhao, a postdoctoral scholar at the University of Calgary and a principal at the Ed School China Lab, the academic pressure placed on Chinese students is primarily the result of the rigorous university entrance exam, combined with broader social policies and increasing global competition. She said that the research team must take these considerations into account when determining approaches for intervention policies.

“As researchers, we want to advocate for the population we try to help,” Zhao said. “Through our research, we want to inform policy makers in their decision-making.”

Ed School visiting professor and director of the Ed School China Lab Helen E. Haste, the project’s other co-investigator, said that the team will conduct a series of questionnaires, interviews, and focus groups with different Chinese student populations in order to create useful, accurate narratives to guide their approach

The project’s principal investigator Robert L. Selman, who is also a Harvard Medical School and Ed School professor, wrote in an emailed statement that he views the initiative as a long-term endeavor that will evolve into a concrete program for prevention of academic stress. He emphasized that the recommendations will be tailored to fit the cultural context of Chinese society.

“...[The intervention methods] will not be ‘parachuted into China.’ They will, by necessity, be preventive interventions with strong ‘Chinese Characteristics,’ meaning cultural issues will be among the most important for us to consider with our Chinese partners,” he wrote.

According to Selman, this is the first Ed School project involving research in China that is funded by a source outside of Harvard.