Harvard is making efforts to diversify its faculty, but challenges remain 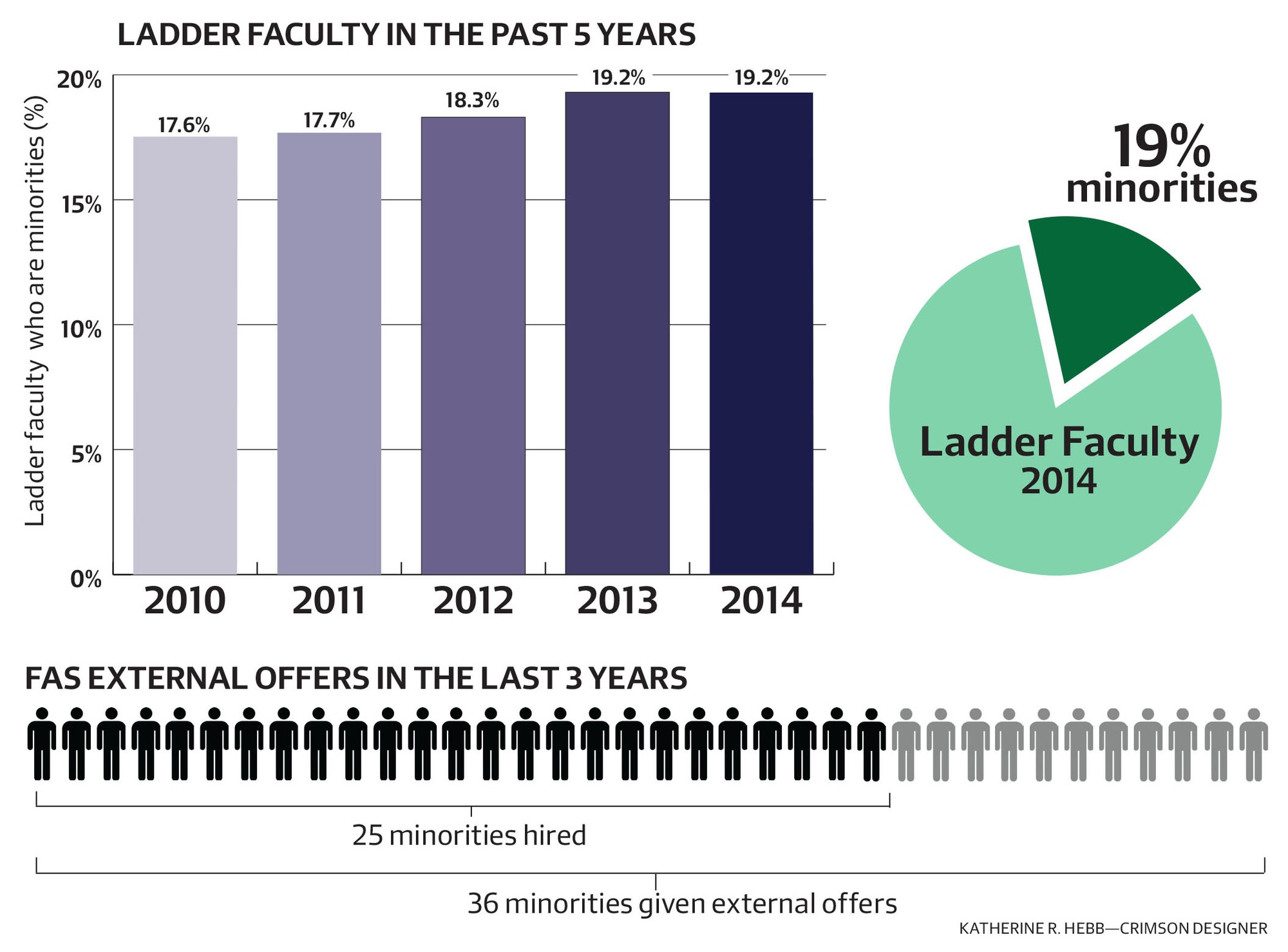 This is part II in a two-part series about diversity in the Faculty of Arts and Sciences. Part I ran on May 6.

Foldout seats in University Hall’s second-floor Faculty Room fill up as 4 p.m. draws nearer. All voting members of Harvard’s Faculty of Arts and Sciences are invited to the body’s monthly meetings here on Tuesdays, although the seats are all rarely filled. Today, a breezy May afternoon, a low hum fills the high-ceilinged room as professors from departments across FAS chat over tea and coffee, mingling with colleagues. A bell rings. The meeting will commence.

Faculty meetings have taken place in this room since 1896, when it received its current name after extensive renovation. For more than a century, it has been a space in which members of Harvard’s flagship faculty come together and vote on legislation dealing with its policies.

Occasionally, some Faculty members comment on the portraits hanging on the sea-foam colored walls of this room. The portraits mostly depict former University presidents and FAS deans, who historically, have primarily been white men. According to S. Allen Counter, a professor of neurology and the director of the Harvard Foundation for Intercultural and Race Relations, there are no portraits of racial minorities in that room. 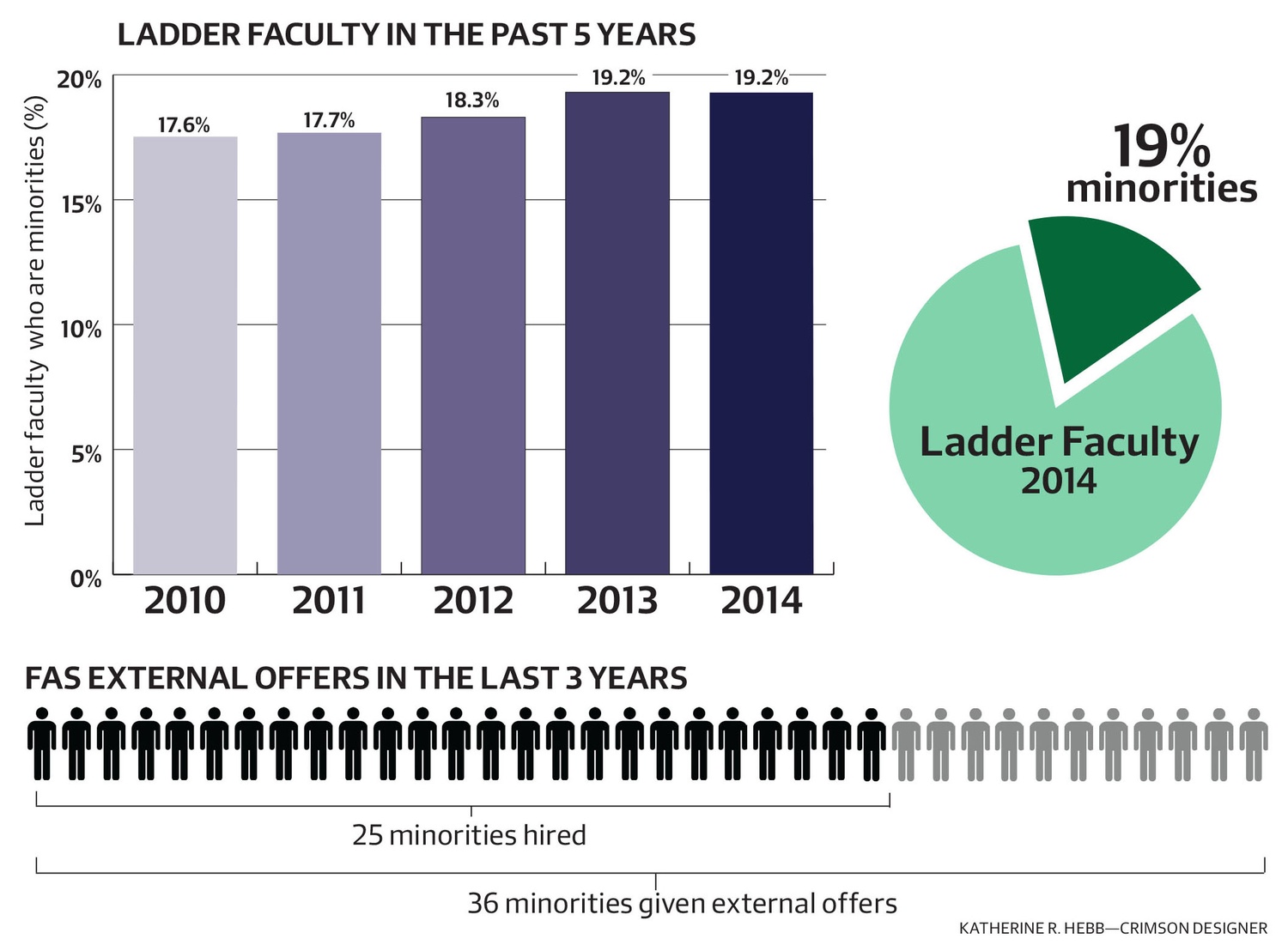 The Faculty of Arts and Sciences is making efforts to recruit more minority faculty members. By Katherine R. W. Hebb

Some Faculty members and administrators say this collection of portraits does not reflect the overall diversity of the Faculty today in 2015.

“Go into the faculty meeting room of the FAS and look at all the pictures and the busts,” says Judith D. Singer, Harvard’s senior vice provost for faculty development and diversity. “That’s the old Harvard. The new Harvard should be much more reflective of the pools of people [here].”

Indeed, over the past decade, FAS has seen a marked increase in the number of racial and ethnic minority faculty members and women within its ranks. Today, minorities represent about 19 percent of the Faculty, compared to 12 percent in the fall of 2000, according to the FAS Dean’s 2014 Annual Report. But while Harvard and FAS have institutionalized a hiring process designed to draw in more a racially and ethnically diverse faculty, some professors say that they feel there is more work to do to improve the work environment for those faculty after they enter Harvard’s gates.

Increasing faculty diversity will improve the quality of teaching and research at Harvard, faculty members argue—prompting administrators to increase efforts to hire a diverse set of faculty members in recent years.

Harvard tenured its first African-American faculty member, Martin Kilson, in 1969, and since then, FAS has slowly added more minority faculty members to its professoriate. In 1988, nearly two decades after Kilson’s appointment, FAS included 26 tenured minorities in a faculty of 383, just 7 percent.

In recent years, FAS Dean Michael D. Smith has prioritized increasing diversity in the faculty, he says. From 2011 to 2014, FAS extended 36 external offers to minority candidates and hired 25.

In particular, in an effort to increase diversity in the Faculty, departments and administrators have identified the search and hiring processes for tenure-track faculty as important intervention points.

“What has happened in the last 10 to 15 years is an increasing recognition that the search is the point of intervention,” says Singer, who has led the University-wide Office of Faculty Development and Diversity since 2008. “It’s really where things change.”

According to FAS Dean for Faculty Affairs and Planning Nina Zipser, her office and FAS’s divisional deans keep track of junior faculty candidate lists in an effort to ensure that they offer a diversity of perspectives. From time to time, these administrators ask search committees to reconsider a list if the candidates have become too homogeneous, Zipser says.

Beyond candidate lists, when considering the faculty search process, specialists often discuss the subject of implicit biases—the attitudes or stereotypes that cause people to value the achievements of those most like them and thus disadvantage minorities in the hiring process.

One of these specialists is Mahzarin R. Banaji, a Psychology professor who advises Smith on faculty diversity and development. Banaji, who studies implicit biases’ effects on decision-making, often consults with committees and departments as they conduct their searches, and she helped inform a guide that Singer’s office circulated on best search practices.

This awareness of implicit biases has played an active role in departmental hiring and governance at FAS, according to some professors. Johnson says that the leadership of Harvard’s Astronomy Department actively encourages minority faculty to voice their opinions and discuss diversity in the sciences; this atmosphere factored into his decision to leave the California Institute of Technology and come to Harvard as a junior faculty member, he said.

Indeed, Astronomy department chair Abraham “Avi” Loeb calls ensuring diversity among his faculty “a main guiding principle” in his leadership of the department. Johnson, Loeb, and other Astronomy professors are currently discussing the creation of a program within the department for African-American Ph.D. students, an institutional approach to improving the environment for minorities in the department.

Singer also points to the importance of addressing issues of diversity even before the hiring stage: How prospective faculty are drawn from graduate school pools, often called “the pipeline,” is “the first stage” to diversifying the faculty, she says.

Says associate professor of Music Sindhumathi Revuluri: “The more diverse our admissions are for grad students, eventually that means the more diverse pool of applicants for tenure track jobs.”

IN PURSUIT OF TENURE

When reflecting on their time on Harvard’s tenure track, some minority faculty members say that they or their minority faculty peers feel that they must work harder to prove themselves and their scholarship. Survey statistics tell a similar story: According to the University-wide 2013 faculty climate survey, a little more than 40 percent of underrepresented minority faculty reported feeling the need to work harder to “be perceived as a legitimate scholar.”

According to Michèle Lamont, a professor of Sociology and African and African American Studies, minority faculty members on the tenure track may in some instances feel that their work is undervalued, which could affect scholastic performance.

“When you’re isolated and the only person in your group, then it’s very easy to lose your self-confidence, and it affects, of course, your performance,” she says, emphasizing the small numbers of minority faculty members across FAS.

Two books that Revuluri says are well-known among minority faculty speak to this feeling: “The Black Academic's Guide to Winning to Tenure—Without Losing Your Soul”  and “Presumed Incompetent,” which includes essays written by women of color in academia.

Additionally, according to Sociology professor Mario L. Small, minority faculty members can often work in fields that he called outside the academic “mainstream,” and for professors who work on these topics, expectations about the tenure process are often less clear, generating even more anxiety, he said. (Small emphasized that work in these fields is by no means limited to minority faculty and that the majority of minority faculty do not work in such fields.)

Faculty members being reviewed for tenure are also in part judged on their University service, largely in the form of their mentorship and committee work. This can present another challenge for minority faculty members, for whom the pressure to serve in these capacities can be even greater than for their non-minority peers. And often, faculty members say, they feel that these extra contributions—though usually welcomed, on their part—go unnoticed.

Specifically, some minority professors report that administrators and department chairs ask them to contribute more “service” or committee work in an effort to diversify individual committees. There then is an implicit pressure to serve for tenure-track faculty members who worry that declining to serve on a committee could adversely affect their chances of receiving a tenure offer.

“I also get asked to be on lots of committees, not just within the department, but in general,” Revuluri says. “When I mention that to some of my more senior colleagues, especially white male colleagues, they seem surprised, because they've never been asked to be on all those committees, and that’s a little strange.”

Administrators and faculty suggest that increasing the diversity within FAS would help another constitute at Harvard—students.

Minority students, both undergraduate and graduate, disproportionately approach minority faculty members for advice, according to both faculty and administrators, presenting some faculty members with an extra commitment that they largely appreciate.

Timothy P. McCarthy ’93, a lecturer on History and Literature, says that he and his colleagues in the Department of African and African American Studies are often point people for students who feel there are few faculty on campus who can relate to them. Johnson, of the Astronomy Department, says he is the only African-American professor with whom some of his students interact.

“When there is a legitimate grievance among students here, whether or not they feel alienated themselves, whenever there is a racial incident or a homophobic incident on campus, the students come to us,” says McCarthy, who is gay.

Because there are so few minority faculty members at Harvard, McCarthy says, they can become designated as “the one” adviser to students or “the one” representative on committees. The result is a higher, and often informal, advising commitment.

Increasing the number of minority faculty members at Harvard would largely alleviate this higher commitment, some faculty say. Human and Evolutionary Biology assistant professor Katherine J. Hinde says that administrators should consider lessening some professors’ teaching loads if they have a larger mentoring responsibilities.

Beyond mentorship, Revuluri says it is important for students to see that minorities are established within academia, so that they too can feel empowered to enter academic careers.

“I do think it matters a lot for students to see a wide array of possibilities, and that includes gender and race and socioeconomic status,” Revuluri says. She says she does not remember having a professor of color within her own major while she was an undergraduate, leaving her to navigate the decision to go into academia mostly without any mentorship.

“You have to figure that kind of stuff out by yourself,” she says.

An earlier version of this article misstated Judith D. Singer's middle initial. It also incorrectly stated the year when Singer became Harvard's vice provost for faculty development and diversity. In fact, Singer took on the position in 2008, not 2005.