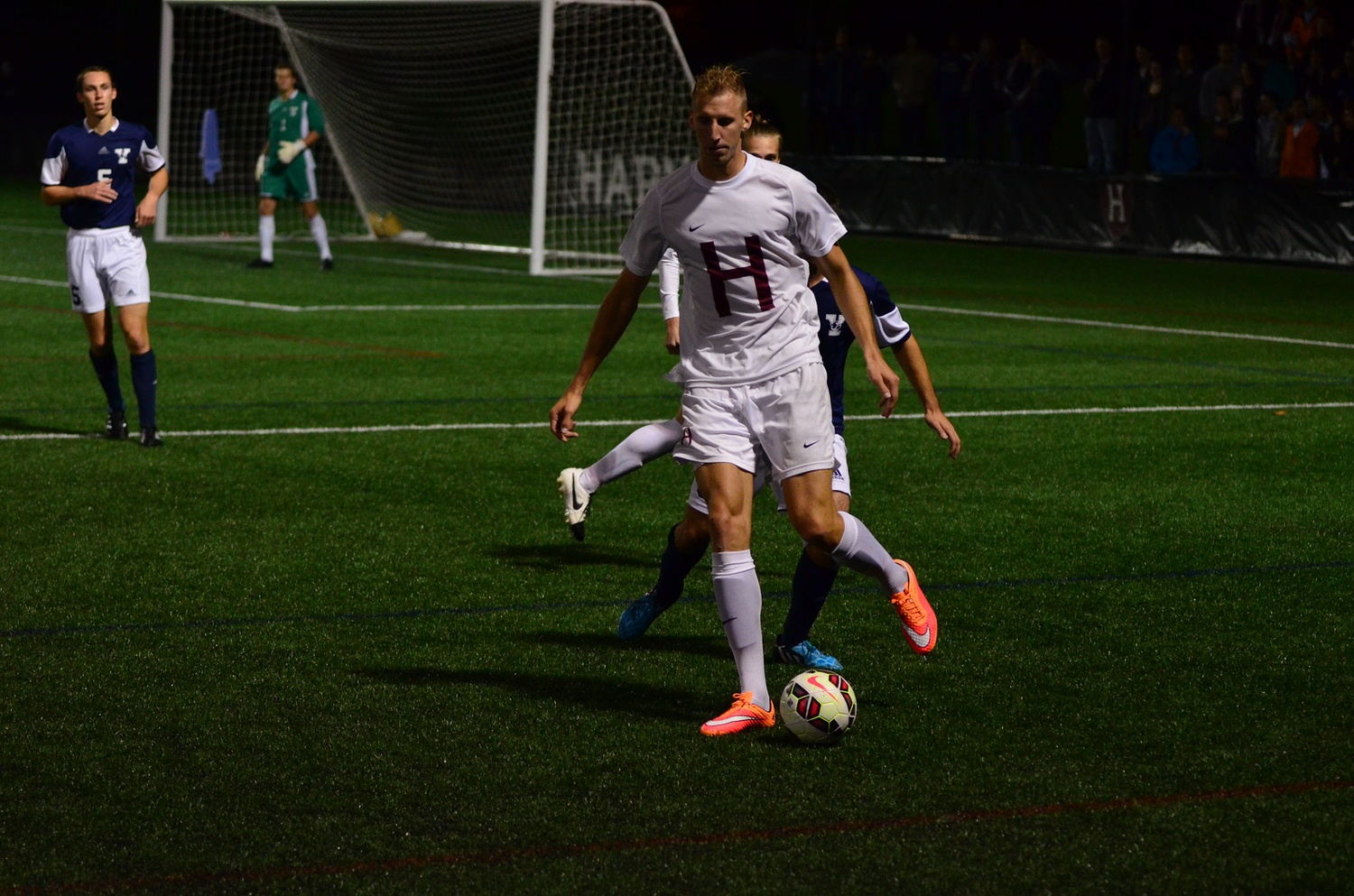 Despite seemingly taking control of the match after evening the scoreline at one, the Crimson quickly conceded their second goal of the night to suffer their second loss of the season. By Sofia Donnecke
By Julio Fierro, Crimson Staff Writer

With just under eight minutes left, facing a 1-0 deficit for the third time in as many games, the Harvard men’s soccer team (0-2-1) evened the score on senior forward Oliver White’s second goal of the season, making it look as if its match with UConn (1-0-3) was destined for overtime.

However, just 38 seconds after the Crimson breakthrough, the Huskies delivered a blow of their own as senior midfielder Tyler Leeman finished off a three-man attack in transition which broke down the Harvard backline, giving UConn a 2-1 lead which would hold until the final whistle.

Leeman’s strike capped an offensive burst which saw the two teams combine for three goals in the span of a mere two minutes and six seconds, a stark difference from the defensive demeanor which had dominated the majority of the game.

After a defensive struggle in the first half which featured more offsides calls than shots—three versus two—the two offenses came to life in the second stanza.

The Crimson in particular seemed to gain a second wind, as the home team constantly pressured its opponents in the frame, taking eight shots after being held to none in the first half by the Huskies’ back four.

“We did a lot better with some dynamic forward movement,” White said. “We tried to make some improvements and link together the forwards and midfield, trying to be on the same page going forward in the second half.”

Though Harvard ultimately outshot its opponent 8-6, it was UConn who generated the most dangerous chances as Crimson keeper and co-captain Evan Mendez had some difficulty getting a hand on a low shot by freshman forward Abdou Thiam.

Following a few more opportunities on the Harvard end, the Huskies finally opened the scoring a few seconds after the 81 minute mark, as junior defenseman Jakob Nerwinski’s cross deflected off of Crimson junior Daniel Smith’s head. The ball landed at the feet of sophomore defenseman Andrew Geres, who booted it past Mendez.

Geres’ strike was also the first goal of the season for UConn after the team had been held to scoreless draws in their first three games, one of which was against defending Ivy League champion Dartmouth. It was also the redshirt sophomore’s first career collegiate point.

The goal, paired with White being substituted back on for freshman Cesar Farias, ignited the Harvard attack, as the Crimson became the first team to score on UConn all year.

White’s goal evened the score at one as the Belmont, Mass., native headed sophomore midfielder Sam Brown’s cross from the wing past senior keeper Scott Levene. Brown’s cross was the second assist of the season for the sophomore.

The celebration was short-lived, however, as UConn quickly moved forward in transition from the center spot.

A three-man attack consisting of Geres, Leeman, and sophomore midfielder Alex Sanchez used a series of quick passes to break down the Harvard defense.

The rush eventually ended when Geres crossed it to Leeman at the back post for the easy tap-in.

“We knew the whole time they were a fast team,” White said. “It just happened that, that play, things just came together for them. [They] put a couple good passes together…they got forward, [and] put in that cross.”

After a season which saw the team go undefeated at home, the Crimson hasn’t been as successful thus far within the confines of newly-renamed Jordan Field.

Harvard has conceded the first goal in all three of its matchups and has only held a lead for about eight minutes.

The Crimson also struggled with UConn’s offside trap, as Harvard accounted for all four of the game’s offsides decisions as the team continuously attempted to play its forwards through on goal.

The eight shots were also a far cry from the 17 a game average which the squad had managed in its first two games.

But despite coming away from its three-game homestand without a win, the Crimson has shown some positive signs moving forward.

After conceding an average of just over 12 shots a game against SMU and Loyola Marymount, the team held UConn to six shots. Harvard has also managed to outshoot all of its opponents.

Building on these positives and cleaning up the little details will be key for the Crimson as it goes on the road for its next five games, beginning with one against Stony Brook on Sunday.

“I don’t know if we make a lot of changes,” Lehrer said. “I think we just set down some habits, be good at what we do, and improve some stuff [such as] detail.”