While the School of Engineering and Applied Sciences has surpassed its goal, House renewal fundraising lags 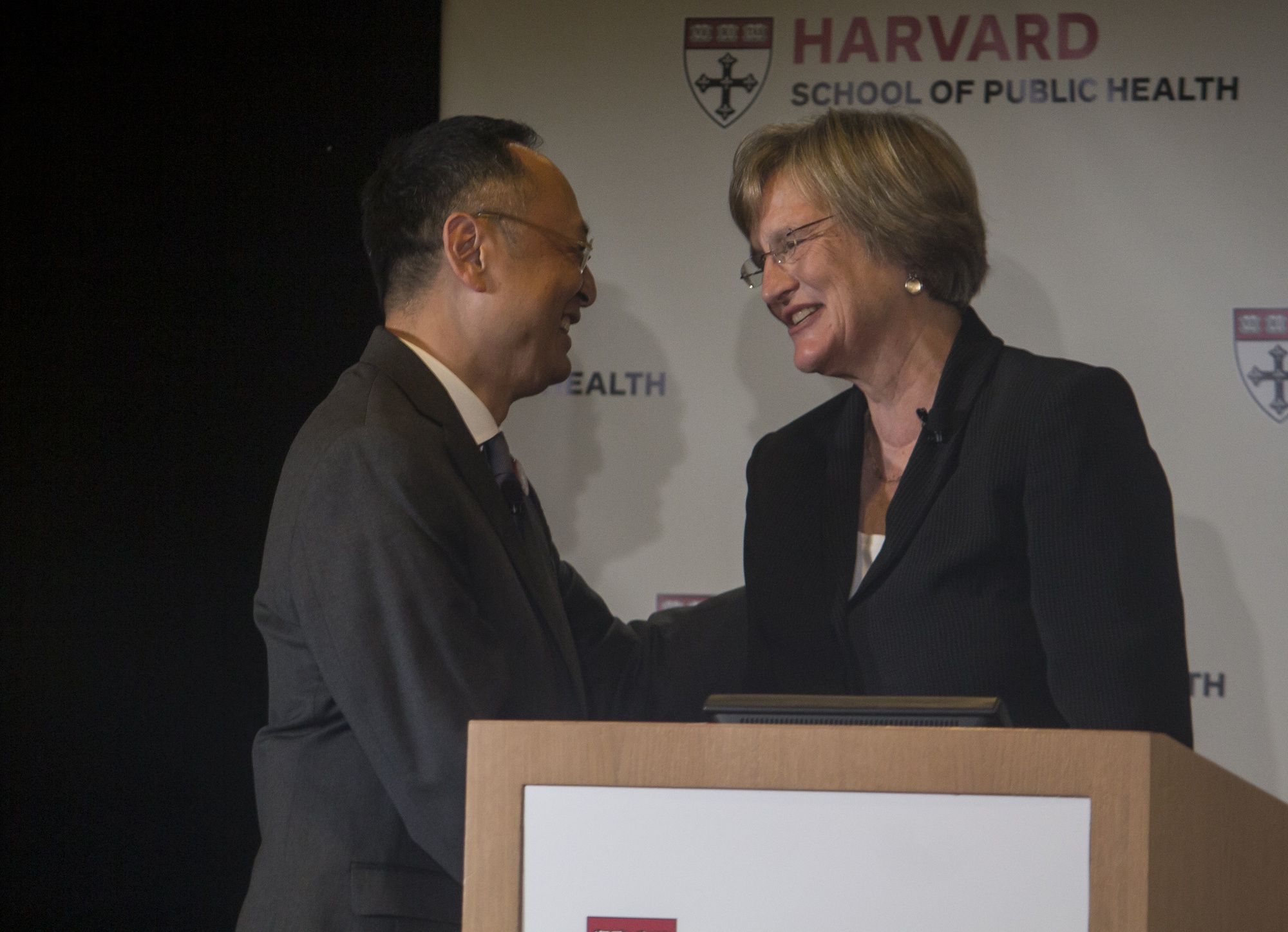 University President Drew G. Faust welcomes Gerald L. Chan on stage at the unveiling of his foundation’s $350 million gift to the Harvard School of Public Health in September 2014.
By Meg P. Bernhard and Mariel A. Klein, Crimson Staff Writers

Harvard has raised more than $6 billion in gifts and pledges in its capital campaign, charging still closer to its public goal of $6.5 billion, according to an email addressed to Faculty of Arts and Sciences campaign steering committee members that The Crimson obtained on Thursday.

The FAS’s campaign has also nearly reached its $2.5 billion goal, having raised a total of $2.2 billion, according to the email. 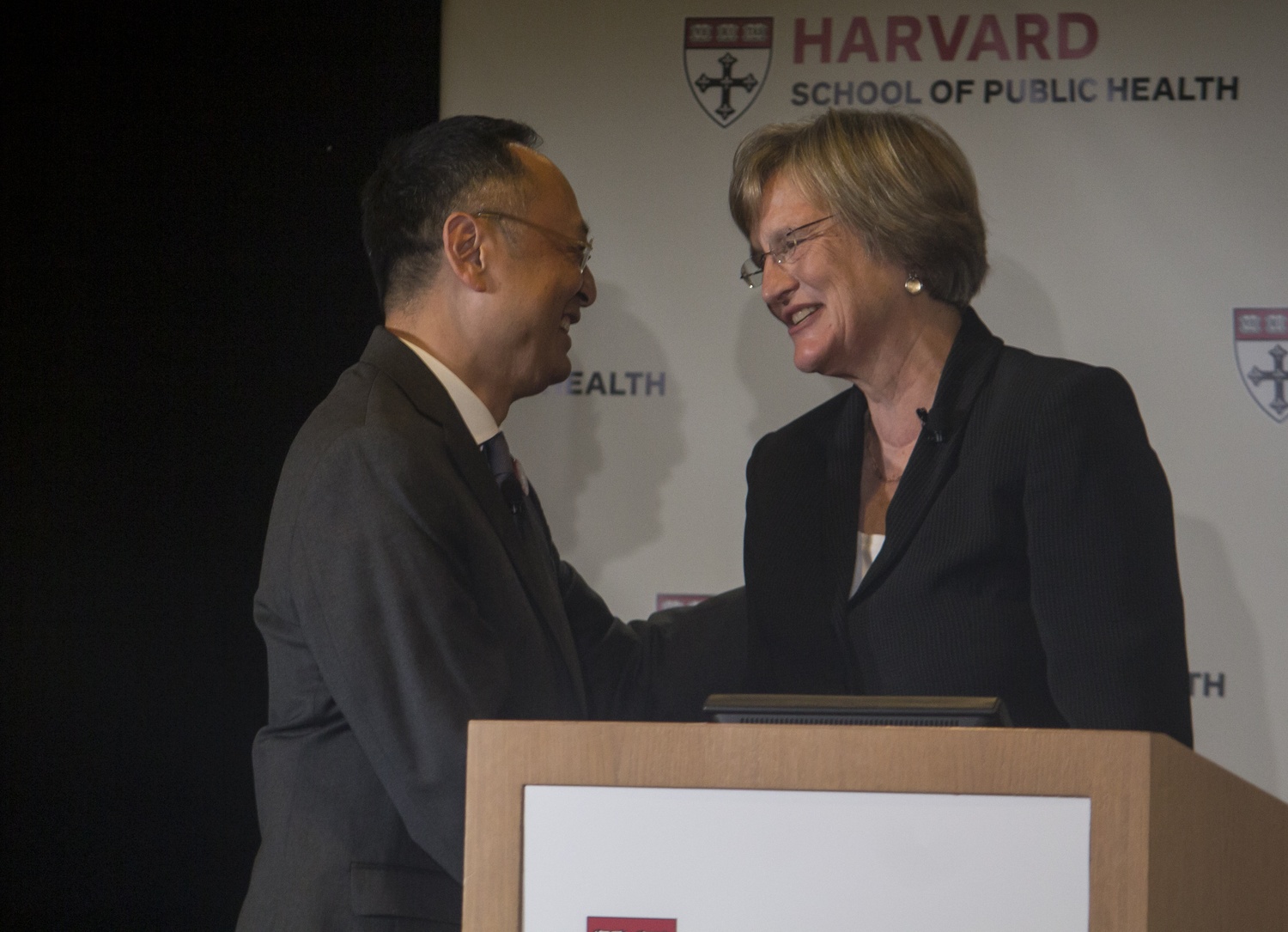 University President Drew G. Faust welcomes Gerald L. Chan on stage at the unveiling of his foundation’s $350 million gift to the Harvard School of Public Health in September 2014. By Zorigoo Tugsbayar

The University-wide fundraising drive is now two years into its public phase, which launched with fanfare in September 2013. Harvard had already received $2.8 billion in gifts and pledges during its “quiet phase” at the time of the launch, and since then it has moved ahead at full steam, propelled by nine-figure gifts from Kenneth C. Griffin ’89, to College financial aid; billionaire Gerald L. Chan, to the School of Public Health; and hedge fund magnate John A. Paulson, to the School of Engineering and Applied Sciences.

Despite the progress ahead of schedule, University President Drew G. Faust said last week that officials have no current plans to raise the campaign’s goal. She also declined to share an updated fundraising total. The target of $6.5 billion would be a higher education record if met.

Officials were more forthcoming, though, in the recent communication with FAS donors. An online report linked in the email to the FAS campaign steering committee, dated Aug. 31, paints a portrait of the FAS drive’s progress so far, detailing each of the campaign’s priorities, the scale of its gifts, and the regional breakdown of all donations. It also includes a graph detailing fundraising progress that runs through June 2018, suggesting that the campaign still has nearly three years of public phase fundraising remaining.

Though the FAS drive has received 179,721 total gifts, a majority of the $2.2 billion total has come from 40 donors who each gifted $10 million or more, raising $1.27 billion combined, according to the report. A total of 60,835 donors have contributed to the FAS campaign so far, and 303 people have given $1 million or more. A graph of FAS’s fundraising progress since 2011, the quiet phase of the campaign, shows that the total raised has steadily exceeded the projected track necessary to meet the campaign’s 2018 close.

Officials also hoped to court one mega-gift of $250 million or more. They have achieved that, through Paulson’s record-breaking $400 million donation to SEAS.

As for the number of donations of less than $1 million officials expected to receive, the report simply said FAS needed “many.”

At the beginning of its campaign, FAS officials named a number of priorities toward which gifts could be allocated. Some, according the report, are ahead of schedule. SEAS has raised $590 million, far exceeding its $450 million goal. The majority of that total comes from Paulson’s $400 million gift—the single largest donation in Harvard’s history—which renamed the school. In another prominent gift last year, former Microsoft CEO Steven A. Ballmer ’77 paid for 12 new Computer Science professorships.

Another priority doing well is the “Faculty and Our Scholarly Enterprise” category, which includes professorships and has raised $541 million toward its $600 million goal.

Gifts directed toward the student experience, such as athletics, have brought in $204 million, while financial aid at the College—helped in large part by Griffin’s 2014 gift—has accrued $386 million of its $600 million goal. The Dean’s Leadership fund has raised $163 million and has a goal of $250 million.

Some priorities, like the College’s much-touted House renewal project, are further from being fulfilled. House renewal fundraising, which supports construction like the renovation of Dunster House, is just under its halfway mark, at $197 million in gifts and pledges with a goal of $400 million. Another priority that has catching up to do is “Leading in Learning,” which has raised $62 million in gifts and pledges but has a goal of $150 million.

—Staff writer Theodore R. Delwiche contributed to the reporting of this story.