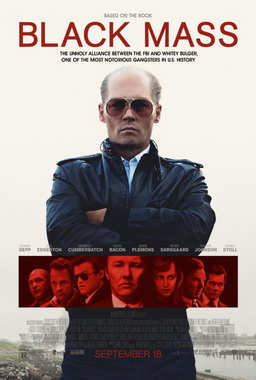 Decades after the peak of his influence on the streets of South Boston, infamous Irish-American gangster James “Whitey” Bulger once again captivated Beantown with the release of “Black Mass,” a new biographical drama starring Johnny Depp as the notorious crime boss. During the film’s opening weekend, six out of the top 10 grossing theaters nationwide, including the highest three theaters overall, were located in Boston, which was exclusively responsible for almost 10 percent of the film’s opening weekend sales. Sharing the screen is Joel Edgerton as FBI agent John Connolly, a childhood friend of Bulger’s from Southie who guarantees him immunity in exchange for serving as an FBI informant. Throughout the following two decades, Bulger uses this relationship as a means of avoiding criminal prosecution while relying on the FBI to take down his enemies. This corrupt bargain is outlined at length by investigative journalists Dick Lehr and Gerard O’Neill in their novel of the same name, which was adapted for the silver screen by Jez Butterworth and Mark Mallouk.

Although director Scott Cooper (“Crazy Heart”) attempts to unravel the mythos of Whitey Bulger over the course of the film’s two-hour runtime, “Black Mass” frequently comes off as a redundant entry in the gangster film genre. The closest and most apt comparison is to Martin Scorsese’s 2006 Best Picture-winning film “The Departed,” which was similarly set in Boston and also loosely based off the story of Bulger and Connolly. But whereas the Bulger of “Black Mass” is eerily similar to the DC Comics character the Joker—brooding, sinister, and capricious—“The Departed” more memorably features Jack Nicholson as a degenerate, perverted, moral cesspit of a man. Unlike Nicholson’s Bulger stand-in, Frank Costello, Depp’s Bulger isn’t at all out of place at a friendly backyard barbecue with FBI agents.

To be sure, Depp deftly captures the spectrum of Bulger’s idiosyncrasies with a career-defining performance—he effortlessly switches from smiles and charm while escorting an old woman down the street to a cold face of ruthless pragmatism while gunning down a man in a parking lot in broad daylight. Physically, too, Depp transforms himself, donning Bulger’s trademark aviator sunglasses and popped-collar leather jacket, his slicked back hair mimicking the mobster’s wide forehead and receding hairline. Edgerton’s performance is worth noting as well, as he transforms from an ostensibly honorable lawman into a corrupt agent so completely co-opted by Bulger that he becomes an accomplice to the murder of innocent men.

But Butterworth and Mallouk’s script fails the rest of the film’s talented ensemble cast, which includes Benedict Cumberbatch, Dakota Johnson, Kevin Bacon, Corey Stoll, Adam Scott, and Jesse Plemons (a dead ringer for Matt Damon)—all of whom play important characters that frustratingly do little other than service the plot. Key members of Bulger’s crew are given even shorter shrift by the script, with mobsters Stephen Flemmi (Rory Cochrane) and Johnny Martorano (W. Earl Brown) simply written as generic henchmen. The film does include occasional moments of unintentional hilarity when the classically-trained and usually on-point Cumberbatch, who plays younger brother and State Senate president William “Billy” Bulger, veers into Seth MacFarlane territory with his hit-or-miss Boston accent.

Although Whitey Bulger was arrested in 2011 after spending more than 16 years as a fugitive—12 while on the FBI’s Ten Most Wanted list—his legacy clearly extends into the present day. Propelled by the reputation of its subject, “Black Mass” is captivating at moments, unflinchingly gruesome at others, and ultimately a clear indictment of the duo at its core. Despite its successes, the film is haunted by the shadow of Scorsese—and that makes its failings all the more apparent.