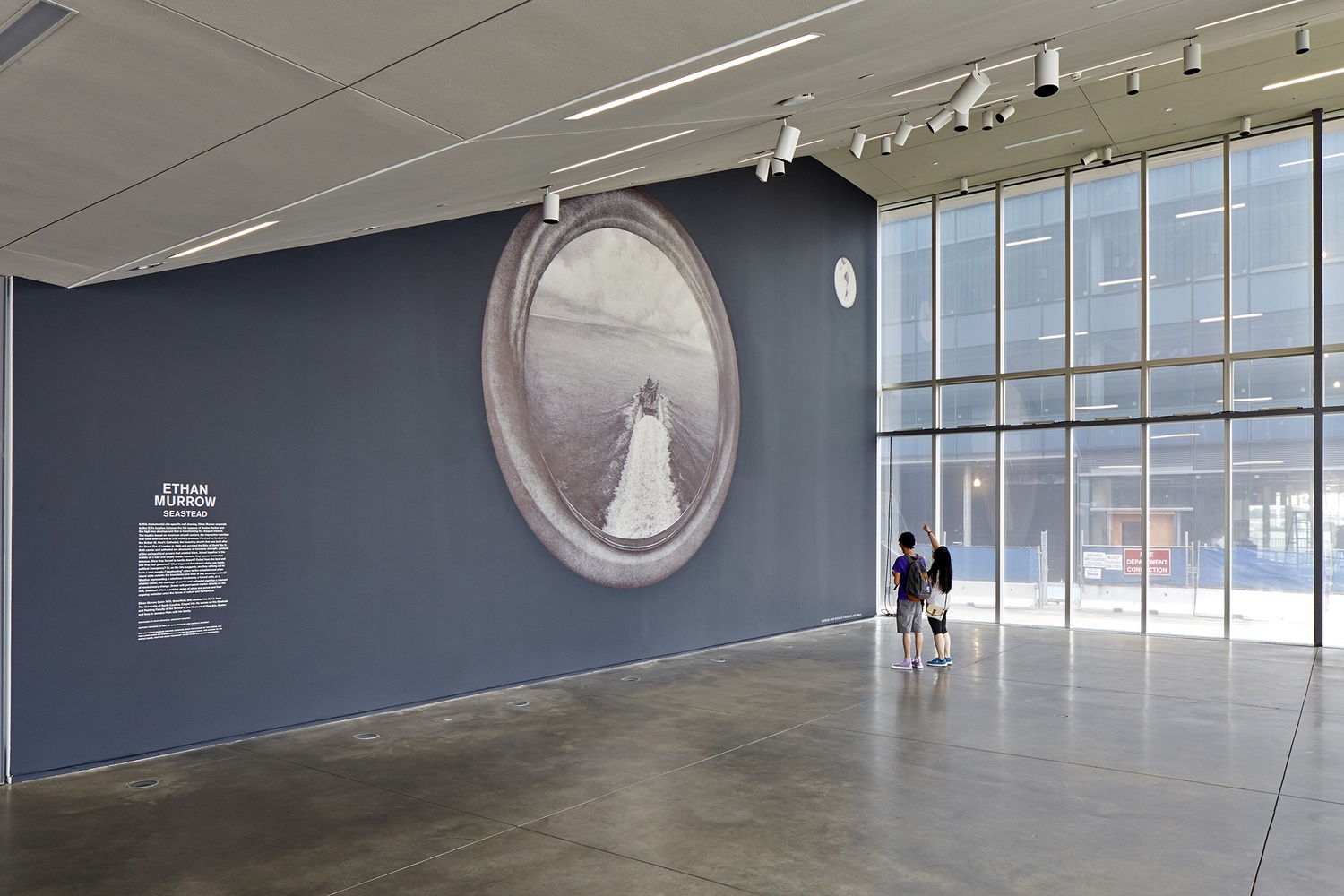 Ethan Murrow's installation "Seastead" rests in the Sandra and Gerald Fineberg Art Wall of the front lobby of the Institute of Contemporary Art. By Courtesy of Charles Mayer
By Ariana L. Tyler, Contributing Writer

Located in the front lobby of the Institute of Contemporary Art, the Sandra and Gerald Fineberg Art Wall has been transformed in the past by artists such as Dave Muller, Francesca DiMattio, and Matthew Ritchie. When Ethan Murrow, an artist known for his photorealistic graphite drawings, was selected to become the next artist to enrich this space, it marked the beginning of a nine-month back-and-forth between Murrow and the Institute’s assistant curator, Ruth Erickson. Murrow and Erikson harkened back to this exchange on the evening of Sept. 17, when the ICA hosted a public talk between the two. After the pair touched upon the logistics of planning out such a project, the night opened up to an exploration of Murrow’s inspirations and ruminations on the nature of visual art.

For Murrow, the early stages of this project were the beginning of one of his largest and most novel undertakings. Accustomed to having full creative autonomy, Murrow had to cooperate with Erikson in order to find an image that satisfied both himself and the museum. “I spend a lot of time in my studio making work all by myself,” Murrow says. “And so to have to collaborate with her, and then collaborate with the team that helped me to actually make the thing is unique. It takes patience and you have to be humble and try and figure out what works for the museum as much as for yourself.”

According to Murrow, one of the first things he and Erikson discussed was the nature of the space he would be working in. The Gerald and Sandra Fineberg Art Wall occupies an offshoot of the front lobby that is disconnected from the natural flow of the museum. “It’s a funny space,” Murrow says. “It’s both really prominent, and it’s also an afterthought all at once.” Murrow said that he sought to develop a composition that would add depth to the space and draw visitors in. He and Erikson also wanted the visitors to experience an image that was thematically site-specific. Inspired by the ICA’s waterfront location, he approached concepts such as environmental changes within the harbor, flooding, and the history of Boston itself. In particular, he placed an emphasis on the fragility of the surrounding neighborhood through his seascape. 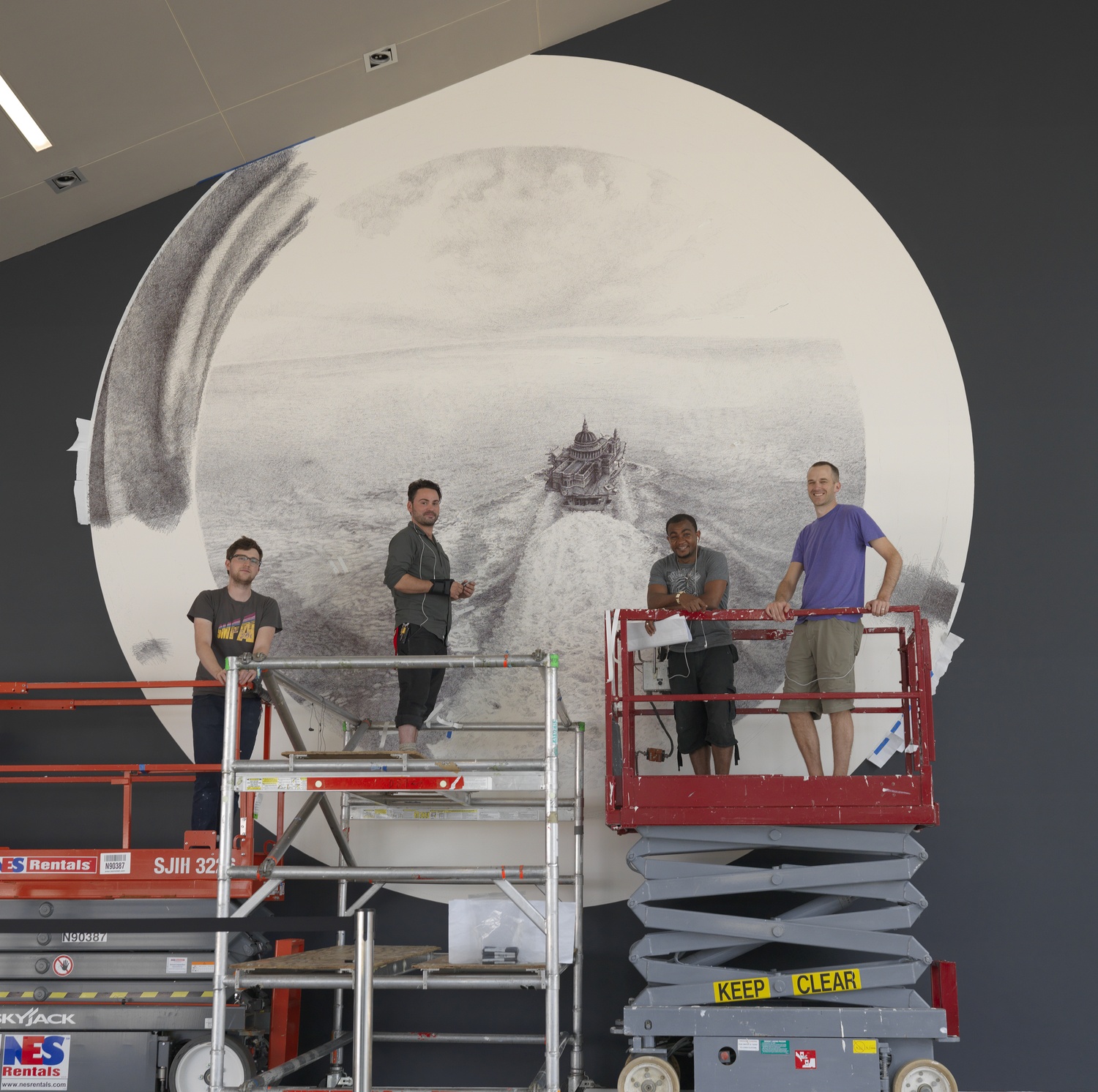 Artist Ethan Murrow and his crew as they prepare "Seastead" for the Institute of Contemporary Art. By Courtesy of Stewart Clements

The result of this is an immense black and white wall drawing titled “Seastead.” The image depicts the wake of an aircraft carrier as it recedes into a vast seascape. Atop the vessel, the iconic St. Paul’s Cathedral lies askew. “We settled on this particular image in part because we liked the way in which it added drama to the space,” Murrow says. “This image is intended to be a kind of narrative cliff, as if something has just happened within the harbor, or this building has been stolen, or it’s being rescued. It’s supposed to be a sort of tip of an arc of a narrative.” However, Murrow wants to refrain from over-determining what that narrative is. “I’m hoping people will invent stories,” he says. “I have my own sort of tendencies about what [I] hope those stories will be. But I also recognize that that’s not the way art works, and people bring their own attitudes and opinions to it.”

He maintains that even an artist’s understanding of his own work can change over time. He is deeply suspicious of applying any finite meaning to an image, and this perhaps harkens back to one of his greatest inspirations: historical images. “I think that we spend so much time looking at history through singular images,” Murrow said. “We use singular images to try and stand for an entire moment, an entire era even sometimes. And I think that’s both sensible, because we have to try and come to some sort of conclusion about what happened—but I also think that’s really problematic, because then there is so much that’s left out.” This concept is one that Murrow returned to again and again throughout the night; for him, the way individuals experience images is as nuanced as it is mutable.