In the Wake of Sexual Assault Survey, Faculty Assess Their Role 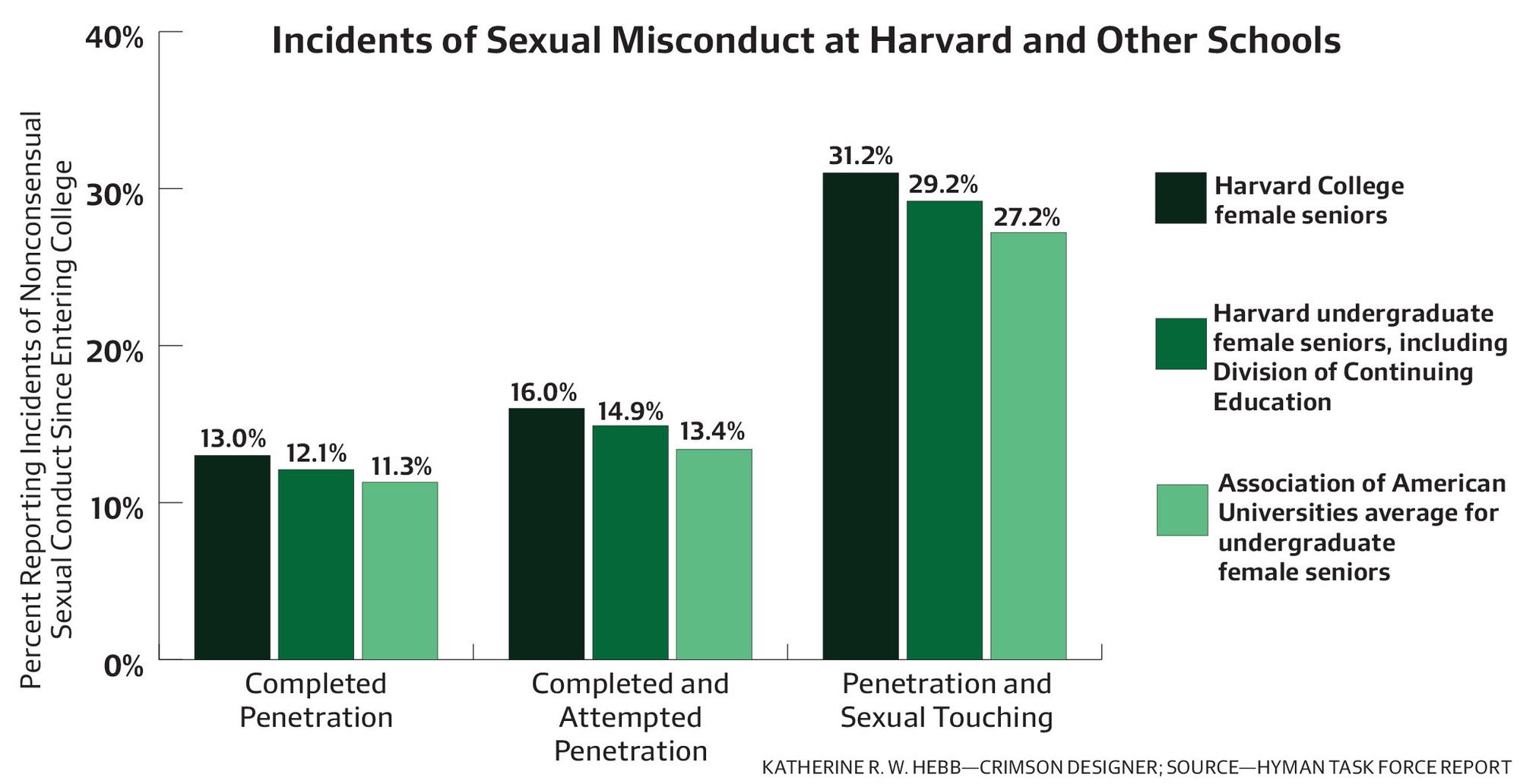 Slightly more than 29 percent of surveyed Harvard senior women—a category which includes some students in the Division of Continuing Education—reported that they had experienced nonconsensual penetration and sexual touching since coming to college. The rate was 27.2 across all 27 schools that participated in the Association of American Universities survey. When Harvard DCE students were removed, the prevalence rate of nonconsensual penetration and sexual touching rose from 29.2 percent to 31.2 percent of Harvard respondents, according to a report from former Harvard Provost Steven E. Hyman.
By Karl M. Aspelund and Meg P. Bernhard, Crimson Staff Writers

Last fall, History professor Alison F. Johnson’s already-frenetic schedule was punctuated with numerous meetings to consult with undergraduates, and other affiliates of the Faculty of Arts and Sciences, as she prepared the school’s new sexual harassment procedures.

Monday—more than nine months after Johnson presented a final draft of those procedures to the Faculty—Harvard released the results of its sexual climate survey, pushing Johnson once more into action. Again, she engaged in those somber conversations with undergraduates, beginning her History seminar Tuesday by explaining the resources available to undergraduates who have been sexually harassed or assaulted.

“I just walked into the classroom, and I said, ‘OK, here’s what you need to know before you leave this class today,’” Johnson said.

A day earlier, shortly after the findings were released in a University-wide email, FAS Dean Michael D. Smith sent an email of his own, addressed only to the Faculty. In it, he urged faculty members to support students and new school-wide programs aimed at tackling the problem of sexual assault.

The answer to that question was not immediately clear to faculty members, many of whom, like Johnson, say they are committed to effecting change in the wake of Monday’s news that 31 percent of senior women at the College surveyed reported being victims of some kind of sexual misconduct. While the roles of administrators and students in addressing issues of sexual assault are scrutinized, faculty members have found themselves on uncertain ground, not sure of their own role in solving an issue that Monday revealed affects so many of their students.

Many professors insisted, like Johnson, that they should not and would not remain on the sidelines. They have a legal obligation under Title IX to report cases of sexual assault to proper authorities if students tell them they have been sexually assaulted. It starts there, faculty members said: That spirit of being present in a time of need underpins their role.

Faculty members of all departments and with varying degrees of involvement with crafting sexual assault policies on campus felt compelled to speak to undergraduates in their classes this week about the many facets of the crisis. They include professors from a wide range of fields and schools, all of whom teach undergraduates—University professor Laurel Ulrich, History of Science professor Sophia Roosth, Harvard Divinity School professor Ahmed Ragab, Applied Physics professor David Keith, and Kennedy School of Government lecturer Timothy P. McCarthy ’93, among others.

Faculty members’ responsibility moving forward, then, folds into a central duty of their profession, said Divinity School professor David L. Carrasco: to connect with students outside the classroom.

“Students are on campus for their whole day,” he said. “It’s a very different world from lectures and sections.”

This non-academic world is one with which Johnson said she is already partly familiar. Because she consulted with many students while creating FAS's Title IX procedures, she said she was not surprised with the survey's results.

She said she is disappointed, though, that a low percentage of students did not know how to report a case of sexual assault. Johnson said she feels it is her responsibility to be available for students who may need guidance and point them to on-campus professionals.

Of course, Johnson said, the end goal is to prevent sexual assault from happening in the first place. But having constant conversations is a good place to start.

“It’s important for me to help make this a topic that seems like a normal thing for us to talk about in the course of our training students and the course of our interacting with students,” Johnson said. “Rather than a special conversation when it hits the news in particularly explosive way.”