What started as a plan to host a formal party event amidst fresh vegetables and garden hoes on the patch of grass and dirt in front of Lowell House last weekend went awry when it drew interest from many hundreds of students, prompting concern from College administrators.

The proposed party, dubbed a “Farmal,” was supposed to host undergraduates and others at the Harvard Community Garden last Saturday night, but it was canceled after nearly 4,000 people indicated plans to attend on Facebook. 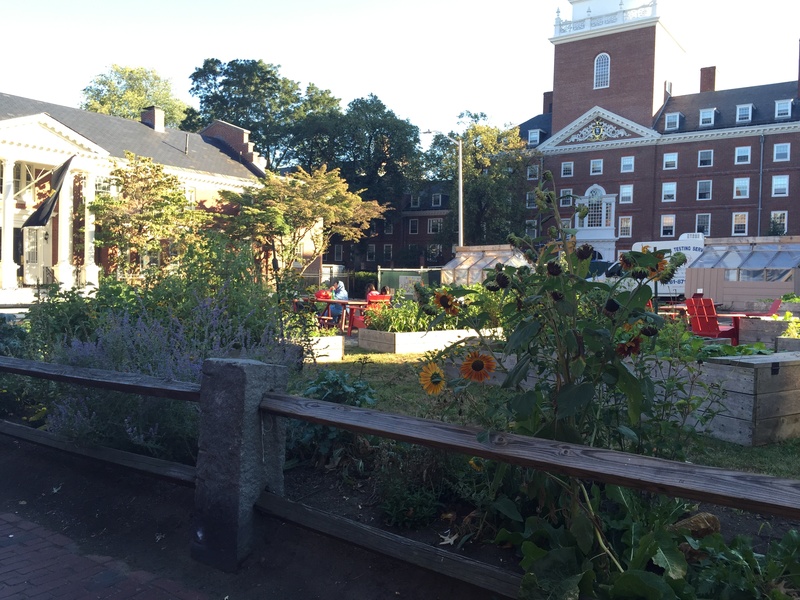 The Harvard Community Garden outside of Lowell House was slated to be the location of Farmal: The Real Garden Party last Saturday, but was canceled due to space concerns.
Photo: Olivia A. Nicholls

The garden, located on a patch of land in front of Lowell House on Mount Auburn Street, has a capacity of about 100 people, according to Margiana R. Petersen-Rockney, an adviser to the garden. In an effort to control the number of attendees, students organizing the party moved to a ticketing system, offering 400 free tickets to Harvard students and 200 $5 tickets to area residents, according to Logan N. Balliett ’16, a student involved in planning. They ran out in 24 hours.

They could not, however, ticket the event without a one-day entertainment license, per Cambridge city policy. With so much interest, organizers turned to the College’s Office of Student Life for guidance on how to obtain the necessary license.

Their request, however, was met with concerns from administrators. According to Amy L. Vest, the OSL’s director of student programming, in discussion with organizers, she questioned the feasibility of the event, due to challenges related to space constraints, nearby construction, potential damage to the garden, and the sheer number of people expected to attend.

According to Balliett, Vest was specifically uncomfortable with the possibility that an unruly crowd would show up to the party. She declined to seek a license for the event.

Without funds from tickets sales, Balliett said, organizers could not pay for security, among other things, and recognizing Vest’s concerns, they decided to cancel the event.

“Imagine 4,000 people showing up, and there’s four garden kids trying to corral them all and try to control the situation,” said Camila Victoriano ’16, the publicity chair for the garden. “I mean, it would have been impossible.”

While event organizers say they understand the concerns about the party that the College raised, the cancellation nonetheless prompted questions about administrative support for inclusive social events. In canceling it, organizers updated the event Facebook page description to read that they were “saddened to announce this change since we were very excited to provide an open, inclusive event in a university where that is hard to find.”

In recent weeks, students and administrators alike have scrutinized the role of social space at the College. Specifically, administrators have criticized single-gender final clubs, raising concerns about the potential for alcohol abuse and sexual assault to occur on their off-campus properties. Students have also critiqued House renewal construction plans and the move away from private common rooms and bathrooms.

The Office of Student Life hosted a forum for student group leaders last week, and according to Vest, one student asked Dean of the College Rakesh Khurana a question about the party’s cancellation in relation to the ongoing conversation surrounding social spaces on campus.

For now, organizers plan to reschedule a smaller version of the event for next semester and limit it to Harvard students.

Cabinet of Women's Group Leaders Will Relaunch in October