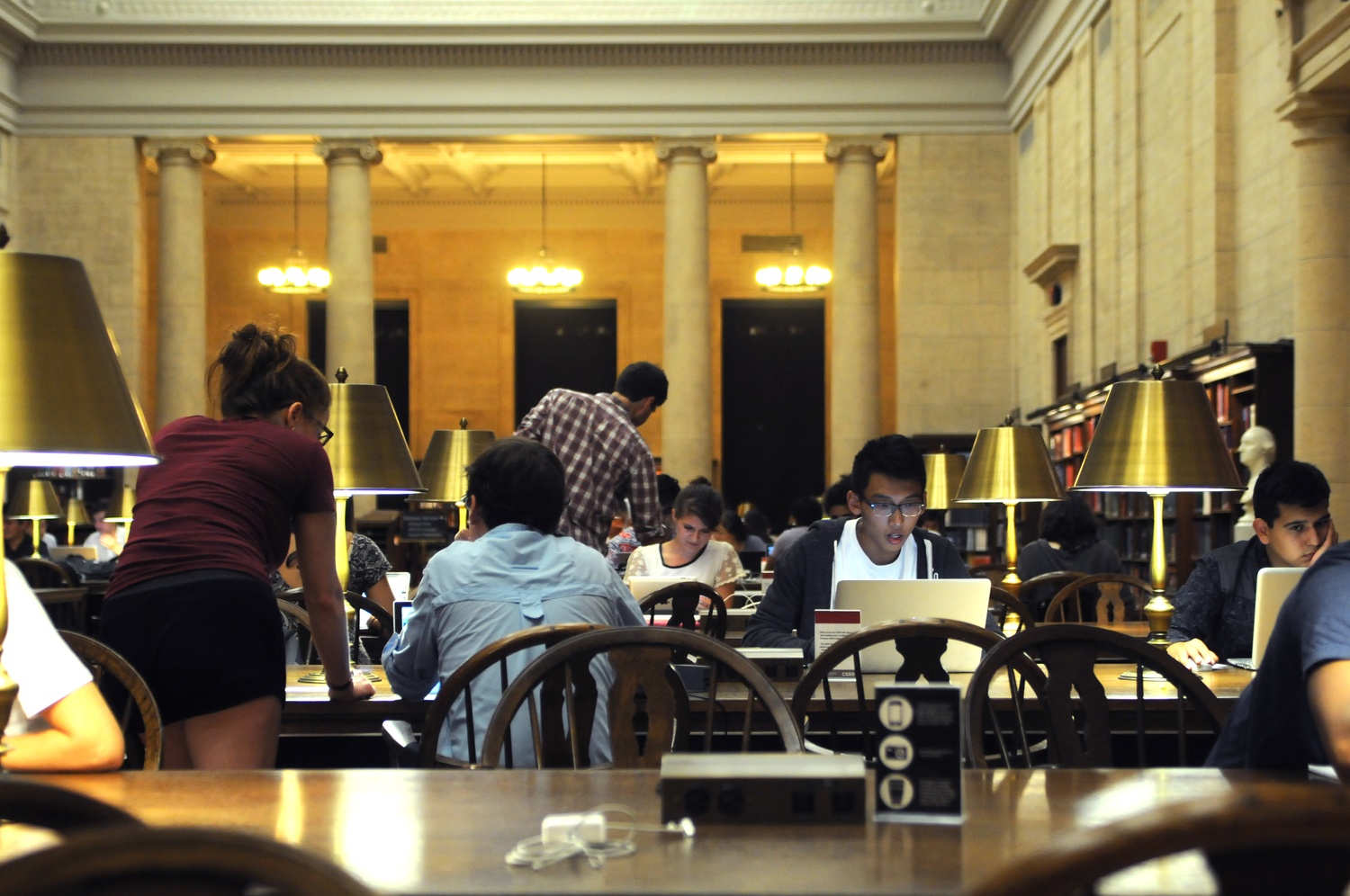 Students and teaching fellows congregate in Widener Library for one of many CS50 office hours planned for the coming months. In prior years, office hours were held in places like Annenberg and Mather House, but this year will feature them for the first time in the historic library. By Y. Kit Wu
By Melissa C. Rodman, Crimson Staff Writer

It was nine o’clock on Tuesday night, and the Loker Reading Room in Widener Library was buzzing. Students sat in pairs, small groups, or even alone, as teaching fellows, identified by crimson lanyards and nametags swooped in to offer ready assistance.

These students were in Widener because the popular undergraduate course Computer Science 50 was granted permission to host its office hours there. Widener Library extended its own hours to host the group. This year, the library will remain open on weekdays until midnight, unlike its previous 10 p.m. closing time. CS50 office hours run from 9 p.m. until midnight.

“We’re very excited to be here,” said David J. Malan ’99, a Computer Science professor of the practice who teaches the course. “This is a good way of easing into the new space,” he added, saying that the number of students was slightly greater than what typically arises for the office hours for the first problem set.

All around the room, activity abounded and noise bounced off of Loker’s iconic aqua and rosette-tiled ceiling. Designated CS50 greeters stood in the center of the room, holding stacks of information sheets. “Are you here for CS50 office hours?” each one asked with enthusiasm, as bewildered students nodded and promptly took their seats at the sturdy wooden tables.

“This is actually my first time studying here,” said Emily Siwachok, a Divinity School student studying in the space prior to the arrival of CS50. “And there’s lots of chatter and people helping people.”

Only 20 minutes into the night, two students nudged the leather-studded doors to the reading room, peered their heads in, mumbled something to one another, and quickly left. “This is CS50 office hours,” one muttered on the way out.

Many freshmen acknowledged that CS50 office hours marked the first time they set foot in Widener. Alexis Zapien ’19, at one table, said Tuesday was the first night he ever attended office hours. “I think it’s really cool that such a large group of people can come together…[It’s] a bonding experience.”

Two tables down, Matthew J. Sciamanna ’19 had just returned to his laptop. Armed with a half-eaten peanut butter sandwich and a disposable mug from the Brain Break set up in Widener’s basement cafeteria, he said he never has been to the library before the course’s office hours. “It’s really ridiculously beautiful,” he said. “Are there office hours for every class in here?”