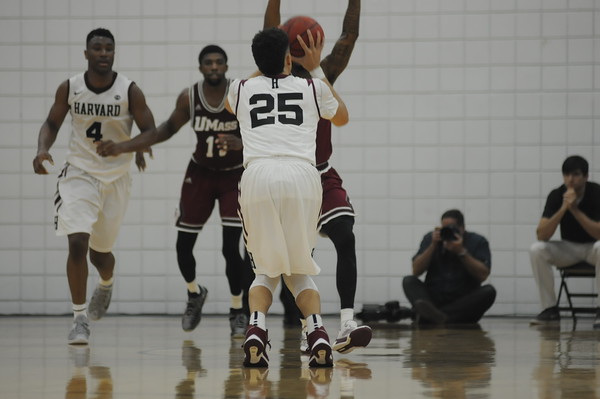 Freshman guard Corey Johnson failed to hit a three against Ryerson Tuesday, the first time the rookie has gone an entire game without making a trey. The starter is averaging 9.6 points per game this year. By Eliza R. Pugh
By Stephen J. Gleason, Crimson Staff Writer

WASHINGTON, D.C.—In a game marked by turnovers, long scoring droughts, and physical play on both ends of the floor, Harvard (9-8, 1-0 Ivy League) overcame Howard (8-10, 2-1 MEAC), 69-61, on Saturday afternoon. In a historic meeting for the two schools and a homecoming for Harvard coach Tommy Amaker, Harvard rode an 8-0 run late in the second half to put the Bison away for good and finish non-conference play with a .500 record.

With eight minutes to go, a three-pointer by Howard junior guard Keon Hill tied the contest for the fourth time of the afternoon. When the teams returned to the floor, Crimson senior forward Patrick Steeves, who finished the game with eight turnovers, drove into the lane and hit an off-balance layup. After his team picked up a stop on the other end, freshman point guard Tommy McCarthy, who had four turnovers of his own, buried a three. The dagger came the next time down the floor when junior guard Corbin Miller drained a trey from the corner to put Harvard up eight. The Bison took a timeout with 6:05 to play but it was the closest the hosts would get the rest of the way.

“We got it in, and then we got it out for three-point shots,” Amaker said. “Zena’s interior production helped us to settle us down, he made his free throws, and then we got the ball back out to get some open threes and we nailed them.”

After a slow start by both teams, the Crimson looked as though it would secure the victory by halftime. Harvard’s first five field goals all came from behind the arc, as Steeves and Miller combined to outscore Howard 15-6 to start the game. The Crimson would only score 11 points the rest of the half, however, as Harvard finished the first 20 minutes with 14 turnovers and entered halftime down one.

With freshman sharpshooter Corey Johnson’s sidelined with an illness, the Crimson’s bench became thinner when senior forward Agunwa Okolie and freshman big man Balsa Dragovic both pick up their fourth personal fouls before the second half’s first media timeout. With the team’s starting frontcourt on the bench, junior forward Zena Edosomwan decided to establish the inside presence Harvard had been lacking. With Harvard leading by three, Edosomwan scored six of the next 12 Crimson points.

“I just was definitely more aggressive and, for me, I like to let the game come to me,” Edosomwan said. “And then in the second half when I was more aggressive, I picked it up and I started seeing more openings and I didn’t like the way I was finishing early in the first half so I picked it up. There’s plenty of games where the first half is kind of slow but you know, on switch.”

The Bison hung with Harvard during the stretch not letting the lead get to more than five points, and a 7-2 Howard run set the stage for the heroics that followed the under-eight timeout.

“Close games definitely help,” Steeves said. “We have veteran guys, [captain] Evan Cummins has been in countless games like that, he knows exactly what to do when it comes down to the wire in a game. Agunwa Okolie, the same thing, he was in foul trouble but late in the game he came up for us and we were able to keep ourselves collected.”

The Crimson finished the game with 25 turnovers, its most this season, but with only three in the game’s final 7:47. The lack of turnovers and a reenergized defense were the keys to the closeout. Steeves added 12 points in the game’s final eight minutes to lead the Crimson with 18, and Harvard finished the game by making seven of its final nine shots.

The Bison finished the game with four double-digit scorers, with guards Dalique Mingo and Damon Collins contributing 14 apiece, but the team came up short despite the electric atmosphere at a sold-out Burr Gymnasium. Perhaps more detrimental to Howard, the Bison was without junior guard James Daniel III, as the nation’s leading scorer was sidelined with an elbow injury.

Amaker was able to pick up a win in the D.C. Metropolitan Area for the first time since 2011. The Falls Church, Va. native who starred at Woodson High School in Fairfax had a large contingent of family and friends behind his team’s bench.

“It’s definitely great to be home,” Amaker said. “We have other staff members from the area so to have the chance to be in front of your folks, people who have known you your entire life, you know how that can be if things don’t go for you, they won’t let you forget it your entire life.”