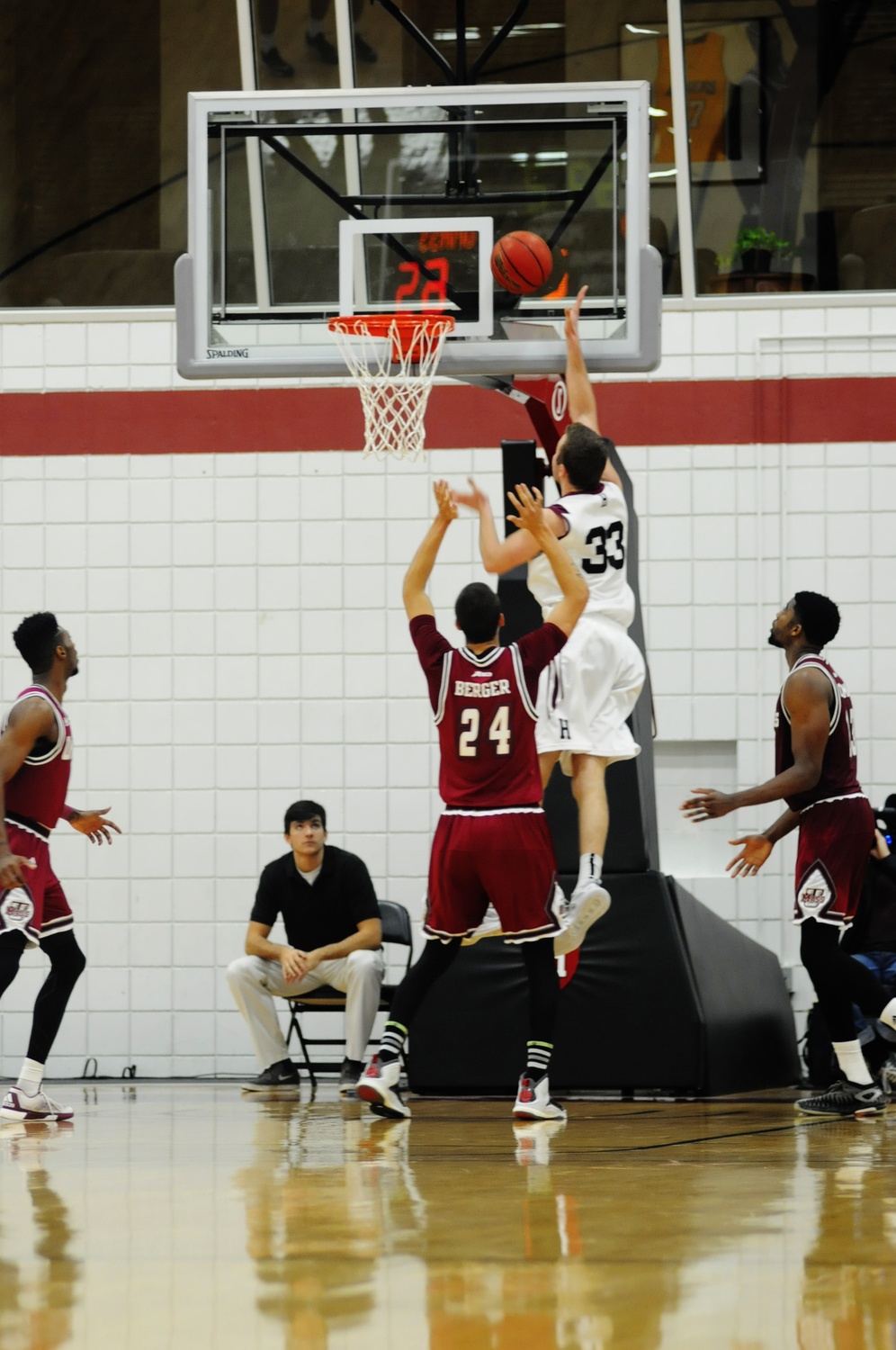 After dropping its latest conference game against Dartmouth, the Crimson will look to bounce back against the Gentlemen C's. By Eliza R. Pugh
By David Freed, Crimson Staff Writer

Heading into its first Ivy League back-to-back of the year, the Harvard men’s basketball team (9-9, 1-1 Ivy) finds itself in a familiar place.

Much like a year ago, the Crimson had an uneven showing in nonconference play—dropping winnable contests against Boston College, Holy Cross, and Vermont while playing top-10 Kansas, Oklahoma, and Providence close for 40 minutes. In both years, a sloppy win in the conference opener against Dartmouth was followed by a loss in the rematch, with the Big Green using big runs to pull away in games when the Crimson had the lead with 10 minutes to play.

With contests against Cornell (7-9, 0-2) and Columbia (13-6, 2-0) looming on Friday and Saturday, captain Evan Cummins said the team has to get back to its defensive roots. Cummins, who leads the team in blocks per game, had just one point in the 63-50 loss to the Big Green.

“It’s something we got to lock in on,” Cummins said. “It is first on our identity board and is something we have to pride ourselves on and we have to do a better job going forward to do well if we want to succeed in the Ivy League.”

The team’s defense will be given a tough test on Saturday against the Lions. Led by senior Maodo Lo, the Ivy League’s leading scorer a year ago, Columbia boasts offensive weapons at every position.

Thanks to Lo and the return of senior forward Alex Rosenberg, who gave the Crimson fits when healthy two years ago, Columbia boasts the second-highest scoring offense in the Ivy League. The Lions shoot well from three and get to the line, ranking second behind Harvard in three-point percentages and leading the league in free-throw percentage.

Harvard has a five-game winning streak over Columbia, however, due to its ability to stop the Lions’ supporting casts. In two meetings a year ago, Lo averaged 27.5 points a game on 57 percent shooting, scoring at ease against whichever defender Harvard threw at him. Yet, Harvard won both games because role players like Cory Ostekowski and Kyle Castlin (18.5 combined ppg) were held in check.

Harvard coach Tommy Amaker said that when it comes to stopping Lo, it will be a team effort. Senior Agunwa Okolie has spent time guarding speedy opposing point guards all year, from Auburn’s Kareem Canty to Providence’s Kris Dunn, and may see heavy time trying to stop Lo at the point of attack.

“There’s nothing [Lo] can’t do on the offensive end,” Amaker said. “He shoots the three, he drives it, he gets to the basket, he’s got good vision, he’s a terrific ball handler … he’s a complete player in particular on the offensive end so we’re going to need a team effort.”

In addition to boasting arguably the league’s best perimeter defender in Okolie, the Crimson’s defensive strengths match up well with Columbia’s offensive firepower. Harvard allows opponents to shoot just 39.2 percent from the field and 27.8 percent from three, both the lowest rates in the Ivy League.

A night earlier, Harvard will have their hands full with very different stylistic opponent. While Columbia has four double-digit scorers, Cornell is very top-heavy, with Robert Hatter and Matt Morgan accounting for nearly half the team’s points and assists. Daryl Smith, a junior guard who shoots 55 percent from deep, gives the team needed spacing offensively.

On the defensive end, Cornell plays a pressure defense that gives opponents fits. Cornell turns opponents over 15.4 times a game by hounding opponents on the perimeter. For Harvard, who leads the league in turnovers, it will be imperative to keep steady and get good shots. When opponents don’t turn the ball over, they shoot 44 percent against the Cornell from the field and 36 percent from deep; both numbers place Cornell in the bottom quarter of the league.

“Cornell might not be as big [as Columbia] but they certainly are quicker and more athletic, and those areas can [and] usually do make up for a lack of size,” Amaker said.

Amaker stressed that one way to attack the defense will be for his team to do a better job on the offensive glass. Dartmouth outrebounded Harvard by 13 in Hanover after being outrebounded in the first meeting, and Amaker said that he didn’t think his team “competed for 40 minutes” in the second meeting.

With the 14-game Tournament starting in earnest, the coach said it is “critical” that the team bring energy in each game the rest of the way.

“I think it is critical,” Amaker said. “Especially if we are not shooting as well, we can get second-chance opportunities so it’s an indicator of effort and energy… Whatever the numbers may be, we need to know we are playing with great energy and effort.