No End in Sight for HUDS Strike 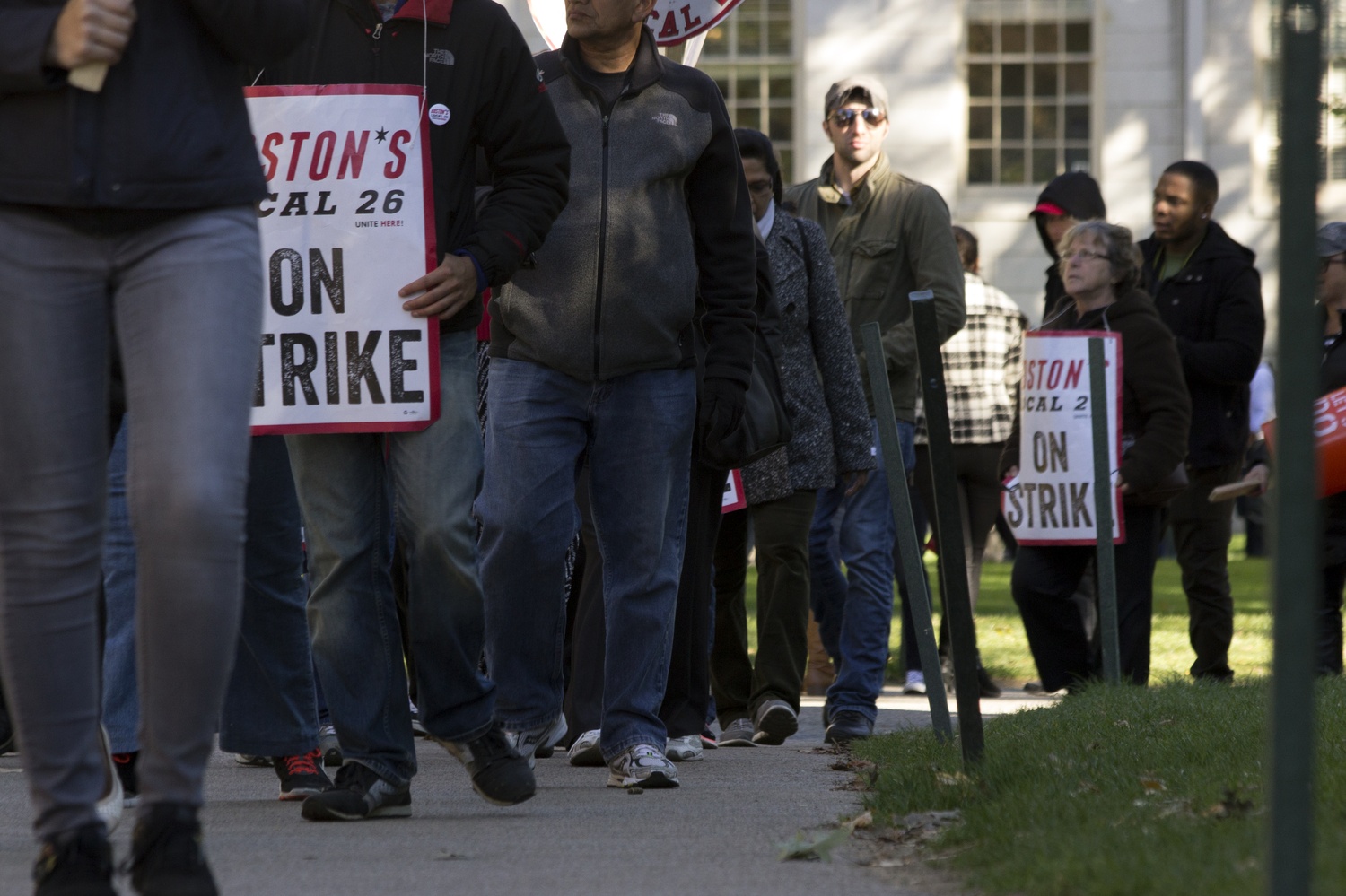 Harvard dining workers’ historic strike will likely continue throughout the rest of the week and some dining halls will remain closed, despite efforts by Harvard to assuage its dining workers’ demands on health care and wages.

“We are deeply disappointed that the union has declined to engage in a constructive dialogue,” Vice President for Human Resources Marilyn Hausammann wrote in an email to adminsitrative deans Monday detailing the latest back-and forth between the University and Local 26 in their months-long contract stalemate.

Harvard University Dining Services administration sent students an email Monday night, detailing that "HUDS managers will continue to serve students to the best of their ability for the duration of the work stoppage," set to continue into the week, and thanking students for support during "this challenging time."

Negotiators from Harvard and UNITE HERE Local 26, the Boston-based union that represents Harvard’s dining workers, met Monday for their 22nd bargaining session. The two parties have met since May, debating over health care packages and wage increases for dining services workers.

Harvard has proposed that the average rate for dining workers increase from $21.89 to $24.08. Additionally, in earlier sessions, Harvard proposed a series of summer stipends that would effectively pay dining workers who are available to work during the summer between $150 and $250 per week, regardless of whether they worked a shift during the week. The union rejected that request and, according to the email, offered a counter proposal that would increase the amount of that stipend to $450 per week.

“While any labor negotiation inevitably includes challenging issues, the university and its labor unions have always found common ground on the importance of good faith efforts to achieve a resolution that meets the needs of employees and the long-term strength of the university’s teaching and research mission,” Hausammann wrote.

Harvard’s dining workers have not seen a change in their health benefits packages since 2008, according to Hausammann, even as national health care prices have risen steadily. In 2016, two of Harvard’s unions negotiated a new health care plan that eliminates deductibles, increases copayments and introduces a new premium contribution tier for employees who make $55,000 or less annually.

At the start of the negotiations, Harvard suggested that Local 26 enroll in that same coverage, but the union rejected the offer. Towards the end of September, Harvard offered an “enhanced” version of that plan, according to Hausammann, in which Harvard would contribute 87 percent of the premium of the lowest-cost plan, as well as fund a “flexible savings account” of $80 per year in 2018 and 2019, and $40 in 2020. These proposed changes would not be implemented until 2018.

In the event that the union rejected that proposal, Harvard offered a second option, in which union members would enroll in a health care plan offered by UNITE HERE. Harvard would contribute the “equivalent cost of the Harvard University Group Health Plan enrollment premium” to that health care plan. Local 26 rejected both proposals.

Harvard then offered the union an alternative in which it would contribute $25 million over four years for HUDS workers to enroll in UNITE HERE’s health care coverage; Local 26 did not accept.

As picketing continues without any foreseeable conclusion, several upperclassmen dining halls will remain closed throughout the duration of the strike.

At press time, Local 26 spokesperson Tiffany Ten Eyck had not responded to requests for comment.

Closed dining halls include: Lowell House, Leverett House, Mather House, Adams House, Cabot House and Pforzheimer House. These dining halls have been closed since Saturday, when it became apparent Harvard and the union would not reach an agreement before the holiday weekend. Freshmen will not be allowed to eat in the Houses, though Annenberg will remain open exclusively for them.

Harvard is also operating with a fraction of its normal dining workforce, which now consists of HUDS managers, temporary employees, and volunteers from other parts of the University.

In an email sent to Lowell House residents on Monday, Faculty Dean Diana L. Eck, wrote that Harvard administrators would communicate to students about the progress of the strike and how dining halls will operate for "the rest of the week."