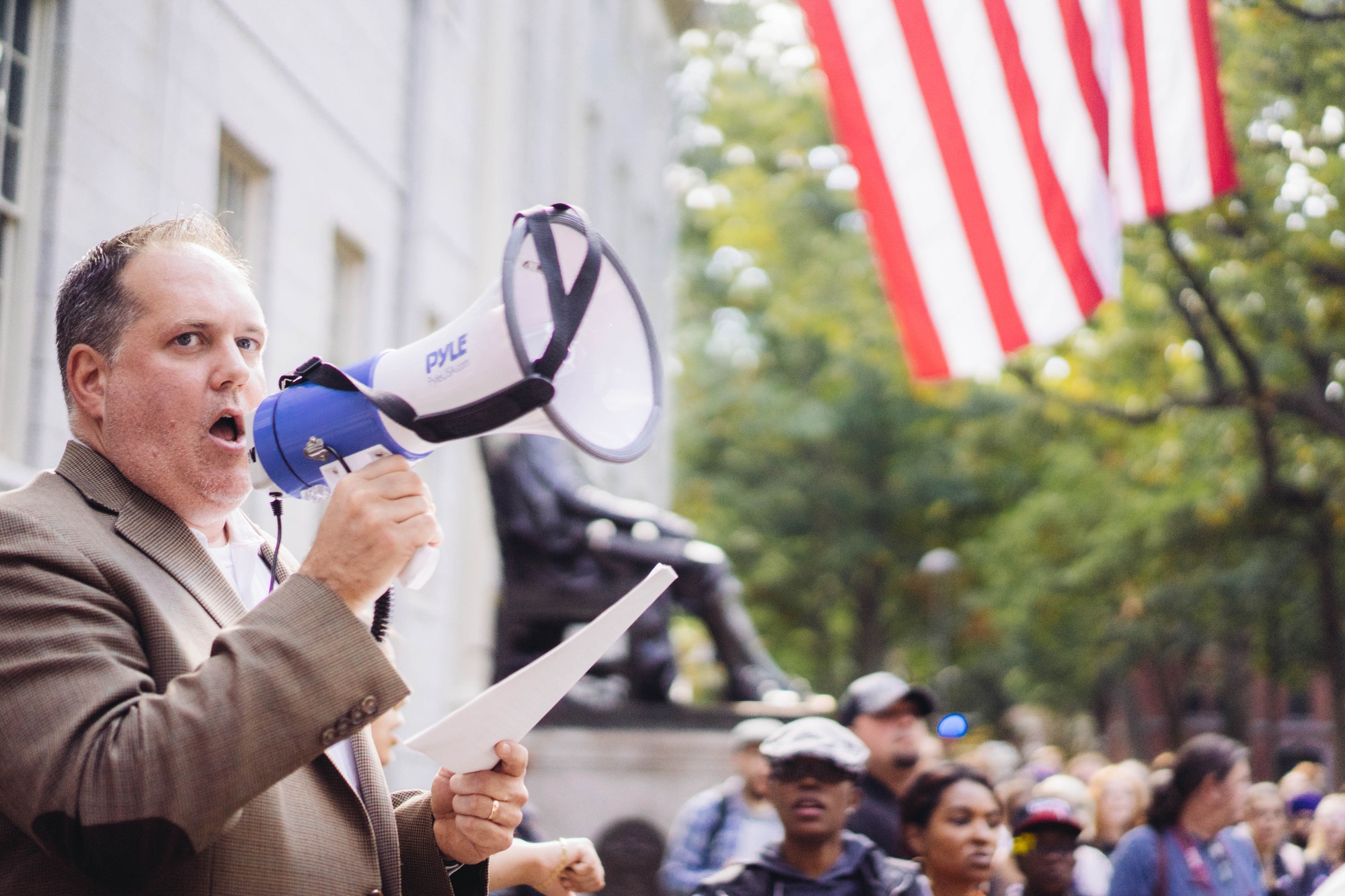 Timothy P. McCarthy, a lecturer at the Kennedy School who teaches on protest literature, walks out with members of his class.
By Leah S. Yared, Crimson Staff Writer

The historic Harvard University Dining Services employees' strike has made its way into classrooms across campus, with professors purchasing pizza to feed students and weaving discussions of the strike into course lectures.

Classics professor Richard F. Thomas, who co-authored a letter to the editor in The Crimson last week arguing the University should not ask exempt employees to volunteer to work in dining halls, said he discussed the rationale behind the letter with his students, and added that “a couple” of his students expressed their own opinions.

Thomas, who said he personally supports the strike, has also purchased pizza for students in his freshman seminar on Bob Dylan, and intends to do so for the duration of the strike.

“It’s a conundrum, the whole thing, those of us who support the union in its bargaining and therefore support the strike—we want our students to be fed and are sympathetic to the faculty deans in the houses and everyone,” Thomas said. “So yeah, helping out by bringing in pizza helps get students fed.”

Thomas, along with dozens of other professors, criticized the University in 2014 for a new health benefits packaged it extended non-union employees; at the center of the HUDs strike is Harvard's health care proposal, which HUDS's union opposes.

History professor Sidney Chalhoub, who co-signed Thomas’s letter, heard students in his course discussing the strike before class began. He said they were “clearly worried” about the workers, and that he briefly discussed with students the University’s statements that it pays dining hall workers above the industry’s average.

“If the students bring up this type of conversation during a class that has to do with the topic, and it’s a concern that they have, I don’t think it would be correct to avoid the issue because it’s a political problem at the University at the moment,” Chalhoub said.

Professor of Contemporary Arab Studies Steven Caton, who teaches a course on language and culture, wrote in an email that he recently discussed HUDS strike slogans and chants in class.

Cole V. Edick ’17, who takes Caton’s course, said he appreciated learning about the strike in the context of studying language.

“We’ve known from the beginning that the class was going to be related to politics and that we were going to be discussing rhetoric through a political lens,” Edick said. “That’s kind of the atmosphere of the course already, to have it be relevant to our world.”

Although he personally supports the strike, Chalhoub said he does not think he would bring up the topic on his own unless it closely tied in with the subject matter of his course.

Thomas added he did not think it was “appropriate” to discuss his personal opinions about the strike in class, and Caton, another letter signatory, agreed.

“I do support the strike but I've never said so in class, believing that students should arrive at their own decisions,” Caton wrote in an email.

Some professors have even brought their classes to the strike. Kennedy School lecturer Timothy P. McCarthy ’93 ventured with his students into Harvard Yard as part of the student-organized walkout for striking dining hall workers on Monday.

Students said McCarthy, who co-teaches Culture and Belief 49: “American Protest Literature from Tom Paine to Tupac” with English professor John Stauffer, told members of the class that they could join him during the walkout at 12:30 p.m., or stay and continue the lecture with Stauffer. McCarthy could not be immediately reached for comment.

Alison H. Jin ’19 said a majority of students opted to go with McCarthy. But Jin, who said she supports the strike, chose to stay behind because she enjoys the course.

“We were presented with the option whether or not we would like to go and join,”Jin said. “There was no pressure, and I thought it was a really nice way to tie in the real world into our class.”

“I’m proud to go to a school that allows for spaces where people can make their voices heard,” she added.

Jin said the strike had been brought up in the course before Monday’s walkout, calling it “very relevant to our course material.”

Faculty of Arts and Sciences Dean Michael D. Smith could not be immediately reached for comment.