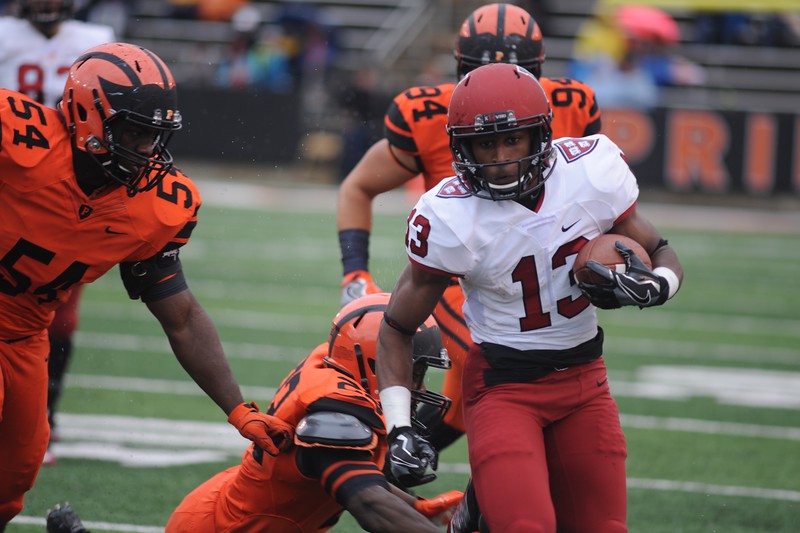 In his first game of the season, sophomore Adam Scott tallied eight catches for 85 yards, one of which went for a score in a 23-20 win over Princeton. By Matthew W DeShaw
By Sam Danello, Crimson Staff Writer

More accurately, however, the Crimson survived.

Bedeviled by injuries, facing cold and slippery conditions, Harvard took a 14-0 lead in the second quarter only to let the Tigers stage a second-half comeback and tie the score at 17-all. Overtime followed.

The victory was neither dominant nor pretty. But as much as any win in 2016, this one was gritty.

Four weeks remain. Penn and Harvard are tied for first. And still, the Crimson plays for the Ancient Eight crown.

At 5’7”, sophomore wide receiver Adam Scott is the shortest player on Harvard’s roster by nearly two inches. Against Princeton, however, he played like the largest.

A string of injuries had kept Scott out of the first five games of the season. Even as a freshman, though, the wideout had routinely won end-of-practice sprints against the rest of the offense.

Little surprise, then, that coaches rehearsed a number of plays for Scott in the week before the Tigers matchup. It was high time to release the Crimson’s secret weapon—a 5’7” speedster that no one had previously scouted.

So much for that secrecy. Scott totaled 108 yards on 11 touches, including eight grabs. His first catch came on Harvard’s first down. Running a short route by the left hash marks, he juked a defender out of his socks and zoomed 34 yards to the Princeton 17-yard line.

Five minutes into the second quarter, he gave the Crimson a 14-0 lead when he caught a ball and tiptoed down the sideline for a 24-yard score.

“That kid, he had a tough road getting here,” Viviano said. “A lot of injuries. I knew that as soon as he got his opportunity to play healthy on the field, he was going to light it up.”

Scott’s breakout fit into a larger narrative about Harvard injuries. A wave of starters has missed game action. In last weekend’s loss to Holy Cross, the Crimson was sitting not only Viviano but also starting junior running back Semar Smith and sophomore leading receiver Justice Shelton-Mosley.

All three returned against the Tigers, but only Viviano played a complete game. Smith saw a lightened workload with seven carries, allowing freshman rusher Lavance Northington to rack up 40 yards on 13 tries.

And while Shelton-Mosley grabbed six balls for 82 yards—which, for anyone else, would signal full health—he didn’t play at full speed. For the second week in a row, the sophomore conceded return duties to fellow wideout Alex LaPolice.

At the end of the first half, the Crimson led 14-0—not bad for an away contest against one-loss opponent. Even so, a distinct air of frustration pervaded the Harvard sideline.

Four times in the first half, the Crimson offense started with the ball on its own 45 yard-line or better. One of these attempts ended in a touchdown; the other three ended in a punt, on downs, and with an interception.

Especially damning was a Harvard possession with 8:57 left in the second quarter. Less than a minute ago, Scott’s score had created a two-touchdown lead. A subsequent three-and-out gave the visitors the ball on the Tigers 43 and a chance to put the game out of reach.

Instead, on the second play from scrimmage, Viviano tossed an interception. He rolled right, spotted Shelton-Mosley near the right pylon, but misdirected the ball to the trailing Princeton defensive back.

“We got a little bit greedy at times,” Harvard coach Tim Murphy said. “Joe’s an extraordinarily aggressive guy, and he’s a great football player. He’s never seen a big play that he didn’t like…. It was just a great play by their kid.”

Many of the Crimson’s early opportunities came courtesy of the Tigers’ overexcitement. Noticeably amped up during warm-ups, Princeton looked jittery in the early going, losing a fumble and an interception in the first quarter.

Eventually those nerves calmed, allowing the Tigers to come back in the matchup. But after going down 14-0, Princeton never led.