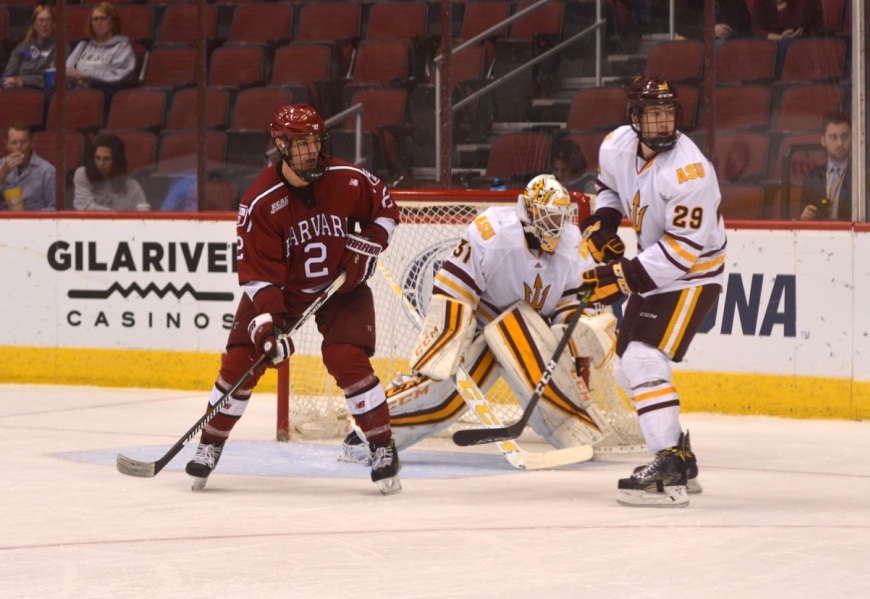 Two weeks removed from its first win over a ranked opponent, Arizona State watched the magic of Gila River Arena fizzle out against the Harvard men's hockey team Friday night. The Crimson put on a clinic in its season opener, dismantling the Division I newcomers in a 7-0 rout.

“I thought it was a good all around team effort,” Harvard coach Ted Donato ’91 said. “I thought we got contributions up and down the lineup.”

Yet for the first 15 minutes, the Crimson (1-0-0) hardly resembled a Goliath. To quote a famous speech that happened right next door—that of former Arizona Cardinals coach Dennis Green—the Crimson initially looked like “what we thought they were”—a team seeking to shake off both an offseason of rust and 'the travel legs,' in the words of Coach Donato.

But against an outmatched opponent, Harvard made the leap from stagnant to stellar in the blink of an eye. With just over three minutes remaining in the first, Esposito delivered a pass in stride to Moy on his right, and with one sweeping move to his backhand, the Nashville Predators prospect gave the Crimson life.

Less than two minutes later, Moy sent Harvard into the locker room feeling even better, as his feed to sophomore forward Lewis Zerter-Gossage produced the Crimson’s second conversion of the contest.

The intermission could only slow the bleeding. Harvard tacked on another three goals in the middle frame, including a Moy one-timer in front of freshman netminder Joey Daccord’s right post. Esposito spotted Moy all alone and threaded an impressive back-handed pass through the slot, giving both parties their third point of the night.

“Esposito had two great feeds for me,” Moy said. “I just had the easy job of putting them in.”

Esposito wasn’t solely passing either. The senior knotted his first goal of the year standing atop the goalmouth at the 5:10 mark of the second period after punching home a Sean Malone shot attempt. 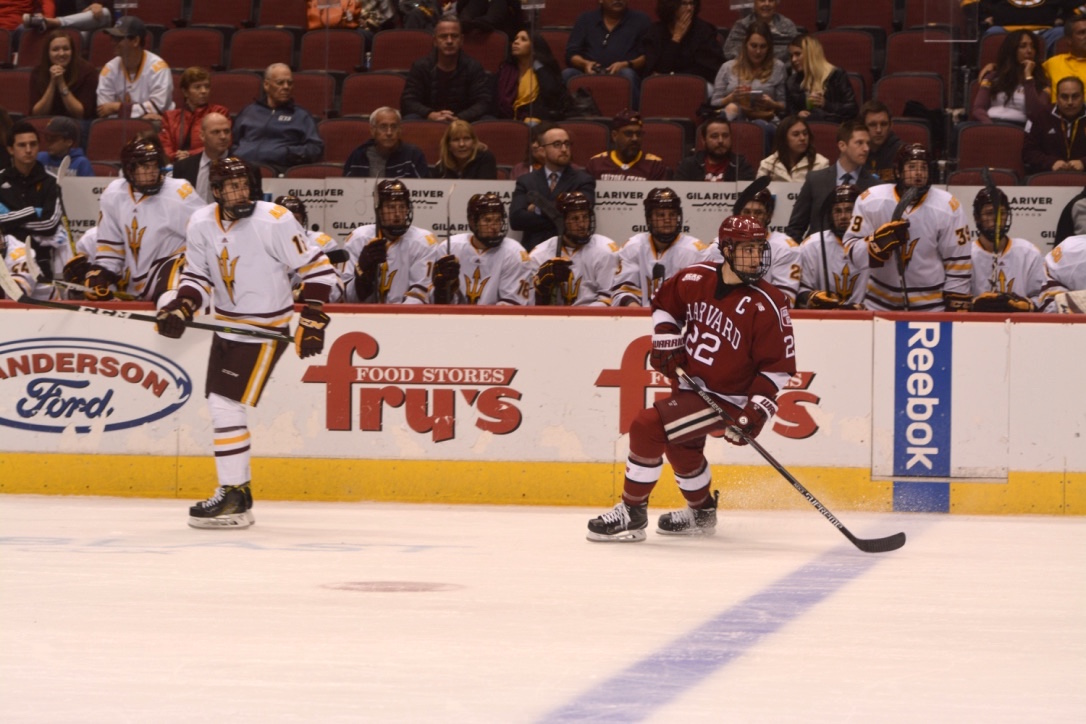 Senior forward Devin Tringale's captaincy kicked off with a win on Friday. By Jake Meagher

Friday night also marked the first opportunity for Harvard’s new top line to take the ice as a unit. And each of the two new wings stepping in beside co-captain Alexander Kerfoot had himself a day.

After Zerter-Gossage was the first member of the trio to find the netting, Ryan Donato followed suit. The sophomore from Scituate bested both Sun Devil goaltenders that took the ice Friday, as his shorthanded wrister beat Daccord in the second and his practically accidental rebound attempt squeaked past Ryland Pashovitz in the third.

Had Donato not been robbed twice on the doorstep minutes before he converted his wrister, the sophomore might have logged his second career hat trick. Dancing around the goal, Donato used his quick hands to produce a shot at two open nets but just couldn’t find the space to slot one through.

“I was laughing with Kerf on the bench,” Donato said. “That one goes in—the muffin I shot, but the other two somehow stayed out.”

Freshman defenseman John Marino—an Edmonton Oilers draft pick—capped the scoring while shorthanded with 2:29 remaining in the contest, knocking home a feed through the crease from fellow freshman Nathan Krusko. The Crimson’s other highly touted new defenseman also logged his first career point on Friday, as Adam Fox—a Calgary Flames prospect—picked up an assist on Zerter-Gossage’s goal in the first.

Harvard has now opened the season with a 7-0 road win in two consecutive years, as the Crimson campaign opened with a demolition of Dartmouth in 2015.

One common denominator has been Merrick Madsen, who was responsible for the shutout in both contests. A man of the west himself, the junior netminder made 23 saves Friday to earn his first clean sheet of the year.

“I thought Merrick was excellent,” Ted Donato said. “I think sometimes when the final score is 7-0, you don’t think about the goalie as much, but I think he made some really key saves early in the game that kept them at zero and allowed us to kind of get on track.”

The two sides will face off again tomorrow night at a much smaller venue—Oceanside Ice Arena. And despite Friday’s rout, Ted Donato expects "a different game."

“They have a lot of pride in that room, and they’ll be much better," Donato said. "And hopefully we’ll come out with a good effort tomorrow night.”