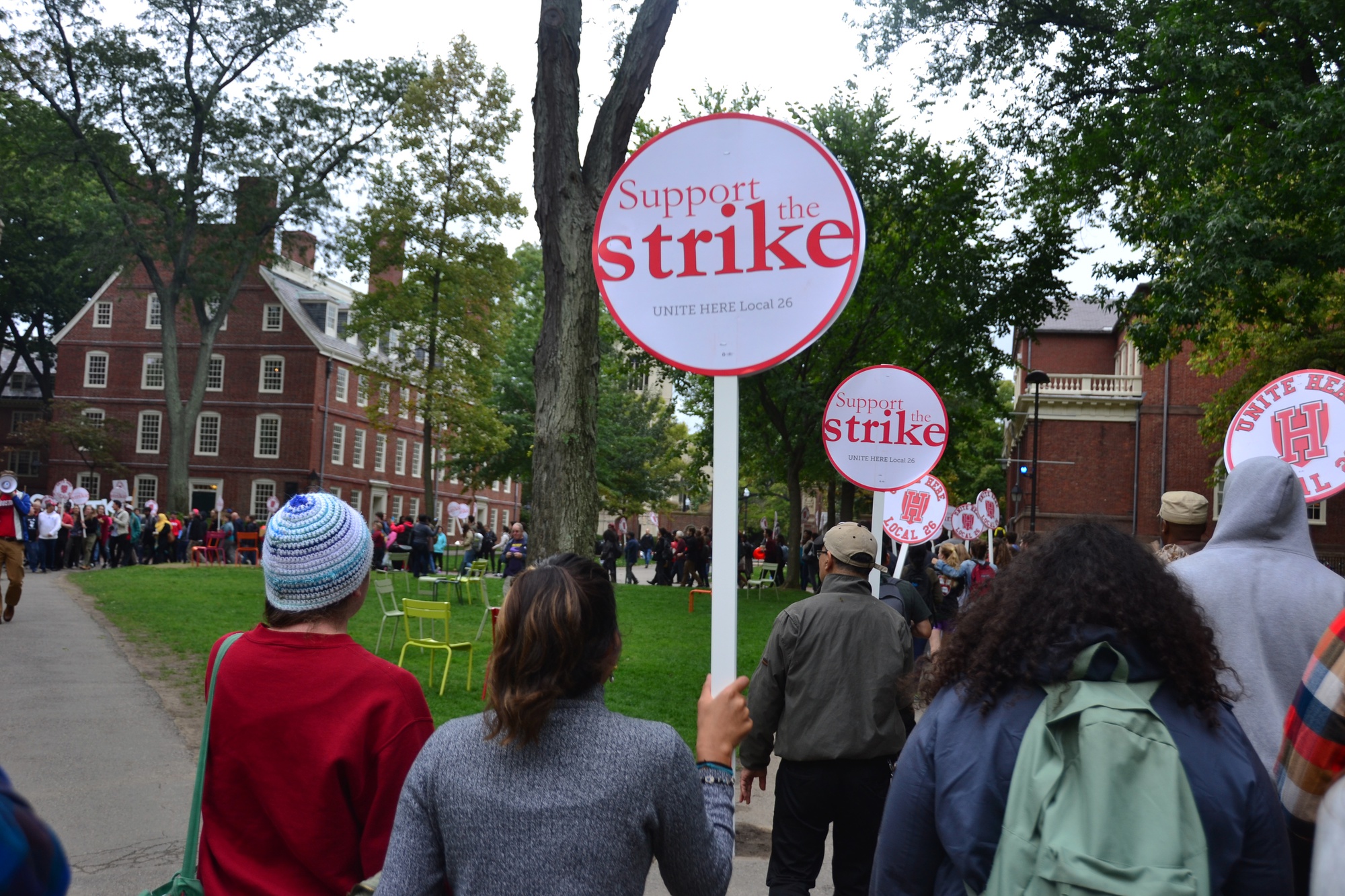 After another fruitless bargaining session between Harvard and its dining service workers, a strike seems imminent.

“Things are not going well,” Brian Lang, the president of UNITE HERE Local 26—the Boston-based union that represents the dining workers—said in an interview Monday night. He added that he is not optimistic that a settlement will be reached at the final scheduled negotiation session on Tuesday, the last chance the parties have to avert a strike.

At the 18th bargaining session Monday, Harvard made a series of new offers to the HUDS bargaining unit, including paid summer stipends for workers and a new health care option for employees who make less than $55,000. Local 26 rejected all offers. 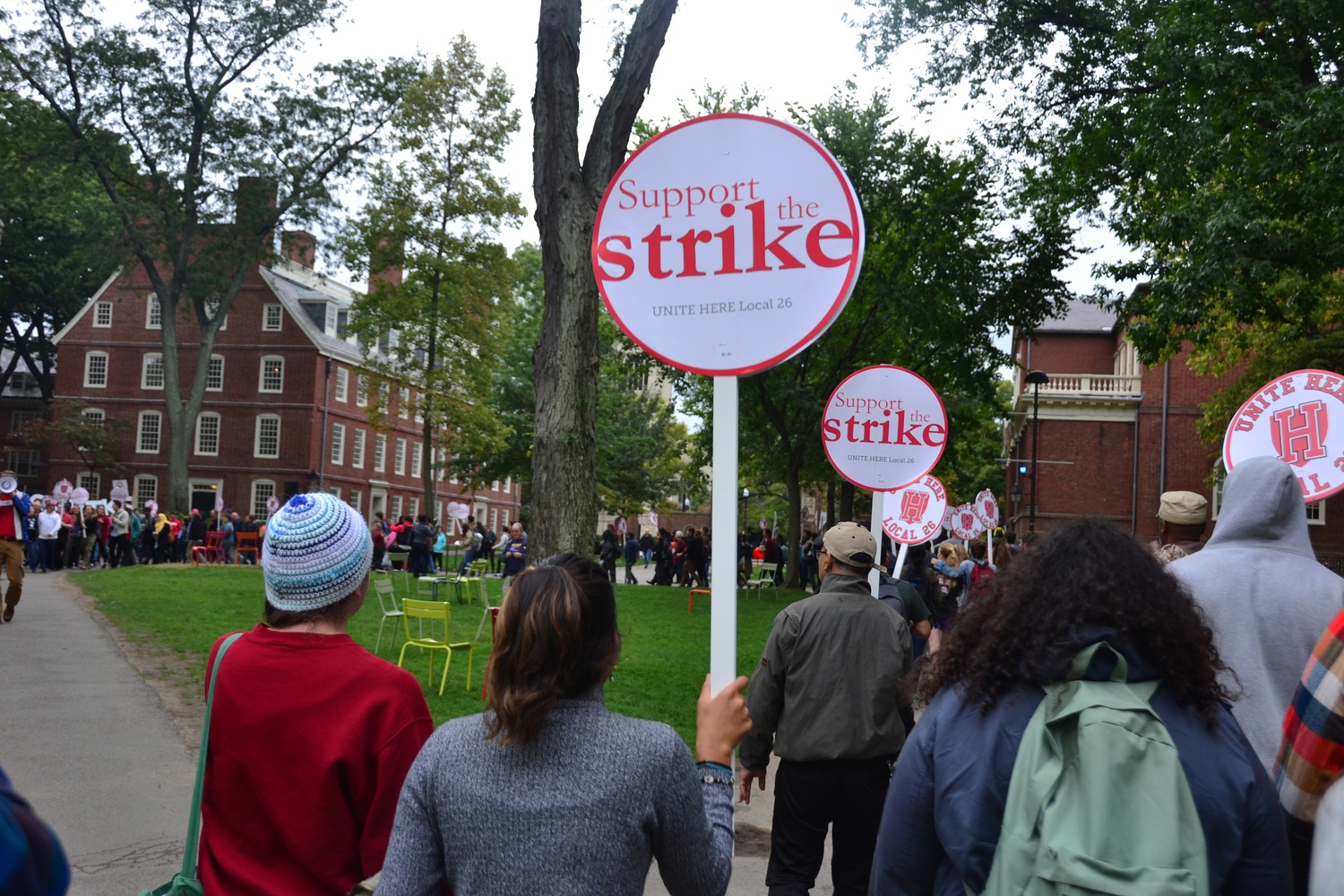 Harvard and HUDS have been bargaining for nearly four months, a process protracted by fervent debates over the union’s health care plan and wages. Last Friday, Local 26 announced that the union would strike this Wednesday if a contract settlement was not reached by midnight Tuesday.

Marilyn Hausammann, the University’s vice president of human resources, outlined a “further enhanced” proposal that Harvard’s bargaining unit put on the table Monday to address union concerns, according to an email she sent to Harvard administrative deans. A federal mediator was present to facilitate the talks.

The University’s new proposal offers “summer stipends” to directly address a union demand that HUDS workers be provided with year-round work. According to the email, Harvard would pay dining staff who are available to work during the summer anywhere between $150 to $250 per week, “even if there are no open shifts,” depending how long the University has employed a worker.

Harvard’s dining workers do not work during the University’s recesses, a point of debate during this round of contract talks. According to Local 26 spokesperson Tiffany Ten Eyck, HUDS has demanded that Harvard provide year-round work to interested employees and institute a “$35,000 minimum guaranteed salary” for those employees.

In addition to the summer stipends, Harvard extended two health care options to the union on Monday. The first would create a premium contribution tier for workers earning $55,000 or less annually in which Harvard would contribute 87 percent of the premium of the lowest-cost plan, as well as fund a “flexible savings account” of $80 per year in 2018 and 2019, and $40 in 2020. These proposed changes would not be implemented until 2018, according to the email.

In the second new health care option, the University would contribute the “equivalent cost of the Harvard University Group Health Plan enrollment premium” to a health insurance plan offered by Local 26. According to Hausammann, approximately 300 dining workers are currently enrolled in that coverage.

The average salary of a dining worker, according to the University, is about $34,000. Data from the Bureau of Labor Statistics—a federal organization that aggregates labor data per profession—from May 2015 indicates that the annual mean wage for food preparation and serving-related occupations in the Boston metropolitan area was $27,690.

When asked what proposals the union had raised at the session on Monday, Lang declined to comment beyond acknowledging that “concepts” had been “kicked around.” Lang criticized the University for being “disingenuous” in its negotiation tactics.

Thus far, union officials have not described in detail the proposals they have put on the bargaining table with regards to health care. They have stated they do not want their workers to pay any more out-of-pocket expenses for health care.

With the deadline for a strike set for midnight Tuesday, the union has already begun preparing to picket.

In a press release Monday afternoon, Ten Eyck detailed a series of preparations HUDS workers will make for the strike.

“On Tuesday afternoon, workers will assemble hundreds of picket signs, review strike assignments, and load strike supplies into four 29-foot RVs that will serve as a mobile Strike Headquarters,” Ten Eyck wrote. “If a settlement is not reached, pickets will go up at 16 locations on Wednesday.”