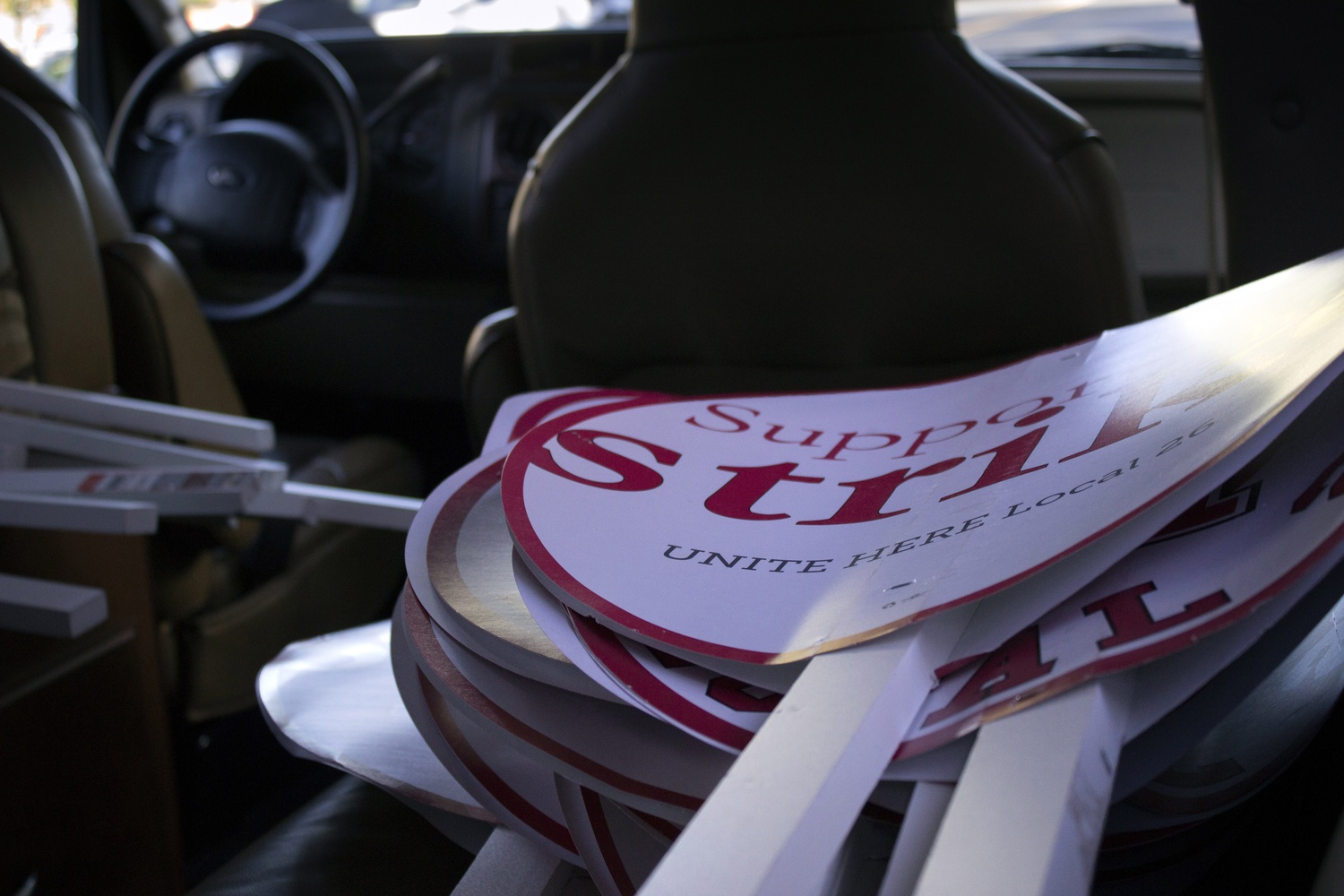 Facing its first instance in history of a dining service workers strike during the academic year, Harvard announced Tuesday its plans for maintaining order in the dining halls as its workers take to the picket lines to strike for a new contract.

Addressing undergraduates in an email, Dean of Students Katherine G. O’Dair outlined the University’s contingency plan for a strike—set to start at breakfast on Wednesday morning. According to O’Dair, Harvard’s dining halls will operate with extended meal hours, though three locations—Cabot, Dunster, and Kirkland Houses—will see suspended operations during the duration of the strike.

Harvard’s dining hall workers announced Tuesday afternoon—nearly six hours before the deadline their union set for reaching a contract settlement—that they will strike Wednesday morning, starting at 6 a.m. Workers will picket at 16 different locations around Harvard’s campus, including all of the College’s House dining halls.

With the extended hours, breakfast will run from 7 a.m. to 11 a.m., lunch from 11:30 a.m. to 3 p.m., and dinner from 4:30 p.m. to 8 p.m. Other dining hall services, like brain break and FlyBy—a grab-and-go dining service the College offers to undergraduates—will continue to be offered, though FlyBy will be expanded to include freshmen. However, Harvard students will not be able to order packaged, to-go meals, and “any packouts that have already been coordinated with a dining hall manager will be cancelled during the strike period,” according to O’Dair’s email. 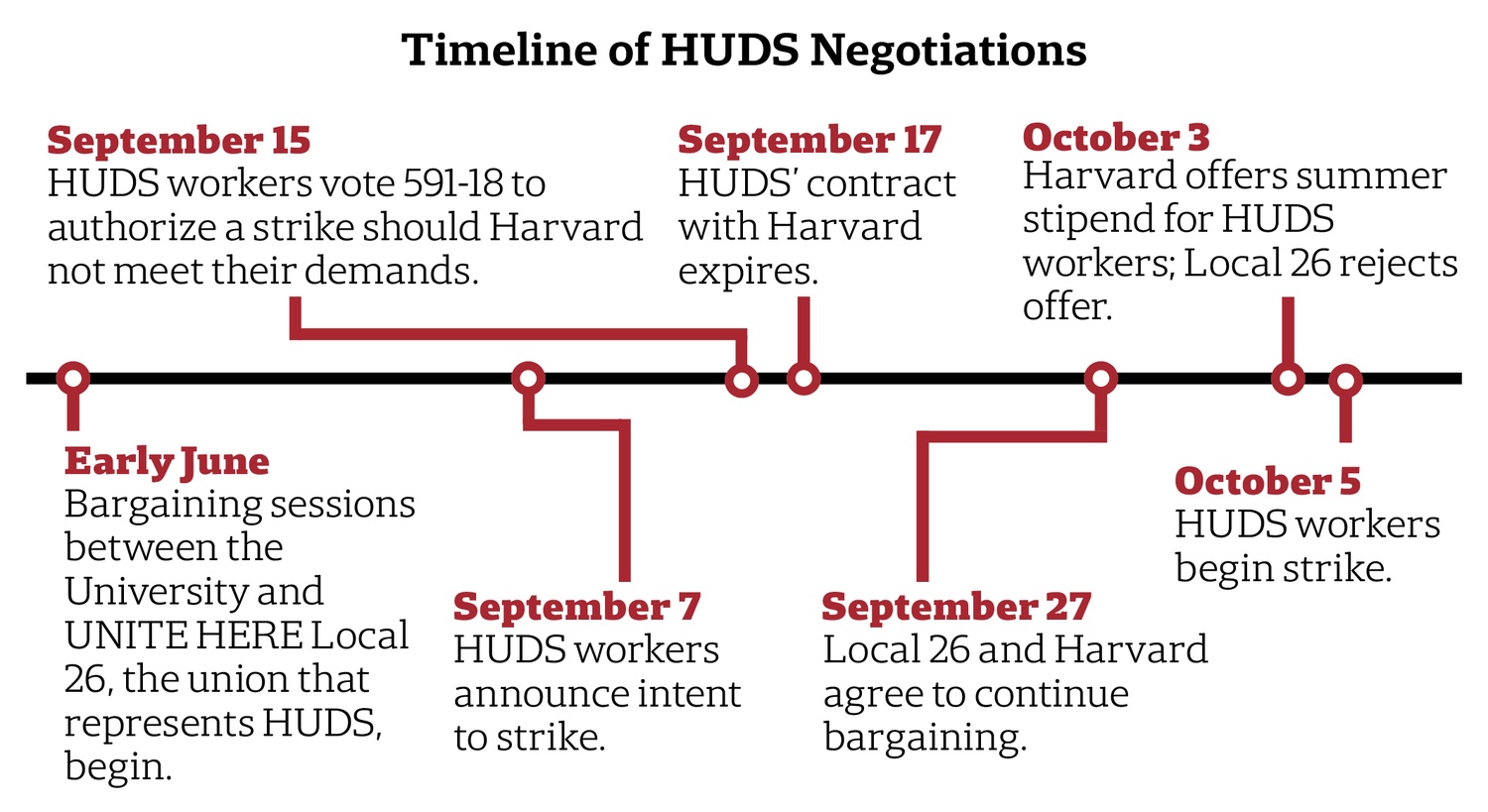 With HUDS workers absent from their posts on Wednesday, dining hall managers will primarily take the reins, the Pforzheimer and Currier House Faculty Deans wrote in emails to the students in their house. Managers are not members of the dining workers’ union.

In an email message sent to various House lists describing the “do’s” and “don’ts” of the strike, members of the Student Labor Action Movement, an undergraduate activist group, urged students to refrain from eating in cafes normally staffed by HUDS workers, as well as asked student workers in those cafes to not pick up additional shifts normally reserved for HUDS workers.

But as Harvard was preparing to offset the potentially negative effects of the union’s actions, the dining service workers were preparing their own materials for the strike. On Garden street Tuesday, the workers—and their supporters—made picket signs and acquired four RVs that the union said will serve as “mobile strike centers” during the course of the strike.

O’Dair acknowledged the effect the service disruption may have on the many students currently in the throes of midterm season.

“I know that many of you have midterm exams in addition to other commitments and are concerned about the impact of a possible strike on your schedules and dining options,” O’Dair wrote. “I urge you to prepare for tomorrow by giving yourself extra time to get your meals and to get to class.”

Tuesday morning, when the strike was still not certain, Harvard dining halls made the switch from metal utensils and ceramic dishes to plastic items. When asked about the change, HUDS spokesperson Crista Martin did not respond to requests for comment.

In the weeks leading up to strike, speculation abounded about what sort of food Harvard would serve in the absence of its regular cooks. If Harvard chose the route Yale College took when their dining workers went on strike several years ago, it may have elected to provide undergraduates with vouchers for restaurants in Harvard Square. However, nine dining workers from across the campus said they had seen unusually large quantities of frozen food being brought into the dining halls ahead of what was then a potential strike.