Offense Gives Football a Jolt in Win Over Dartmouth 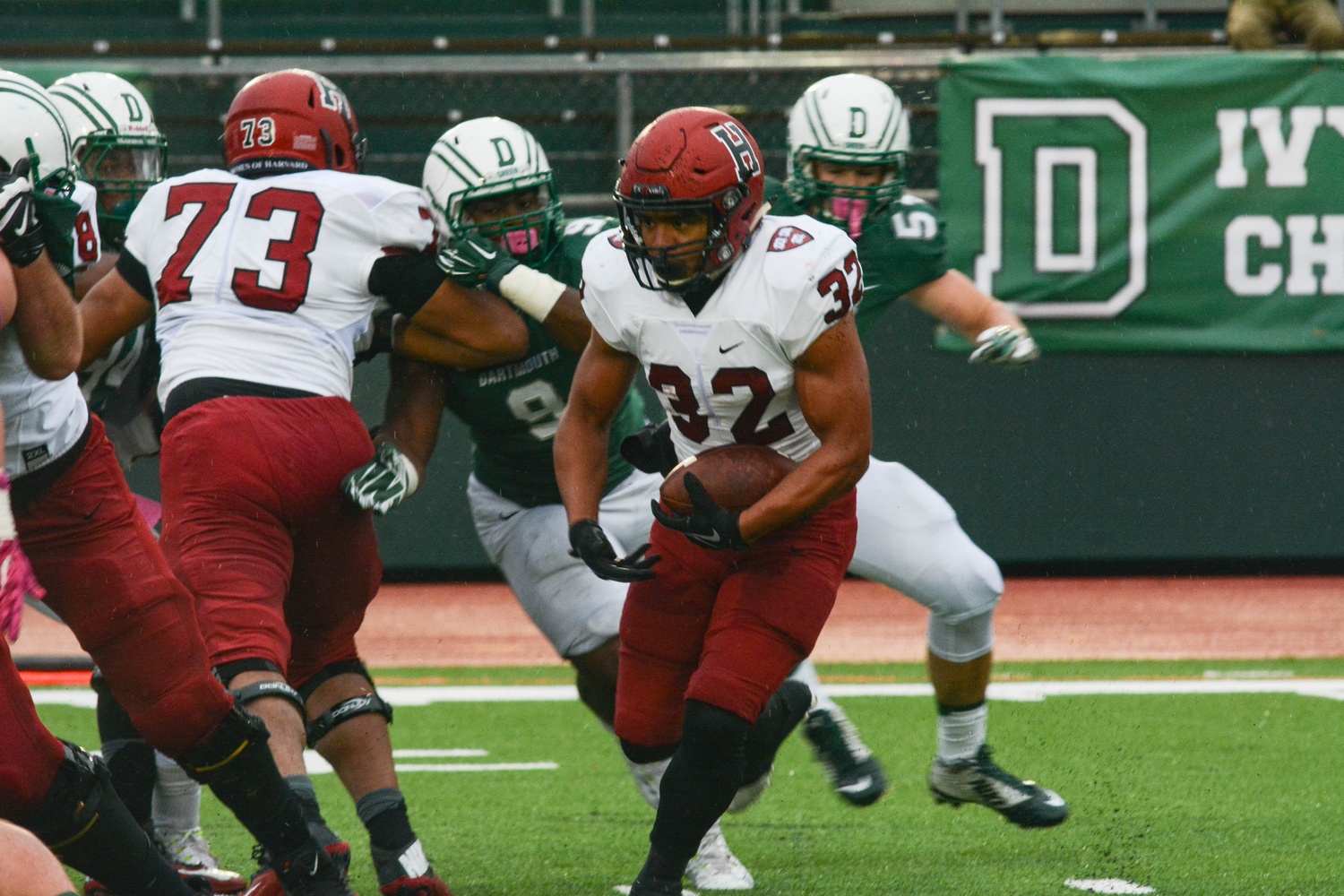 Junior running back Semar Smith, shown here in Harvard's 23-21 win over Dartmouth, leads all Harvard backs with seven touchdowns. He had 44 yards and a touchdown on 12 carries on Saturday. By Y. Kit Wu
By Jack Stockless, Crimson Staff Writer

Fog hung over the nearby White Mountains, and the temperature hovered just above 40 degrees as rain started to steadily cascade down onto Memorial Field in Hanover, N.H.

These conditions, paired with the memory of a gritty 14-13 showdown between Harvard and Dartmouth a year ago, pointed toward a similarly low-scoring game.

However, in a matchup that seemed destined to be defined by defense, both teams’ offensive attacks shone through as the deciding factors in the Crimson’s 23-21 triumph over the Big Green.

Harvard recorded 206 yards through the air to go along with 199 yards on the ground. However, the offense was slightly more run-heavy than the yardage would make it seem. The Crimson ran the ball 48 times and threw the other 30 plays.

“Obviously, we balanced the offense today,” Murphy said. “Being able to run the football obviously takes the pressure off the passing game.”

The balanced offense seemed to work well, especially with a solid performance from the offensive line. Senior quarterback Joe Viviano was not sacked once, and he had ample time in the pocket to find his receivers or decide to keep the ball and pick up yards on the ground. Viviano was intercepted once, but this was Harvard’s only turnover.

A TALE OF TWO QUARTERBACKS

The Big Green has played like two completely different teams in conference and nonconference play this year.

It is an understatement to say that Dartmouth has struggled against its Ancient Eight counterparts, as it has yet to win an Ivy League game in four attempts.

In three nonconference contests, the Big Green is undefeated and has outscored its opponents, 77-48. These wins include a 35-10 rout of a Holy Cross team that beat Harvard and a 22-21 victory over No. 22 New Hampshire.

“I’m just a small part of Dartmouth football, so I need to listen to what our decisions are and do my best in whatever role that may be,” Heneghan said. “It was frustrating, but I looked at it as another chance for me to keep growing.”

However, Dixon IV struggled early, throwing an interception on his first pass attempt. He finished with only one completion in six tries.

“He didn’t miss a beat, and he and a lot of other guys gave them an opportunity to win the football game,” Murphy said. “They seemed at times to move the ball effortlessly with their controlled horizontal passing game.”

For the first five games of 2016, senior tight end Anthony Firkser was one of the few constants for the Harvard offense. Firkser averaged 99.8 receiving yards per game in the first half of the season, and he scored five touchdowns. In two games since, he has only caught four passes for 29 yards and one touchdown.

At the midpoint of the season, Murphy was possibly wary of Princeton and Dartmouth constructing defensive game plans to curtail Firkser, so he enlisted his other offensive weapons in these games.

Firkser’s lone catch in the Dartmouth game was a seven-yard gain to pick up a first down on the final drive of the game. For most of the day, the Manalapan, N.J. native was utilized for pass protection and as a decoy so the Big Green could not impose double coverage on Shelton-Mosley.

“We thought we’d get more opportunities to throw him the football, but we didn’t necessarily get the looks we thought we’d get,” Murphy said. “On the last play of the game, I said, ‘Anthony, that’s it for you at wide. You’re going back to H.’”

While Firkser has seen his targets decrease in recent weeks, Shelton-Mosley has trended in the opposite direction.

After sitting out of the Holy Cross loss, the second-year receiver has reintegrated himself into the offense the past two games with 159 yards on 12 receptions. Shelton-Mosley also scored his first touchdown of the season against Dartmouth. He tallied six his freshman year.

On the first play of the second half, Viviano connected with Shelton-Mosley on a short toss to the right side. The second-year wideout snagged the pass, cut hard to his left to evade a defender, and sprinted up the sideline before being pushed out of bounds.

This 39-yard gain was emblematic of how Shelton-Mosley can change this Harvard offense. Though Murphy has other options at wide receiver, such as senior Joey Foster and sophomore Brian Dunlap, Shelton-Mosley’s extraordinary athleticism allows him to extend plays after the catch further than the average Ivy League receiver.