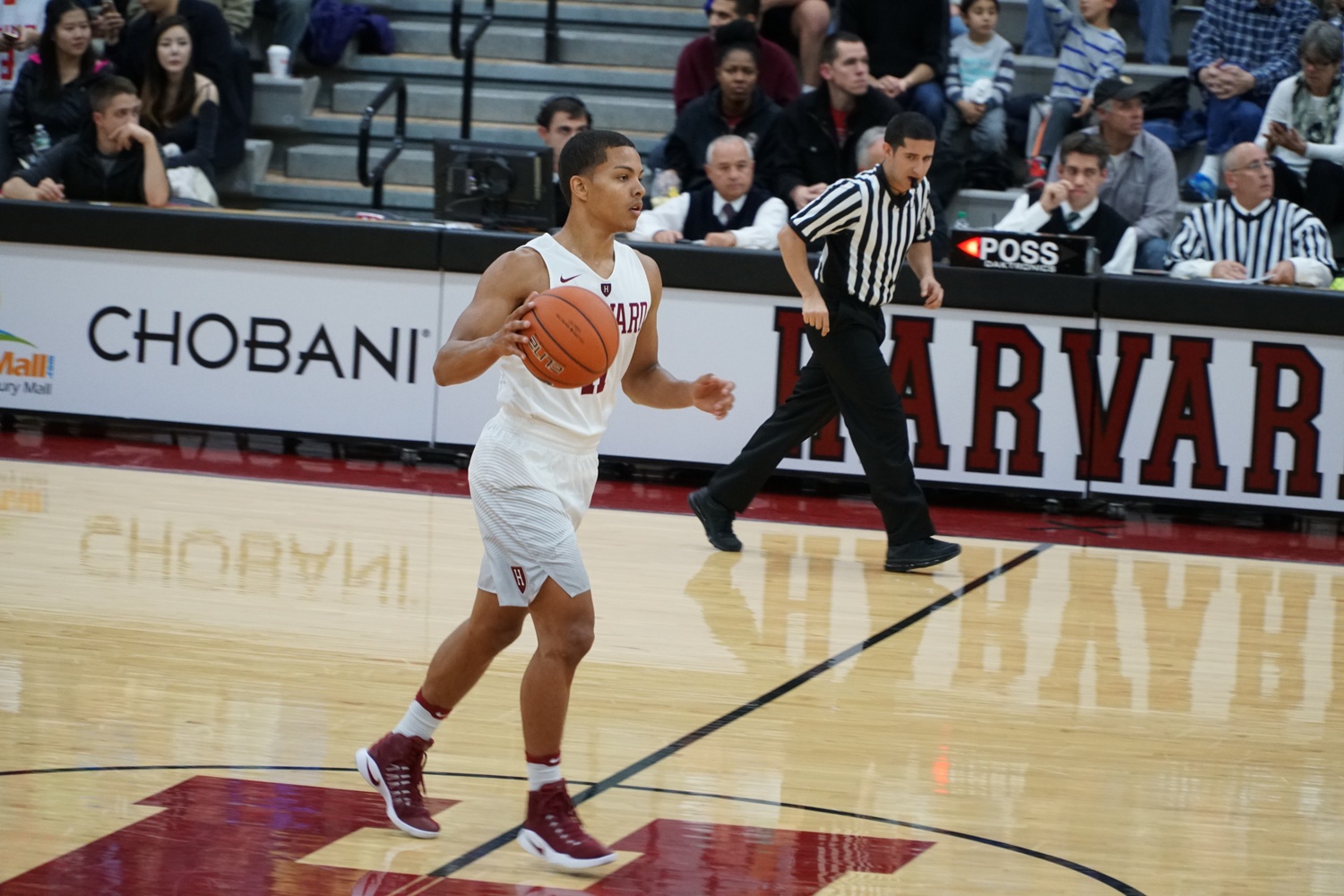 In a season-opening exhibition against MIT, freshman point guard Bryce Aiken came off the bench to lead all scorers with 17 points. By Ryosuke Takashima
By Stephen J. Gleason, Crimson Staff Writer

If it’s not about the size of the dog in the fight, then no one told this year’s Harvard men’s basketball team. On Thursday night at Lavietes Pavilion, the Crimson capitalized on its size advantage to down Massachusetts Institute of Technology, 78-63. In what felt like a road game for Harvard, the Crimson started four players 6’5” or taller and rode the major height advantage to disrupt passing lanes and force 28 MIT turnovers.

The success on the offensive end was just what the doctor ordered to start the season following a 2015-2016 campaign in which the Crimson often struggled to find its scoring touch. Harvard’s freshmen showed promise, while its returners lent steady hands in limited action.

“Playing a lot of young guys, it’s fun to see where they are and we’ll see where we can progress and continue to grow,” Harvard coach Tommy Amaker said. “But it’s good for us to go against a team like this that’s pretty darn disciplined.”

Junior forward Chris Egi, starting in place of the inactive Zena Edosomwan, provided an exclamation point to begin the contest. Egi corralled a steal on the defensive end, dribbled the length of the floor, evaded an MIT defender, and threw down an emphatic two-handed dunk to put Harvard up 7-5. The Engineers never got closer.

The Markham, Ont. native could be an X-factor for the Crimson this season. A top recruit coming out of high school, Egi averaged 11.5 minutes per game last season but was a non-factor on the offensive end and struggled at the free throw line. However, if Egi can carve out a role in the crowded Crimson frontcourt, he could have a breakout season similar to the one Edosomwan had last season. His size (6’9”, 220) was on display against MIT, as the junior finished with 10 points and six rebounds in 22 minutes.

“I just thought he did a terrific job in a lot of ways for us, giving us energy, playing with a high motor,” Amaker said. “I think playing as a junior, being an experienced guy, that can help some of the younger players. I just thought seeing Chris develop as he has is very encouraging.”

Harvard got off to a hot start and jumped out to a 24-13 lead. Toward the end of the first half, the Crimson struggled to stop MIT, and the Engineers got the game to within six at halftime. As Amaker tinkered with different lineups, MIT was able to keep the game competitive but never got closer than seven in the second half. For the game, the visitors shot 46 percent from the field, but the high percentage was largely negated by 13 Harvard steals.

Harvard’s highly touted freshman class was thrown into the fire immediately on Thursday. All seven members saw action, with point guard Bryce Aiken flanking co-captain Siyani Chambers for much of the night, leading all scorers with 17 points.

“It’s been awesome,” Aiken said. “We’re both interchangeable. If he gets the ball out, I’ll gladly run the wing and vice versa. I think we’re very effective when we play together.”

Seth Towns, Robert Baker, and Chris Lewis all cracked the starting lineup and combined for 21 points and nine rebounds. Rookie Christian Juzang played 27 minutes and chipped in 14 points on the wing for the Crimson.

Both teams struggled with turnovers throughout the contest. The Engineers conceded 41 points off turnovers to make Harvard’s 11 turnovers look like small potatoes. Although the offense wasn’t always pretty, it was drastically different from the grind-it-out, slow-paced, half-court game that was the norm for Harvard last season.

The change was evident from the tip, as Amaker decided to start freshman Towns, a wing who is not afraid to penetrate defenses and let his jumper fly. Less than 10 minutes into play, the first-year converted an and-one reverse layup that brought the home crowd to its feet.

Chambers, one of the few Harvard members of the team’s expected core who logged major minutes on Thursday, was the workhorse that Harvard fans are used to seeing. The senior hit the deck early and often but showed no ill effects from the ACL injury that caused him to miss last season. In his first organized game in more than 18 months, Chambers had nine points and four assists, quarterbacking lineups almost exclusively made up of players with which he has never seen game action.

“I’m just very blessed to be back out here and play the game that I love,” Chambers said. “It felt really good to be back out there with my teammates and getting our first win.”

Co-captain Corbin Miller and junior Andre Chatfield did not enter the game, and sophomores Tommy McCarthy and Weisner Perez only logged a combined five minutes.

—Staff writer Steven J. Gleason can be reached at stephen.gleason@thecrimson.com.