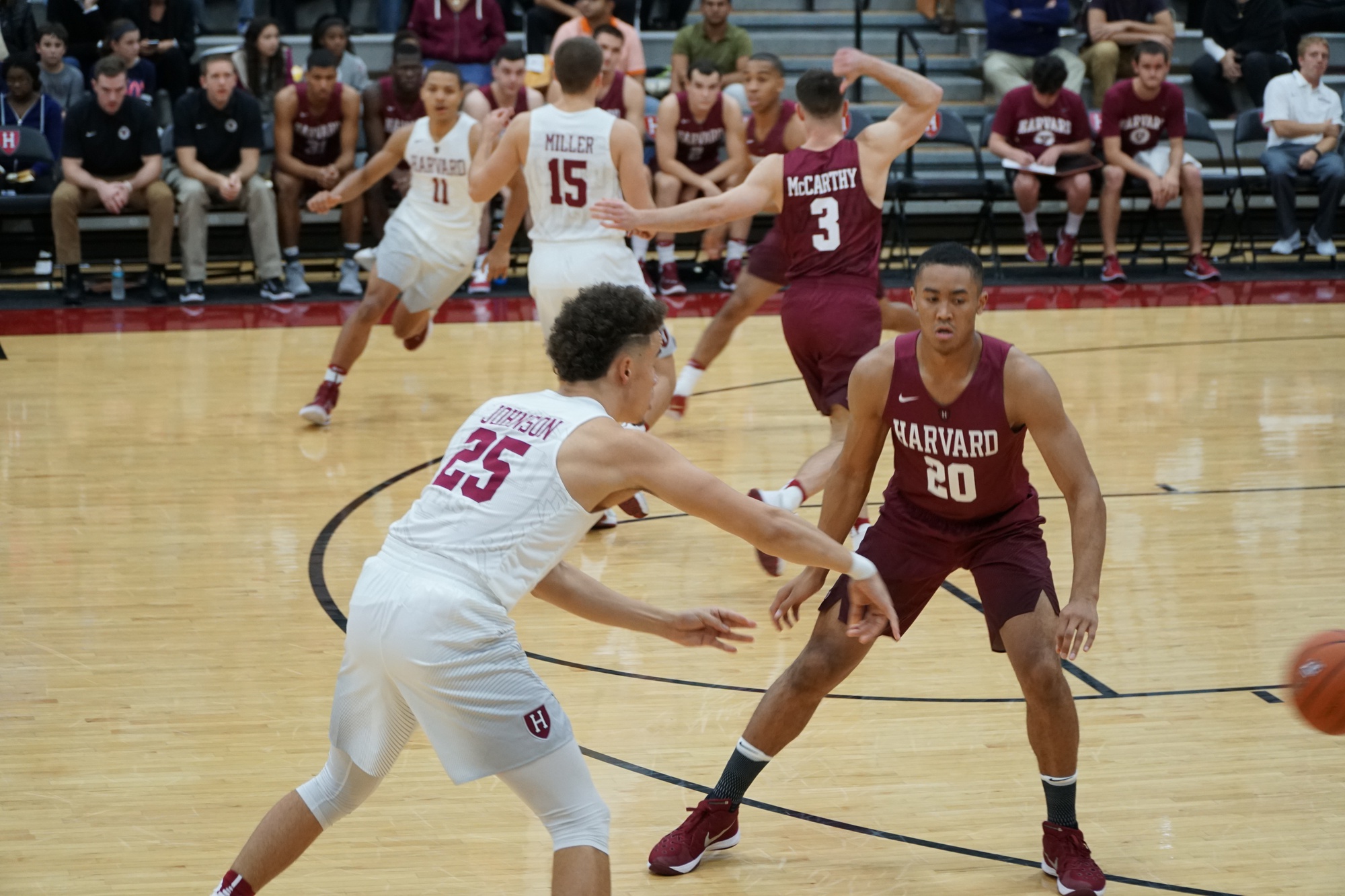 Harvard’s 2016 recruiting class ranked No. 10 in the nation, a historic accomplishment for the Ivy League University. The Crimson was ahead of every single 2016 Final Four team and six of the eight Elite Eight teams—trailing only Kansas and Virginia. David Freed profiles each of the seven members of the class before they step on the floor for the season opener against Stanford, covering their recruiting process, playing style, and potential fit on this year’s team. In this one, he covers small forward Justin Bassey.

Justin Bassey, #20 above, will battle with classmate Seth Towns and junior Andre Chatfield for playing time. By Courtesy of Harvard Athletic Communications

Justin Bassey joined the team early in the recruiting process, coming in scarcely two months after fellow recruit Chris Lewis. His commitment came on the heels of Harvard’s NCAA Tournament loss to the UNC Tar Heels. According to USAToday, he was also considering Gonzaga and Vanderbilt when he made the decision.

Like many recruits, Bassey made the decision with education in mind. His two parents, who have six graduate degrees between them, put a heavy stress on academics and his father Morgan commented to USAToday that “education was everything for us.”

Bassey has a retro game for a combo guard. He is above-average size for the position at 6’5” and uses that to attack the rim relentlessly. On highlight tapes here and here we can watch Bassey attacking the rim with aplomb, finishing around or above multiple defenders. He is adept with using both hands and runs the floor hard on every possession.

One thing that we do not see in either highlight tape is the outside shot. That said, Bassey is more than proficient from behind the arc, having made more than 40 percent of his attempts as a junior and senior while taking nearly six threes a game. However, his free throw percentage was disappointing (he made under 60 percent his senior year) and there remain questions about how his shooting will hold up at the collegiate level.

Bassey has an uncertain future in the Crimson rotation. His best skill—attacking the rim—was in high demand for the Crimson this year, who only had three perimeter players (sophomore Tommy McCarthy and seniors Patrick Steeves and Agunwa Okolie) who could do so with any sort of consistency. With Steeves and Okolie graduating, the Crimson will have a need for a slashing wing.

The problem is that fellow freshman Seth Towns looks to be more of that player than Bassey is. Towns has a better shot than Bassey, which will make it hard for the Aurora, Colorado native to see the floor. Junior Andre Chatfield, a defensive ace for the Crimson who lacks a solid set of offensive tools, will provide a different look and should rep substantial minutes at the position.

Overall, I expect Chatfield and Towns to duel for the starting small forward spot and for Harvard coach Tommy Amaker to play matchups as needed. Bassey will likely compete to get minutes behind those two and will have more success getting on the floor if he can refine his three-point shot.