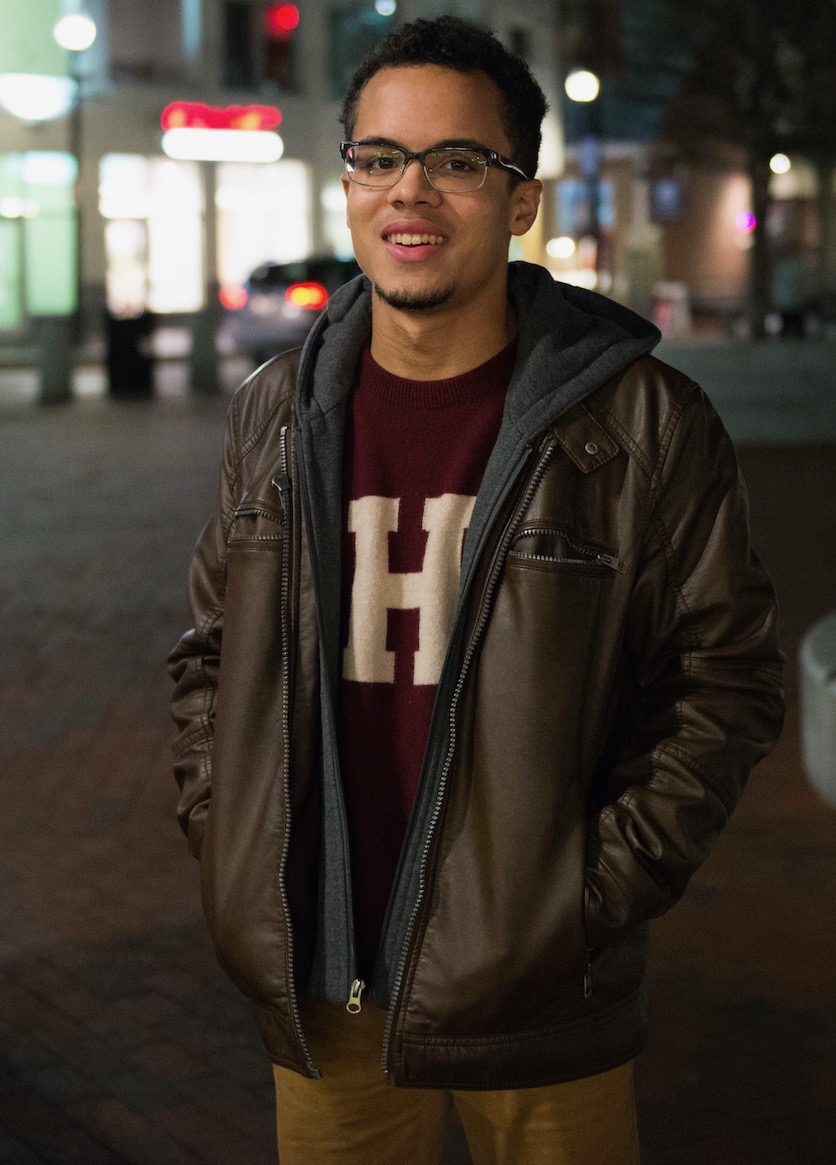 I gape. Guinn smiles. “When I started to find my voice, I enjoyed making absurd one-liners,” he says. “Things that aren’t true and don’t make any sense... Of course I’m not going to cook a cat! I’ve never tried cat.”

His comedy career may have begun with “absurd one-liners,” but today Guinn is a versatile performer. Lately, he’s been experimenting with talking about personal experiences in short story form. “I’m super short, so I talk about that sometimes,” he says. “My doctor, for years, told me I was going to be 5’9”. I’m 5’2”. One year he was just like, ‘Yeah, I think you’re done, buddy.’” Guinn was forced to adjust.

Apparently, this kind of flexibility is crucial in stand-up. “The best joke in the world isn’t going to hit every time,” Guinn says, shrugging. “There are things you can do to figure out whether or not it’s going to be funny or work in certain contexts. For me, and the stand-up club, we write jokes and run them by each other to figure out how we can tighten it—take out as many words as possible and get the same thing across.”

When it comes to workshopping, Guinn knows what he’s talking about. He’s co-president of the Harvard Stand-Up Comic Society and has served as executive producer of On Harvard Time.

Guinn took on the OHT leadership role during the group’s first year working without a studio. “For so many years we had a studio and really solid branding... It was a well-oiled machine,” Guinn says. “When we lost the studio, it made the club change completely.”

Undeterred, Guinn set a goal of increasing the number of videos produced each week, placing greater emphasis on sketches and adding interviews with comedians like Keegan-Michael Key. In the process, the group made some of its most successful “man on the street” videos ever.

Guinn says the experience shaped him. The year in which OHT lost its studio “was definitely a tough year,” but Guinn says he “learned a lot about how to see a project through from start to finish.” He also learned about collaboration.

“I think I maybe went into On Harvard Time as somewhat of a control freak, wanting to write my stuff or direct something and have it turn out exactly as I wanted,” Guinn says. “But it’s always going to be better to get other people’s opinions, especially because you’re not going to be the only person watching the video or listening to the jokes. It’s the same in the Stand-Up Comic Society. I can write a joke that I think is incredibly funny, but it may be that I’m the only person who’ll think it’s funny.”

Guinn has also ventured outside comedy. Encouraged by his grandmother, a retired ballerina, and his grandfather, a retired opera singer, Guinn was a serious pianist in his youth, and attributes his comfort on stage today to “some terrible flops playing piano.”

“I got hardened to feeling like a failure on stage so I’m not really that worried about it now,” Guinn says.

While Guinn’s confidence on stage is key to his success as a comedian, it is equally central to his other passion: beatboxing. Guinn is a competitive beatboxer—he placed in the top 10 in the Midwest Beatbox Battle, and was the winner of the 2015 Boston Urban Elixir Beatbox Battle.

“One of my passions is trying to push beatboxing past being some vocal-percussion, hip-hop art form and turning it into mouth music,” Guinn says. He has worked to ensure that Harvard keeps up with the beatboxing scene outside of Cambridge, working as a student coordinator for the Office of the Arts to host some of the biggest names in beatboxing for a workshop. Guinn also spent eight months planning events for a week-long residency with Reeps One, who he says is “arguably one of the most famous, important, and talented beatboxers in the world right now.”

Post-graduation, Guinn plans to continue sharing his love for the arts. “Right now, there is no notation for beatboxing. I am working with a company called humanbeatbox.com on trying to create a beatboxing archive of sounds and beats,” he says. “I want to spend time with them after college to create this archive to teach beatboxing.”